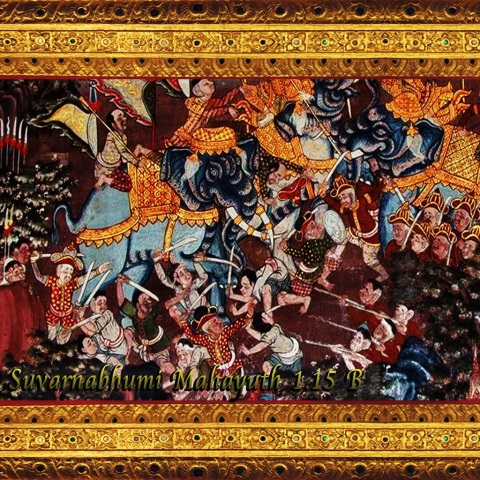 You need to start a new game, this is not save-game compatible.

Install
Download this patch and paste all files to Suvarnabhumi Mahayuth 1.15 mod folder.

Thanks -TC- ,McCoy! and Perisno team for the solution.
Read original post

Freelancer (Modified version) :
-You are not able to hire your own troops and mercenaries while you are enlisted in a lord's army.
-All equipments provided by the lord shall be returned when you resign but your own items remain.

Patch 1.15B Changelog
- Minor bugs fixed.
- Improve battlefield size and improve realistic terrain.
- Weather (night, rain, fog) has more affects on long-range weapons.
- Can get "Bounty Hunting" quest to hunt bandits for exchange money from Tavern Keeper in every town.
- Can hire troops (Tier 4 faction unit) in every town by using "Ask if any nobles to want to join you".
- Added skill "Hunting-Cooking" (Party skill) to increase party food supplies management efficiency. The skill needs to be used together with Tracking skill.
- Can build outposts and forts. Outposts are able to be upgraded to fort.
- Can execute or persuade prisoners and lords except kings.
*To use execution command, you need to be a vassal of a faction or hold your own faction.
**Caution** killing lords will seriously decrease relationship with all characters in the game.
- Added quest "Treasure Hunt", activated by reading Treasure Map which can be purchased from some traders in the game.
- Fix Spear Bracing animation (press B button)
- Shield Bash ability is now available. A shield wider than 40 must be equipped.
- Added "Flipping coins" with Tavern Keeper.
- Can sell prisoners to Village Patroller.
- Improved Town Marketplace menu.

Known issues
- If you play as a woman, some Vietnamese armor, e.g. Mac Tunic and Le Tunic, make your character invisible when equipped.
- Sometimes the sound effects are not working in towns and siege scenes.
- Explosives can do damage bug to the player although it is far from the explosion area.

Brutal, this mod is going better and better. Love it.