Surprise Halloween Competition / Now you have a chance to win a game called "ZOMBI" In this contest will there be 3 lucky winner! 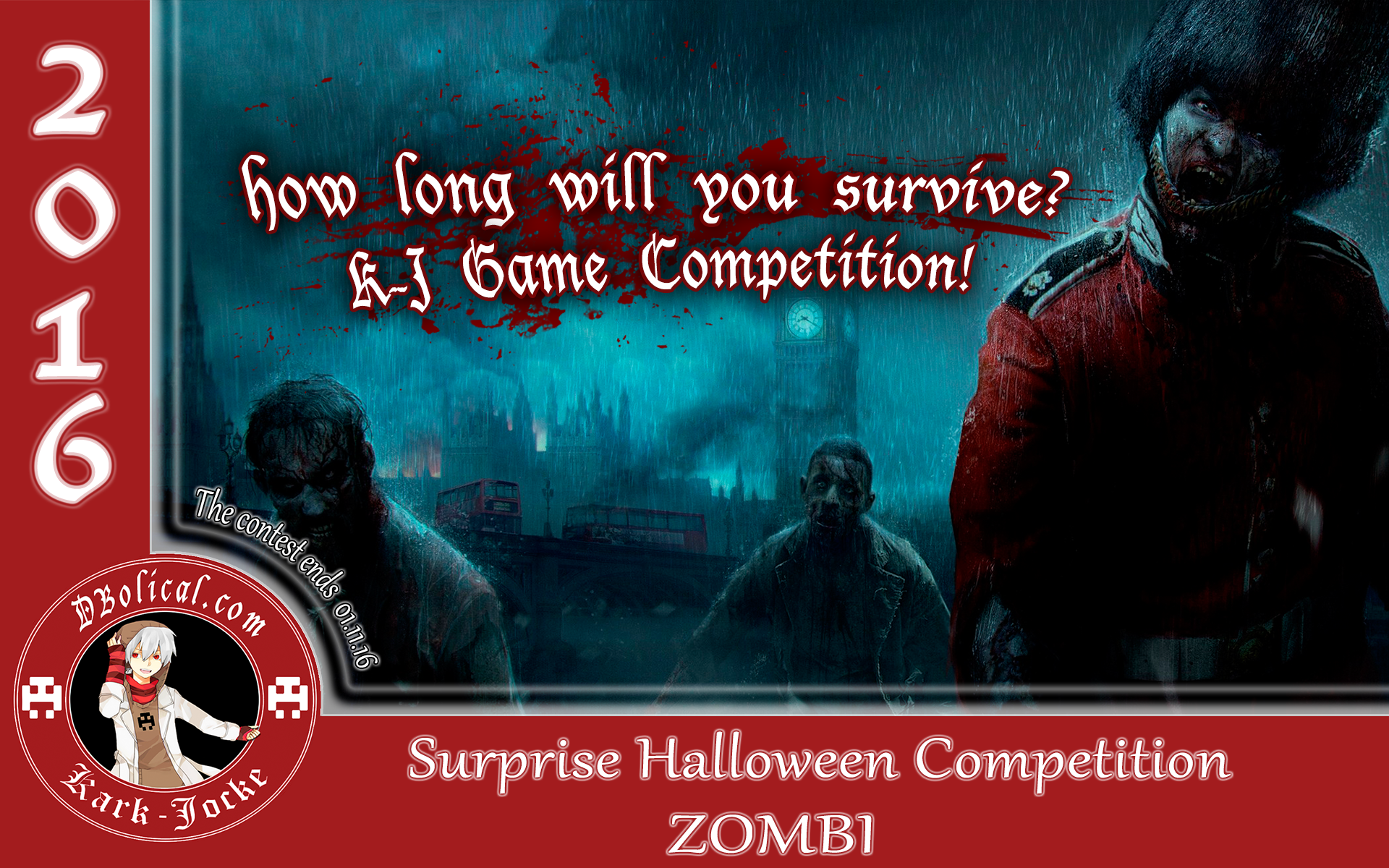 ~ Chance to win a game on Steam called "Zombi" ~

Some info about the zombi game: " This game was called ZombiU long time before it become a PC verison, the game was made from ubisoft to WiiU only in that year. Zombi is a first-person survival horror game set in London, in which the player assumes the role of a random survivor in a zombie apocalypse.

The player collects various items and weapons used to fight and kill zombies that are located or looted from different areas. If the player's character is killed by a zombie (which can occur with a single bite), the character will permanently die and the player will then take the role of another random survivor.

The previous character will become a zombie, whom the player must kill in order to reclaim his original inventory. If the player has Miiverse enabled, it is possible that other players' characters will also appear as zombies carrying the items they had collected. The player can also tag clues and hints onto walls that other players can see when they're on their own adventure.

~ Answer the following questions to win the Zombie game! ~

Since there have been so many who have joined in all of the four other contest, I wanted to make a little surprise contest for halloween itself. So I want to thank everyone who joined every competitions to now and a Happy Halloween to you all!

Same to you Karky!

Question 1: The most scariest game I ever played must be Resident evil 1
Question 2: That must be The conjuring, I was like " S-media-cache-ak0.pinimg.com " when I watch it. I never want to see a movie like that again, too scary O_O

1) Condemened: criminal origins, if you ever thought a beat em up could be scary try making it first person and have a really disturbing story about a serial killer serial killer (i didnt double type that, thats what i meant).

2) Stalker, i saw it because i heard of its realation with the game of similar name, but even though it wasnt a horror movie, the athmosphere always made me uncomfortable, even though nothing horrible happened ever

1. Cry of Fear. **** man this game is the closest thing to giving me nightmares in years. The wild, vivid, insane, and grotesque imagery is definitely nothing to sneeze at and it has some of the best usage of jumpscares. The first time I played it and the head at the very beginning popped up I actually nearly cried. The game does not hold up either, because so many of the enemies are so strange. The book heads, the flying beds, just wow.

2. Recently, no movie has really scared me at all. Not a single one. When I was younger I was pretty afraid of The Ring but that's about it (SAW and Final Destination was pretty spooky for me too, but that's because I was really freaked out by gore when I was younger). However, some forms of "film" I guess you could say do still spook me. Various different YouTube series, such as
-HOOH-:[EVERYBODY-SCREAMS-IN-THE-DARK], nana825763, This House Has People In It (Not specifically for the actual video but everything else behind it is rather creepy), of course Don't Hug Me I'm Scared, Hey Kids, and finally runforthecube. If you couldn't tell, most of this is related to Night Mind and yes most of this I did find out through him. Which one has scared me the most? I'd say it's a tie between nana and runforthecube. Everything about runforthecube is obscenely unsettling despite it not being very graphic or utilizing anything cliches (Such as the way he speaks and their weird voice), while nana takes all the cliches you find in a normal Creepypasta but executes them so well that it's actually really believable that this could actually have happened (like for instance username:666)

1. Scariest game I played is STALKER Shadow of Chernobyl, the game is scary by atmosphere and not by stupid jump scares.

2. The scariest movie Ive seen was nothing because I dont really watch horror as it doesnt interest me as much. Well, not as much as Dark Fantasy.

Question 2: I am not a big movie buff, and therefore have not watched too many movies. Generally, I feel that horror movies fail to be scary because I do not interact within the story. Despite this, 'The Descent' has definitely given me some chills, because I love to explore tunnels, buildings, and mines, and the movie hits home in this sense.

1) it's named slendrina,god damn scared me as hell
2)friday the 13th

Question 1: S.T.A.L.K.E.R.: Shadow of Chernobyl. The atmosphere of the game always put me at edge. so much so that I've actually swiped at my brothers because i was getting to freaked out.

Question 2: Aliens, It was the first movie i saw by myself in the "horror" department. (I was young) It was.... Terrifying. Nothing ever truly took that position as the scariest to me. (note: nothing in the movies is really scary to me unless i'm watching it at night and by myself anymore)