A lot can change in a month, and with 1 year of development time approaching, it was time to shift gear and bring this unique fleet survival/RTS to life.

This update marks a real shift from focusing on core underlying technical hurdles that needed to be overcome in order to reach this point, as well as a much needed aesthetic overhaul for the UI, ship models and audio design. Key features introduced include the surface scanning mechanic and embark-able ground units which need to be deployed via support drop ships. 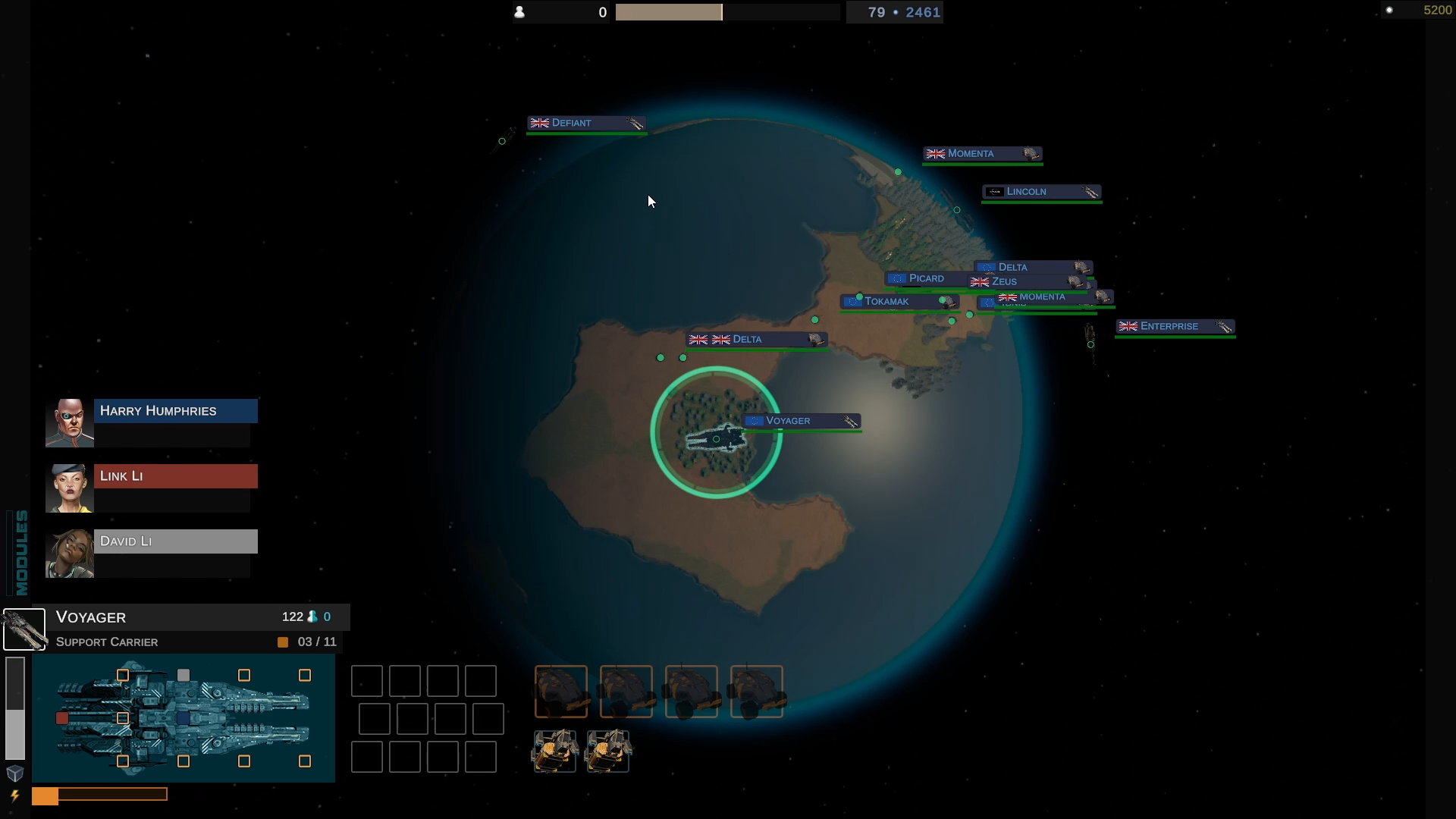 First off, I finally got around to removing those ugly un-textured (!) ship models I had been using as placeholders since the beginning of the project, replacing them shinier versions representing the Support Carrier class, which... err.. carries support units, and the Heavy Transporter class, which has a lot of inventory/cargo space to make use of, but not much in the way of offensive capacity. I've upgraded the engine nozzle effects to make use of some nicer HDR particle/trail FX and even added in sound effects for the engine 'idling', speed changes and some clever use of 'cinematic' sound FX to enhance the system loading/warp-in sequence. 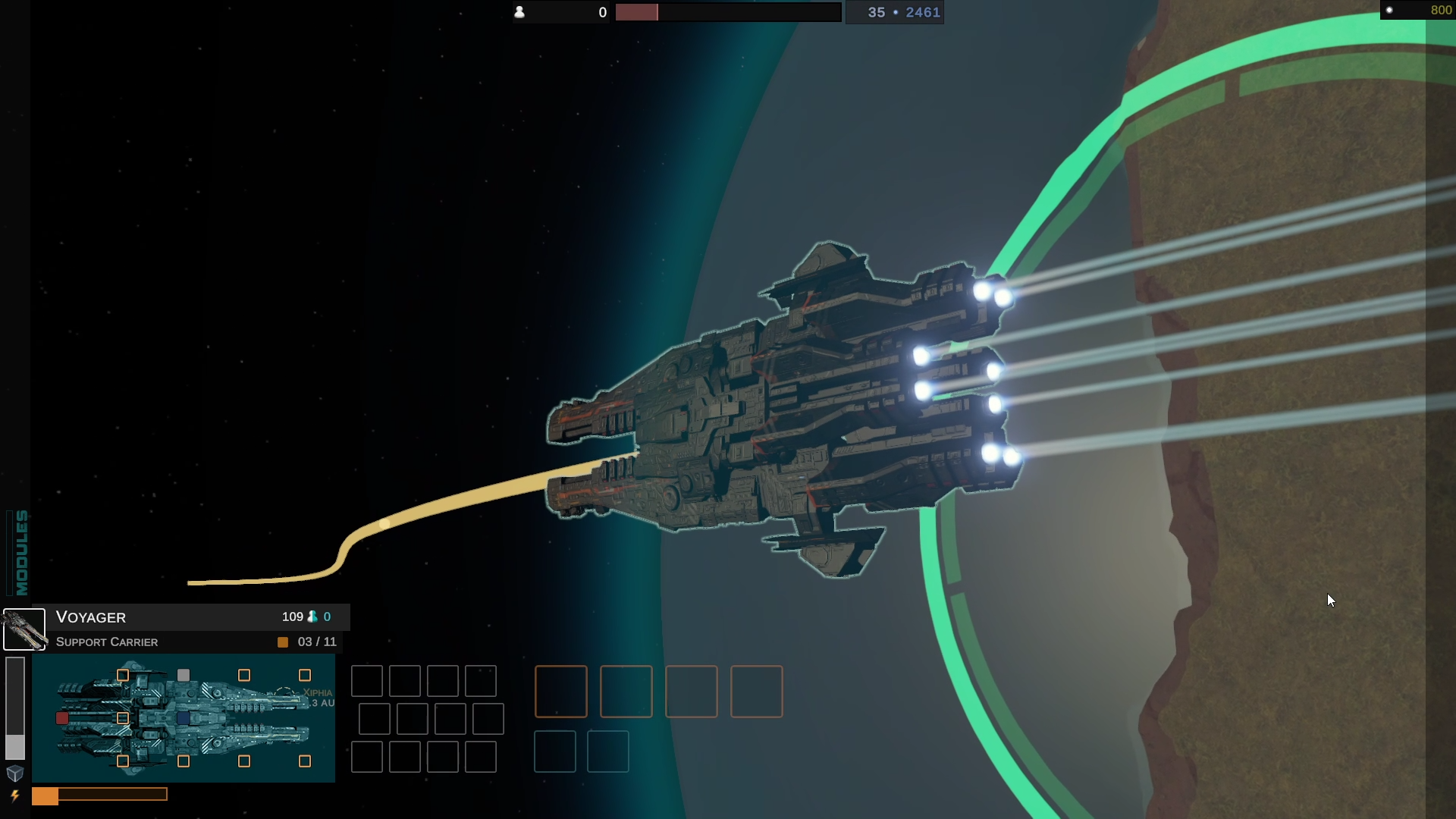 One of the more time-consuming processes of the past month has been a rethinking of the entity user interface. I had originally tried to minimise screen space use to a rather extreme amount, but I began to realise that this wasn't a particularly smart approach to a strategy game. Information needs to be clearer and easy to get to, and tiny little numbers in the corner of the screen felt like a bad design choice. Lesson hopefully learnt.

Coupled with the new ship model imagery, I could now build a modular UI that allowed entity modules to be visually shown where they were located, and to introduce a sleeker futuristic design that kept things simple and adhered a little closer to the games that inspired it (i.e. Homeworld, let's be honest).

Gone is the strict character ability focus -- I've shifted the attention to installing components in each of the 'areas' (modules) aboard the ship/unit, with each component performing a specific role, such as the Ion Drive allowing orbital movement, the Sensor Array providing access to surface scans on the Command Deck, and the Docking Control facility allowing for a certain number of ships to be docked and maintained in the Docking Bay module. Components can have crew members assigned to them, with the number of crew assigned directly impacting the efficiency with which that skill/ability is performed. Furthermore, each component can register 'stats' with the parent ship/unit, such as Ion Acceleration or Scanning Range, with those registered stats modifiable by other components, leading to compound efficiency boosts through careful consideration of components chosen and crew allocated. Components take up valuable space and have power requirements, so you'll need to plan your loadout as the fleet evolves over time to make the most of these limitations (these volume and power requirements are themselves a stat which can be modified too!) 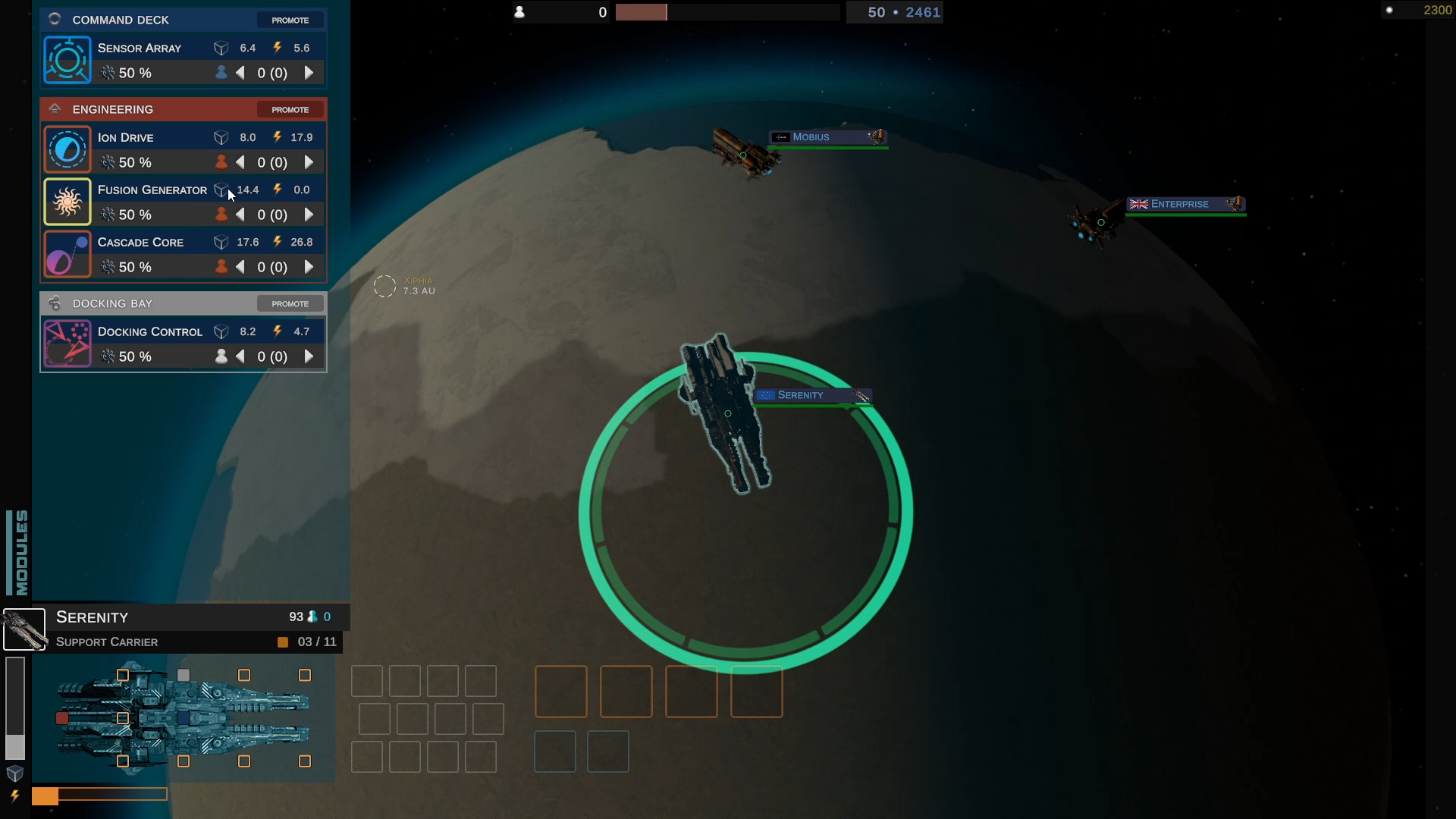 I had been delaying this one a bit because it meant I had to learn how to project images on to the surface of a sphere and for a long time I wasn't sure about the best way to proceed. Alas, this is now sorted, and the green glowing circle you can see in the image above is indicative of the type of surface scans you'll be able to perform on the planets you come across.

In this case, the Sensor Array on the Command Deck provides the functionality to scan for biological organisms on the ground below. This is a continual scan, internally performed as 'raycasts' in a cone downwards with a search radius equal to that displayed by the ring itself. Unlike traditional RTS where things that move close to your units are automatically discovered, the idea here is that you have to direct your scans to discover things, with the scan dimensions adjustable depending on your requirements. Components can also upgrade the scan rate and/or search radius; and having multiple ships scanning the same area of ground actually does make a difference -- you will increase your chances of pinging against an object!

Beyond organic search scans, there will also be technology-based scans and resource scans, with differing scan types requiring different unit-based components to perform. 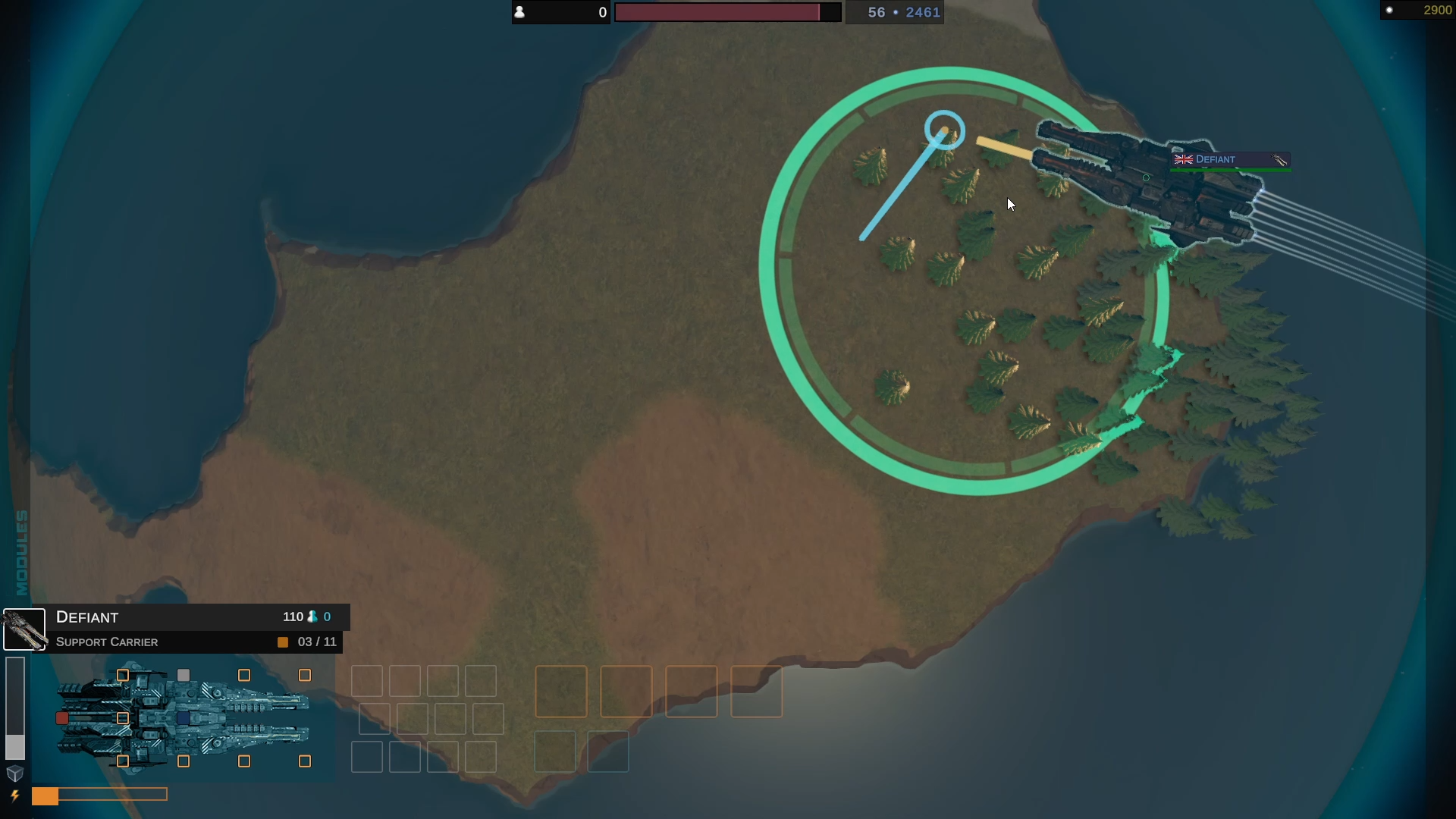 Do you want to live forever ??

Up until now I had been simply pressing a key to place a ground unit on a planet surface, which worked great for debugging purposes, but obviously didn't represent the intended goals: a fleet that has to carry everything that they need from system to system. So as part of the UI revamp, I've also added 'slots' for ground units to occupy on board ships, and further slots for what I'm describing as 'support ships'.

Ground units (and support ships) take up valuable space on your ships, with the Support Carrier principally designed with this prerequisite in mind. The Docking Bay module allows units to be stored, with the Docking Control component providing 4 such spaces, as well as the means to repair and rearm vehicles upon their return. It also allows 2 support ships to be moored as well, which is handy since one of the support vehicles is a Dropship.

The drop ship does what the name suggests: it allows ground units to be deployed to a planet surface (and to bring them back up again, but I guess that could be considered optional depending on your play style..). The docking bay maintains an internal scheduling system that allocates support ships as they are requested (the player doesn't directly control support units), so if you only have 1 drop ship and 4 ground units docked, you'll need to wait for each unit to be carried down to the surface and return empty, get refueled and prepared for the next drop mission before taking down the next one.

Other support ships that will be introduced will be the Shuttle (for moving passengers and Leader characters from ship to ship), the Cargo Freighter (for moving cargo between ships in the fleet), the Repair Drone (which repairs external damage) and probably some kind of Scanning Drone which can do remote scanning sweeps. 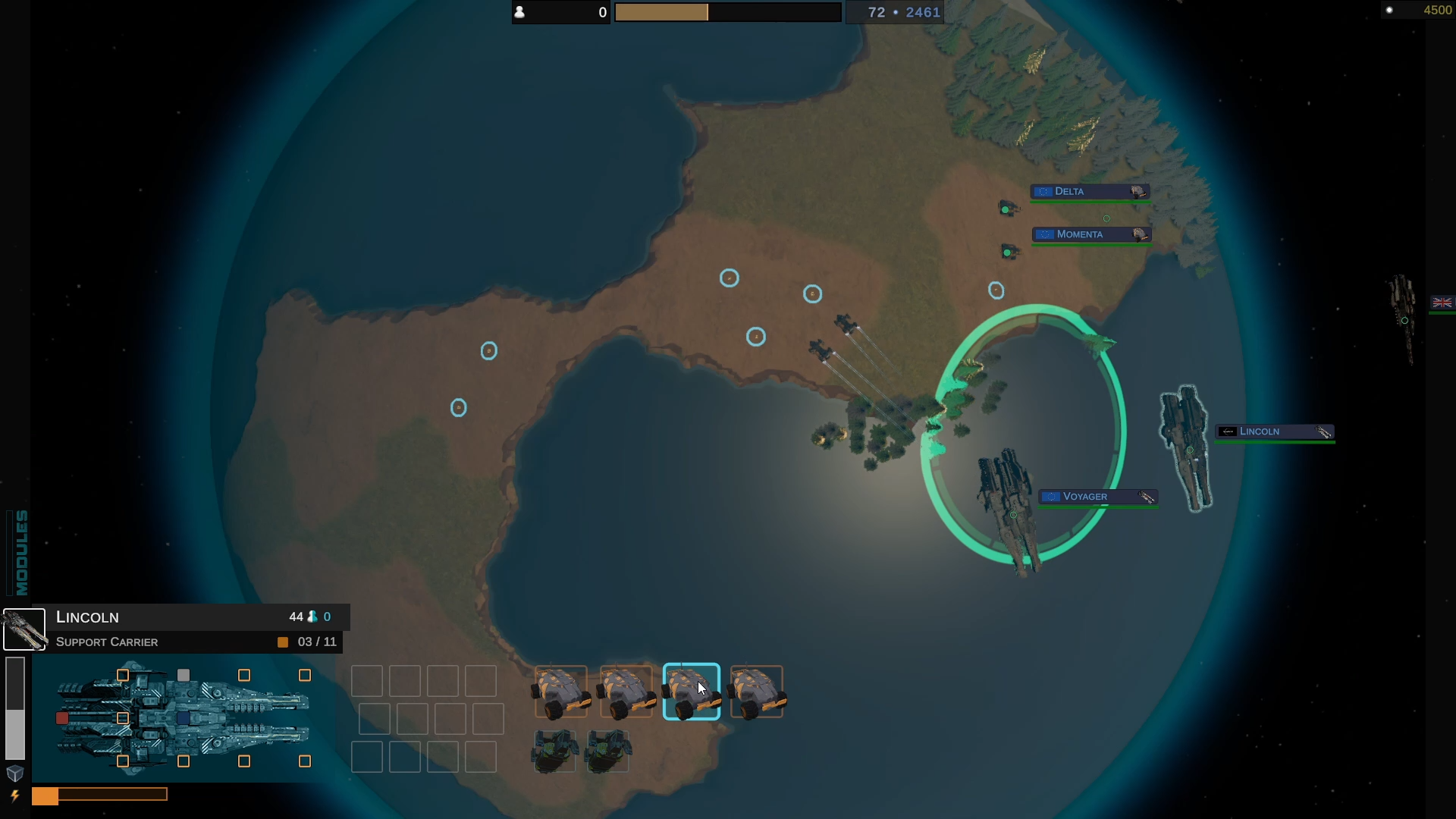 Needless to say I'm pretty happy with how things are shaping up!

Always happy to hear any comments you may have (and suggestions for improvement), and please do check out the teaser video I added to the menu above for a super quick look at things in motion, screenshots just don't always quite cut it...

Thanks for dropping in :)