I've just uploaded v0.35 to Steam and OUYA, which opens up an early build of local split-screen Battle Mode. This has been a much asked for game mode, and even though it's only in its earliest development, it's great to finally have this taster available.

Posted by oneleggedseagull on Jun 16th, 2015

Today I've uploaded v0.35 to Steam and OUYA, which opens up an early build of local split-screen Battle Mode.

This has been a much asked for game mode, and even though it's only in its earliest development, it's great to finally have this taster available. There's two play styles included here. The first is a standard weapon jar battle, where you have 3 hearts and the last kart standing is the winner. 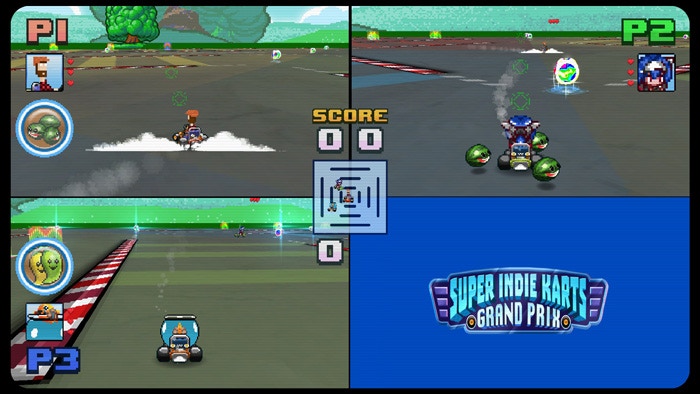 The second is a Fist Of Awesome themed boxing match, which is again last kart standing, but in this mode you can take 7 hits. Both modes are available for 2-4 players in split-screen using a combination of joypads and a keyboard. 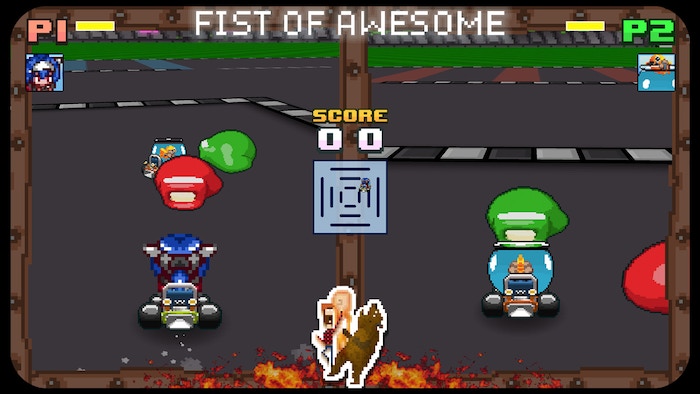 Me and my boy had a lot of fun in this arena here in Seagull's Nest, making up our own off-screen rules, the best was, two player Circle Jousting. To give it a try: P1 drives clockwise around the centre square, P2 drives anti-clockwise, and you try to punch each other at high speeds. No turny-roundees! :)

A couple of updates ago I showed you the crossover kart from Lea from CrossCode, and this month saw the addition of the CrossCode racetrack, the "Rhombus Square Oval"! 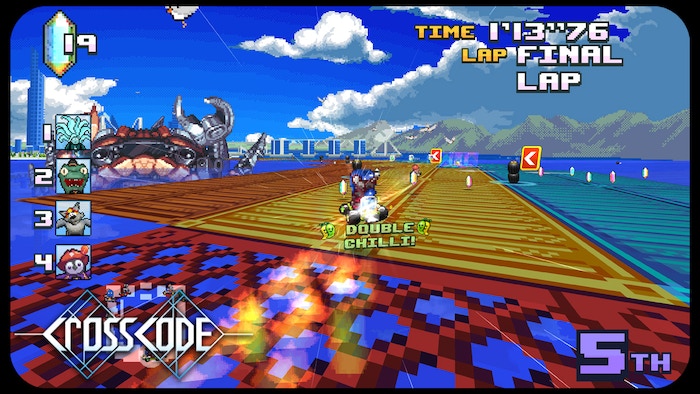 This track turned out so good, it instantly became one of my favourites to play and replay, and has gone down incredibly well with Early Access players as far as I can see from the feedback I've received so far.

It has a lot of water hazards, taking place on floating cargo containers on an ocean, but also has a couple of sneaky shortcuts too. Learning the main shortcut will be essential if you want to get all of the Shrooms in 150cc, as the final Shroom is sitting on it! :D

Check out the video here:

This week (over the next two days) will see the final backer keys getting sent out. So that's everyone in the $10 entry tier. Once they're all sent out everyone who backed the game will be able to get into the Early Access and receive the weekly/biweekly beta updates!

As always, if you think you didn't get your game key email after two days from now, please check your spam box! - failing that, send a little "Hello my friend One Legged Seagull" email to support@oneleggedseagullgames.com and you'll get fixed up asap. Tiers $16 and up have had their keys sent out, and the $10 tier will get their keys this week coming.
If you can't remember what tier you backed at, you can check here.

July 1st will see the final price shift, down to $10 for Early Access.

In the next stage of development I will be focusing on 3 more crossovers I've already begun working with, and then I'll be adding some more tracks to Grand Prix, as well as starting initial work on a splitscreen GP mode, and hopefully another Battle Mode style for the next Early Access update in two weeks time.

Man, wish this game would be part of the steam summer sale. it's beeN a pretty boring sale so far in my opinion.

This is shaping up nicely.