Fire and Reform has 24 factions now, we will add more factions in the future as possible as I can,like some American native cultures and some cultures on the old land.

The main mechanic changes made in this MOD are to reduce the number of villagers while maintaining the economy, increase the effectiveness and importance of melee infantry, eliminate costly troop upgrades in exchange for larger armies and battles, reset data and bonus types, reduce card sets, and more.

The change at art designing is to cancel the upgrade of arms and change the appearance effect, and turn the general arms of different countries into different images with more or less differences, because the time span of mod is relatively short, and the military changes during the period is not obvious, but there are some differences in the appearance of the military between countries.At the same time, the firing effect of hot weapons such as guns is strengthened to imitate the smoke filled effect of gunpowder era.

There are also some adjustments in the game data.Players will see solid projectiles that can cause penetration effects. They will launch several rounds of graupel at a time to attack a large area of enemy's graupel and various rockets. This will bring great fun and new sensory experience to the game. 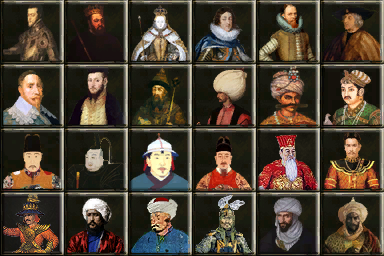 This MOD has 24 factions:
Spain,Portugal,England,France,Holy Roma Empire,Netherland,Sweden,Poland,Russia,Ottoman,Persia,Mughal,Chagatai,Bukhara,Kazakh,China,Japan,Mongol,Korea,Thailand,Myanmar,Vietnam,Morocco,Songhai.
We will add more factions in the future as possible as I can,like some American native cultures and some cultures on the old land.

I beg you with respect, would you like to add civilization from my country?

Namely the Triumph of majapahit kingdom, which had power up to as much as Malaya, Tumasik (Singapore) and parts of the Philippine islands

And there was so much great history in his time, Even then Mongolia numbered 200,000 troops wanted to subdue our nation, during the massive invasion of Asia, Could be spent vanished by Raden Wijaya founder majapahit.

It won't be saved,this factions is too late for our new plan.

I am so glad to see the Crimean Khanate got retained. I study this nation(the Crimean Tatars) in school and they played a significant role in early modern Eastern European history and so many historians in the West ignore.
Thanks for making them an independent playable nation, and all the work you have dedicated in it.