I quit my day job and gave game development a shot. This is the 9 month after that and words had to be written because of that. Here I share some experiences, blow off some steam and finally present my current game POD HERO which is now in OPEN BETA!

I was a Project Manager for the biggest retail company in Portugal and the job was good. I could tell you lots of stories of great adventures and challenges that I lived during a 10-year period in this company. More importantly I could tell you about all the friends and acquaintances I made. They have definitely changed and enriched my life in ways I could never anticipate. This, was a period of great growth and enlightenment. But what I am going to tell is not this.

I am going to tell you about a bug.

Not a software bug, that unfortunately is so common. And definitively not about an insect. I am going to tell you about something inside me that made me feel unease. I always liked videogames ever since I was 10 years old. I remember seeing a console on display in the window of a hardware store, looking at the game, and thinking – that is really cool (the console was Atari, and the game was pong). Fast forward 5 years and I still remember finding a hidden folder on a magazine cd with the demo of the original Diablo. What a glorious day, not knowing what game that was and to my surprise (and my brother's) would be one of the most amazing games we would ever play. Because of that game, a choice would be made in favor of Starcraft instead of Command and Conquer Red Alert. Great days of magic and bewilderment that would be scarcely be found later in life.

This is the bug I was telling you about. How is that certain video games can captivate you in such a way that you feel compelled to repeat the experience over and over again. There is something special here, I concluded. But then proceeded to have a more traditional professional life. And there is nothing more traditional then a project manager I tell you, as a project manager is responsible to make things happen to other people, and, as you can imagine, this profession has been around for a long time. But I digress.

As much as I loved everything I did before, I have unfinished business, a problem to solve, a bug to squash. So I decided to give myself the chance to try and make a game. It is not the first time I attempted that, I have been making prototypes since I remember having a computer. But I never had the time to fully commit to an idea and make a real game that I can be proud of. It was time to do it.

So you might ask, how could you quit everything you have done before and start over? The answer is rather easy I'm afraid: I am having an easy enough life to make choices without regrets. If I had a vast family to support I probably wouldn't have done this, and also wouldn't have regrets. At the same time, the decision to change my life completely should not be glorified. It was not even courage, just something that had to be done. The choice was to keep going as before and risc a soul termite infestation OR follow the dream and risc having to apply for other jobs. Somehow the scale clearly indicated that is was time to change.

Welcome to the grind

Making a game is no easy task. I mean, it depends on the game. POD HERO took me 10 months to finish (to a working beta) working full time. Of course, since this game was my first experience going full time working on a bigger scale project, using new tools (mainly Unity and Blender), I had to spend plenty of time learning. I can confidently say, that if I started today, I would take half the time.

The commitment necessary was surely underrated as well as the time needed. It is different when you experience things first hand and take your own conclusions. In this case, and I am not ashamed to agree with most indie game developer's conclusion – it is hard.

Initially I predicted that I would take 4 months. I know I am not the first one to say it: get your most conservative prediction and double it. So this was one of the many errors that I made. This particular error followed me for all the duration of the development, also because of the expectations of the people that followed the work closely (family and some close friends).

Top five most asked questions during this period:

The definition of fulltime for an Indie Developer is not 9 to 5. It's all the hours you can spare until it is done. And for me it is no use to sleep less, because I cannot sustain that very long. So it is more like a long marathon, waking up like you have an ordinary job, and just do it. It can be a bug hunt (this time software related) and these are very tedious activities, or, it can be a totally creative and captivating task like inventing and designing a new spaceship.

After a while it is fairly easy to loose track of milestones - you imagine a certain game mechanic, a certain game environment feeling but when you test it, it's nothing like you imagined it. It is more like try and tune, again and again. Maybe there are people who get it at the first time… not me. At least not now.

Take for example this ship: 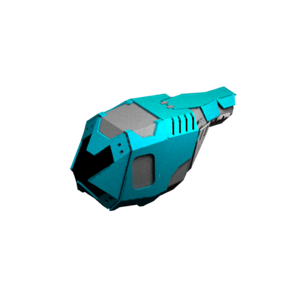 The objective was to make a spaceship or “pod” that had a rectangular shape and sell an image of low tier cargo ship, inexpensive, resistant to collisions and therefore appropriate for beginners.

On the technical side, I had to keep the polygon count low, because this is a game for mobile and it is important to have performance issues under control. Also, since the game will be played almost in isometric view, most of the ships detail won't even be visible during the race. This “pod” is far from perfect but until this version many other versions were designed (at least 4). And it was not because they were not acceptable, they were just not up to par with the vision I had for the game.

You know what is demoralising? To constantly fail milestones you set for yourself. The path is to continue to work hard and advance on your mission, even if at slow pace, but damn milestones.

How about time? Since the onset of the idea and start of the development, I felt a clear feeling that there was an invisible timer that would slowly run out. That is without of doubt the most important milestone –

I had to finish before I lost the will to work on this subject.

And that struggle means I have to be the most human and the most machine I could ever be. How can you beat doing it every single day without losing focus and with the same passion? Every simple thing can be an obstacle. Take for example waking up.

Waking up is like being reborn, it's like all the things that made sense, the motivation of yesterday, and all the thoughts that made me unstoppable were vanished. This has happened a lot before I could fight it efficiently. What I discovered is that for me was necessary a period of catching up and getting up to speed to all the conclusions and mindset of yesterday – exercise, that helps. But I've got to do it. Just do it... Just do it.... aah, the grind...