Some informations about the current situation, like "what the hell is taking you so long??".

Well, I guess its time for a small update :)

Currently, we are finishing the scrin, but since they get quite a bit of new stuff (both, from KW and totally new) it takes quite a bit of time. And while I wont reveal the unfinished stuff, the new Ravanger and Cultists are quite usefull additions, giving the Scrin the manpower they need on the ground to repel GDI and Nod. And rest assured, these little buggers are not the only additions for our alien overlords friends. 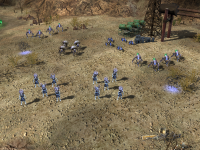 You may also note that we added a Mutant Bus - its based on the CnC4 model, but slightly more realistic. Its quite usefull against light units and can transport one squad of soldiers, allowing them to attack enemys while inside the bus. 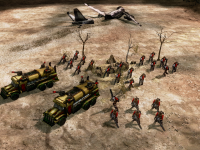 Unluckily, sometimes things dont work as exspected und thus need to be changed or removed. One is the Nod Tunnel Network from TWA 1.6, it has the bad habbit of making the Nod AI crash (even through it should not be able to build it), so it might not be included in future versions.
Another example is the Zone Raider - while cool and well known from KW, their weapons are either total useless or way to powerfull, making Grenadiers and most other anti infantry units a waste of money. Hence they will propably be removed or made unbuildable, depending of what works better.

Hopefully, the next additions will be less problematic ;)

Give the Zone Raiders a new weapon - I'd suggest a Tiberium Flechette Rifle like in Renegade, and have secondary be a toggle to AA rockets like in KW. That should help their niche a little bit.

Tiberium weaponry always struck me as a nod/mutant thing. Going along the same lines, I would suggest a Personal Ion Cannon, but that, like a rail gun, would be another hitscan weapon, and ultimately, just a fancy laser. So, these ideas may be a little farfetched and/or out of canon. A list of everything I've thought of regarding weapons;
Primaries:
Variable Munition Shotgun: Slug for light Anti Armor, Buckshot/Shrapnel for medium-heavy infantry damage. Effectiveness should increase with shorter range if possible.

Secondary/Special Ability:
Javelin missile(Or something like it): The raiders fire a long range anti-vehicular rocket that flies upward and speeds back down at the target. Able to destroy light vehicles and partially damage medium, heavy, and walker. Each use garners a substantial cooldown.

Personal Ion Cannon: Essentially a one shot one kill with a 2 minute cooldown. Zone Raiders are really a unit best utilized with micromanagement, so this is a weapon for just such a commander.
---
With all of those, they'd still have to remain a special ability drop or something, but maybe that'll give you some food for thought.
In hindsight, I kinda like that flechette rifle idea.

agree, nice ideas bad away. But about the ion cannon thing, if those troup were to aquire a such power ability the price to buld a squad should rise. And i like the sonic rifle. In the end, they are zocom troup.

I think coupled with the special ability unit drop idea, and only limited deployments would be fair.

Make the Zone Raiders special ability units I'd say!
(Or make them unbuildable)

great to hear from you

epic i so love your work guys. EA should have kept the cnc 3 engine, the cnc 4 one, give cheesy graphic. anyways very nice work. when is the next release?

how about making them self explosing terorists like fanatic unit ?
lol i m just kidding :)

think about it, it sounds me really funny XD

how about giving them ability to unite with zone troopers so we can create millions of small zone trooper babies and rush with them to Nod and Scrin bases ?

But I agree with the bigger rifles :D, maybe the MG out of cnc4 dont know how is it called ^^

GD10 was the basic infantry weapon of GDI troopers right ?
it really look similar to weapon which is used by EU assault kit users in BF2142 (SCAR 11 AR)

Right, got the 10 mixed up with the previous models, that'd be the variable weapon system in Tiberium.
I think the one you see in C&C 3 is the 8, right?

The GDI Rifle Squad are armed with the GD2, its mentioned in the intel files.

Another possible Idea, Make them somehow upgradable into an infantry squad such as a squad leader so to speak. that way theres only one, and its not too overpowered. Its doable I think, I mean Nod can have upgrades like that right?

A potential long-haul addition to the mod that would fix the Zone Raider problem and add a fresh new layer to the game, setting it apart from the stock game (while keeping it fun) - is to add shielding to some special Nod units. Unlike the Scrin shielding, these portable versions would be designed to combat the GDI's increasing technical prowess. Writing it off as reverse-engineered Scrin technology is easy, as it would not be the first piece of Scrin technology the Nod have used to build their weapons of war. By giving Nod light shielding against GDI's heavy Rail weapons, you could allow the Zone Raiders to fire at targets above them as well. If such was implemented, the Zone Raider would be a far more appropriate term for their unit - being strong quick attackers against unshielded and weak opponents, while suffering if their enemy is shielded against their attacks. It would make their unit into a combination unit, useful when added to a large army of varied units (like Grenadiers or Rocket Soldiers), rather than having an entire army of just Zone Raiders. It's a bit of a long process to fix one aspect but completely removing the Zone Raider is, in my opinion, hasty and unnecessary as well as slightly game-breaking. The Zone Raider is an integral part of CnC3 and I think many people would agree with that. To remove them should only be considered as a *temporary* last resort until something can be thought up to integrate them appropriately.

Can someone please tell me how I update modes because I am sort of new to this ??