As I said before, I'm keeping my head down for a while so I can get some serious coding done.

Posted by captain_deathbeard on Jan 7th, 2013

As I said before, I'm keeping my head down for a while so I can get some serious coding done. So not many updates or forum presence from me, I better give you guys another progress update.

So I'm still working on the big big 0.40 update. In a previous post I talked about the new research, mining, farming and brewing features. Since then, I have added some more stuff.

Certain buildings need power to operate, and this is supplied by your generators. In 0.40 there will be simple generators but in later updates they will consume fuel, which you will either import from other towns or mine it yourself. There will also be an alternative option of building wind turbines instead. This will give you the option of 2 alternative research paths. Wind generators will be less powerful and a less reliable source so you will also need to build batteries to smooth out your supply, but the plus side is you don't have the dependance on fuel supplies.

Generators can break down or be sabotaged, leaving a town more vulnerable to assaults. When I eventually add sneaking to the game, this will give you a good approach for attacking bases.

The AI traders and civilians now actually shop around to buy food and drink in the towns. You can set your own town to be open to traders who will come by and buy stuff.
Also you can buy a building in an existing town now, and open a shop there, or just use it as a safehouse.

When you start a new game now you will have a choice of starting situations. You can start as a retired soldier, who has decent combat skills but is enemies with the Holy Empire, meaning he has to watch his back and protect his teammates.
You can also start with a group of characters and a supply of building materials. This sets you up to start with a base right off the bat, if you prefer the RTS side more. It still won't be easy mind.You can also mod your own in quite easily. Later on I will be adding lots more starting options, like a farming village in the grip of bandits, a slave, a farmer, a group of refugees, fun things like that.

Finally the game will have a proper shadowing system.

And of course, all the new artwork is still coming along, although only the buildings will be in the 0.40 update: 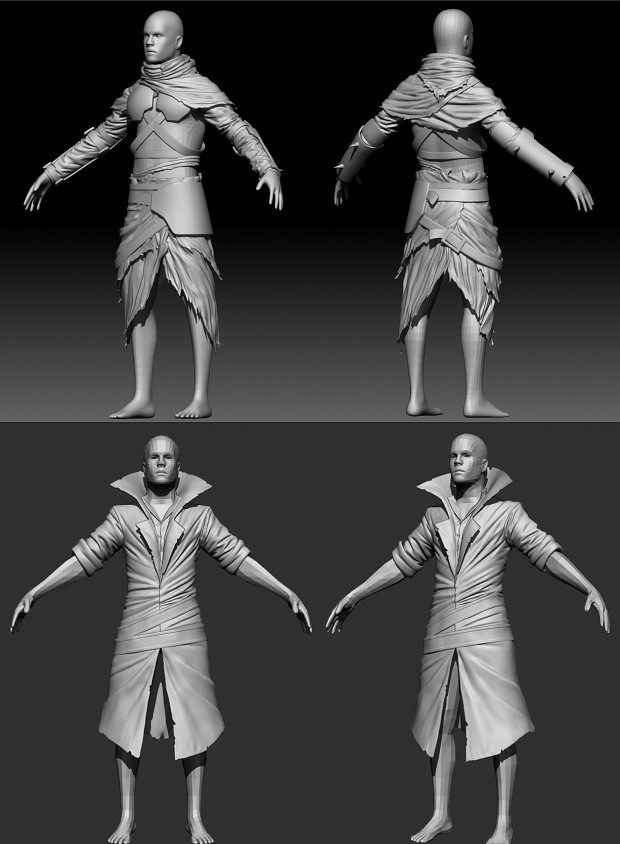 I'm sure you all want an estimated release date, but I'm not sure. It depends how much I want to add in before release, I know people like the regular updates but I work very fast when I take the time out to do a bigger one like this. I would guess around 2-3 weeks from now. I will release a test version first on my forums, which I will call 0.39, and then that will probably give me another weeks worth of bugs and fine-tuning to do.

Great news, we don't mind waiting as long as you keep us updated every 1-2 weeks.

I'm so glad I bought this! This game is getting more and more amazing!

Just bought the game. Cant believe it got me hooked in so much. I was abit skeptical while downloading the demo Next thing i kno its 3:30 am and i was still playing. Reached work late 2day cuz of the lack of sleep. Not many games melt the time away for me like that. Their is something special in this one and i had 2 give my support. Keep up the good work and im looking forward to its completion

Are you planning to return females to the game in this upcoming release?

No, that will come later.

This will make me very happy when the update is released!

Thank you so much Captain :)

awsome thx for the update. keep up the work

I'm waiting. thanks for your work

i got a ******* question, when uptades come, u have to restart like most other games right? :p

I was hoping when we would be able to strike at towns and try to make war possibly.
When you advance further, are you gonna have bandits do coordinated raids on towns, different factions at war with one another and fighting it out in the sands/ attacking one anothers' cities and you could be a part in it. Maybe the bounty system could incorporate bounties from one group wanting a general from another killed. I HAS MANY IDEAS! But I'm not the dev. I like what you are doing with the game though, keep it up.

Dude, take your time. As long as you let us know your still working on it every now and again. We will wait.
This game will become epic.

This is truly an exciting project. I have a love/hate relationship with games like these (early release games) because it is so hard to wait for the finished project, but at the same time I get to help with bug fixes, and even guiding the development of the game itself (if your alpha players hate a feature, then your beta players will likely hate it, too... to say nothing of final release). It is interesting to see a game in this stage. I have given my money to Zomboid some months back and watching it slowly develop is wonderful. I will likely be giving you my hard won cash to help you keep this project going and on track because it has so much potential it hurts. Especially if you open up modding support upon full release. This could be one of the best indie games ever.