Post news RSS Status report for the next v1.0 release

For who not visit the C&C:R forum there will be posted the 4º report of the next C&C:Reloaded release (usually I post them in the Development forum ). It will be a bit like a small resum of the other reports.

As I said in previous reports it will be launched as version 1.0 instead of "v0.99 beta X" (X = number) because is very stable than the last public release, it will not be backward compatible (I removed the cloned power plants AI hack for GDI and Nod from the code & re-designed AI scripts), and will use the future **Ares v0.2 as core of the mod development.

AI is "almost" done, since the AI re-write I haven't included (yet) the Allied/Nod spy missions because I was more focused in improving/observing how AI worked in-game but spy missions can be recycled from the previous release so this part can be considered finished.

I have tested and implemented all the features that will have the next release (see changelog) and the only task left is fixing TS graphics that I haven't done in the last public release. In this case I'm working to finish all the Nod graphics (main standard/semi-destroyed image, animations, build up) that I left without fixing and I'll fix the Civilian buildings that exist in TS maps.
These are examples of what I mean "fixing bad pixels" (due to the resize of TS buildings to the RA2 size, aprox. a ~20% bigger, I don't remember the exact percentage): 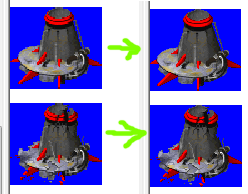 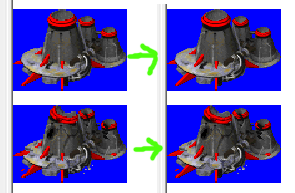 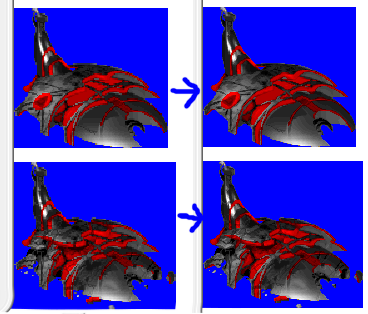 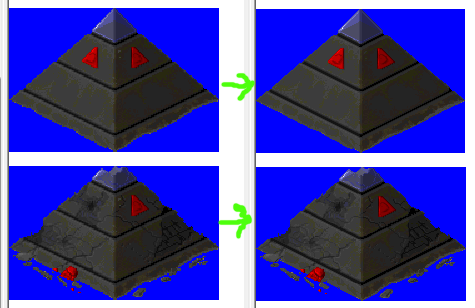 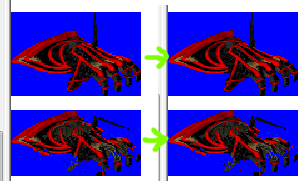 **Ares enables better game resolutions but since my favorite resolution for this game is 800x600 I'm forced to not stop this process ;-)
Because fix bad pixels is a slow & tired process to me there will be other TS graphics that probably will not be worked until next mod releases like the TS terrain and any possible image that I forgot to fix in previous releases.

I'm still not decided about if I re-design the C&C:R mod manager, making it more intuitive & removing the updates tab due to the current internet conection speeds (5 years since the last release... now we have better conection speeds & the mod size has been reduced thanks to **Ares) or if I use the Launch Base tool. I'll wait to the end to see how will envolve this tool before I do the final selection.

I hadn't contact in these months of my french traslator of the mod so I'll release C&C:R v1.0 when it is done and if the future he returns then the french edition will be published :-)

As final note, I don't know when will be the final release date due to the TS graphics (if I'm not wrong, in this moment I'm counting 12 build ups & 4 animations to be fixed the bad pixels). So in a future report I'll indicate when will be published this release and what I'll do for the C&C:R mod manager.
Nothing more to say... happy new year 2011! ;-)

** Ares = Is a Yuri's Revenge expansion DLL, the next generation of binary-based Command & Conquer modding that fix bugs from the original RA2:YR engine and expand it with new features that can be used for enrich our mods, totally transparent for the gamer.

Man I have waited years for this!!!! A couple of years ago I checked the ite every day, welcome back!!!!