I've released the Star wars: Total War DEMO - it's not really as completed as I'd wanted it to be but it's a lot better than the old version. The mod has most of the new Galactic Empire roster finished - but there are still maybe three units missing and the old units are still not removed, the Rebel Alliance has four units - plus a Wookie mercenary-unit in the "Egypt"-roster. The new Star Wars Galaxy map is included as well - it's a huge map with just two settlements. 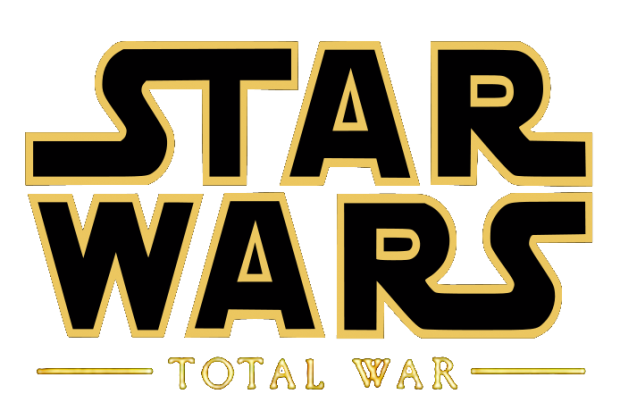 Features of the DEMO:

1. The mod has most of the new Galactic Empire roster finished - but there are still maybe three units missing and the old units are still not removed. 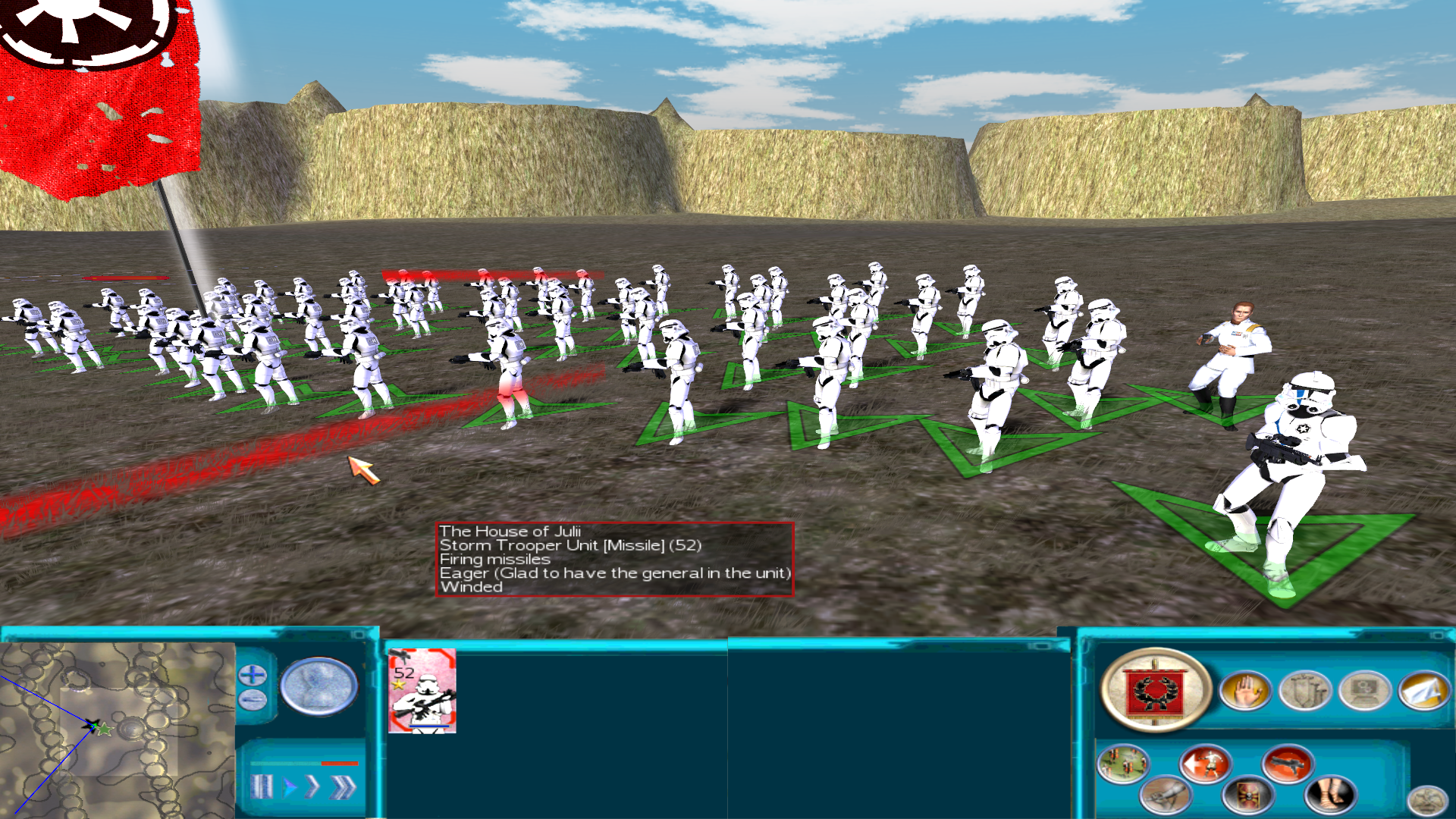 "Dagovax Sirrianus, one of the main creators of the RTW: Barbarian Invasion mod "Total War: 1942", and the creator of Israel: Total War and Holland: Total War- has now implemented new laser animations and a new Star Wars Storm Trooper model to the Star Wars Total War mod from 2009.

He didn't even know this mod existed, but i sent him the link to this page and gave him the idea. Our plan is to make this a mod for RTW: Alexander- as only the Alexander expansion allows heroes like Darth Vader or Luke Skywalker.

The plan is to have it be a custom battle release at first, due to the heavy amount of work required to make an entire campaign with a galactic map from scratch (I do know that it is possible, the Medieval 2: Kingdoms mod "Star Wars: Total War" from 2014 had a campaign map in which the space was actually the water, spaceships the ships, and in which cities got replaced with planets - so siege battles was land battles in the mod. But unfortunately the creators harddrive broke and all his work got deleted which is the reason the mod died.) but if enough interest can be gathered that would be a cool thing.

The plan however is to simply replace the models of the Empire and the Rebels for now, and add new cool animations, fix the UI, quotes, names and symbols. Pretty much polish up the mod and make two factions with good models.

Possible factions later could be the Republic and the Trade Federation. As we have enough material to replace droids and such from the Prequel trilogy as well. But as of right now the focus is the Rebel Alliance and the Empire. 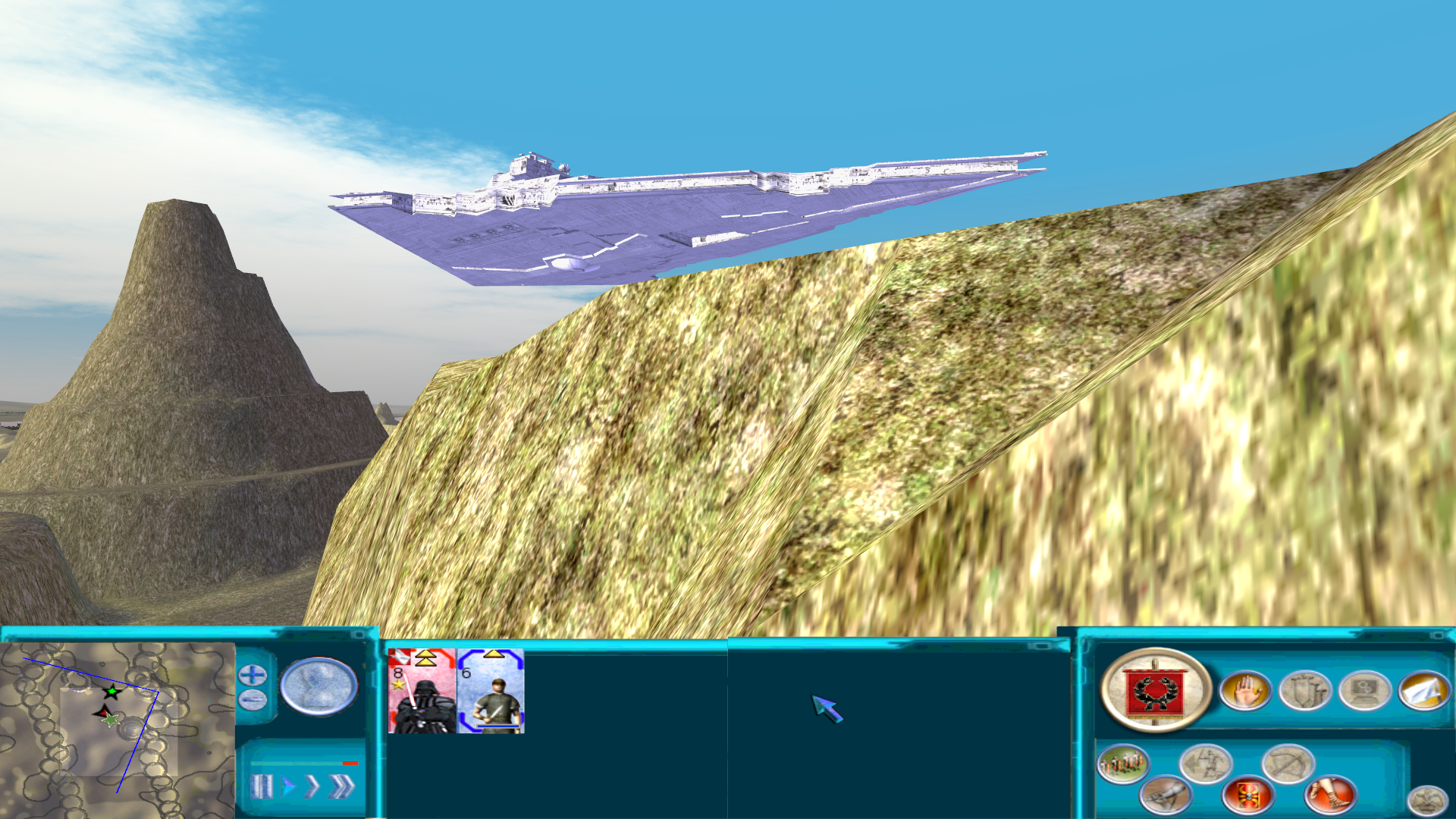 The Star Destroyer on the picture will be re-sized and made smaller, due to problems with using it in this state. It's so high up in the air that you could only see it from a mountain. As such it will be made smaller to work better in the mod, but i still liked the picture. 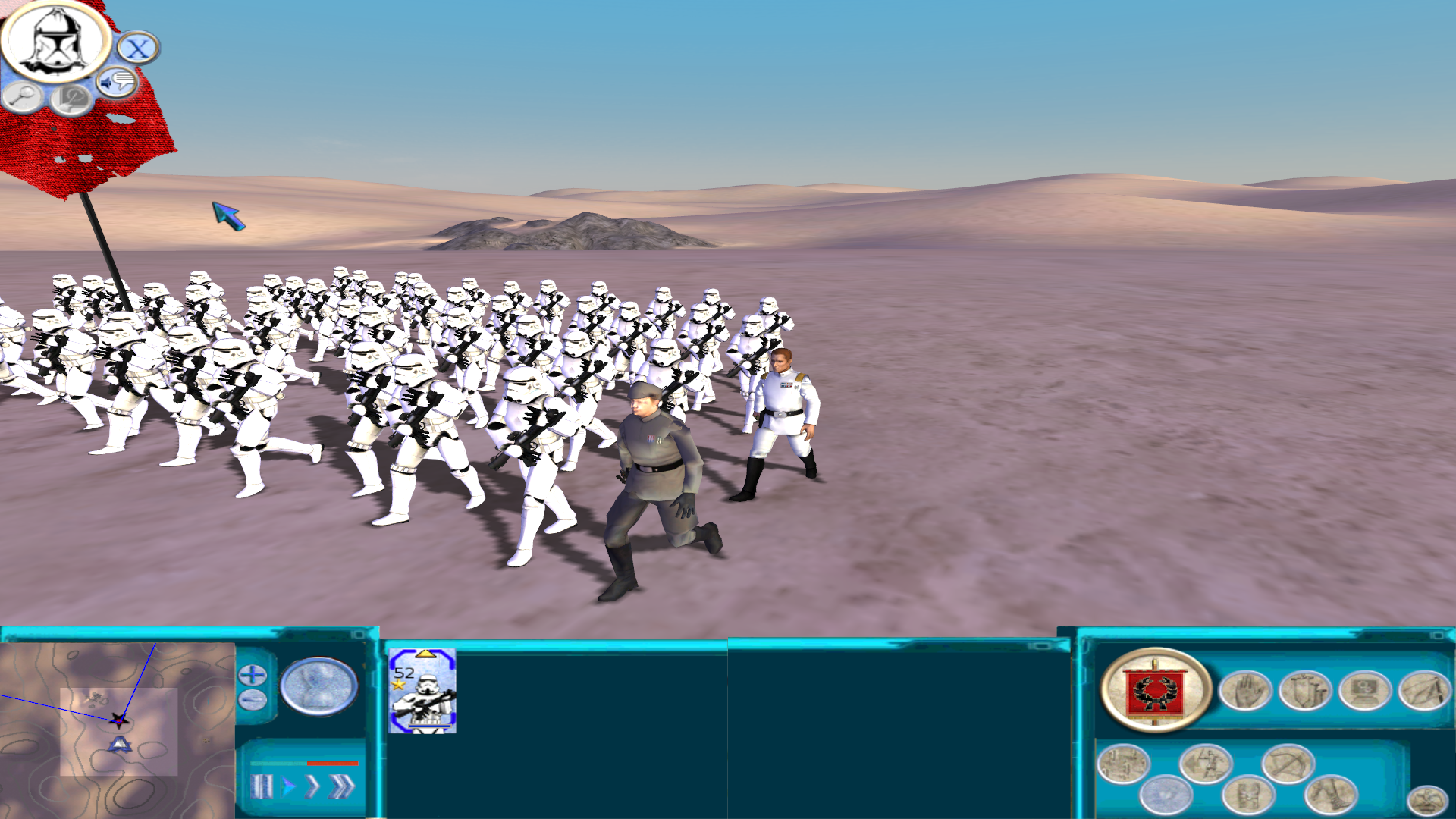 Dagovax have added the Grand Admirals and Commanders of the Galactic Empire. 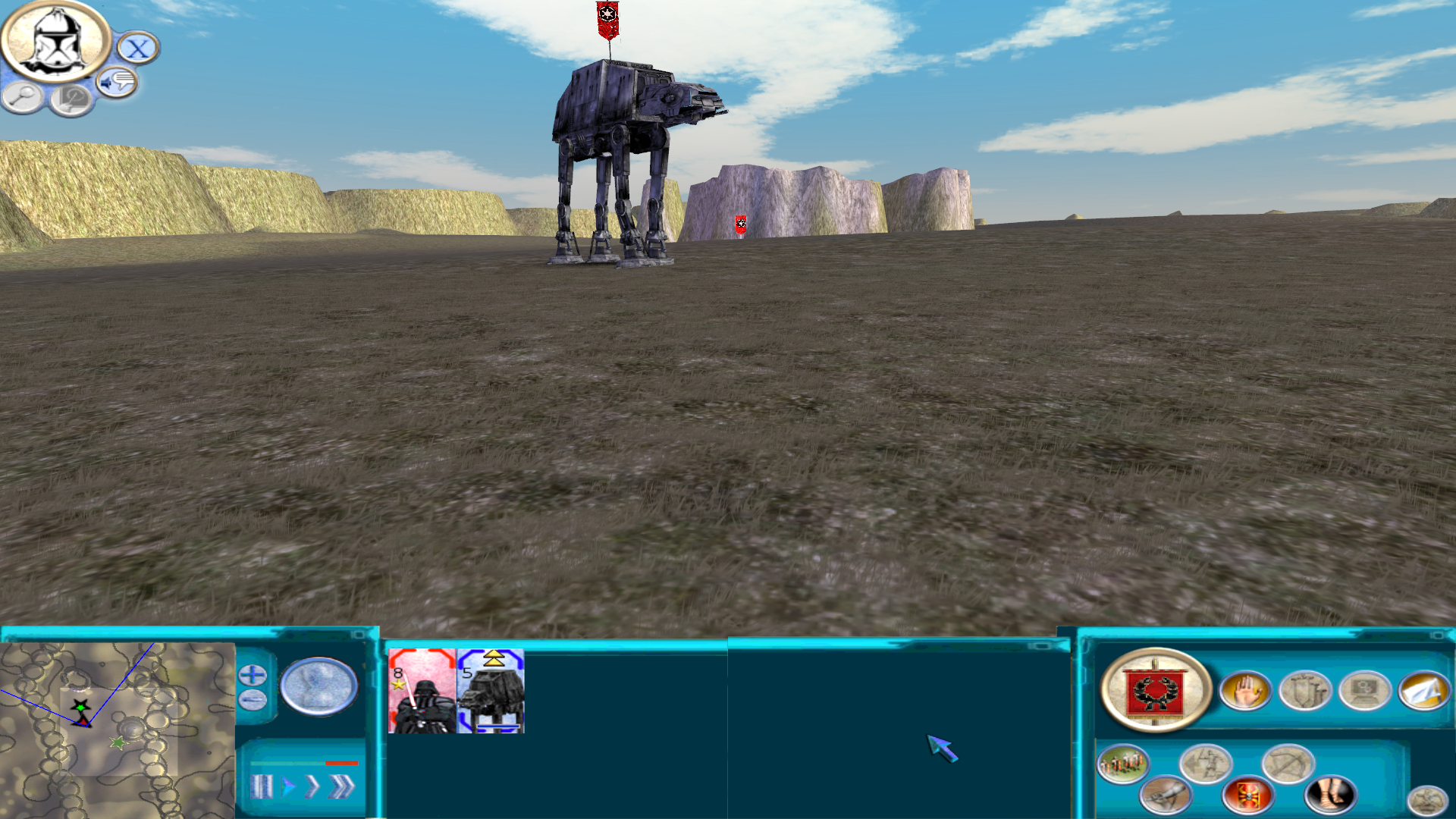 Just a picture of the AT-AT Mech unit. The second or third unit that Dagovax implemented to the mod. He remade the animations and added new bones to the model. 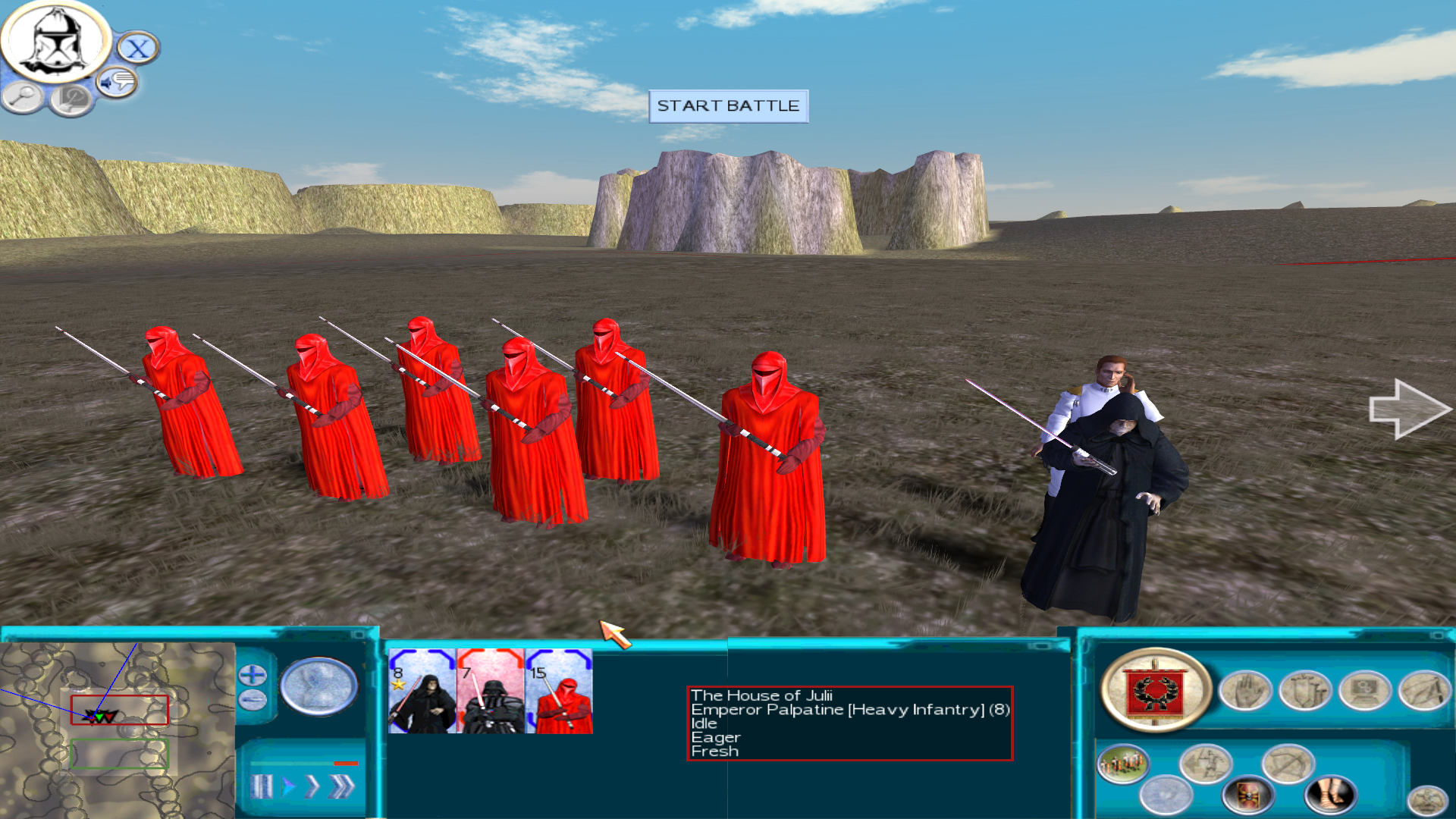 The most recent unit added to the Galactic Empire- Emperor Palpatine himself, using a bodyguard of Red Guards as well as his red lightsaber as his weapon. 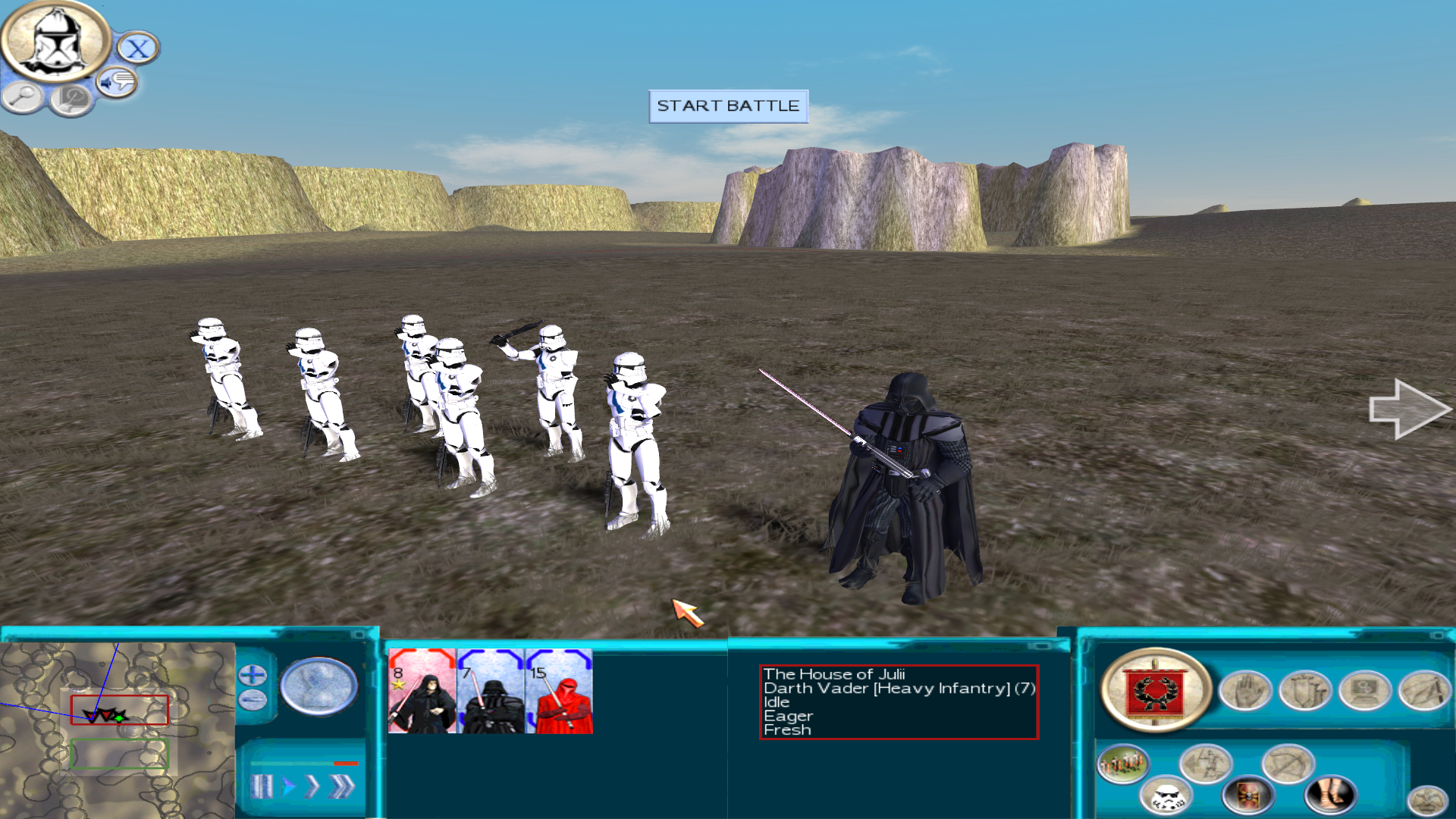 As Emperor Palpatine got the Red Guards/Royal Guards, we decided to add elite Storm Trooper Commanders as a bodyguard for Lord Vader. 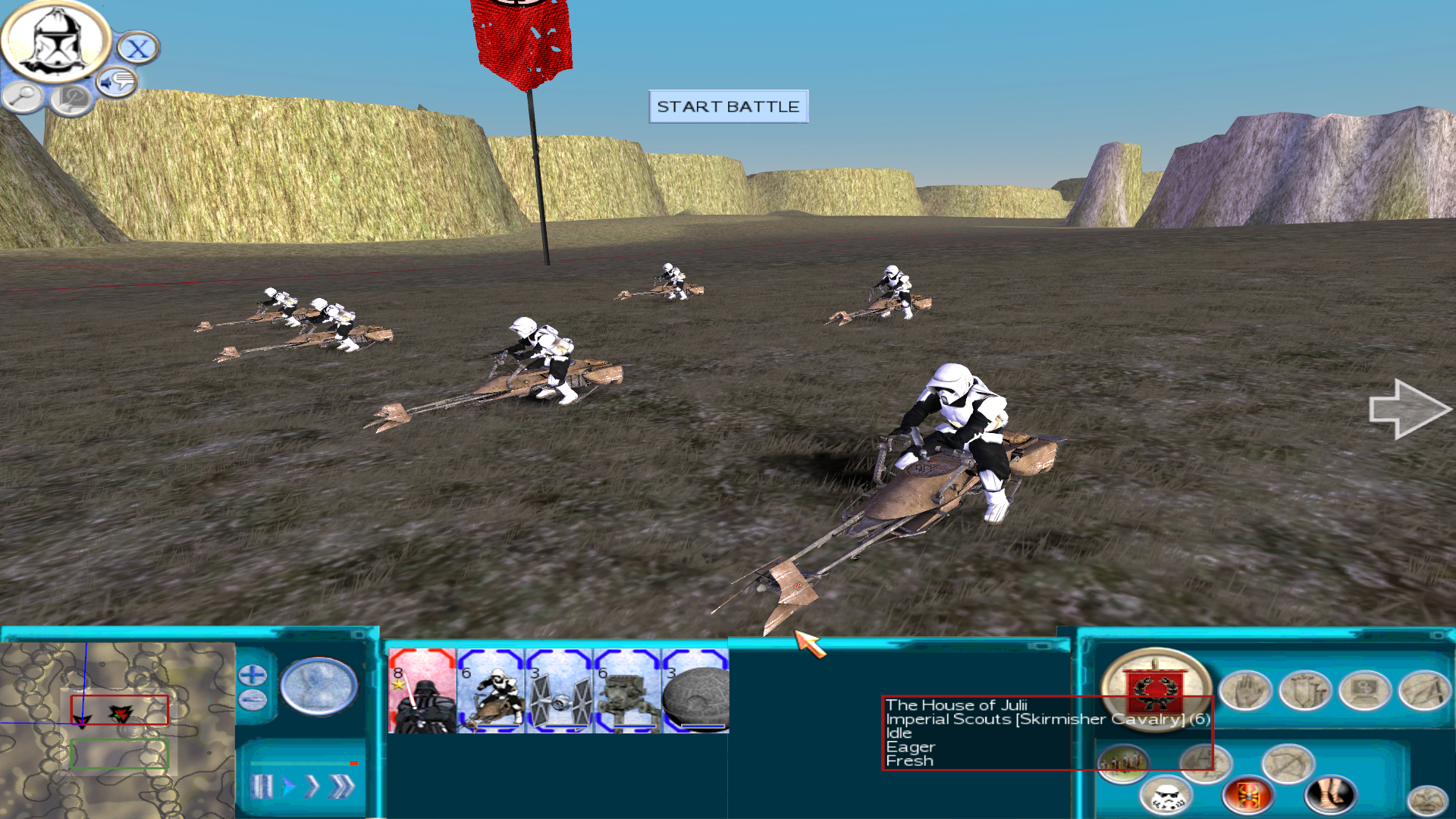 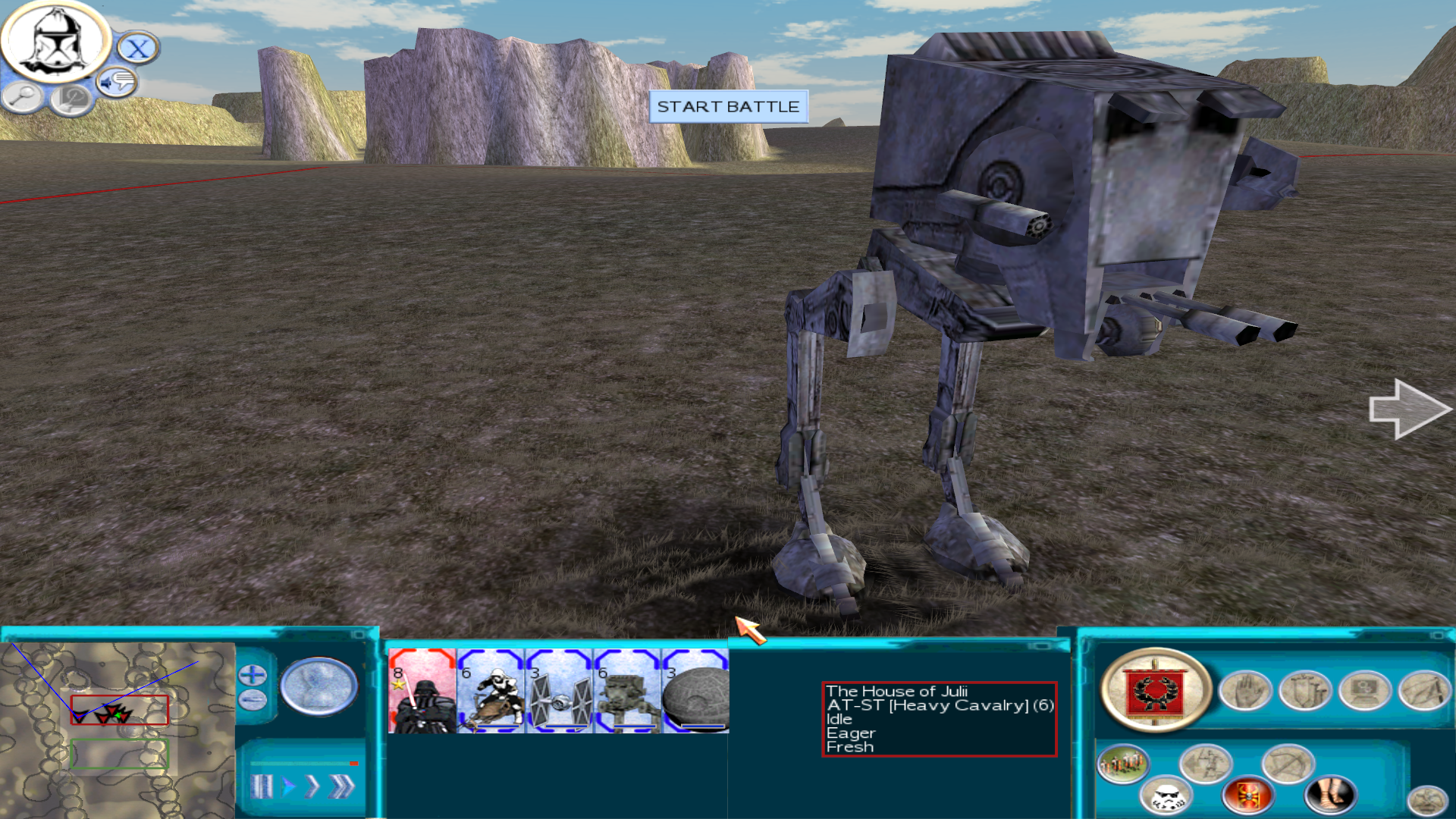 The AT-ST Mech in use by the Galactic Empire, complete with new sound and laser effects.

- The animations are the elephant-animations, so they aren't new- but man do they look awesome when they move! 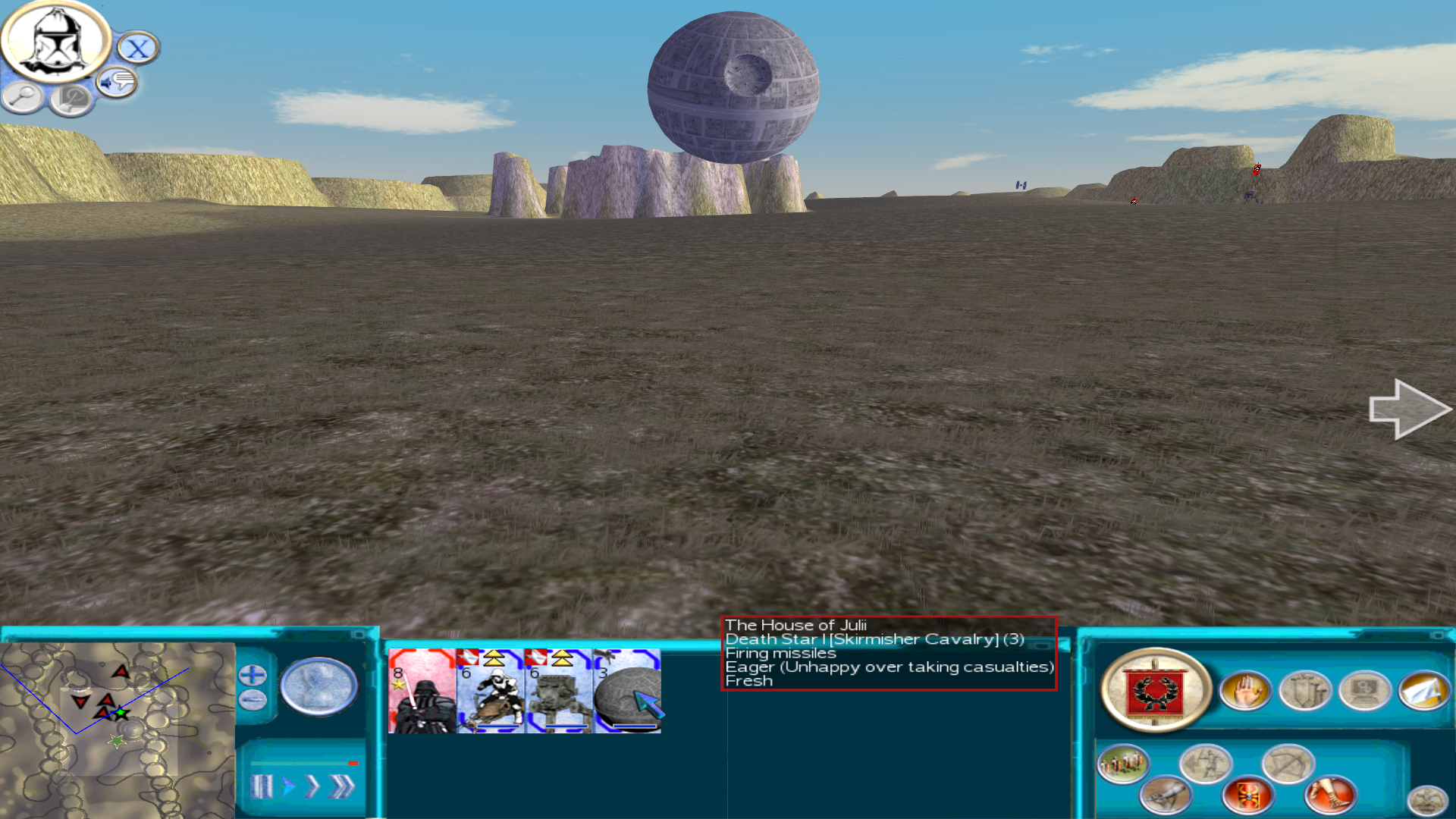 The Death Star 1 from Episode IV (4) "A New Hope" has been implemented with new sound, a new blast etc.

It's very over powered which is the point, but it can be taken down if it is facing enough enemy X-wings or other spaceships. 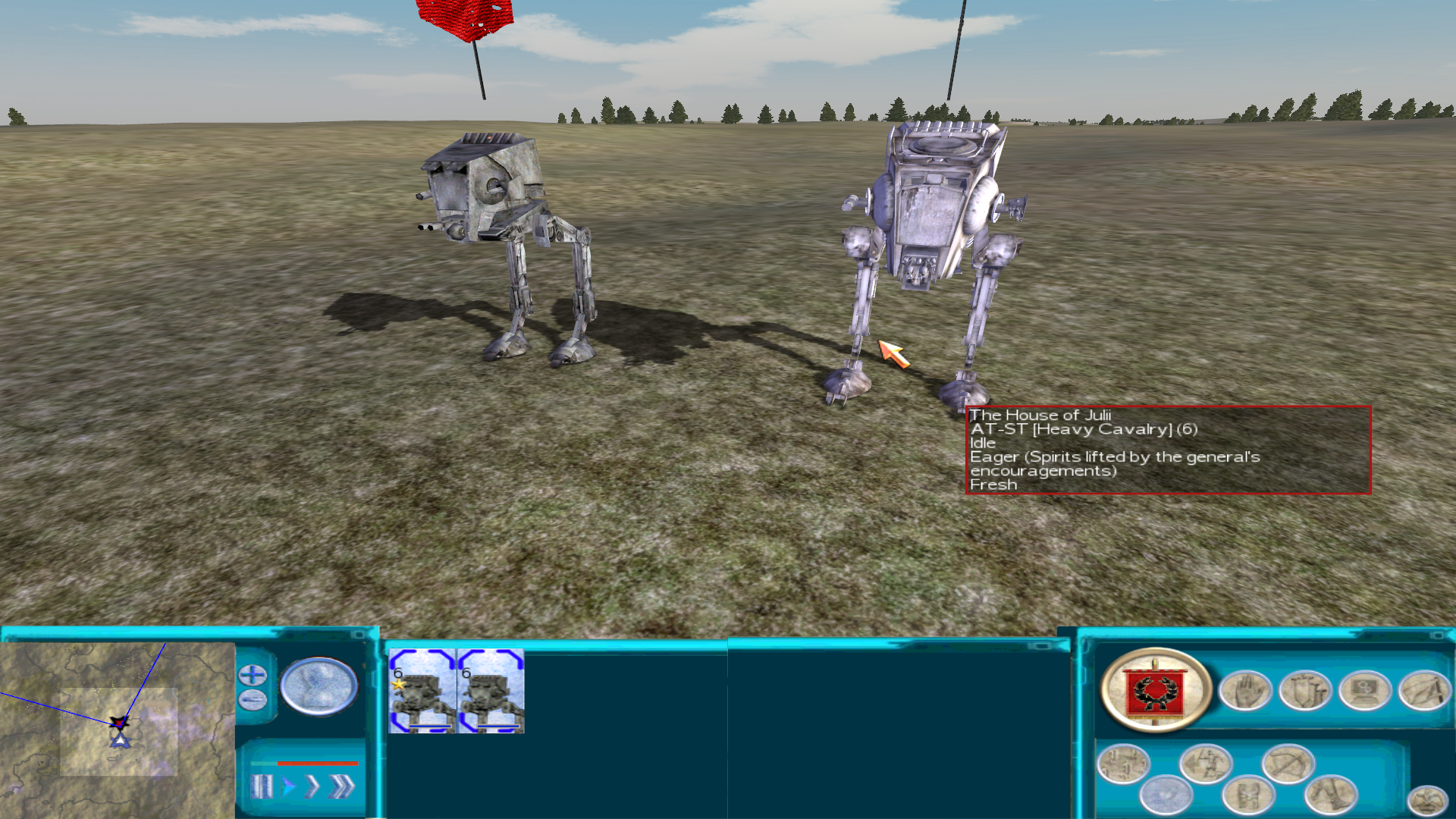 Due to not being able to convert the spaceships and a few of the mechs from the Freedom Force package, Dagovax had no choice but to use older versions of the AT-ST and the Tie Fighters- but a few days ago he managed to install an old NIF-importer (models in Freedom Force are in NIF-format) and hence became able to import the superior Tie Fighters and AT-ST models.

He had by this point already rigged and implemented the two older models, and the Tie has now been replaced with the second Tie Fighter that he rigged- which is much superior in quality to the first one. The AT-ST, while being of higher polygon quality- looked slightly different from the old one.

Due to this situation we have decided to keep both until Dagovax will run out of mount-slots- spaceships and mechs are mounts. And there is a limit of 200 units in Rome: Total War, the limit on mounts being about 50-99 (i can't remember)- when we need the slot he will remove the older one. 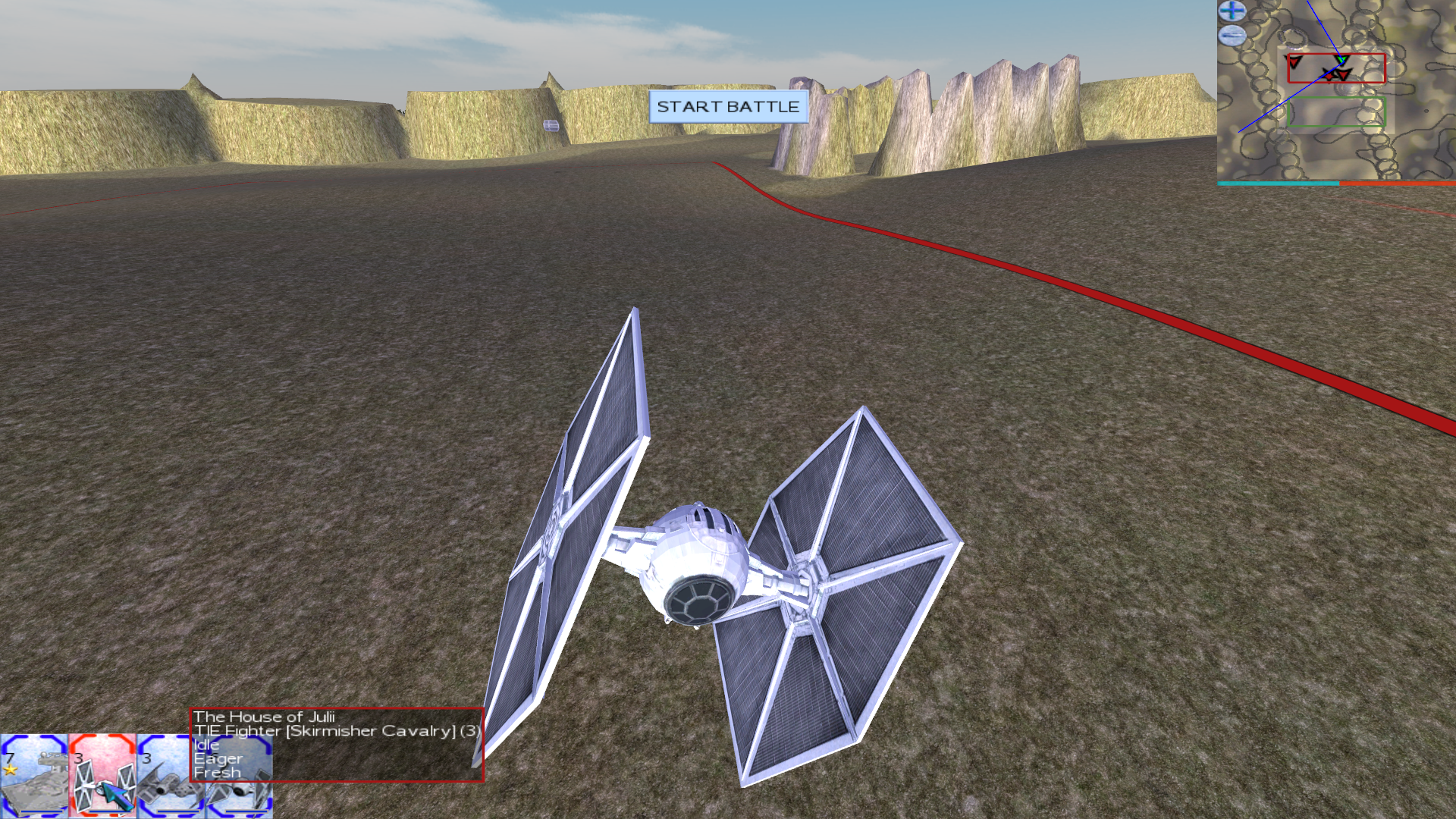 The higher quality Tie Fighter that has replaced the older less detailed one. 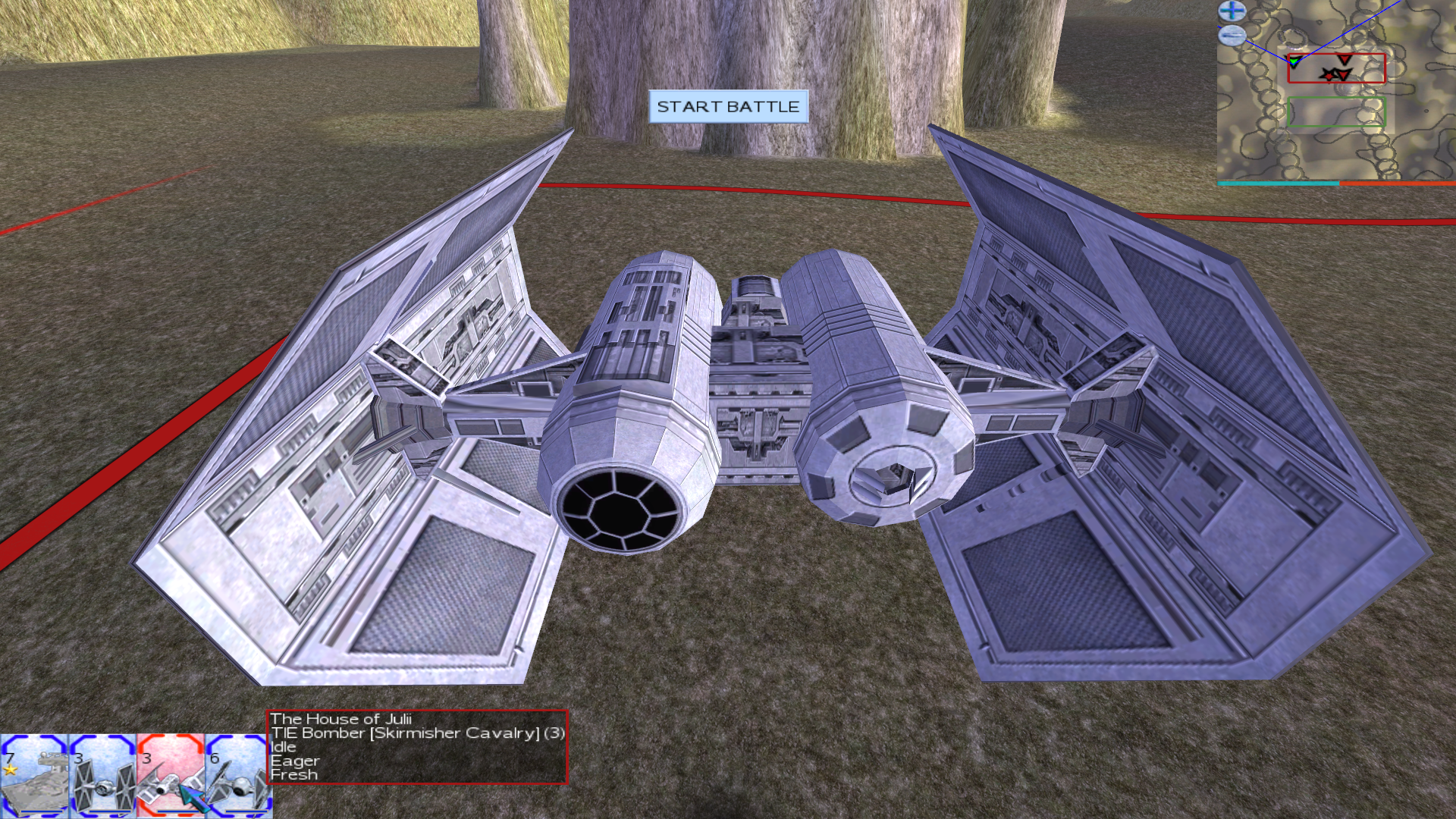 Dagovax have made the new projectile, and added unique sound to the model. 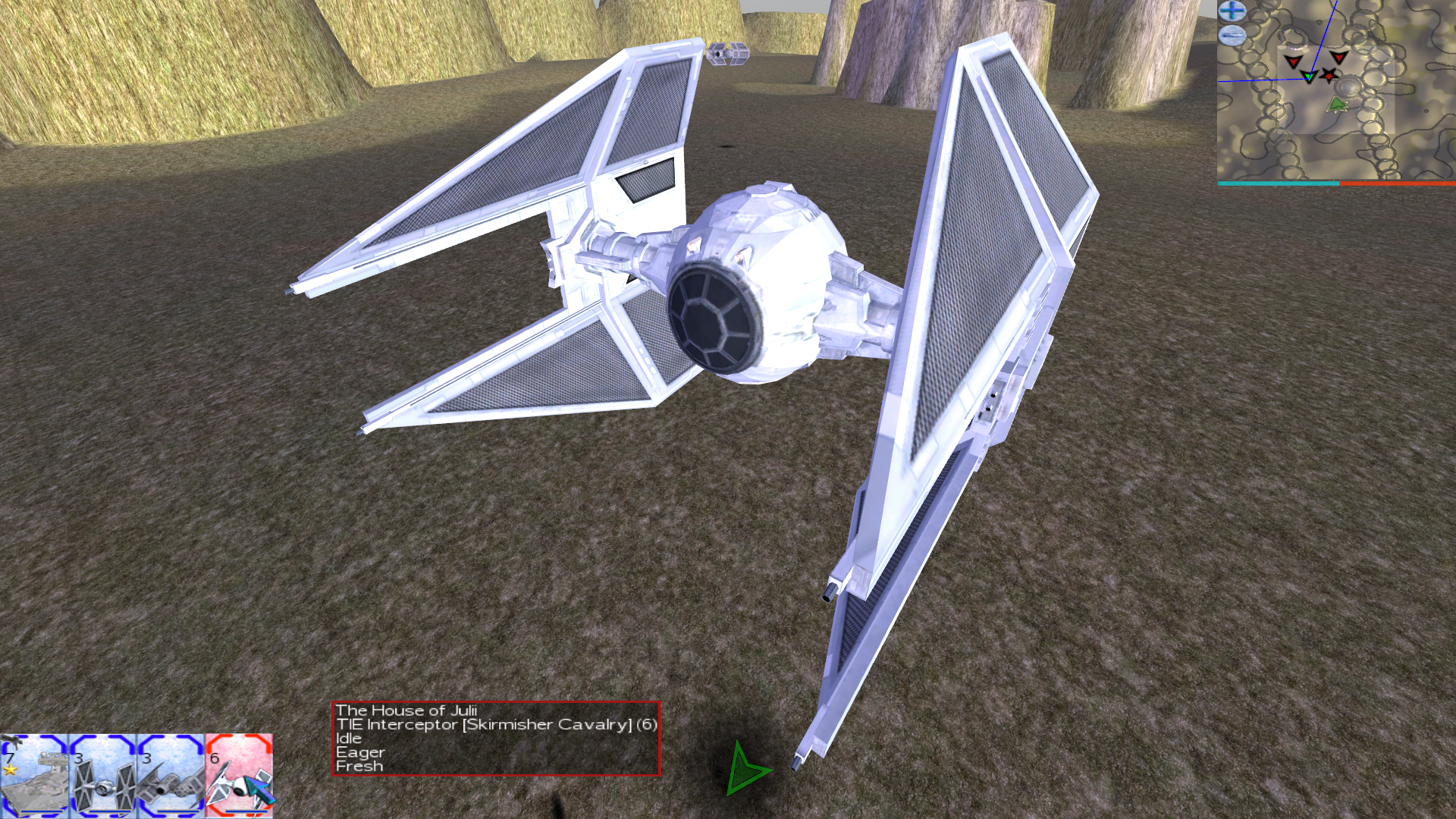 The Tie Interceptor is the superior fighter spaceship of the Galactic Empire. Better than the Tie Fighters, and slightly bigger in size.

Dagovax have added unique sound to the model as well. I haven't tried it out in battle yet.

The Star Destroyer have also been re-sized and made smaller. It's now closer to the ground! But the texture is somewhat off and according to Dagovax it isn't finished- so i'll wait with showing that unit off."

2. The Rebel Alliance has four units - plus a Wookie mercenary-unit in the "Egypt"-roster. It needed to be in a different culture for it's unique sound to work. Cause in RTW sound and music is based on cultures and not divided between the factions. 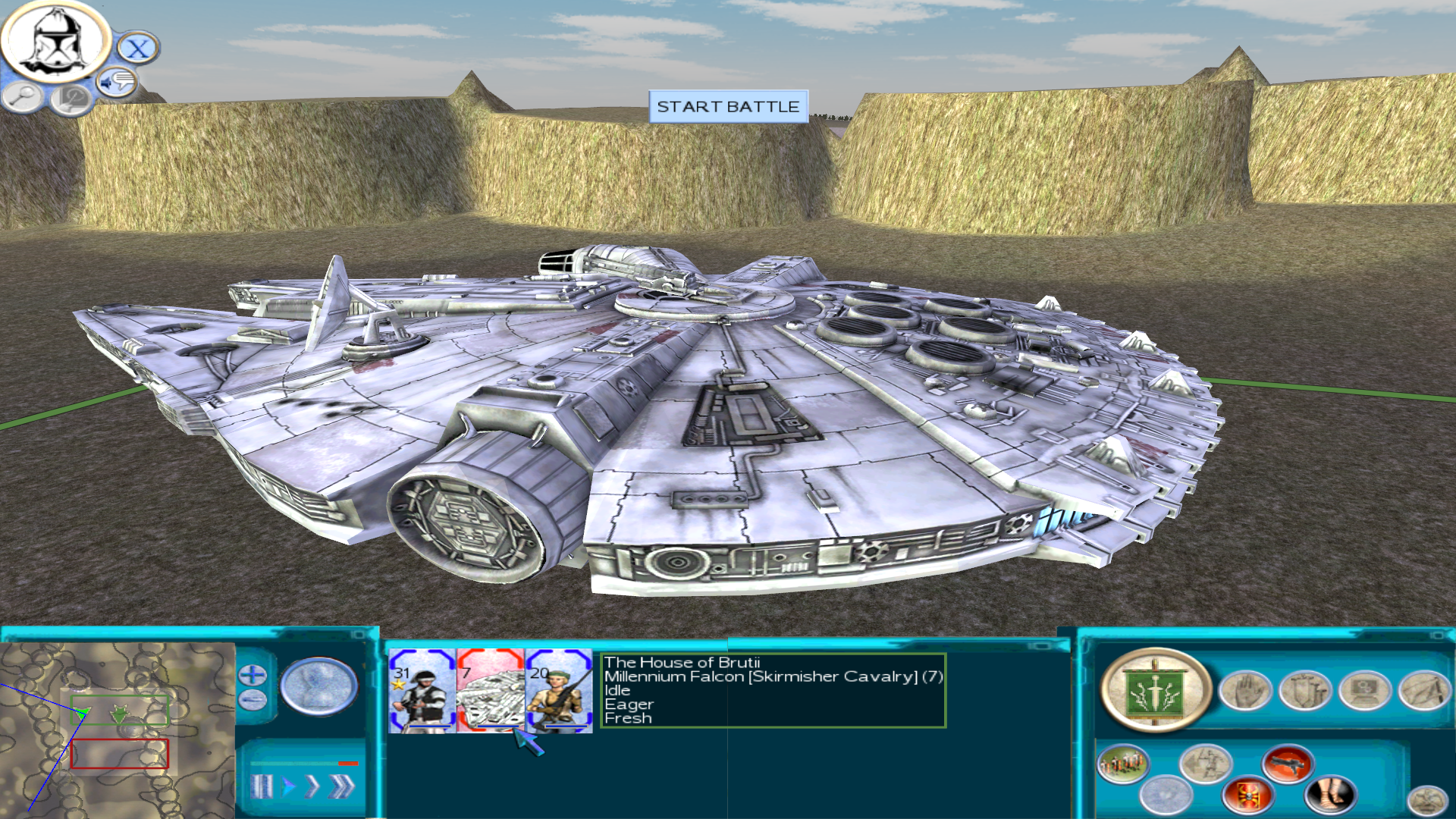 "The first unit of the Rebel Alliance is the Millennium Falcon. 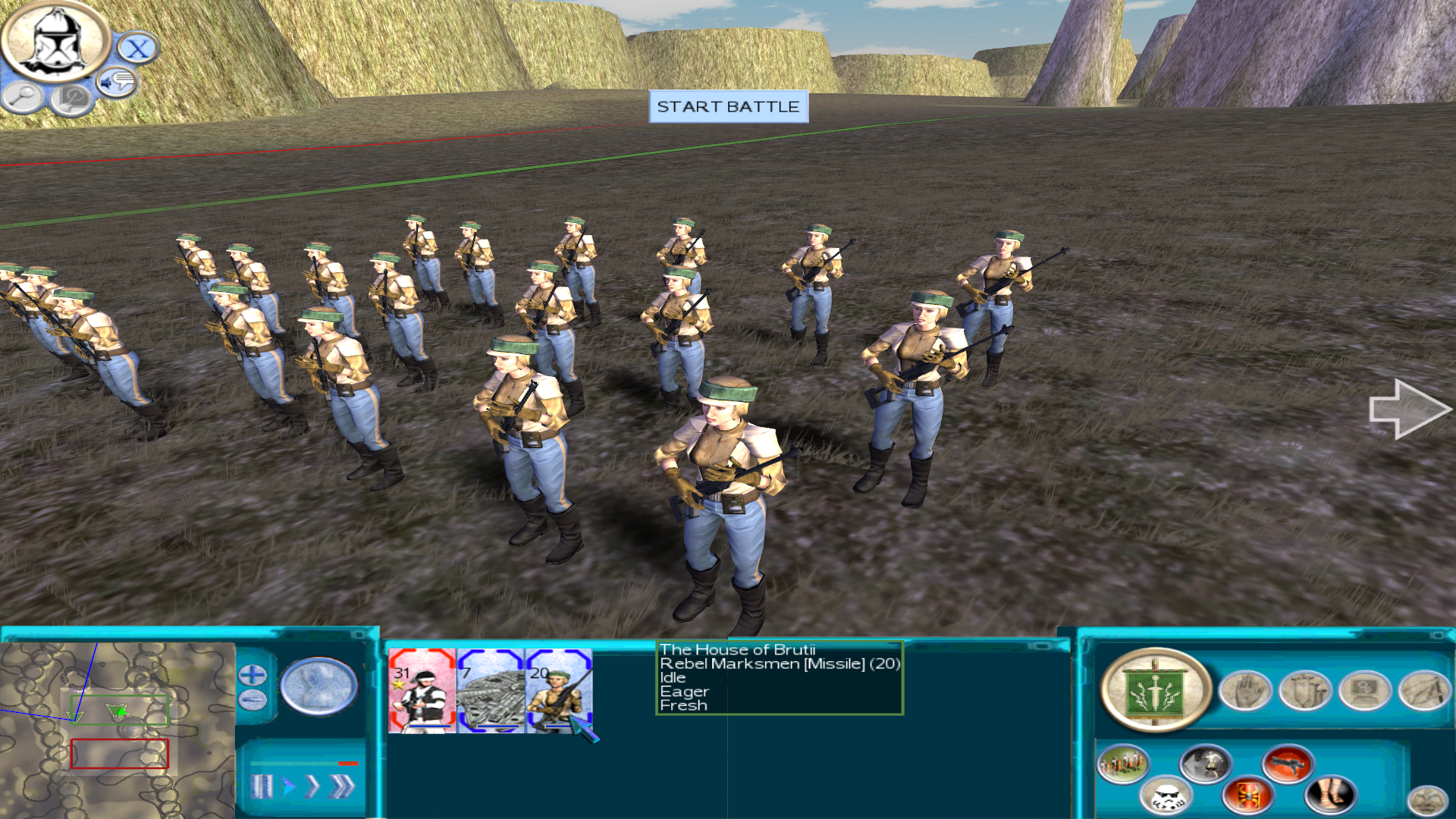 The Rebel Alliance first infantry unit is the Marksmen- women with sniper rifles.

Currently they are like any other infantry, but we are thinking about adding the sniper animations from 1942 to this unit- it would make them much better on the battlefield. 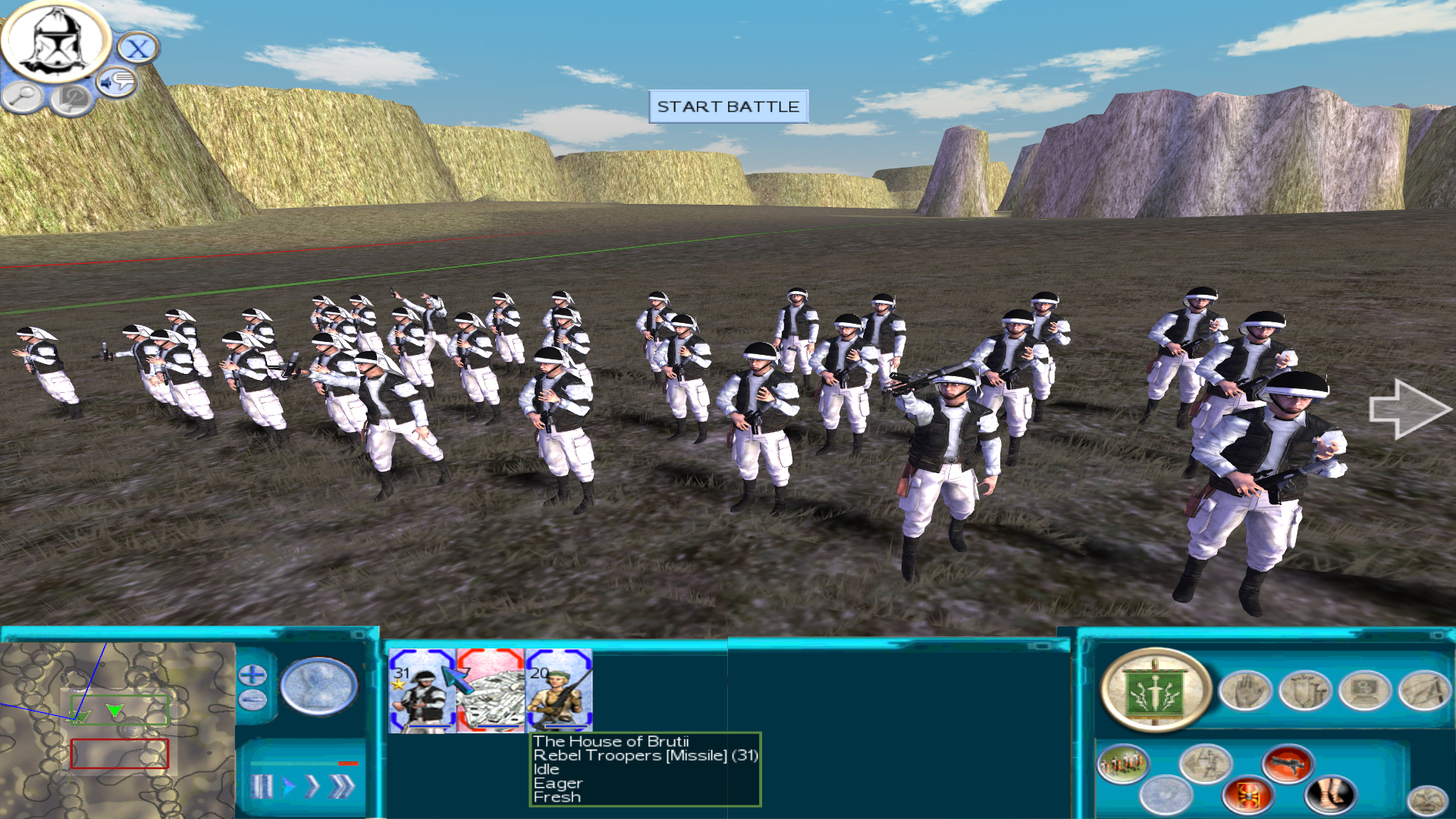 The Rebel Troopers have been added as the regular infantry of the Rebel Alliance- they are the same as the Rebels in Episode IV (4).

The Rebel Alliances answer to the Imperial Storm Troopers. 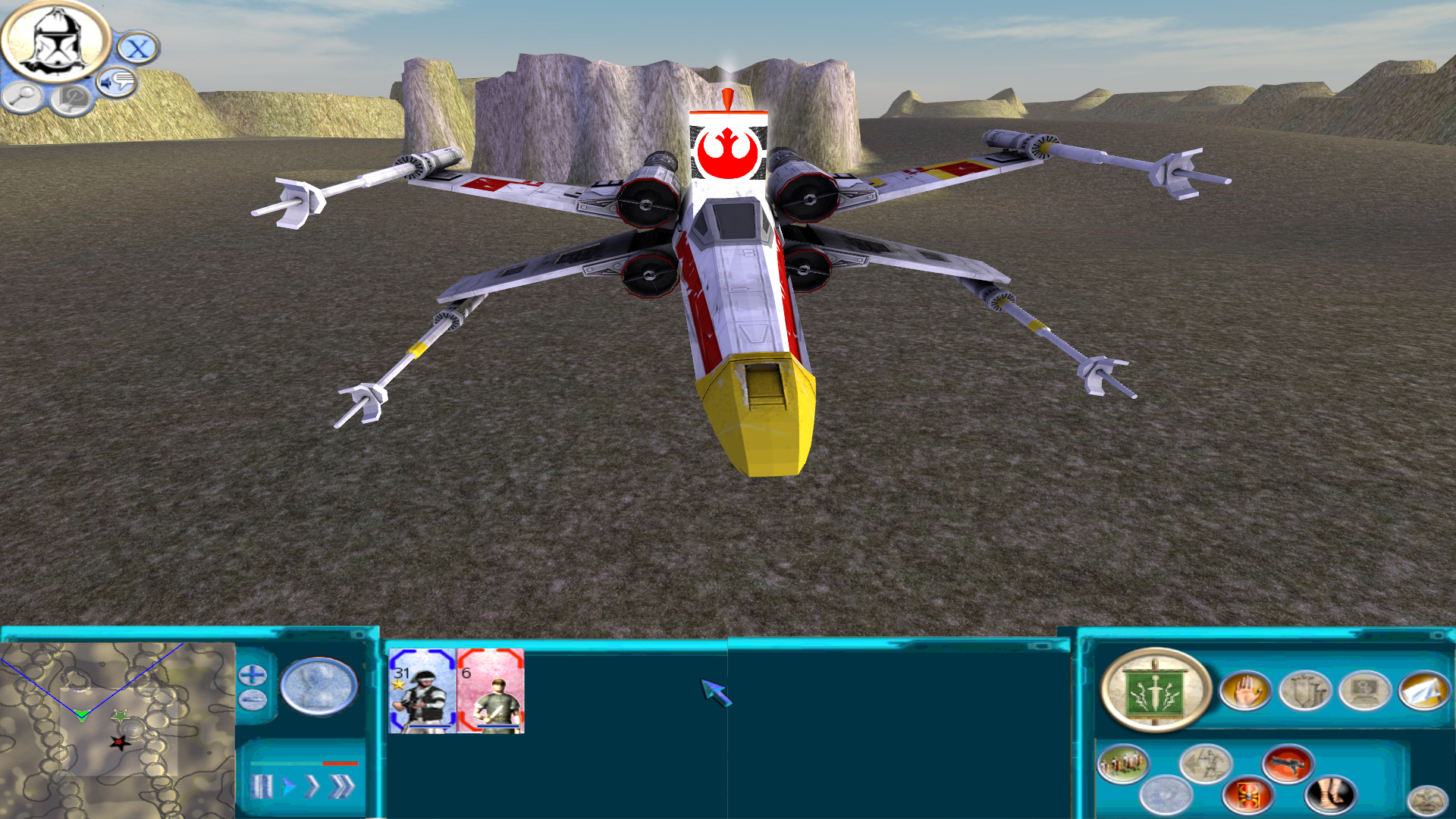 The last unit worked on by Dagovax Sirrianus, the X-Wings of the Rebel Alliance- they still do not have a unit card just like the Imperial Star Destroyers, and this unit were also lacking a name.

However it is fully functional in battle!"

3. The new Star Wars Galaxy map is included as well - it's a huge map with just two settlements. 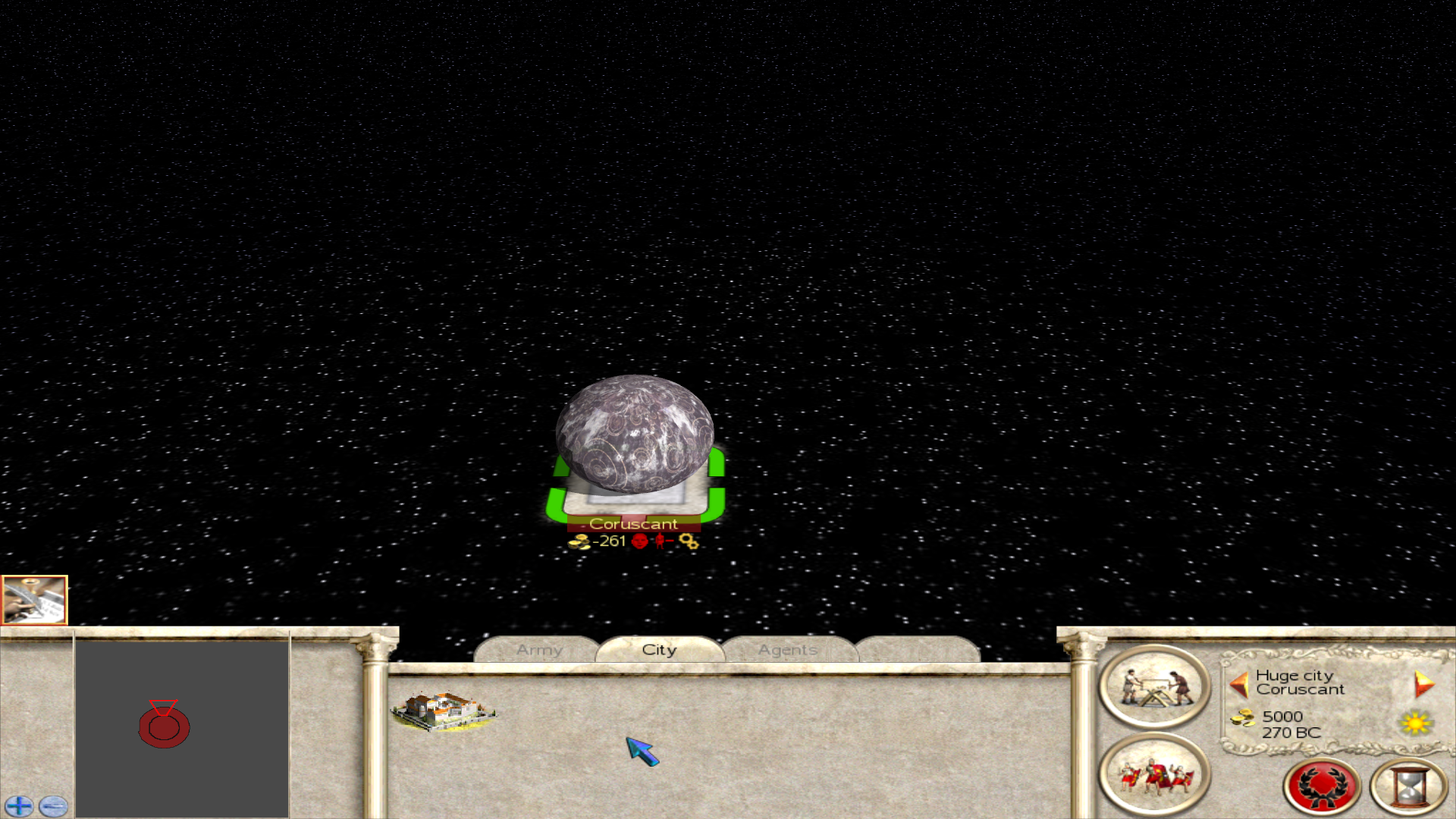 So the mod was last updated on february 21st 2020. One new thing is the planet strat-model for Coruscant. The strategic map is huge but it only has two settlements. Needless to say the map will need work in order to make it like the Star Wars Galaxy map.

The map isn't playable at all but you could take a look at it - and if you're a modder who wants to finish the map you have all the permissions in the world to do so.

Dagovax is working on TW:1942 and as such won't return to this mod in a while.

But try out the Galactic Empire against the Rebel Alliance in custom battle - don't forget to add Egypt with it's new unique Wookie-unit. The old units are still in the mod as I've said - don't use them as they're supposed to be replaced when this is finished.

Check out the map and we would be grateful to anyone who would work on it and base it on the Star Wars Galaxy map - it has the terrain, the galaxy and the strat-map model for Coruscant - it could be used for all the settlements. Two planets/settlements so it could be increased by a lot of planets.

But even with the map finished Dagovax would need to finish more units for the Rebel Alliance before we could have two gorgeous factions on the map.

You could use the old models as placeholders if you really want to.

Interesting i thought this mod had died a while back

Nope, it got resurrected in february this year after having been dead for like 11 years.

But Dagovax is busy on another mod so he wishes to finish that mod first.

He can't multiply and work on both simultaneously - and he is needed at least until the mod has all the rosters/map/animations and projectiles.

I would be able to finish a mod that has all that. But I cannot do the starting stuff.

In Warcraft: Total War we had other members doing the map, the models etc. I'm a coder so I cannot create that stuff. I need others to do that. For example in Hyrule: Total War all the assets were created already - it's still taken over a year to polish the mod up, fix all the bugs, add new gameplay, add custom settlements everywhere and you know utilizing all the resources of the mod.

Creating the resources isn't my thing - unless it's 2D-art.

With Star Wars it's more difficult due to the futuristic theme. Dagovax made a WW2 mod - He is the only one that can do this.

Mr_Nygren Thanks for info :) I clicked 'follow' to this & gonna share good word around wicked wide web once next update arrives. Good safe November o/

I hope at least that a version with the Galactic Empire/Rebel Alliance on a Star Wars Galaxy huge map will be completed.

At least Dagovax is still excited for this mod. He is just busy on another project as well.

Thanks btw, be safe from the virus you too.

Thanks man, your work on Sudamerica: Total War is impressive as well.