Posted by GriffinEndurance on Aug 1st, 2010

After careful thought from all of us here at Star Trek : Freelance, we have decided to create an engine specifically for the game. As a result it will no llonger be a modification for the original Elite Force game created by Raven Software. Below are some images of the Archer Class Bridge that have been successfully ported over to our new graphics engine IrrLicht.

IrrLicht is an open source graphics engine which supports DX9, "insted of EF's original DX7" and some advanced features such as dynamic lighting, bump mapping and higher model complexity. It might take some time before we are able to fully integrate what we have in EF into the new engine, and we will need to code all of the existing features and gameplay from the original game into IrrLicht.

We will be attempting to bring in some more people to help with this transference. This creates an exciting opportunity for Freelance and the future players. We will if course keep everyone informed of our progress, but expect a drop in visual media over the next few months while we focus on the code. 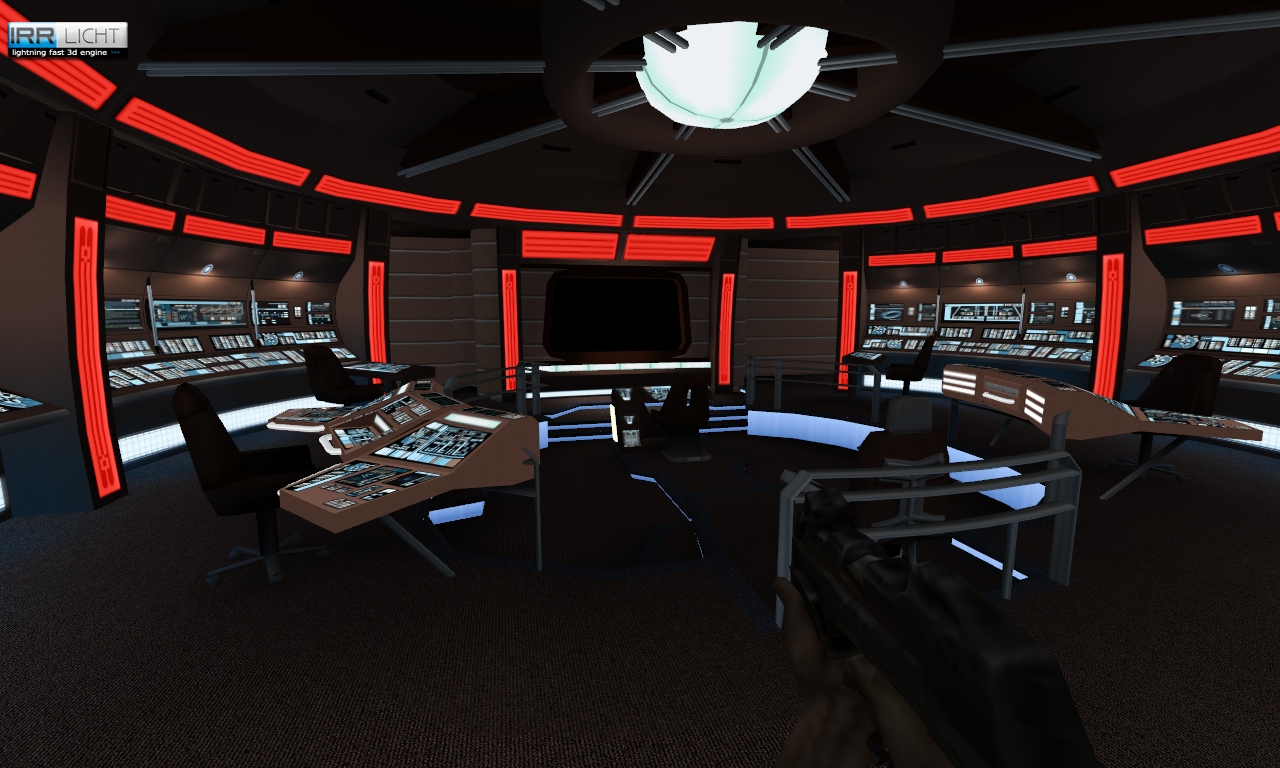 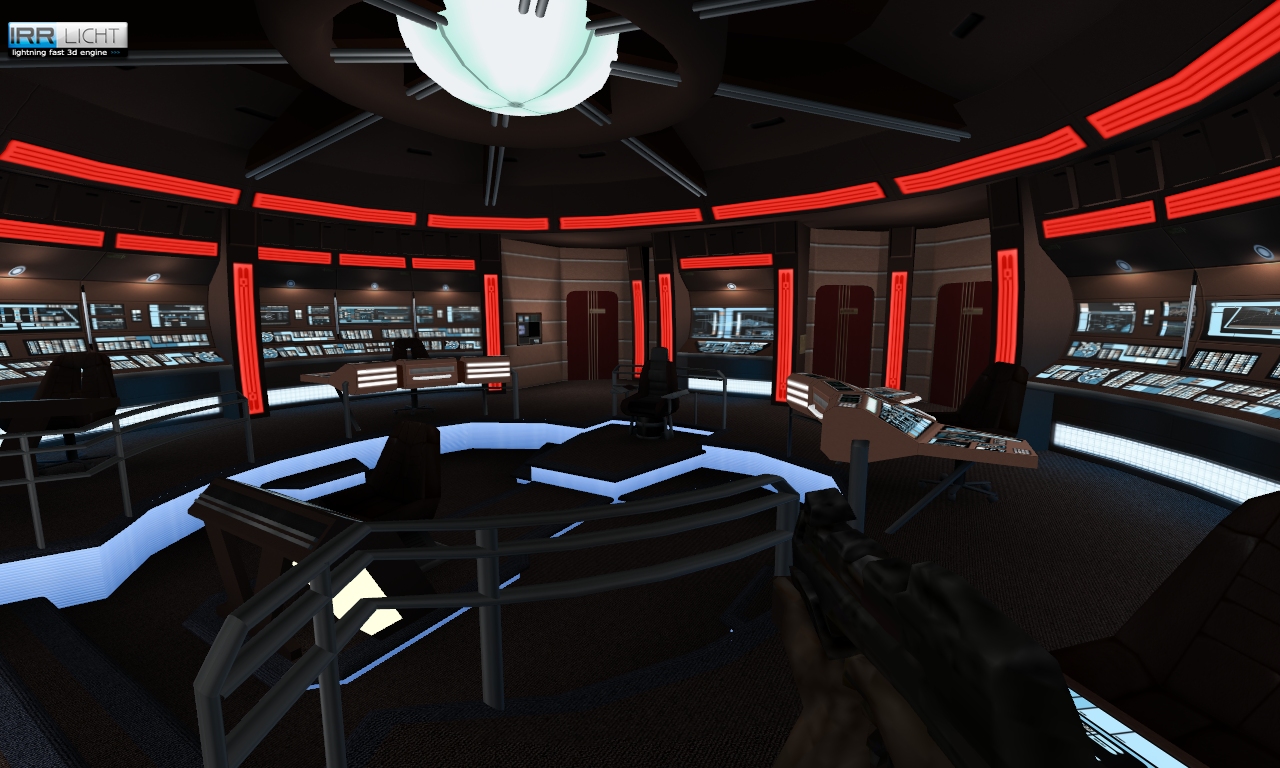 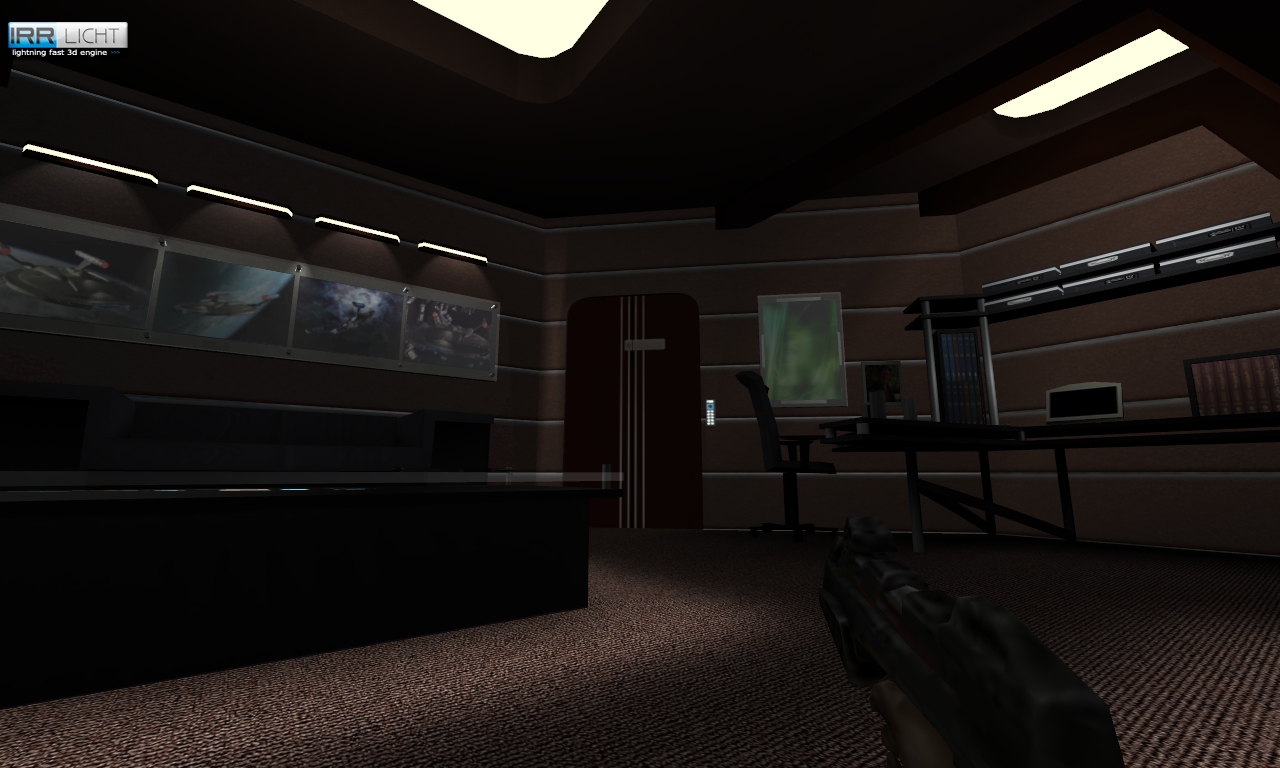 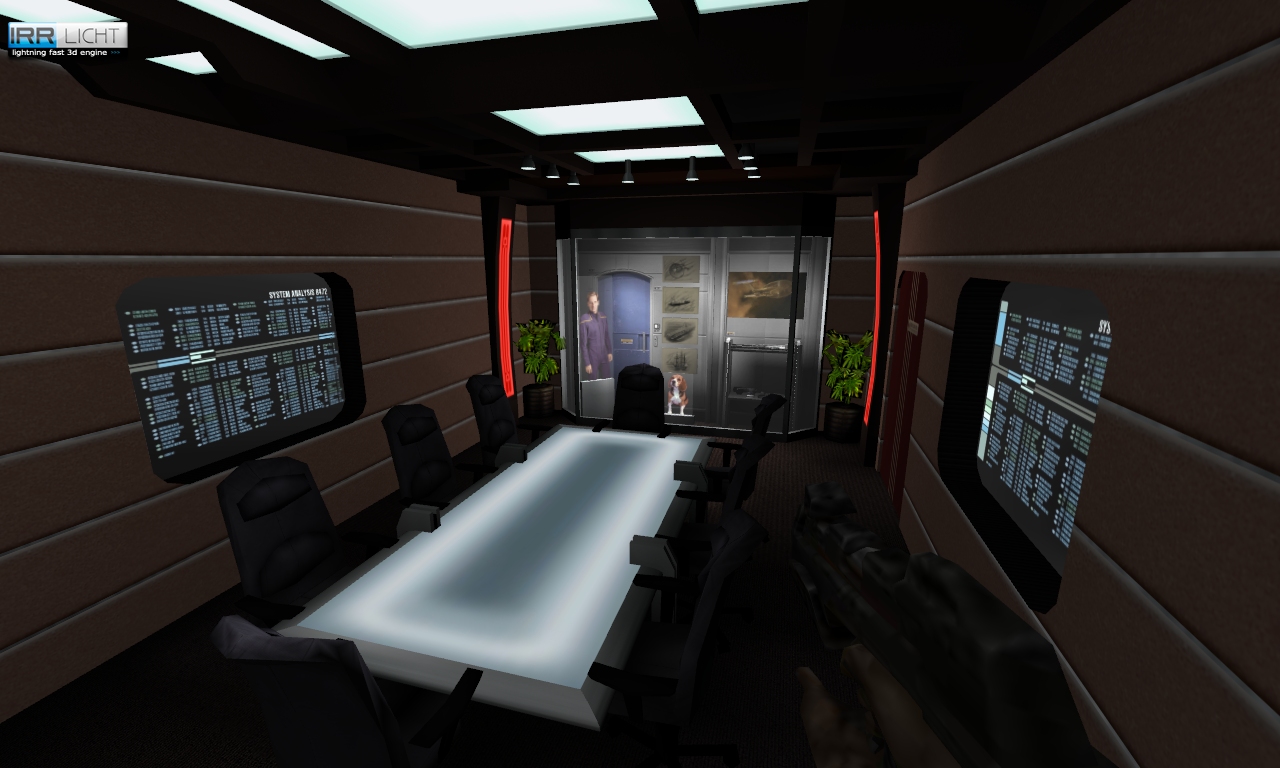 Please note: The weapon on screen is from a test project that comes with IrrLicht, and will not be featured in the final game. Also these image only express the graphics engines support of Freelance materals and not the advanced features that are yet to be implemented.

After several days of tinkering we finally have a working version of the multiple choice dialogue screen. This screen will be used during conversations with in game characters to select what you want to say. How it will be worded is as of yet undecided. We are currently thinking of having a summarised line to express roughly what your character will be saying for each choice and have already implemented a 'Intimidate' and 'Persuade' feature that will appear in green and red, similar to Mass Effects 'Paragon' and 'Renegade' Choices. Below is a test image of the implemented screen. We are also in the process of replacing the font as the original EF font looks a little out of place. 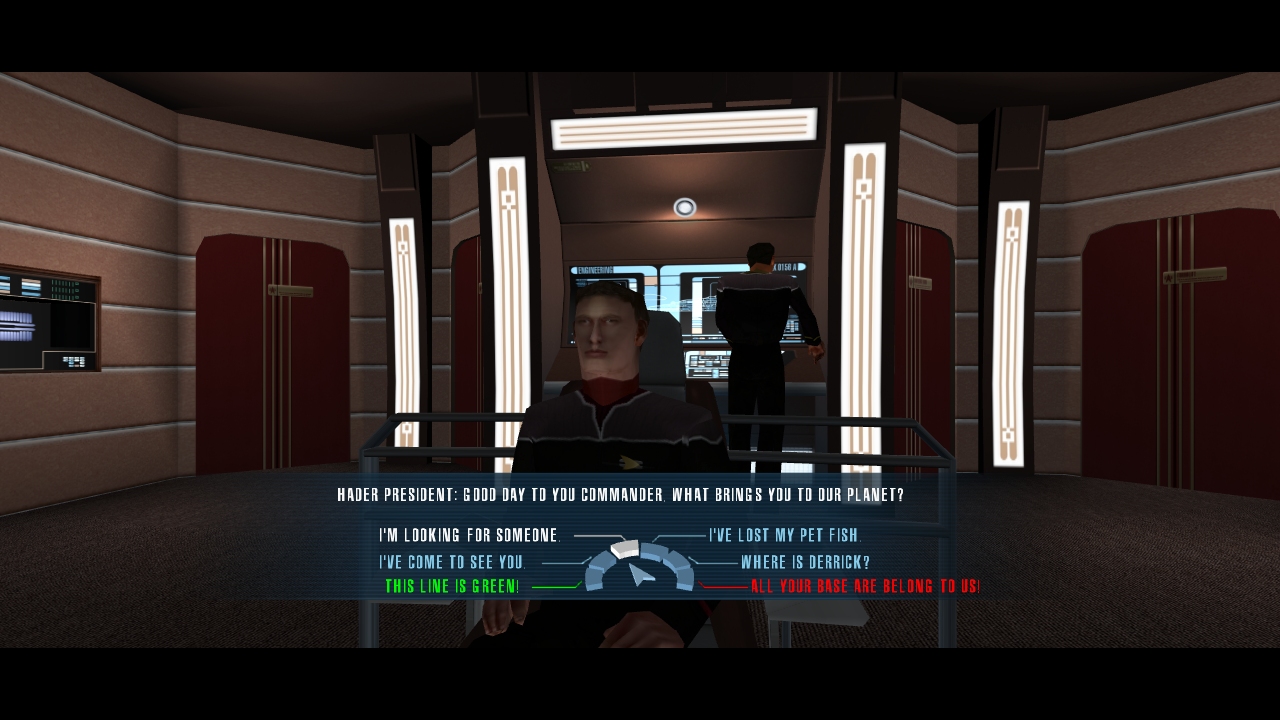 U know that u will have corpight issues with that?

The project will still be a free release, and all the work will be original so as far as I know there will be no breach in copyright. And of course, original Elite Force mods, maps ect will not work with Freelance, so it wont be like giving out a free copy of the game.

The only copyright issues they'll be faced with are from who ever still owns the rights to the Star Trek IP, which I guess is still Paramount. However I've not seen them enforce this at all.

I'm interested to see that you put a Mass Effect style Dialogue wheel in, interesting for a star trek game. Hope it works out for you.

Looks a lot better than the old EF engine, keep up the good work.

Good luck, I have been waiting for a new Trekkie game for a while - especially an FPS. Elite Force was always my favorite.

But you should ask for the authorization of Paramout.

As far as I know Paramount sold the rights to Star Trek when the new movie was made to CBS Studios. And as far as I know, as long as its a free publication, you are not required to ask for permission. For example there are many fan film serries, and other stand alone fan made games out there that didnt need to ask permission. As long as I put "Star Trek is a registered trademark of CBS Studios" in the read me, credits and menu system it should be fine. Of course I will consult with them before release.

Hey guys, I'm still fairly new to getting all these mods for EF, and I'm just curious what you mean by Freelance being standalone. When all is said and done, it'll just be an exe file to install and play the game with nothing else required? I apologize for my ignorance :P

Also I have to say this game looks incredible, the graphics are amazing! When I stumbled on it I couldn't believe what I was seeing. It has to be the best looking mod ever. Now I'm eagerly anticipating when it's finished. You said it will take some time to transfer everything over, and I assume work on it more, but is there a general guess as to how long until completion?

To be honest we have no idea, we have just lost alot of our team members due to inactivity, and it is such a large scale project, but it will be finnished. I havent spent the past 5 years plotting and planning this mod just for it to go down the toilet :P. Now, by stand alone it means that in the simplest of terms it wont be a mod anymore, It will be a complete stand alone game that doesnt require any other game or application in order to be downloaded and installed. Oh and thanks for the nice comments :P.

Hi there, have you ever released Star Trek: Freelance? I would like to game it some times ;-)
Greetings to all fans