My goals also focus on good weapon handling and balance. Animations play a vital role on this... Main menu finally put together and fully functional. Concept art, check it out!

Last month I released a video showcasing the work in progress animations this mod would include.
It makes me really happy a lot of people liked them and all the support I've received since then.
However, as they were my very first animations, they soon started to feel unnatural after some reviewing.
The fire anim of the sidearm didn't have any kick feeling, both reloads (empty and normal) were very artificial. The running animation looked unnatural as well.
My goals for this mod also focus on good weapon handling, balance and feeling, and for me how a weapon is animated makes a big deal of the difference. Despite imitating the way the shooter's hand reacts to the recoil is very complicated, I tried doing the best I could. And hopefully this time I got it right.
So below there's a more recent video showcasing brand new animations.

This video could be called Vol 2.

Anyone who has been watching this mod for some time may know I'm just getting started with 3D anims, so at this stage any feedback is important to keep improving.

-Since this is a general showcase, and not a continuation of the first video, I've included all animations, even those which were not redone.
-This link leads to the previous video, in case people want to review what has been changed.
-The sound quality of the previous one was terrible. Many people noticed and told me about it.
So I apologize for that. Luckily this one sounds better.

The animation names are displayed at the top left. They're just as guides.
Deactivate Youtube annotations if you do not wish to see them.

There's accurate information about which animations are proper of this video and which ones aren't.
In order to take the least space possible here, such material can be found in the description of the video.

The mainmenu was finally finished and put together.
It is fully interactive and functional, and it also keeps the 3D-ish design as its predecessor.
The oldest and first publicly released video of it can be found here , it will take you to the Youtube site. (Date Nov 10th, 2012)

And the next link will of course take you to the most recent one, also to the Youtube site.

Both can also be found under the Videos section in this profile.

Last month I asked an artist to draw a concept art picture of how the ship would look like.
After giving him certain pointers to take into account, he has drawn this beautiful representation of the ship in a sheet of paper.
I myself am very happy with the outcome.
The ship is composed of different decks, to which access can only be gained through the main tram system, running along great part of the vessel.
These decks are sorted by access restriction, some being public while others forbidden to any personnel aboard, like the Gravity-gen sector.
Amongst the ones aboard, some of these decks are the Rear quarters, the engineering deck, the medical deck, the arboretum, or the communications central...

The first image contains no shadowing, and it's the bare shape of the ship so that the hull plating is exposed and visible. 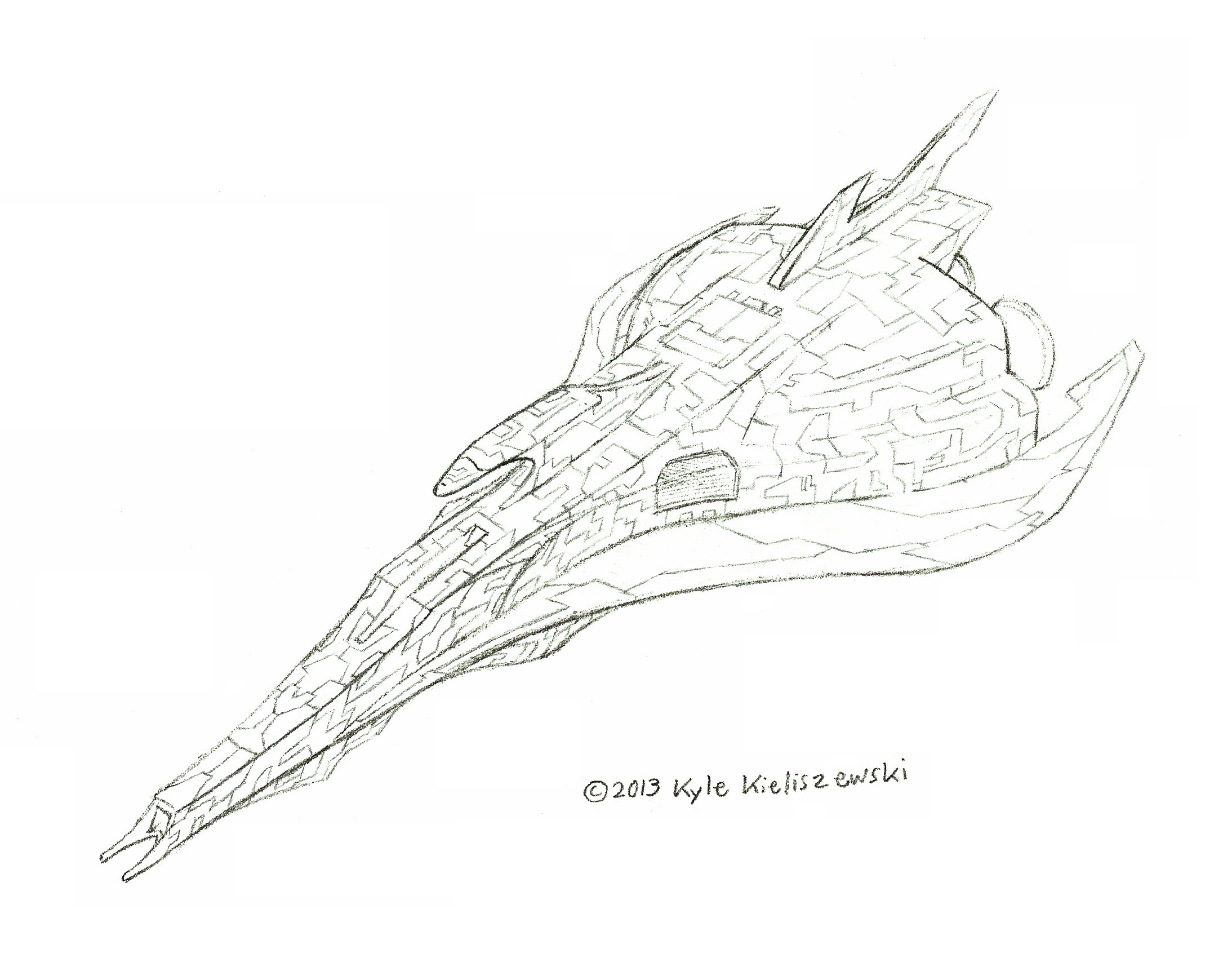 The second one adds shadows and a nice tone variation in terms of reflectiveness on each of the plates. 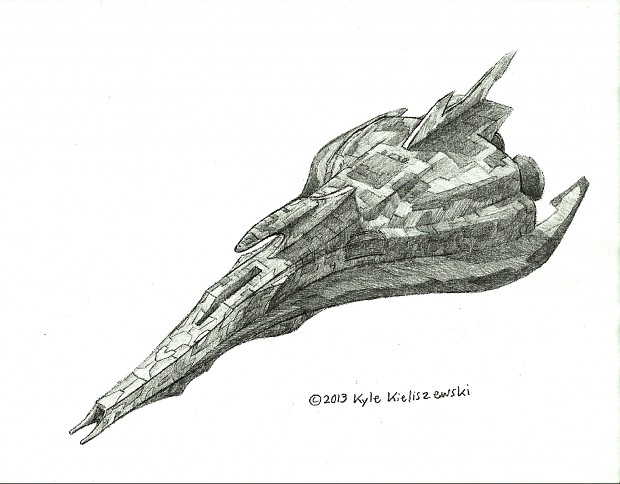 Basically the term "scavenge" comes from cleaning something up.
This feature has been mentioned before, and has been added to the mod "features" list as soon as I managed to get it working right.
However there has never been accurate information about the way it works.
It's pretty much like what players would find in current-era survival games

It has been thoroughly tweaked since the very first day it was tested in-game.
A "randomization" feature has been added, so every time a corpse is searched, a different item will be given.
All items have "rarity tags", so there are some which are more common than others. This is as wide as going from [very common] to [extremely rare] items.
Quantity varies by using a separate routine which specifies the amount of items given.

The action can be [canceled] by releasing the assigned key or by [looking/moving away] from the body. A corpse will be cleaned up only once the progress bar is completely filled. 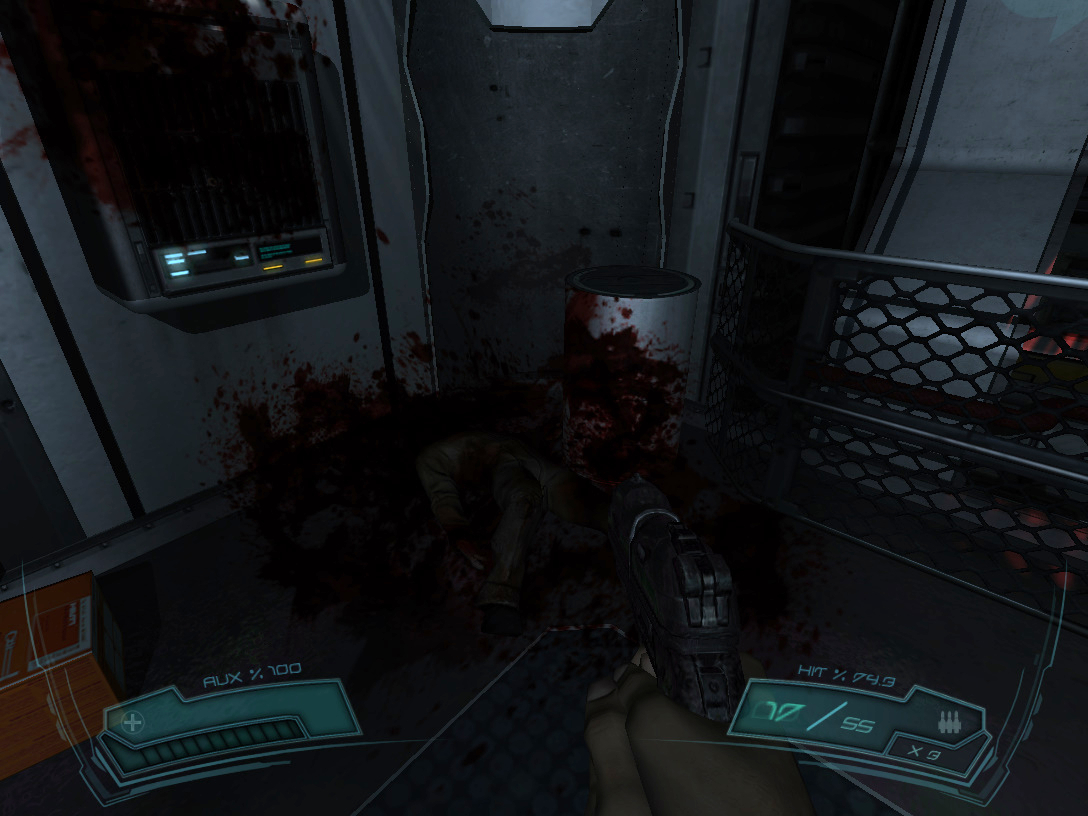 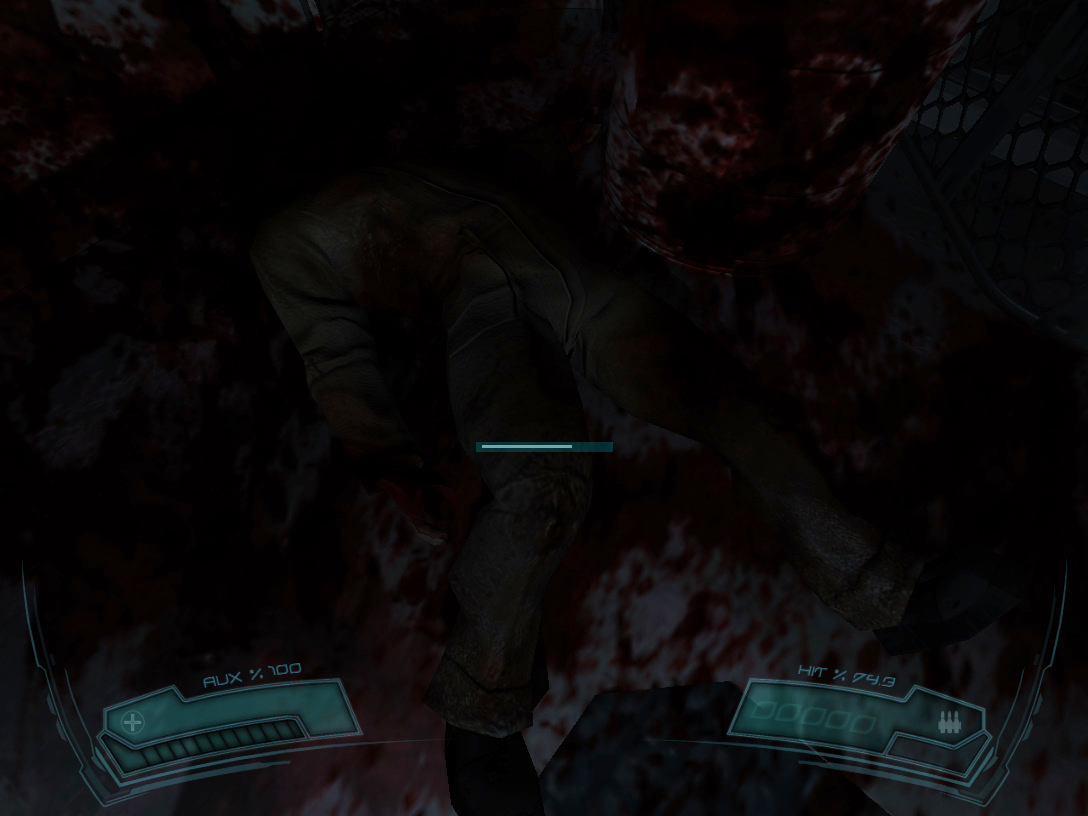 (Dead body and blood splatters are placeholders and should not be taken as actual game footage. They will also change and/or be replaced as long as the mod keeps progressing)

I would like to add that most of the time spent on the project goes for the technical side, which takes care of things working as they should.
This is good because I'm always trying to squeeze the best possible quality out of it as long as I can.
But on the other hand these tiny, yet very important things, cannot be explicitly shown in here or explained with words.
For this reason, I apologize for the temporary absence of level screenshots.

Don't forget to leave a comment saying what you think about this mod. Whatever it is (opinions, critiques), it's always very appreciated.
I'll be happy to answer to any questions that may pop-up if they're not already in the List of Q/A

Thank you for passing by!

I'm not sure about ship shape, it look more like a jet fighter, while in space there is no need for having aerodynamic design.
Try to look at ship in first Alien - spaceship look like flying factory, in Aliens Sulaco look like brick, bit similar is Pilar of Autun in first Halo (Halo4 got awesome spaceship). I like a lot shape of Ishimura from Dead Space and ghost ship from new Alien Breed.

Also spaceships got few more problems to resolve while creating design, You can not put crew rooms on end part near engines, small leak could kill whole crew if that happen. Bridge as I see on this picture is on top of ship, it can have nice view into space, but one asteroid could hit it and draw rest of ship useless.

Hi, thanks for the comment.
Since the reply for this contains some third-parties information, and it's a quite long explanation, I have sent you a private message where you can take some aspects of the ship into consideration :)

Nice update!Time for a little feedback. First, I am not sure about the new weapon sounds...they don't sound very powerful or meaty. Some diehard oldschool players might scoff at aiming down the sights or weapon lowering when sprinting.

I like the idea of scavenging! You could take inspiration from games such as Bioshock or System Shock 2. It would be cool if you also added money to buy stuff from vending machines (which you can hack)

Hmm... I personally think the weapon sounds are loud and powerful enough. In fact, they are recordings of live firearms. The handgun sound comes from a .45 Colt 1911, the shotgun comes from a 12 gauge mossberg shotgun, and finally the smg uses the sound a 5.56 Austrian Steyr Aug
They were processed and refined to adapt them into the game world.
If you do not want to aim, you're not obliged to do so, you can indeed unbind the button from the mainmenu and you're done. :)
However I encourage players to aim because that way they can gain an accuracy bonus and they could save more ammunition instead of spraying over the place.
For running, I'm afraid there's no way round to it.
I do like oldschool games, they're great fun, but sometimes I think sticking to them may be unfitting for the type of project I'm looking for. That is actually because of the game balance I'm after.

Hey man, very sweet animations! You seem to be well on your way. When do you think you'll have a release?

From the list of Q/A ->
"How far is it from release?
This can take a lot of time. I cannot estimate a date because it's very early in development yet, I'm sorry about that."

Considering I'm also having certain difficulties in my real life (You know concerns we all have) I'm progressing slowly with it.
That's the reason updates may start appearing slower than it was usual.
But as for a release. No, really don't know as of yet...

I'm in a similar situation myself at the moment. Thought I'd have an update at the beginning of April but haven't had any time since mid February. You really have to motivate yourself sometimes too, only last week I sat down and read through the entire design document from scratch, just to get back in the modding zone. Anyway, keep at it! The rewards of your hard work are coming! :)

It's actually quite hard sometimes to find spare time. You know that very well for sure. But well, as you said we have to keep at it and be patient, things will start progressing slowly.
I am motivated for this project but unfortunately my current situation is complicated.
Thanks for the comments mate, good luck with Total Recall ;)

The weapon sounds are making my ears bleed.

The DoomGuys Fans & Clans with 156 members