Check out the 5.0.4 patch! Featuring AI improvements, visual overhauls and an all new scenario, kicking off the Silmarillion Campaign!

Behold 5.0.4, the latest patch for LOME has finally arrived! What treasures will be discovered in this new update? First things first: Bug fixes! LOME has seen some spring cleaning this patch, and many bugs addling the game's performance has finally been sorted out and labeled a thing of the past. This includes all of LOME's missing sounds, and many broken textures throughout the game. AI has also seen some various improvements, thought I will discuss that later on.

Finally, the first of many scenarios covering events from the Silmarillion has arrived with the patch! Featuring a slightly short scenario about the Dwarven sack of Menegroth, this scenario features completely voice acted characters, and an animated cutscene and score to go along with it. This is the first time anyone will get a real taste of the cutscene concepts that will be greatly expanded upon in the New Shadow campaign set to release later this year. Let me know what you think of this scenario, as it will help influence me to release them more frequently or not! 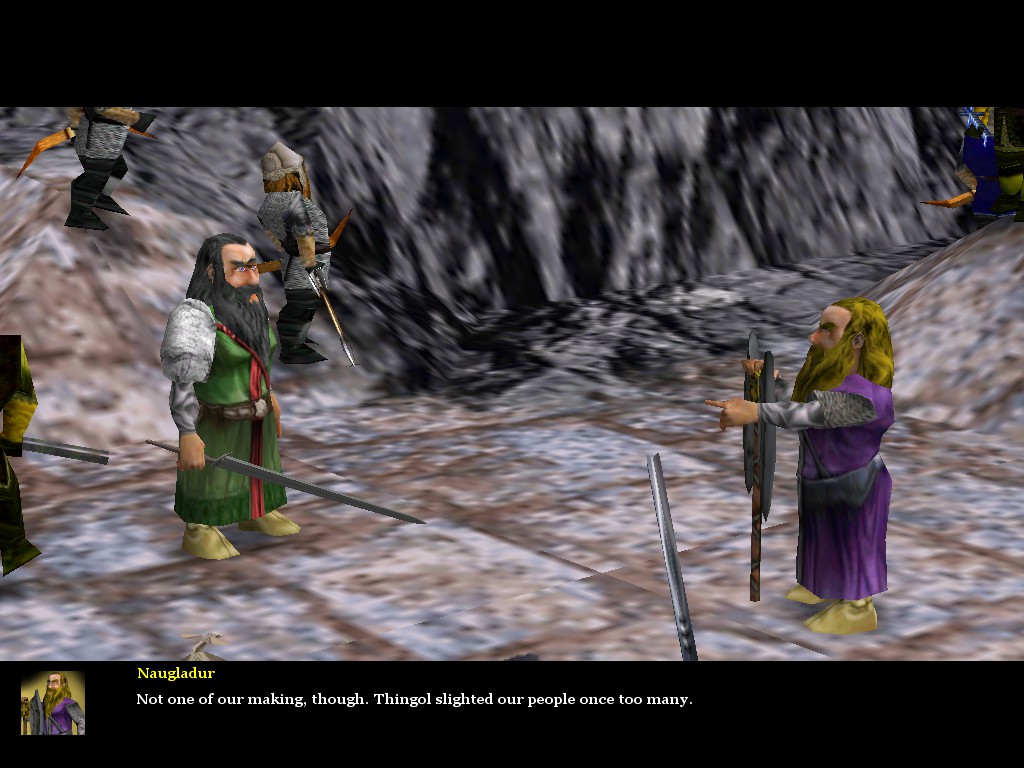 Assume the role of Naugladur as he reclaims his rightful Dwarven treasure from the Elves. Command his allied company, and his Orcish Mercenaries through a dangerous Elvish ambush! Will your decisions and leadership bring them home safely? Or will you lead your troops right into the clutches of Death? don't be discouraged by failing this level! Try, and try again! There are subtle differences between difficulties, so you can find your LOME skill level!

With scenarios on the tongue, I should also like to discuss the Easter map quickly! I planned to release this patch on first of April, but there was too much still to do! Even now, I'm positive that I have still forgotten something in this patch that's incredibly important. If you find it, let me know!

That being said, The Easter map had to be delayed with the patch. I'm hoping to launch it within the next few days, and the contest will still be made playable for the entire upcoming month! Remember to join the Discord and submit your high score screenshots in order to participate!

What do I win from the contest?!

I'm glad you asked! The winner of the Easter event map will receive a replica box of Legends of Middle-Earth! Not only is the box a nice decorative piece, it will also contain a few goodies inside, including a disk with the current patch on it, a digital art book of the original art in LOME right now, and one or two other surprises! I've mentioned the rules in the last article, but I'll recap: To join the contest, play the map and screenshot your high score. Join the Discord and post your screenshot to the Contests Channel. If you win, I will contact you about how I can ship you your prize! Bear in mind, however, due to the current global pandemic, I might not be able to ship the box until later this year.

This new update is packed with updates for RM and the game engine overall. I'm looking to make this patch the most definitive patch yet, so I don't have to create new massive patches for things like campaigns or AI updates, etc. As a result, a lot of civs have seen big changes and overhauls. 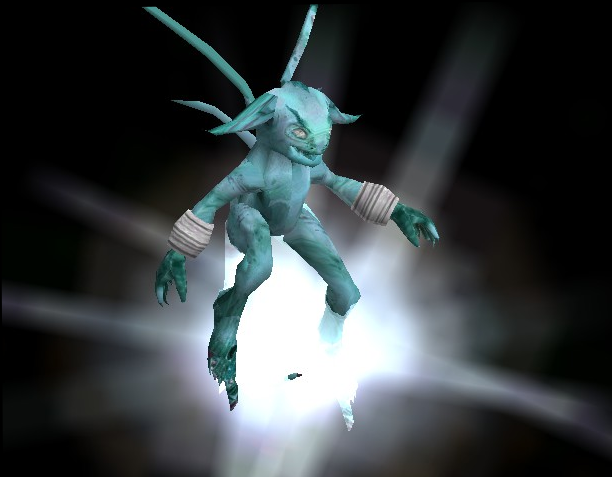 Long story short: I want myth units to be viable to players! As such, there are roughly eight new myth units with this patch, ranging from the Lorellin Elemental, to the Stone Golem, both powerful late game myth units.

Along with new myth units, old ones have seen huge buffs. The Armoured Troll and Balrog have seen big stat boosts, but can now hit units in a splash zone; meaning several units near them when they attack will get squashed. The Troll in particular now has three attack tags during its animation, meaning it can possibly land three blows to upwards of seven enemies at once. Normal soldiers have a difficult time standing up to the unmatched might of these dreaded beasts! New units, like the Lorellin Elemental grow and grow as they kill enemies, starting as a small spirit, growing into a massive entity, capable of one-shotting many unsuspecting units in a fight. 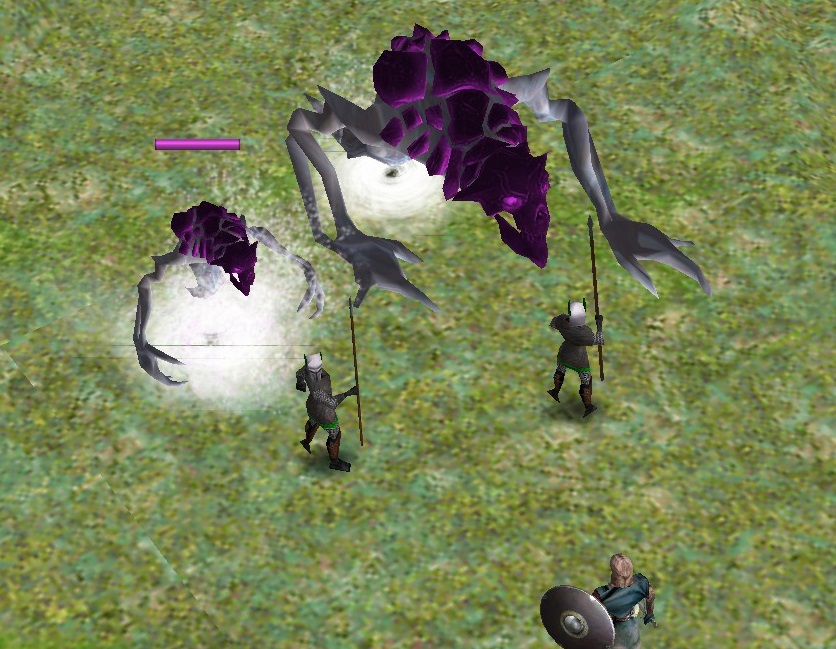 Thie Lorellin Elemental starts small and slight, but grows into a terrifying force of nature! 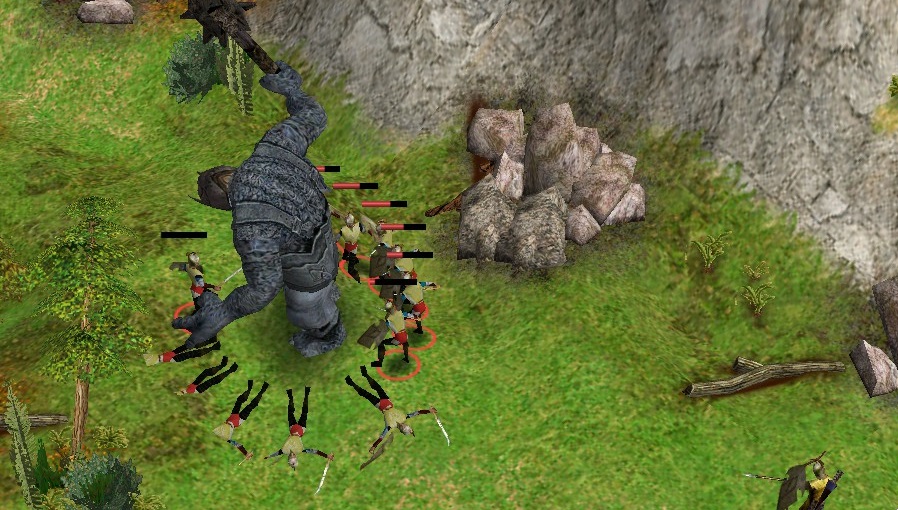 Experiment with these new upgrades and figure out how to shift the tides of balance in your favour with these powerful myth units! Good luck!

A lot of civs have been focused on this patch. Many were either underpowered, or simply not usable due to their stage of completion. The best examples for one of each is the Mordor faction, and the Lossoth faction. Lossoth have been incomplete for a very long time, but after much waiting in development limbo, they're finally fully playable. I still intend to give them attention over time, but this patch is a great breakthrough for them! 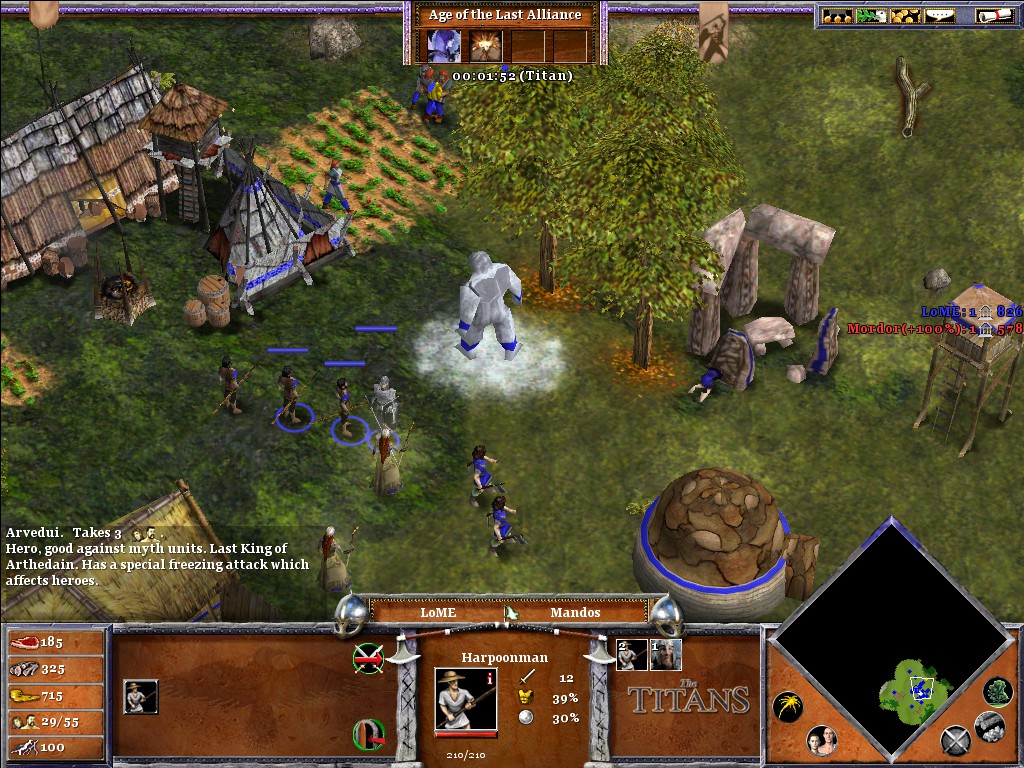 When loading into a match as the Lossoth, the player will be greeted with a slow start, but very quickly gaining speed towards winning. When choosing between Arvedui or Aiwendil in Age 2, the player will be granted either one of them as a hero unit. Arvedui is heavily focused on aggressive plays, and has a powerful freeze attack ability. Radagast on the other hand, will throw the player's economy ahead of the competition with the ability to empower buildings to work faster, and villagers to gather quicker. Strategize accordingly against your opponent. Lossoth Shaman are also a "new" unit, as they are finally usable in game. These heroes are very cheap to train, and move quickly with a reasonable attack, but are limited to five at a time. The Lossoth also have an abundance of newly modeled buildings as well to enjoy!

Orcs are a different story. As one of the most diverse civs in the game, it's difficult to pin down exactly what's wrong with them. In this patch, rushing your economy to hit that Golden Age 3 is the best way to succeed as Orcs in the long term. Depending on your major god, you will have the choice between Uruk-Hai, Haradrim, or Easterlings. These are all elite units, when compared to the weak orcish units. However, if you think that's all the Orcs have in their aresenal, you'd be wrong! Orcs benefit from very powerful, highly aggressive god powers, and powerful myth units, such as Barrow Wights in the early game which can make age 3 not even seen in a match.

Some other civs have seen buffs, such as Dunedain's human soldiers, and Gondorian Cavalry, but I'll let the game's patch notes speak for themselves!

Finally, the AI has seen some various improvements over development! Most AIs will use their God powers more effectively, and will age up will less issue. Some civs will begin building troops slightly earlier, as the meta of LOME allows for quicker early game battles. Ulmo (Elves) has seen some specific attention, as his AI would not work at all after the last patch. This problem has been rectified!

I'm also working on AI for Lossoth and Hobbits. The Lossoth right now can play well up until Age 3. They do not have the current code to build proper structures, and have a hard time understanding the way Lossoth build houses. Hobbits are still unable to make it over one final hurdle to be playable by the AI, and that is how the Hobbits gather gold. Unlike everyone else who will mine Gold, the Hobbits farm gold from a unique building called the "Plantation". Hobbits do not seem to understand this and will build one, and leave it vacant, a true shame. Besides this bug, the AI will still age up and train units if they have the gold. I am not so worried about this right now because AI files can be dropped as new downloads any time. They're very isolated files compared to most of LOME, so I will drop new updates as I make them! 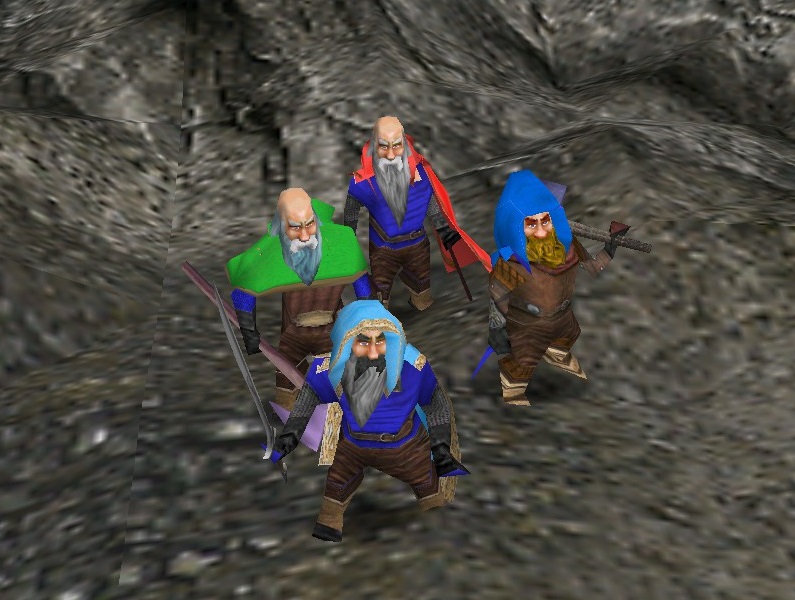 Dwalin, Balin, Fili, and Thorin's remodeled units! Do you know who is who?

There has been many, many visual updates in this patch. Several models from previous patches have seen touch-up (such as the Armoured Troll), and quite a few heroes, units, and buildings have been completely remodeled and reanimated. Easterlings, Haradrim, and Uruk-Hai to name a few, but there has also been a few Dwarf heroes, and the entire Fellowship has been remodeled. Some heroes even have "wounded" animations when their health reaches a low enough threshold. Several buildings have been revisited, such as the Mordor Shrine, among others. 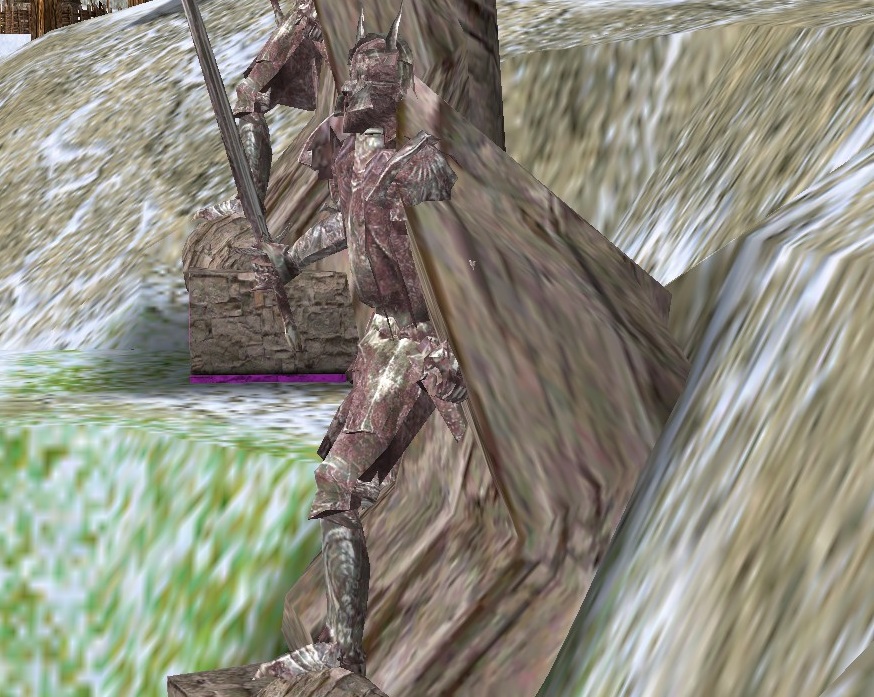 A Shrine to the Darkest Lord himself: Morgoth

There are also a handful of visual bug fixes throughout this patch as well, such a missing particles and missing shadows! Some buildings have had their selection boxes revised to be more clickable, or vice versa.

If I do not receive too many game breaking bug reports in the coming few weeks, I will be moving on with LOME's next biggest project: The New Shadow! I've been teasing the campaign for a very long time, and it's very close to completion. I will not be spending anymore time on LOME's Random Maps, or otherwise patches until the New Shadow is finished. I am aiming to have New Shadow finished no later than July, but it is highly possible I may have to push it back to the Fall of this year. The current pandemic has done a surprising amount to slow my efforts down, so bear with me!

After the New Shadow is done, I will still be supporting LOME with Silmarillion maps, and new random maps to play on. I will be looking into how to support LOME online more so people can more easily play with one another, but until then, you'll have to play solo, or LAN party. I have a current day-job, and I also have a job as 3d animator, so it's very possible that by the start of 2021, LOME will finally be finished for all time. But do not be afraid -- we still have time! Thanks to everyone who's been supporting the mod over all these years! The Event map is right around the bend, so keep that coffee hot! Have a wonderful Easter holiday one and all, and be sure to join the Discord for more frequent updates, screenshots, and discussions about the mod!

Thanks for the update, it's amazing what you've done witrh this venerable game. Nice to have campaign in the works, it's like the RTS of old :D

When trying to run AOMEmod.exe I get the Error: Unable to find splash resources.

EDIT: I figured it out. I was trying to run it from a renamed AoM folder and it doesn't like that. I was hoping to keep the game folders separate to run different mods so if that is a possibility, please let me know.

The mod already runs off a different exe. The mod is made with consolidation in mind.

Thanks for the hard work!