There was Eru, The One, who in Arda is called Ilúvatar...

Rejoin a mod as old as the First Age, but as spritely as a young Hobbit! Legends of Middle-Earth is back to being regularly updated, and aims to finish the work it layed out years ago! Take armies of Elves, Dwarves, Men, or orcs to battle for your dominance of Middle-Earth!

PLAY THE MOD ON THE STEAM WORKSHOP

BE AWARE: The Titans version of the mod is no longer supported, and only archived versions of it are up for download anymore. Mainline updates are relegated to the Steam version, linked above.

Only standalone downloads will make their way to Moddb anymore.

Want to see a bit more of my work? Check out my music pack for DOTA 2!

Today we roll up those strings of lights, an take down the wreath, but do not despair, for with the new year comes the chance to celebrate all these festivities again soon!

As you may know, since the end of December, LOME has been running a short survey asking some very important questions, such as how people play the mod, what they think needs to be improved on, and what type of content they'd like to see in the future. You guys have done a pretty great job giving me a fairly decent sample size to work with, so after this next week, I will be closing this survey down, and potentially starting up a new one!

UNTIL THEN, IF YOU HAVE NOT TAKEN THE SURVEY, PLEASE CONSIDER DOING SO RIGHT HERE!

I don't want to spoil the results of the survey quite yet, but I will say that I've had an overwhelmingly large response to single player content, so rest assured, the mod will be getting plenty of that soon. 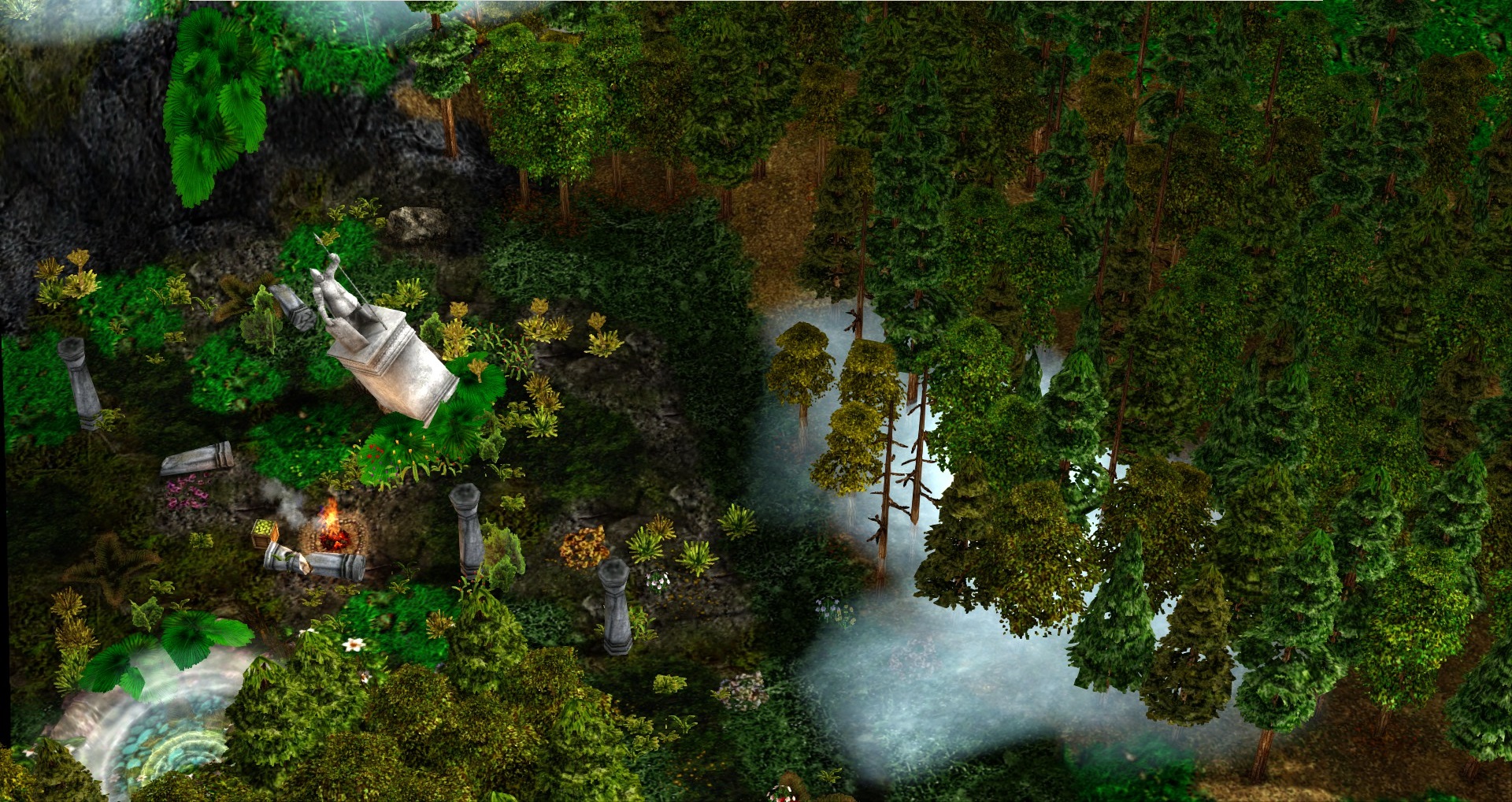 The deep, luscious, yet unnerving forests of Nurn... What dangers lurk within the mist..?

First, a quick update on campaigns:

As revealed by the last update, the Theater of War campaign is wrapping up nicely. This campaign is a simple 7-9 level campaign with each level having a more or less independent, isolated story of each other; what this means is that there's almost no actual continuity between these levels, other than that they play in chronological order, starting from The Distaster of Gladden Fields, at the start of the Third Age, and ending with some of the final battles of the War of The Ring. Despite that, this will not stop you from getting personally invested in each one of these stories, as most of them still have their own twists and turns waiting for you.

On top of that new campaign, I am also going to be publishing a lot of hotfixes to existing campaigns, including The Gray Company, The Silmarillion, and the LOTR Legacy Campaign. These campaigns will now be far more stable, and definitely easier to play.

Now this one I'm really excited about. Patch 1.2 will unveil not one, but TWO civilization reworks: Elves, and Hobbits (please tell me how relieved you are to finally hear about this). 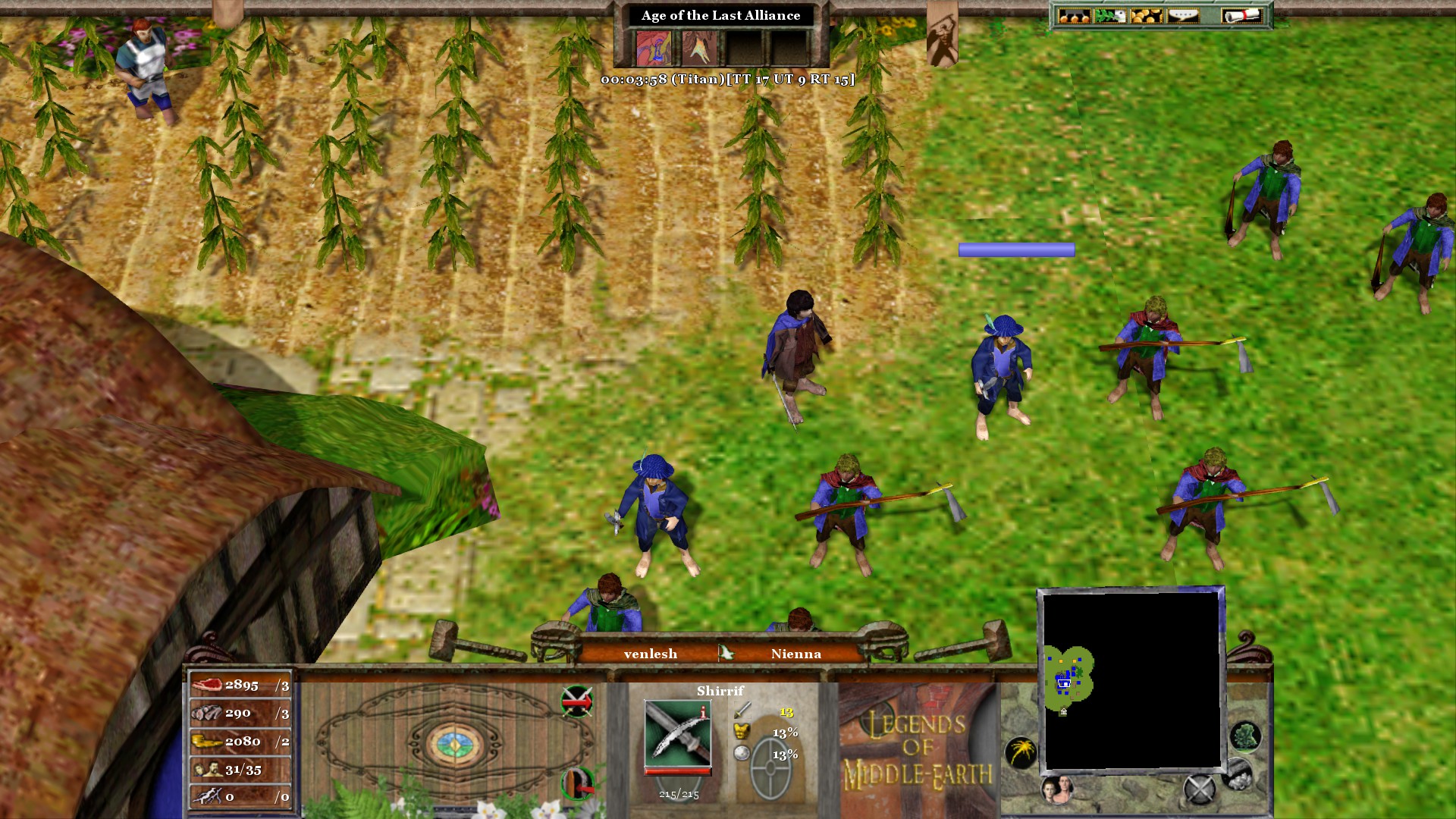 Hobbits have long stood as a janky outsider to the main roster of civs, and the Elves seem far to safe and boring to be considered engaging. This is all about to change, however. Starting with Hobbits, much of their "jank" has been removed, and as well as receiving a complete HD makeover, they're now far more straightforward to understand.

Plantations are now farm plot sized, and function identical to them, but they still gather gold, as opposed to food. Hobbits can also mine gold now, albeit very slowly. Hobbit military is now more diverse, and stand-alone. While Hobbits will still age up by "Befrieinding" other Middle-Earth nations, these "friends" will now feel more like support, as opposed to the main weight. Here's a look at the new, or reworked units: 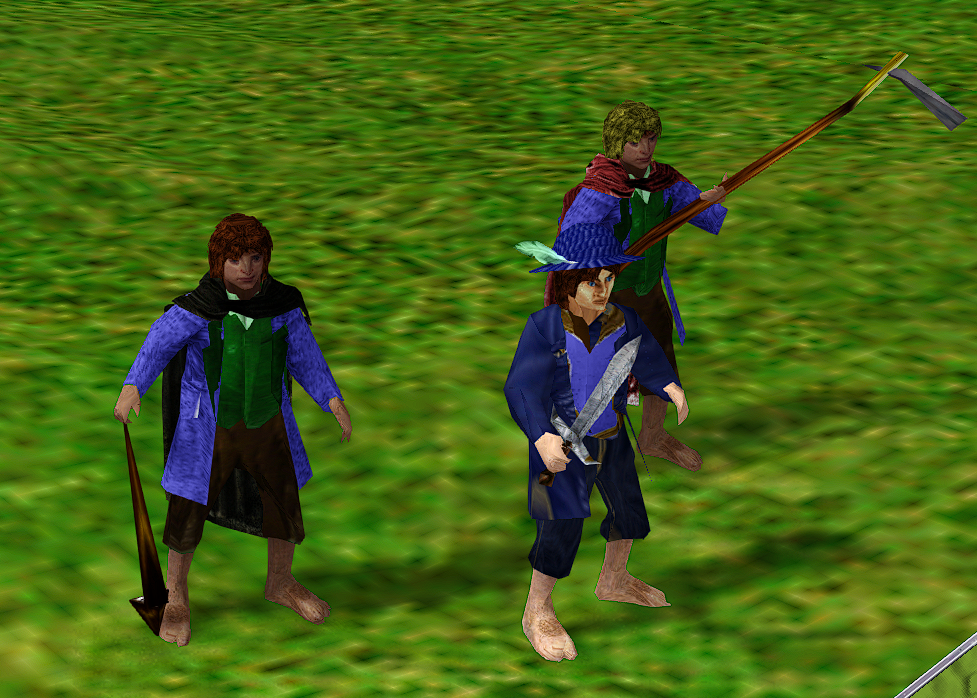 Hobbit Slinger: Replacing the Hobbit Archer, the Slinger is a simple ranged unit with a fairly high base damage. The rocks they throw are also very capable of denting and bashing armour (or skulls), giving them a small bonus to infantry.

The Bounder: Bounders are stout-hearted Hobbits (deputized by a Shirrif), who play the Hobbits' primary infantry unit. Though not very impressive stat-wise, Bounders are easy to amass, and use their tools for weapons. Instead of following an upgrade line, Bounders will get stronger when upgrading your economic technologies, which will give them stronger "weapons" in the process.

Shirrif: The Shirrif was originally the de facto military unit for Hobbits in the past, but they are now a special unit for Hobbits. Shirrifs grow stronger in a group, and benefit from all military upgrades, but have a train limit of 10.

Hobbit Stone Thrower: When being besieged, Hobbits are no cowards! Stone Throwers are an alternate form for your Hobbit gatherers. While in their attack form (The Stone Thrower), Hobbits will gain a ranged attack, and even though they won't deal an especially large amount of damage, each stone throw has a 3% chance to deal 300% critical strike. The Stone Thrower's best use is home defense in your darkest hour. 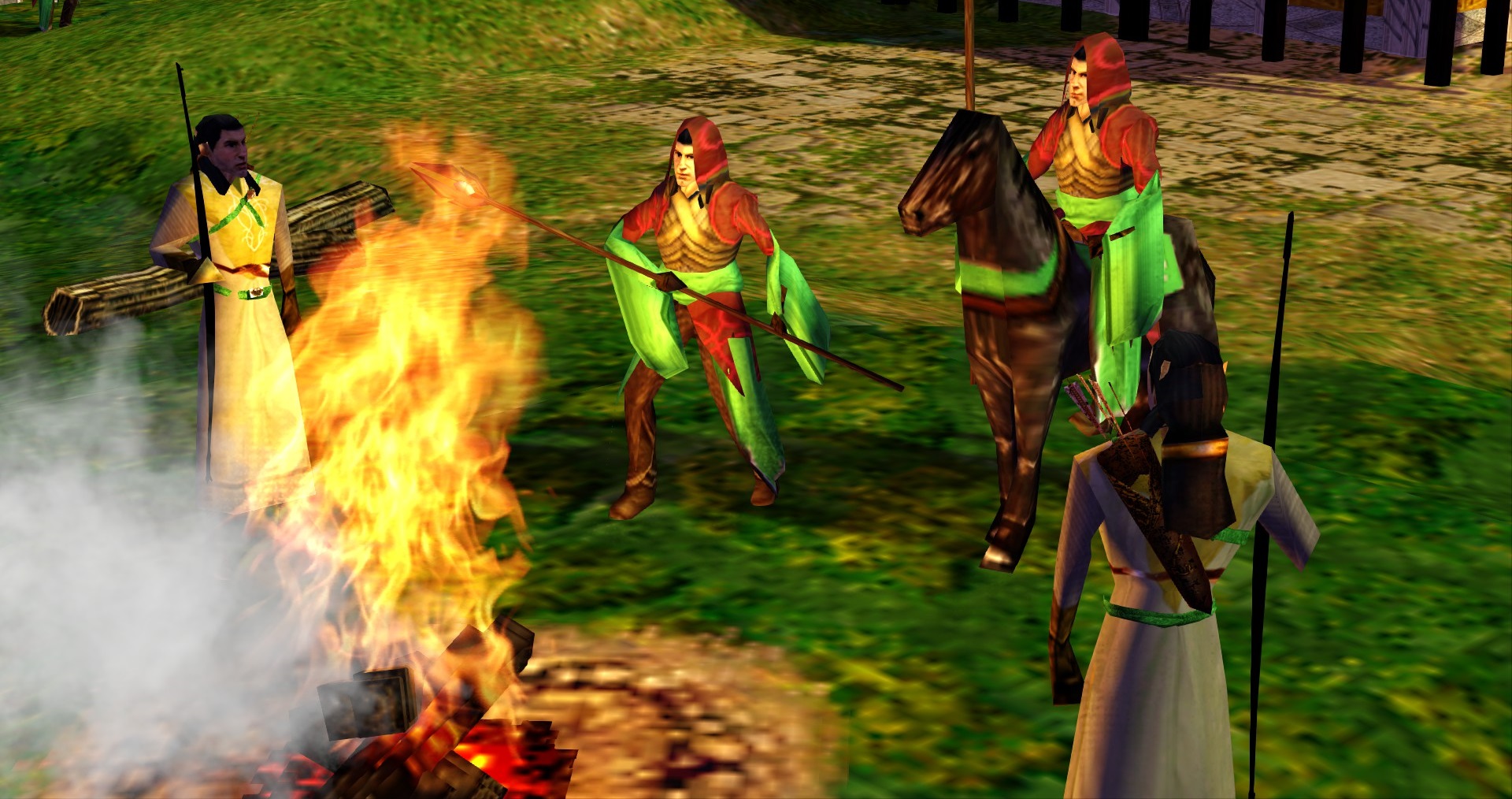 Elves have been given a massive shake up this patch, as well, including 3 new units: The Curunir, the Weathermancer, and the Cavalry Lancer, some units also have new abilities, such as Galadriel's special attack now spawning lingering blue flames where her bolts land. She also has a 15% chance to leave a blue flame from a normal attack. In a confined fight, Galadriel is more a threat than ever before. Let's also go over these new units below:

Curunir: A support caster, the Curunir is capable of healing units, and also has the Slayer" ability, meaning that, while the unit is not a hero, it will do bonus damage to myth units. The Curunir has a full upgrade path, and can be later upgraded to suit different needs.

The Weathermancer: The first of two new cavalry, the Weathermancer is capable of commanding storms, and shooting arcs of lightning at enemy ranks. They can also be upgraded later on like the Curunir.

Lancer: The Cavalry Lancer is the Elves' hard response to cavalry builds. Capable of outrunning most cavalry, with a long attack range, enemy cavalry will stand no chance against them once they've overcommitted to a battle.

I've done some editing to the game's UI, making icons and health bars much bigger (about ~30% bigger), this works well as a lot of LOME's icons were already twice the size of vanilla AoM (128x128, as opposed to 64x64). This means you can see all those unit icons in the glorious HD they were intended for!

And finally, the survey above also mentioned crowdfunding support for the mod. To be honest, I'm surprised to say that the feedback has been about 50-50 split for it (with most still posting "Maybe, if the rewards are good"). Crowdfunding has been something I've stayed away from for years because of its way of muddying the creatively pure sphere around the trade of "modding" itself, but I will admit that its getting harder to continue supporting LOME with my other engagements picking up steam. Let me know your thoughts by taking the survey!!! Until next time, folks! Take care, and keep on playing the mod!

With 2021 coming to a close, figure out how you can get involved in helping to shape LOME for the next year, including taking the LOME End of Year Survey...

The Community voted it in! Now get all the hot, gingerbread sweet details in this article!

hotfixes, and a possible Christmas event for LOME this holiday season? Furthermore, check out the latest updates on the original upcoming game "Odyssey...

The Southrons Civ Has Arrived!

With patch notes so big, Steam wouldn't let me tell you everything! There's never been a better time to jump back into LOME!

It is strongly recommended against playing this version of the game. This version is out of date by the workshop version, a link to which can be found...

Play through endless hordes of Easter stealing Orcs in this holiday event, while gaining score with a team of your own custom Middle-Earth heroes!

The biggest update to date, this version of LOME includes AI, campaigns, and other bug fixes and updates.

The next comprehensive update to LOME! Replace any files in the mod with these files! This version is a completely fresh install of the mod, and the most...

So this mod is now DRM'd to steam only? May as well remove it from it here then.

I'm sorry, do you run this mod? Let me just get right on the Steam articles page and create well organized articles which will be seen by an extensive audience, and easily shared amongst different crowds with easy linking. Steam definitely doesn't suffer from a lack of modernized community sharing outlets. Steam Groups are definitely not abandoned by Valve at all, no sir.

You are of course free to do whatever you want with the mod. However ModDB is a place for all pc gamers not just the steam monopoly. If its steam only now, then there is no point it being here. Not targetting this specifically, any mod which is steam or creation club, or r* only need not appear on a general site.

You clearly lack any knowledge of how this mod works. Any slight amount of investigation would yield that there are 8 files for download on this mod, which are still relevant downloads. Go **** and moan somewhere else, you British git.

Hey, I need a help. I already installed AOM and Titans Expansion and it works very well, but when I try to install the mod, it just doesn't install. Before the current problem, it also showed me some other problems about archives not found but I could solve, but when I got the problem "The procedure entry point RIB_load_provider_library cannot be found in the dynamic link library mss32.dll." I couldn't solve this, could you help me :(?

I have never heard of that specific problem, but check out this install video guide and see if your installation lines up with it:


Remember that the mod is also available on Steam if you use the Steam version of the game!

I tried researching your problem, and it seems to be a common problem found in torrented versions of AoM. I'm not against torrenting the game, but it's not an area I'm very well versed in, so I'm not sure I can help. I will continue to look into the issue, and see if there's anything else I can find.
Though, at the end of the day, I recommend the Steam version of AoM in 2021.

Well, seems I'll have to buy the game. No problem with it then. Thank you!

The Forgotten Ending Age of Mythology: The Titans