We are proud to announce that Game Patch 1 is officially out for ‘ORION: Dino Horde’. This patch addresses a few issues that we have pin pointed with the help of developers, official testers, and the welcomed addition of all you new gamers. We absolutely love the help you are providing and the feedback you are sending so keep it up!

This is the first of many patches. We will constantly update, tweak and modify the game based both on our feedback and feedback we collect from you guys. Here is Game Patch 1, which is officially out now and all the servers are updated and ready to be played on!

You’ve all been great thus far and we hope to continue this relationship with you guys and utilize your feedback on a permanent and consistent basis. If you ever find something you want to report simply send an email over to:
bugs@spiralgamestudios.com

Spiral Updates are planned to occur twice a month, every two weeks. We are proud to announce that the first one is being prepared to deployed next week.

These are content updates that add the following items

Map Variants are new takes on already existing levels in the game. The first two map variants that will be added to the game to add even more spice and variety. The first pack is the Night Pack 1 which will introduce two additional takes on existing levels:

These are going to be incredible filler updates that continue giving you guys more of what you want while we work on the much larger Title Updates (DLC Packs) which will start coming in June 2013.

We are proud to announce that Title Update 001 is slated for release in June 2013. Title Updates are going to be handled a little bit differently than Dino Beatdown and will be made into separate DLC packs just to keep the actual core games installer size as low as we can. These will be FREE.

This is the first mega DLC update that will be launching over the Summer. The first Title Update is called the Jungle DLC Pack and will be completely focused on Jungle-based content. We can confirm that the TREK Long Bow will be the featured weapon: 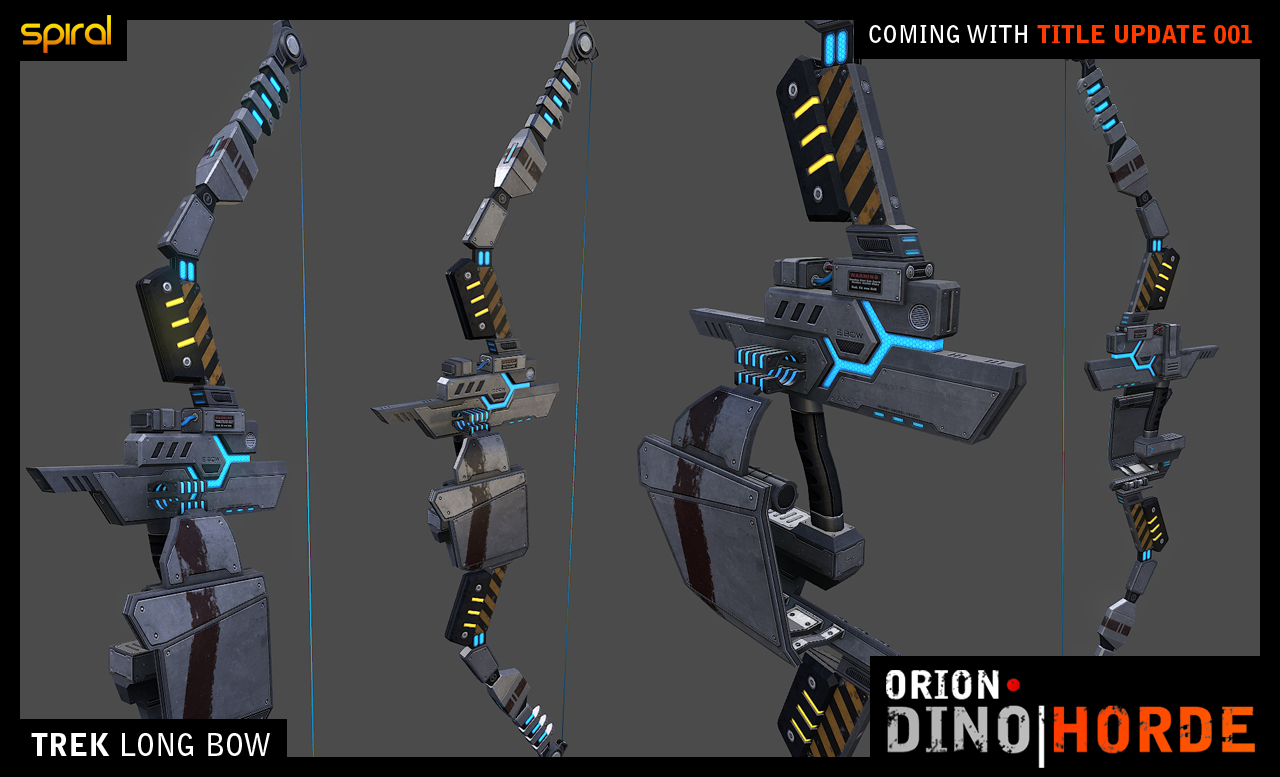 Every DLC Pack Update adds a wealth of new content for the low price of absolutely FREE. With every DLC Pack (Title Update) you can expect:

I would also quickly like to address some things we’ve heard lately and what ‘ORION: Dino Horde’ exactly is and why we built it in the first place and where our intentions and hopes were placed:People are trying to call it a lot of things: a sequel, an update, a patch, a re-release, but that’s not what we wanted or think the focus should be on.

The original hope and goal was to always focus more on the moral and mentality behind what Dino Horde stood for, which is a developer that owns up their mistakes (rough release), takes responsibility and spends the better part of a year working on a completely revamped and gutted game which is handed out to all of those affected for free.

This coupled with free DLC (no seasonal pass, please) is what the focus should be on as that is what we need MORE of in this industry and how we, small indies, are attempting to make that shift with way less resources than the larger sharks in this pool.

A SOLUTION TO YOUR PROBLEM(S)

That is all for now. We’ll be popping back with more updates over the next few days as we prepare Spiral Update 1 for deployment next week. Hope to see you in some game matches soon!

I heard this game got a bad start, but hopefully with a constant flow of patches and free dlc this will become a great game. :)

Wow, this looks really interesting. I will defiantly be following this.