Large update about various progress on the game. Article includes lots of screenshots, just a warning for people with slower internet.

Alright, update! I haven't posted on here for a while so there is quite a bit to talk about.

First thing to mention is maybe the war memorial basement which will be the second level of the game. Its far from done and I have only a few things to show you. Also the lighting in it is a bit too krass and will likely need some touching up in the future before its in a playable beta state. Combat has also been overhauled so its currently about...maybe...sorta 30% less awkward and pathetic than regular GG combat.
I've also taken some care replacing the hit and bullet miss sound effects to make the combat at least sound less jarring.
There is a lot that still has to happen on this front and I am curious to see what I can really do with it. No telling if it ends up any good or fun but I will certainly try to make it that way. 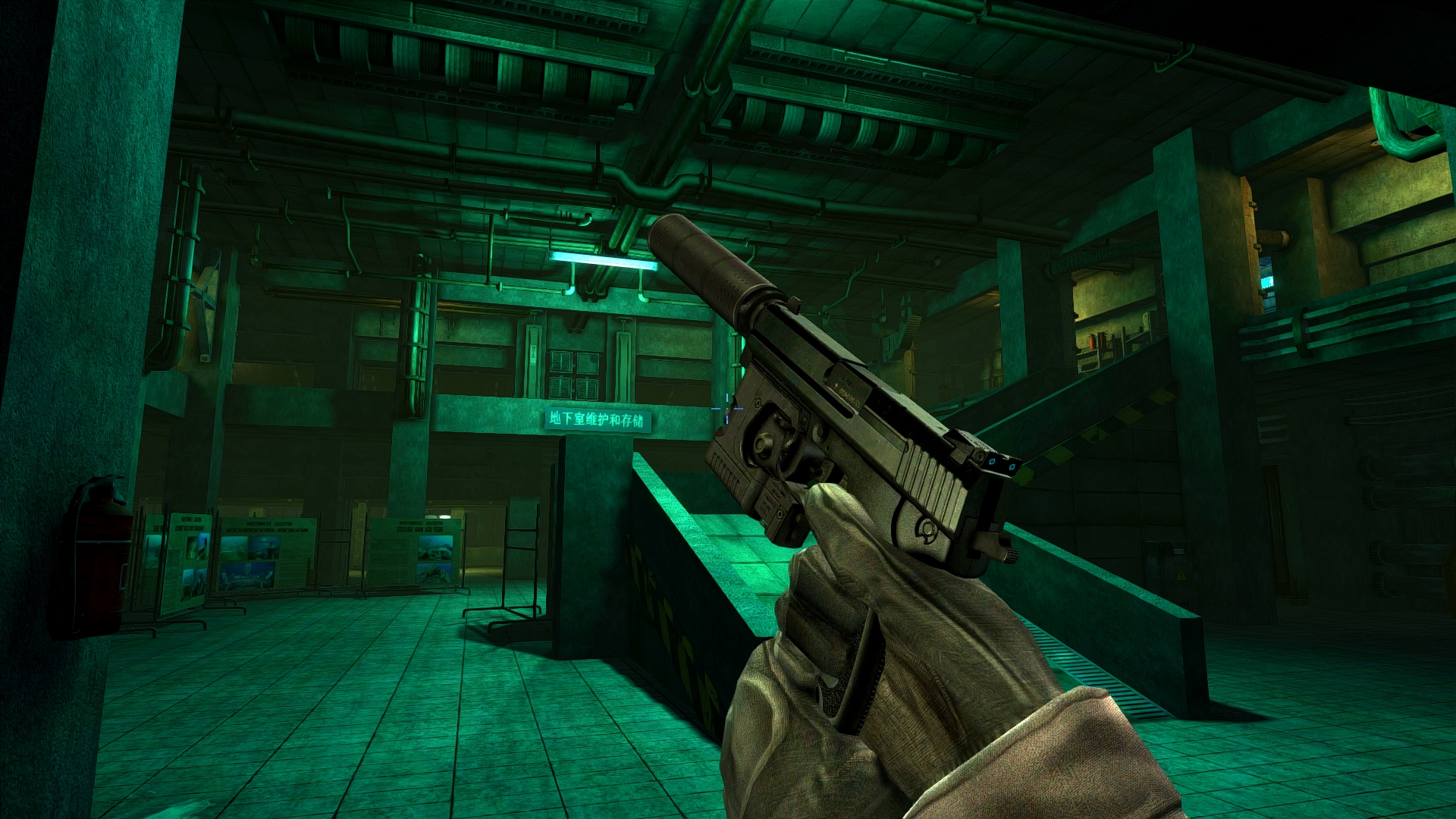 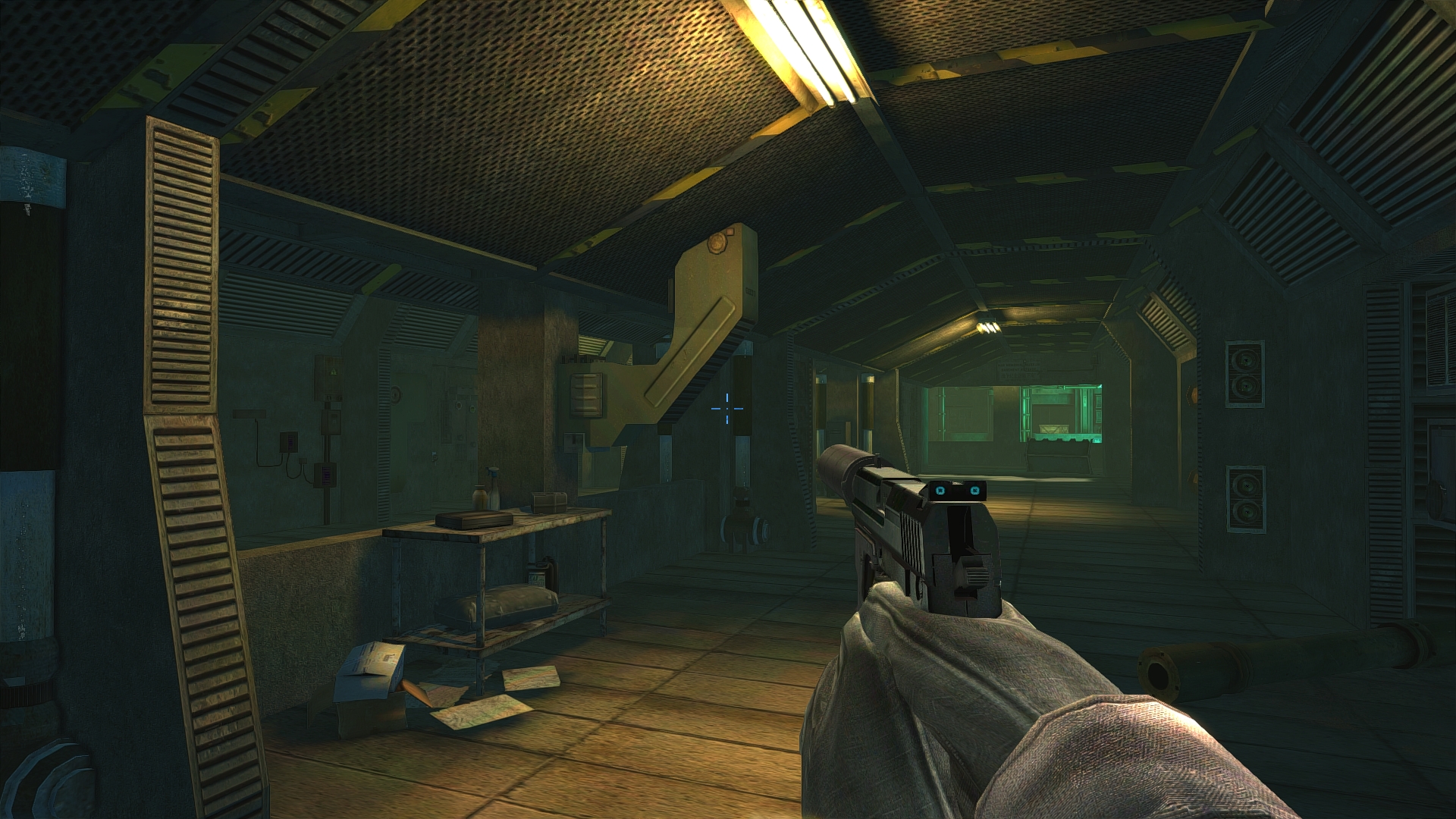 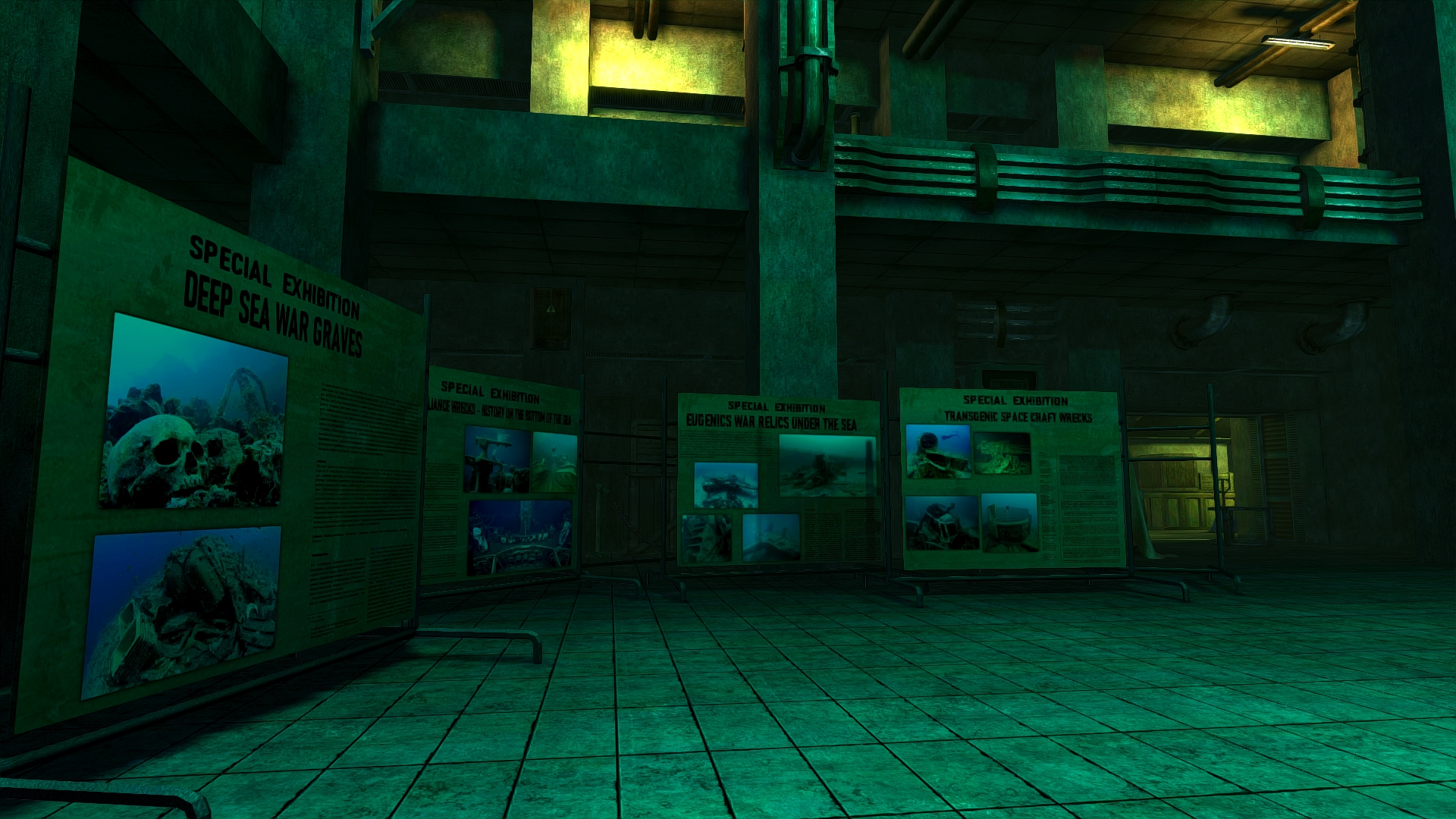 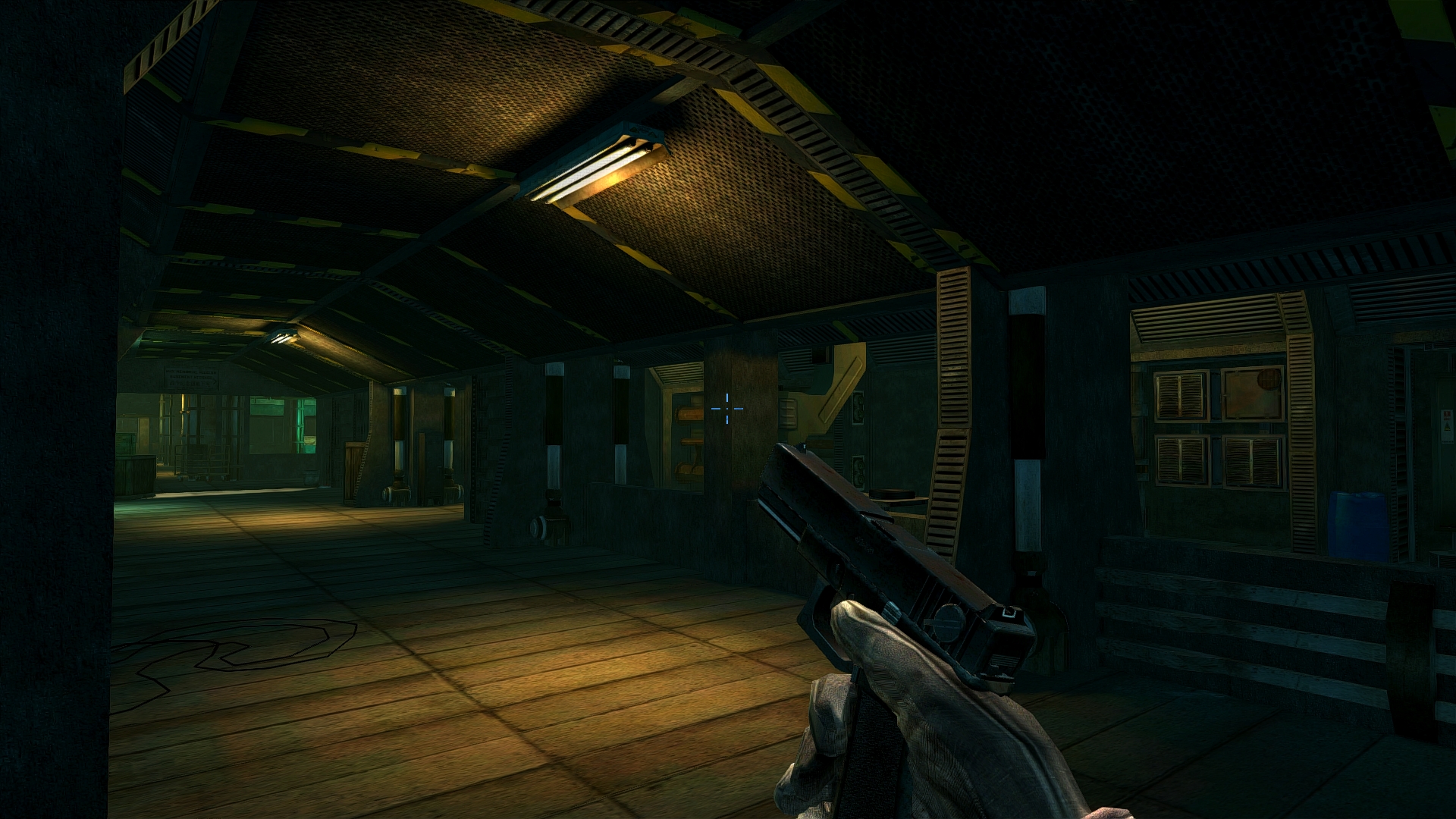 The war memorial museum is built on a former military base that has been captured from the enemy, hence its basement structures are remains from that installation. Its labyrinthian in design and features quite a few statues, paintings and former exhibits for flavor. The panels of the "deep sea war graves" presented above are based on a special exhibit in the trier museum of history that had similar informational pieces on the 30 year war. This also gives a greater glimpse in the world around you as it suggests the oceans to be littered with wrecks from the eugenics war. Kind of a "missing link" between the show - don't tell approach and just describing things in info dumps. Optional info dumps presented as visual story telling.

There is more to this level such as a war hero crypt with the names and faces of prominent historical figures as well as a wall blown out by explosives to show a hidden cavern. These areas, however are far from being done.

The SOCOM hand gun featured here is a place holder and will most likely be replaced by a far superior model of a silenced USP pistol later on.

The whole start of the game is very important as its the part that makes the player decide wether or not he is interested in the game so I decided to halt development on it and focus on some later missions first. Otherwise I will end up remaking it all from scratch anyway and this way I try to improve it as the rest of the game develops so it has the same or even better quality as other parts in the game.

The mission that is the furthest along is mission 3. Given that each mission is more or less self contained, I might also release the game in episodic formats or at least with a starter that allows you to launch each mission individually. A mission is 2 or 3 levels long.
Now this all largely depends on wether or not GG runs a larger game without crashes or media failing to load in due to poor memory management. 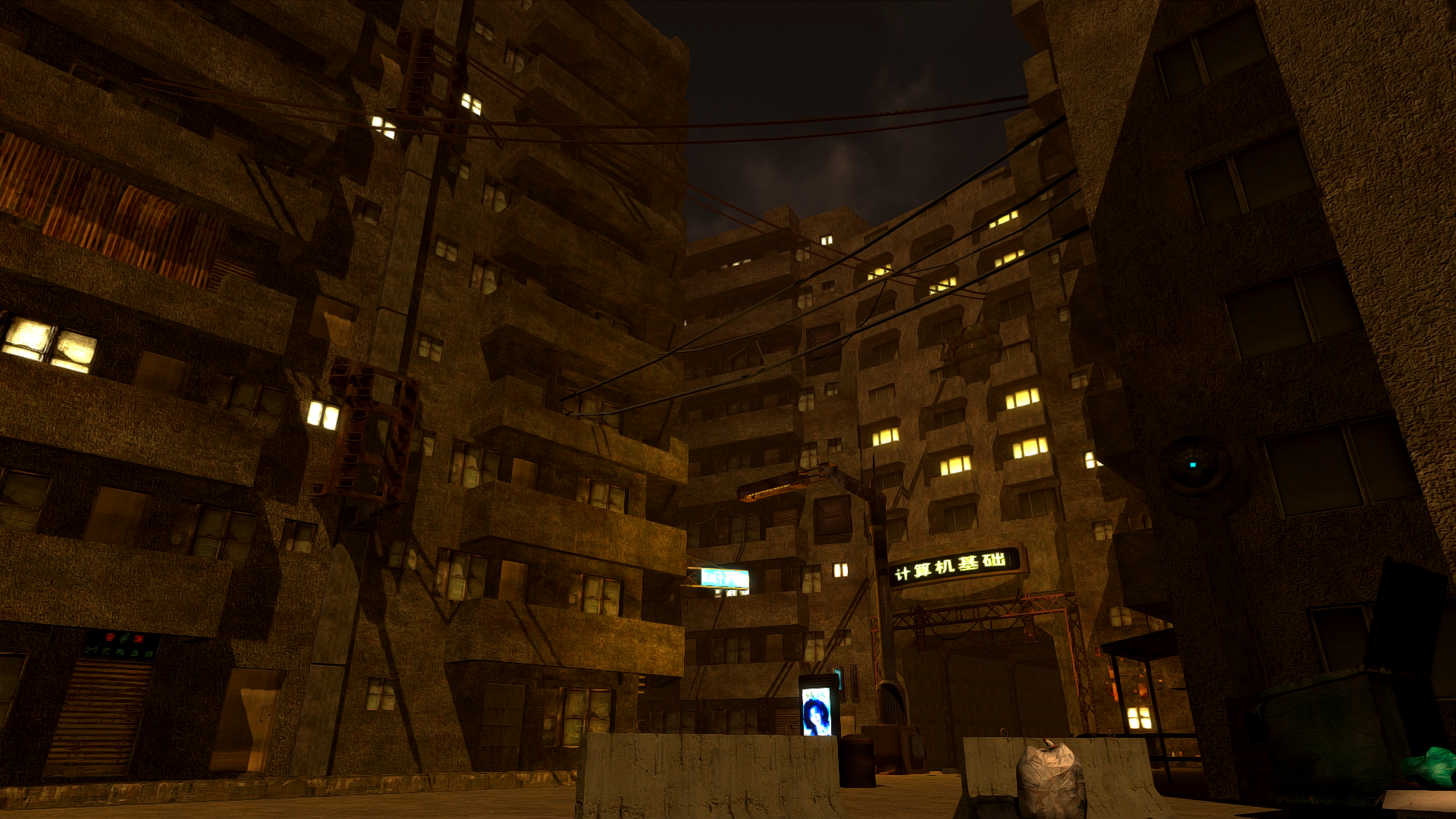 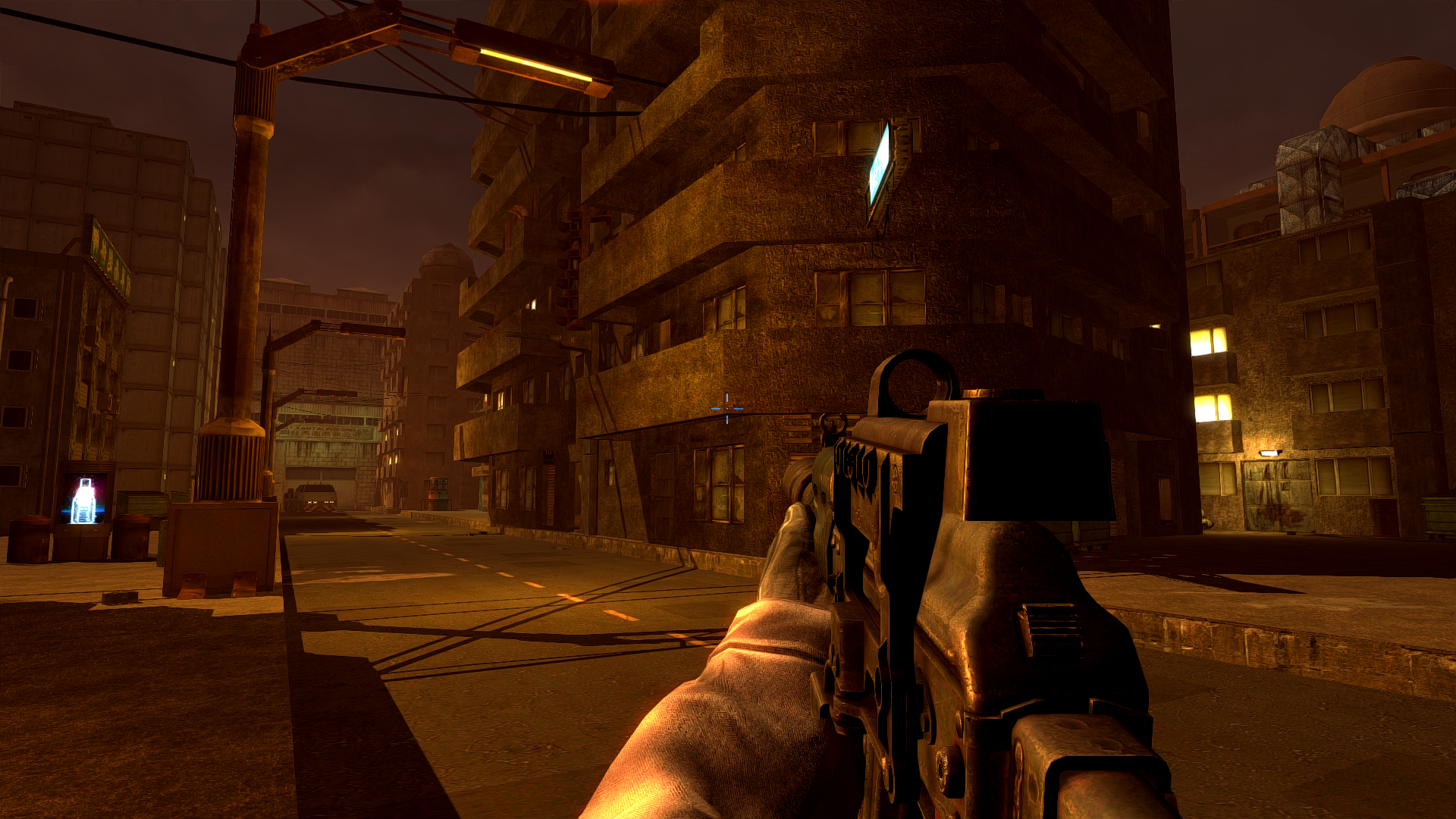 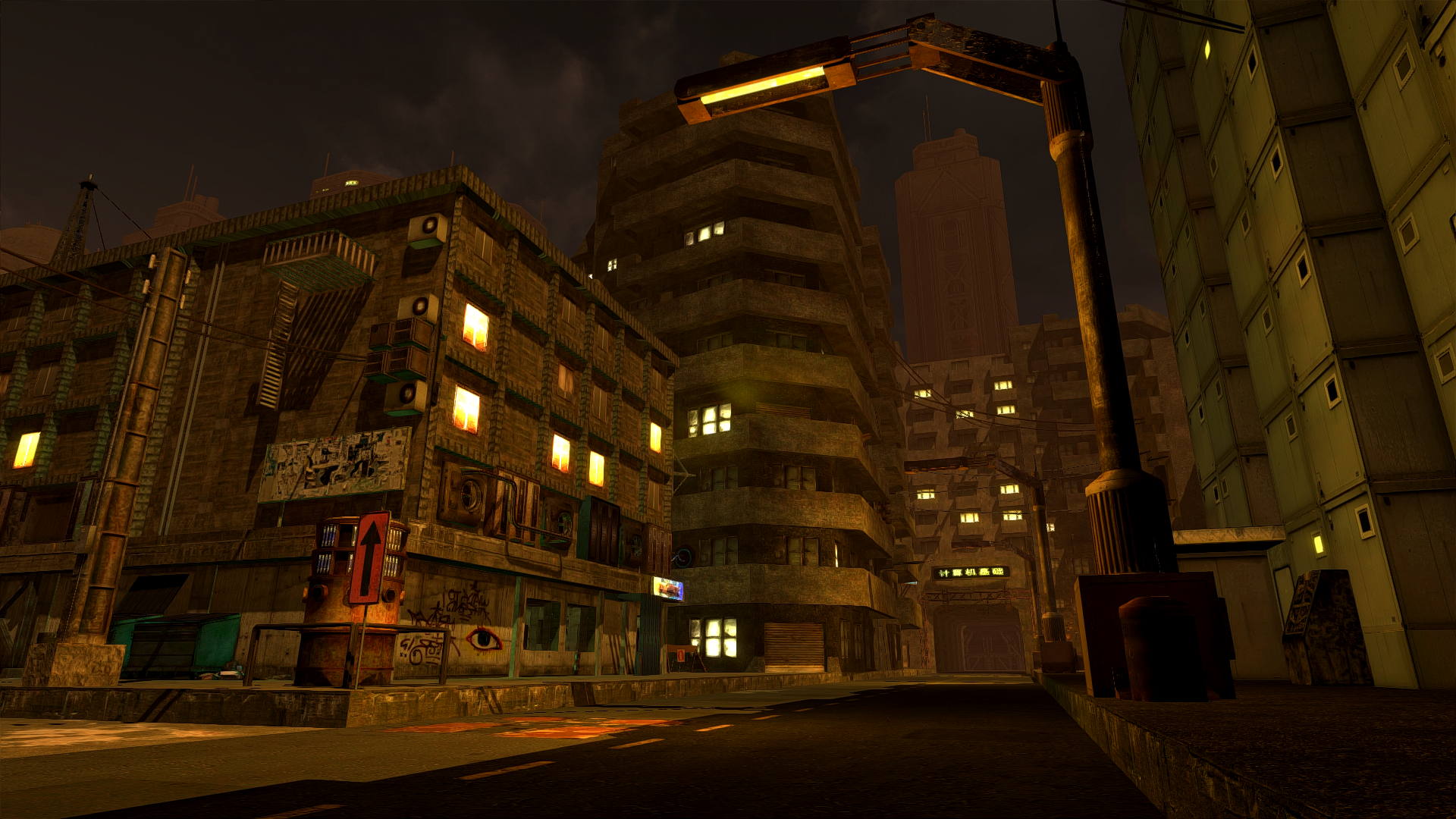 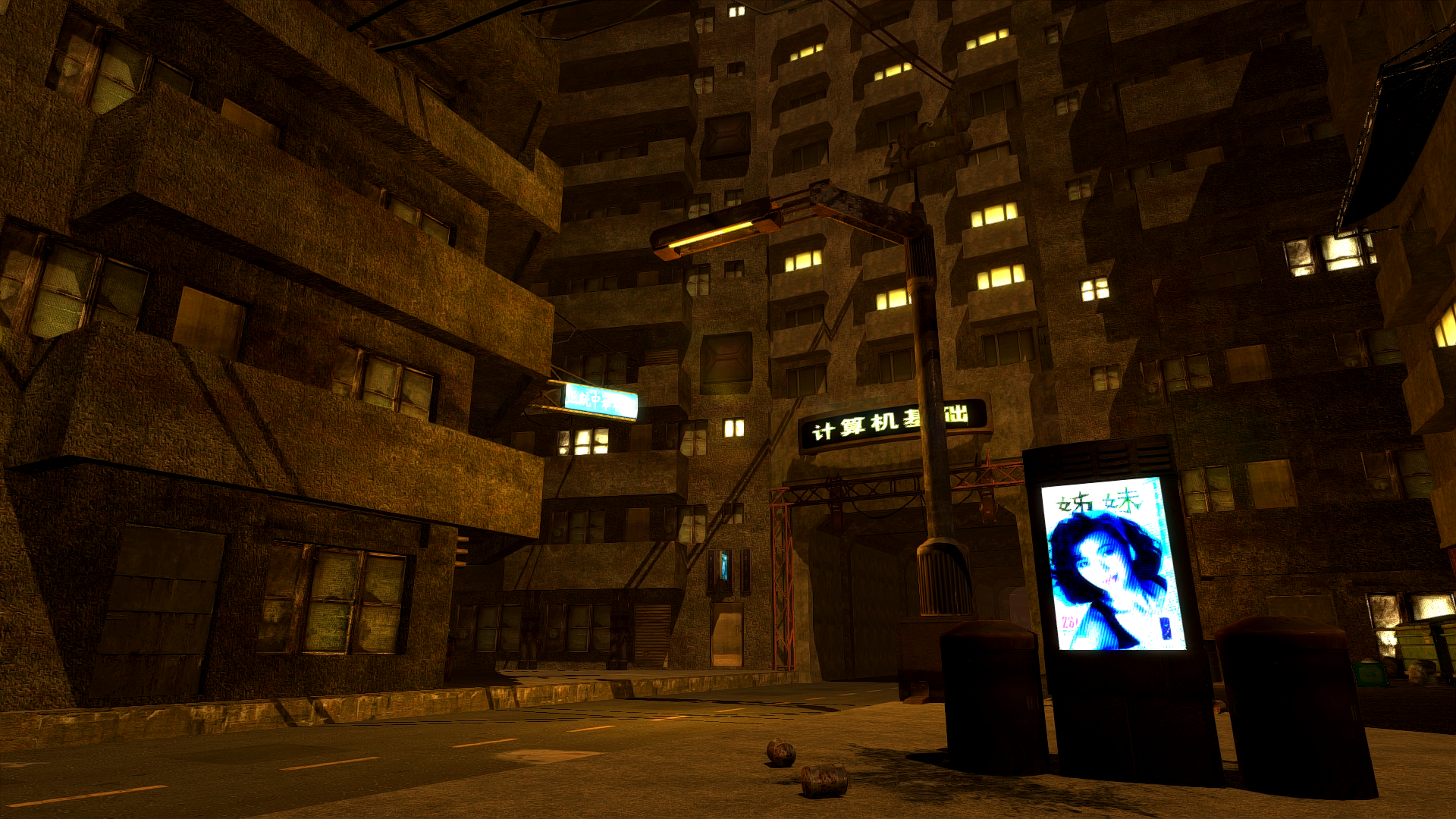 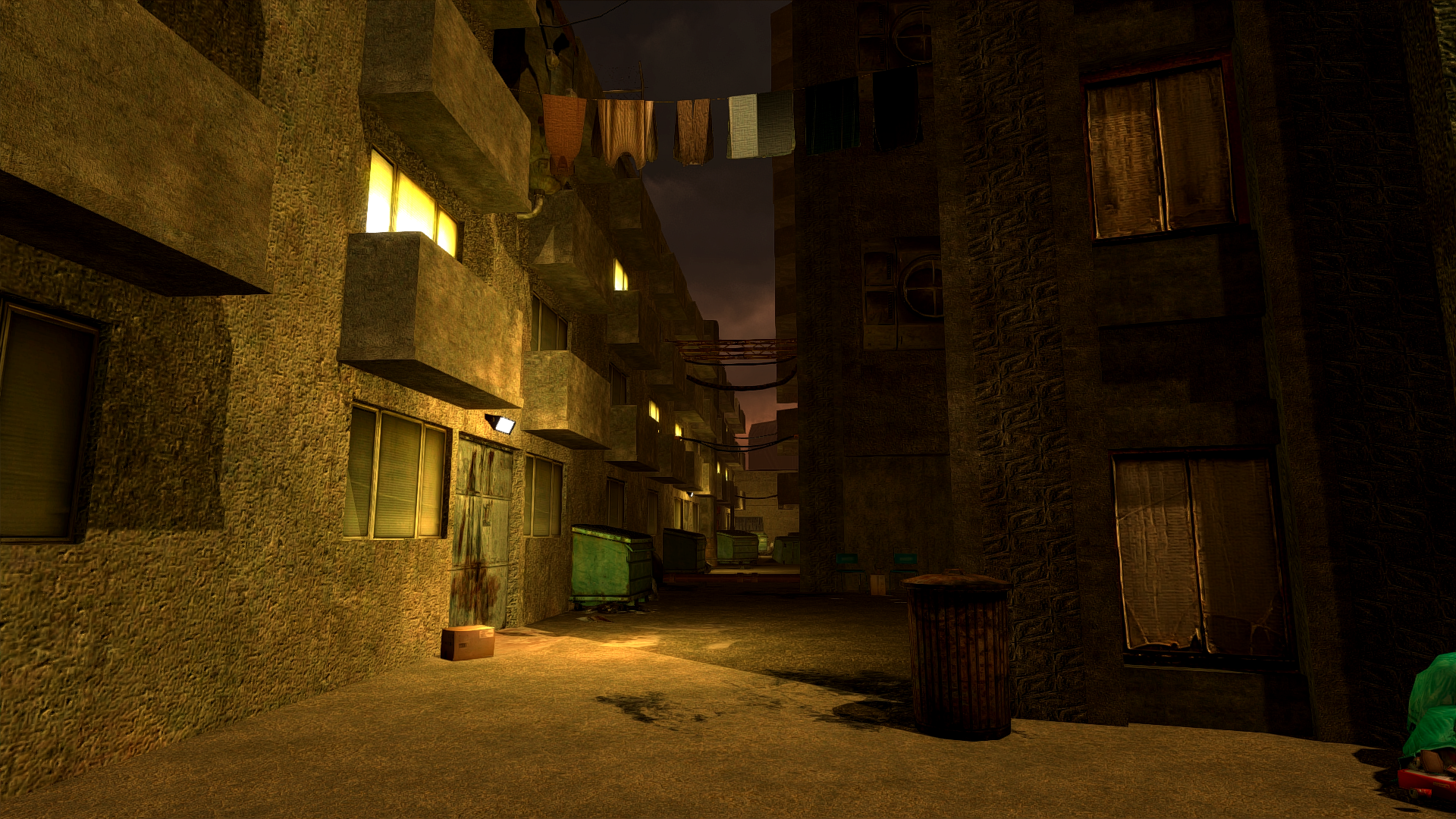 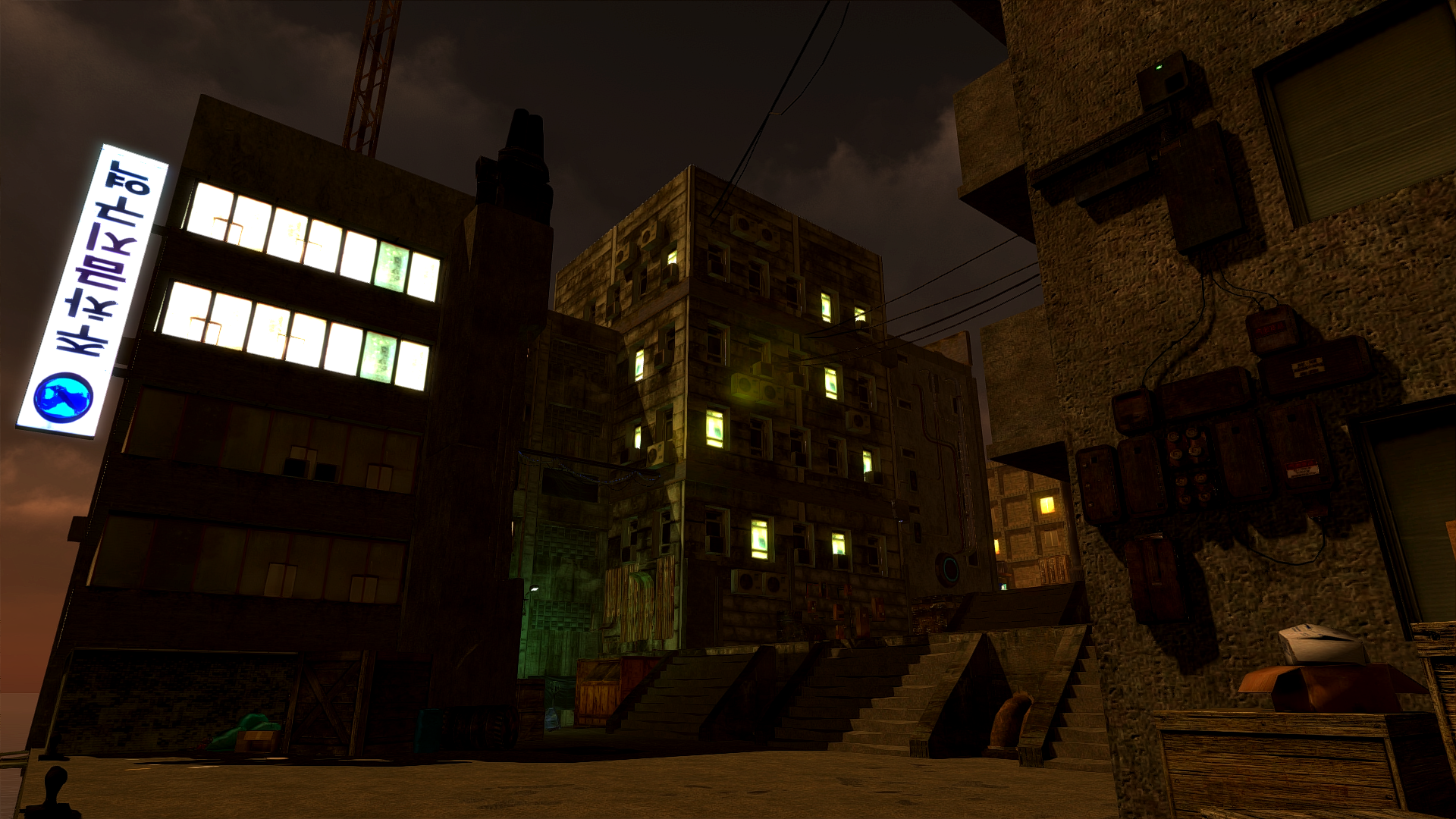 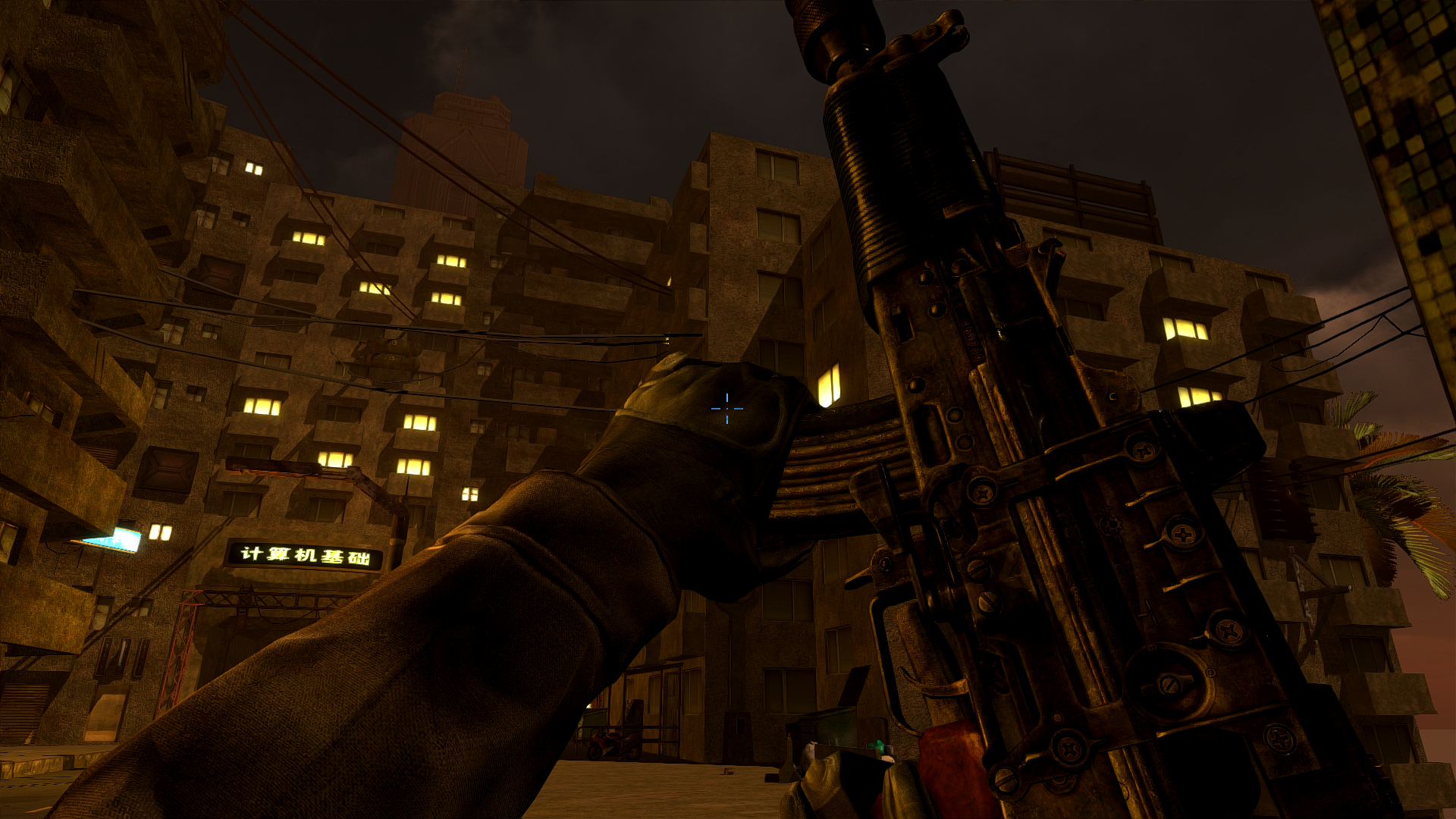 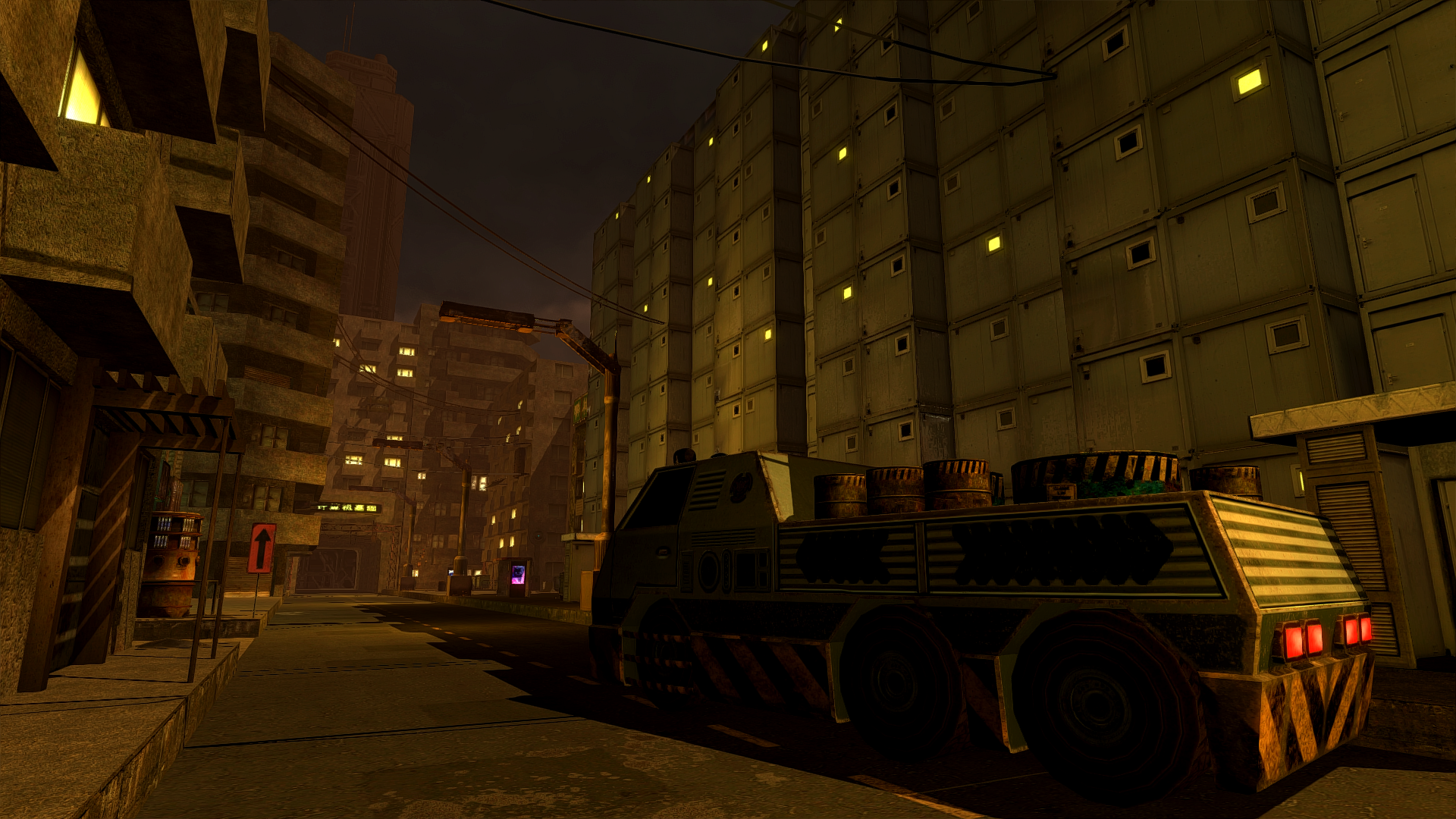 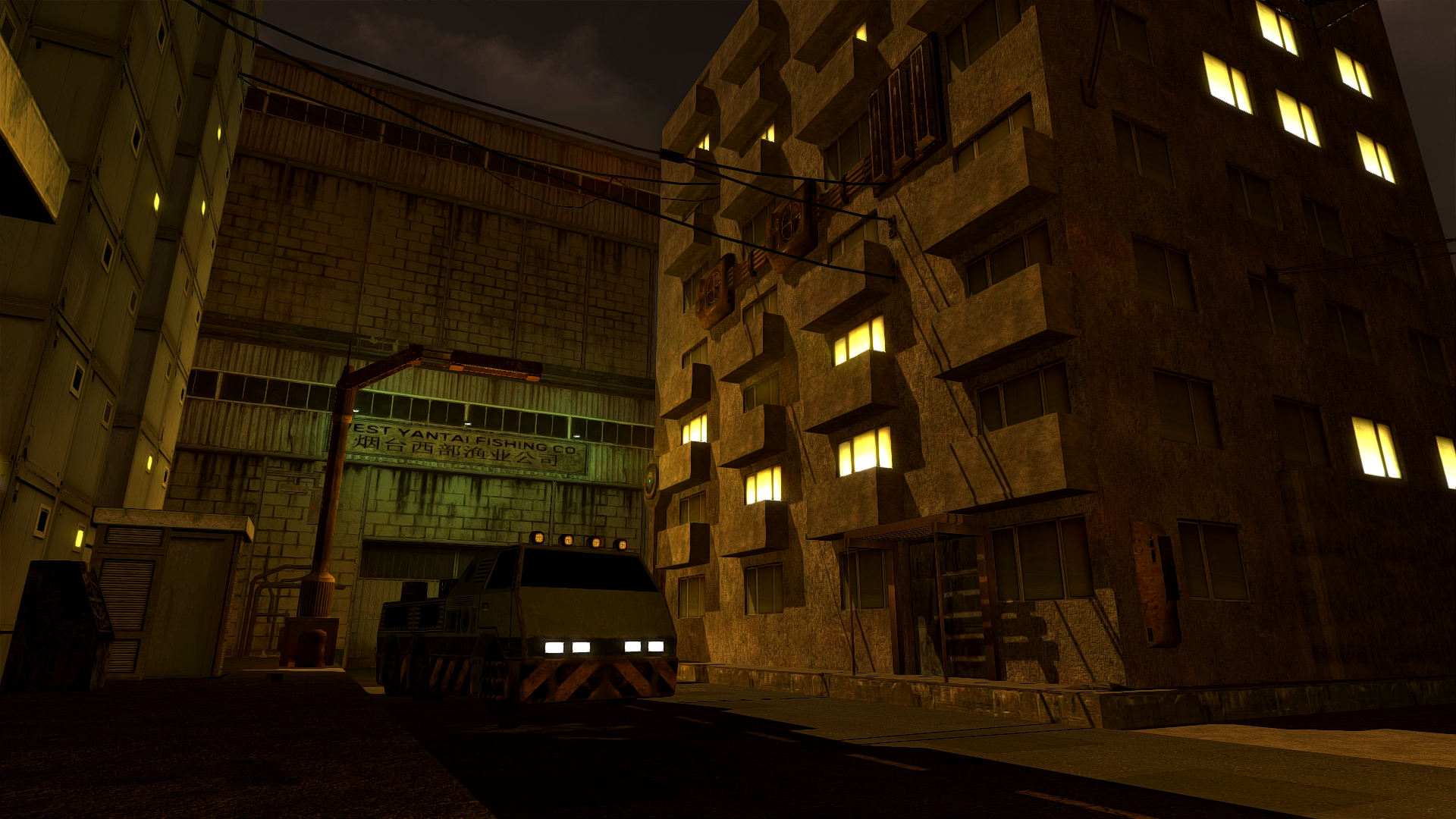 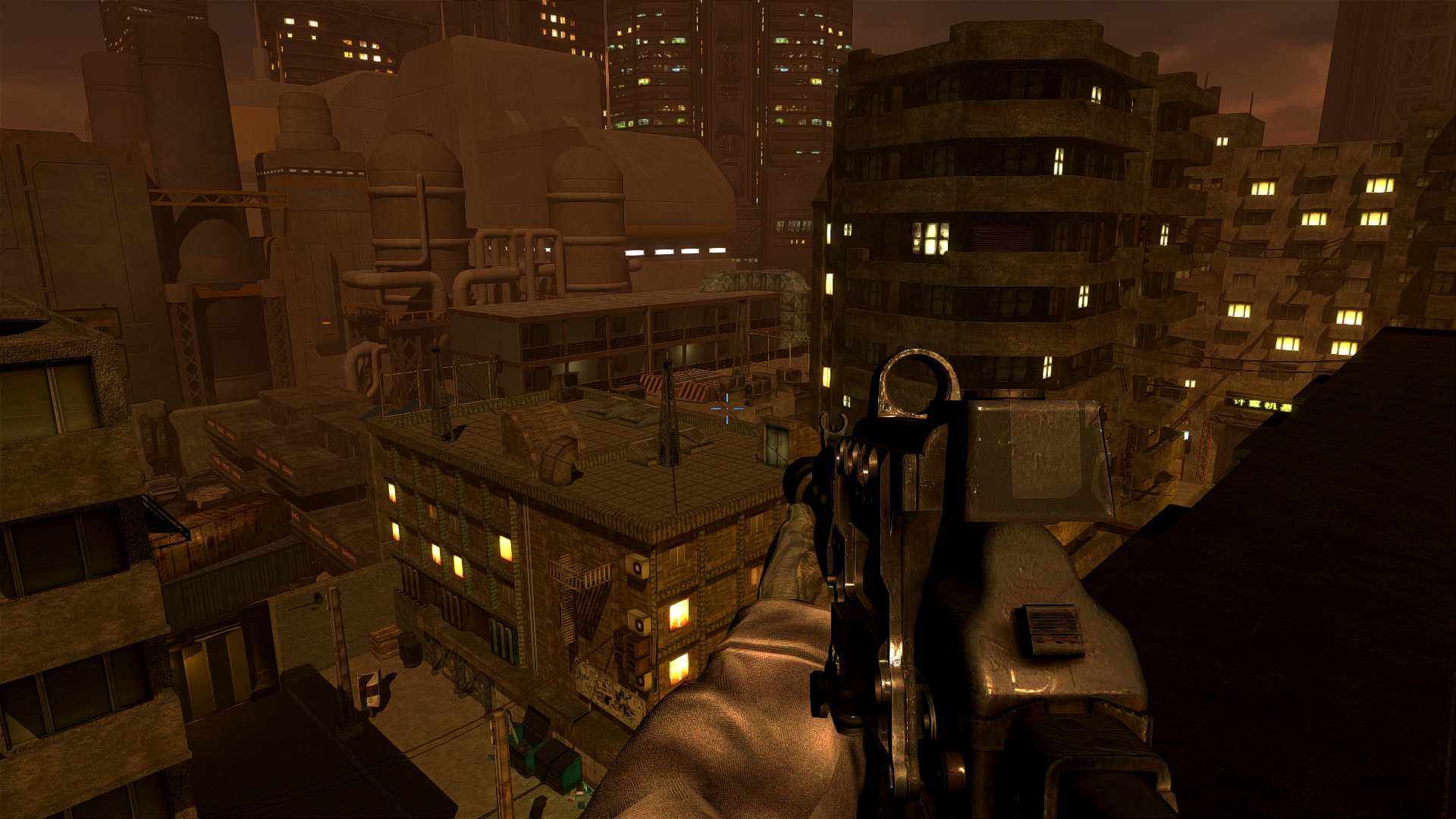 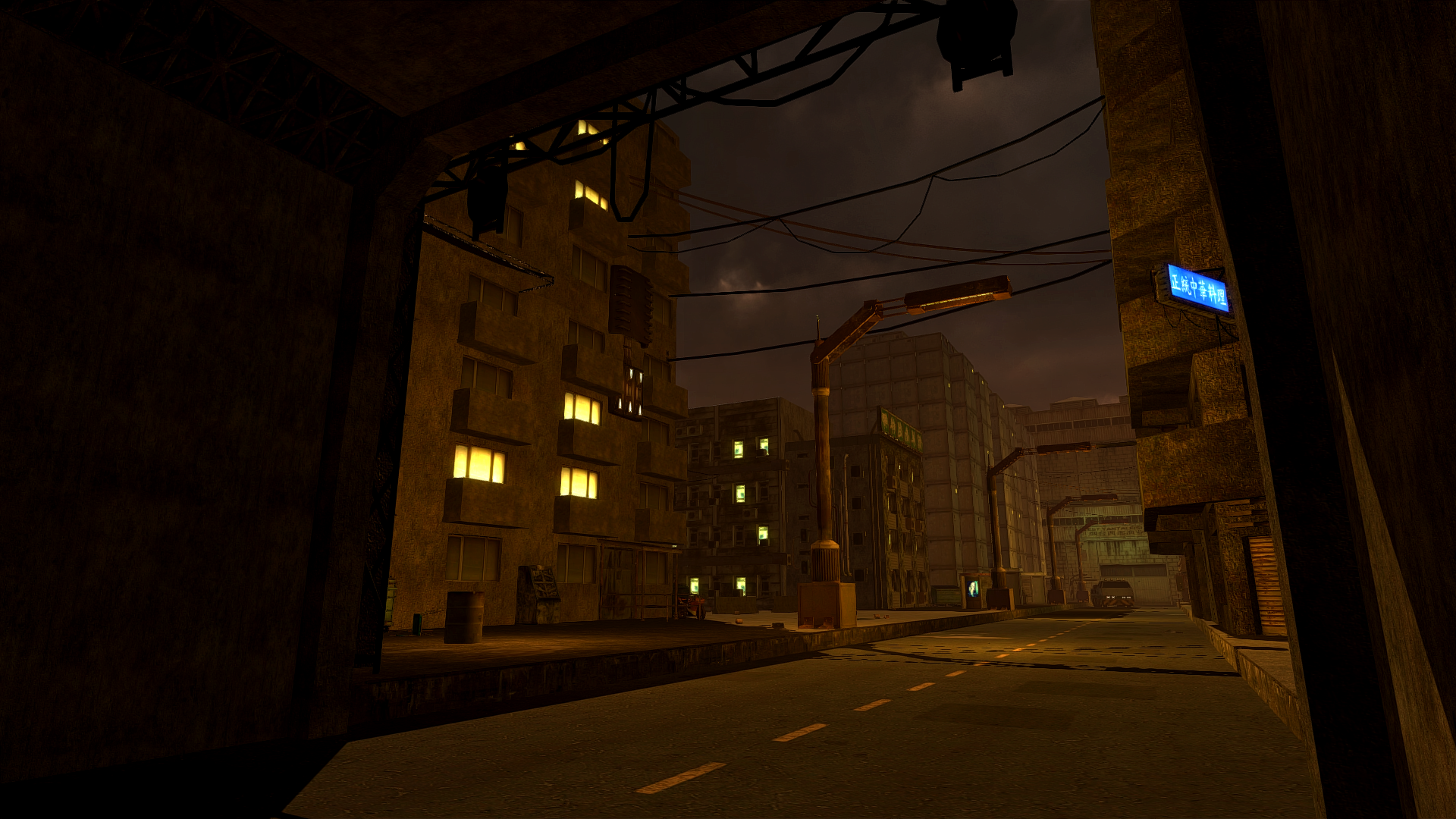 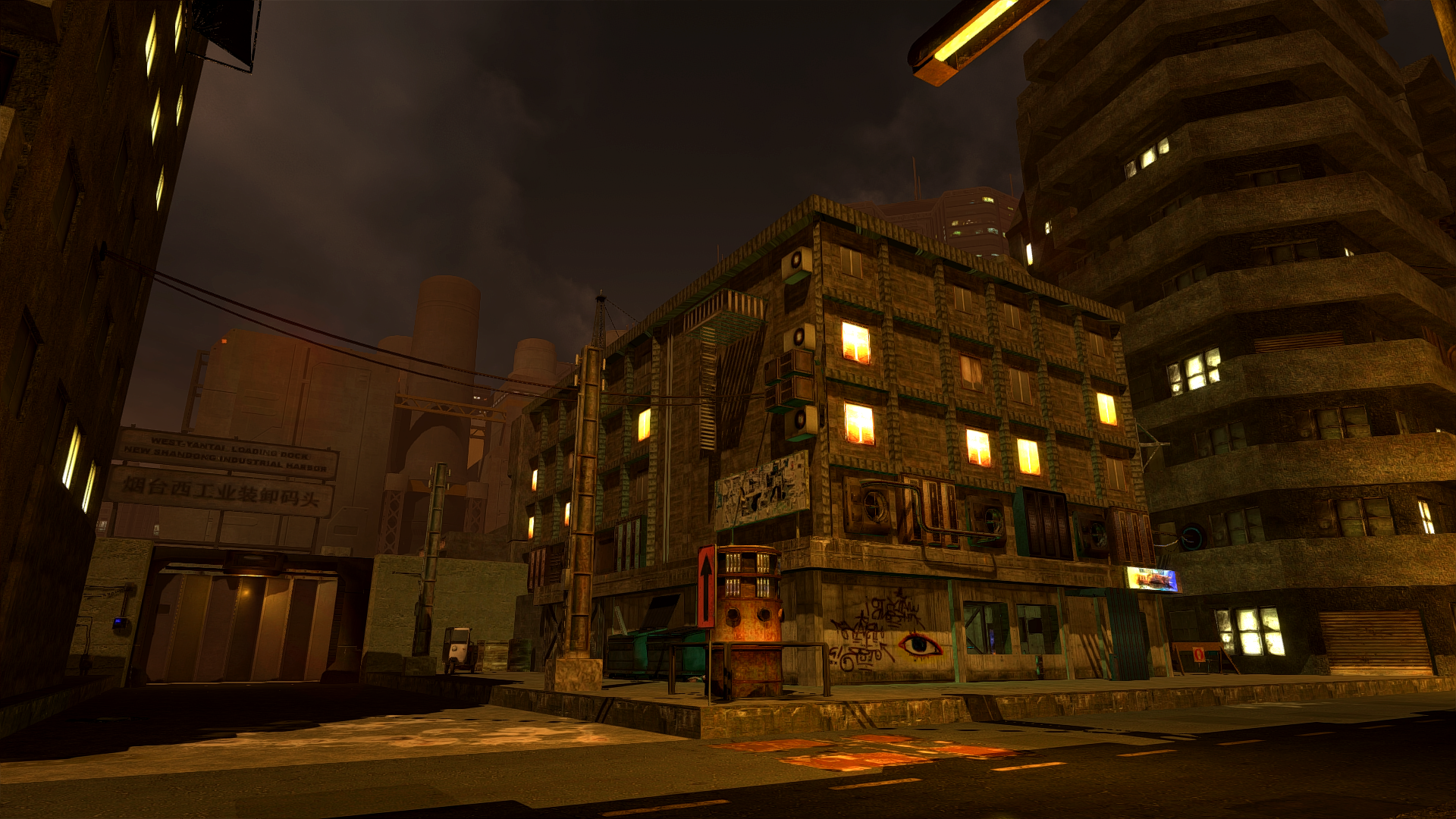 When the player arrives at the loading docks, he can first explore the surrounding areas leading up to the actual docks. This is a small section with some smaller businesses, derelict apartment buildings and a dingy bar. Here you can either hack the door to the industrial loading dock or find another way in, involving some rooftop climbing.
Now, just to say, I managed to get working ladders into GG with a simple trick that I will present later.

I understand that the pronounced sun-set visuals with the orange tint and the oppressive concrete and rust nature of the cities design does not appeal to everyone but I am trying to create a somewhat immersive place rather than trying to wow the player with lots of neon advertising and flashing lights. There just wouldn't be that much of it in an area like this and I hope that the restrain will make the game world feel more believable. Besides, I can not hope to impress someone with the way GG renders but I think I can make someone get hooked with some world building and exploration as well as believable places.

You can also enter the bar and chat with some civilians. Who knows who might have information that could be helpful to you on your mission?

This however led to another issue... err... civilians. What do I do here? I own a large collection of low poly characters from FPSC that would allow me great variety in models and are easy to retexture. However, as this game has loads of civilians, the extremely awkward idle animations and the fact that the characters, something players look at more than some random level prop, would be much lower in quality than the rest of the map. Then there are the higher poly characters I own. I'd have to do a whole lot of messing around with the meshes in fragmotion to get those ready and given that that would mean an hour or 2 of work PER CHARACTER, that idea was a pipe dream. Now there is also fuse, but again, I'd have to make every character individually and then need to set them up properly. What I did do was just use GG's integrated character creator. Why? These don't look half bad if you tweak them a little and I have several more of Bond1's models that are quick and easy to import into GG. You will see more of those at a later date as so far I just populated the level with CC NPCs for now. 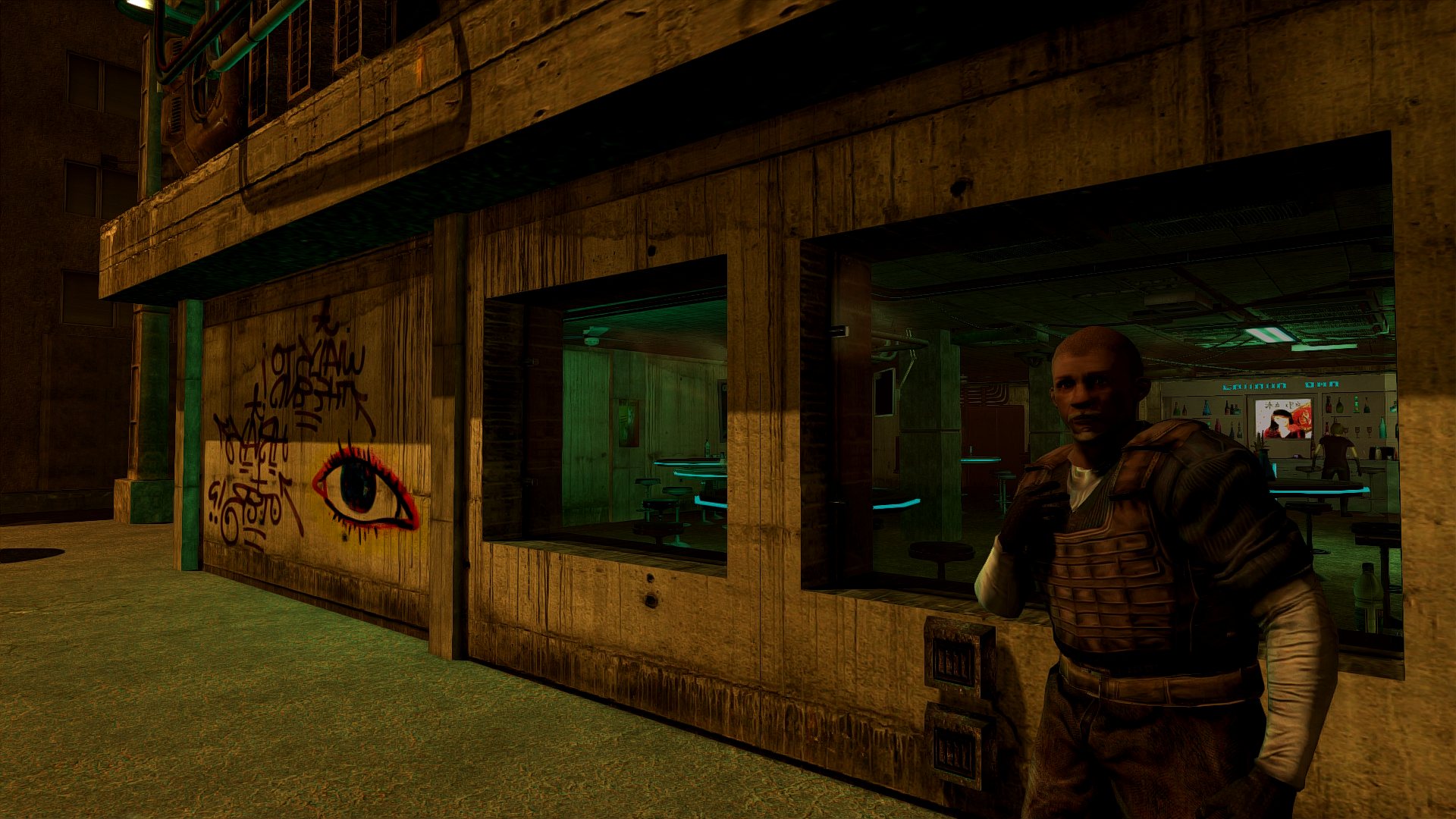 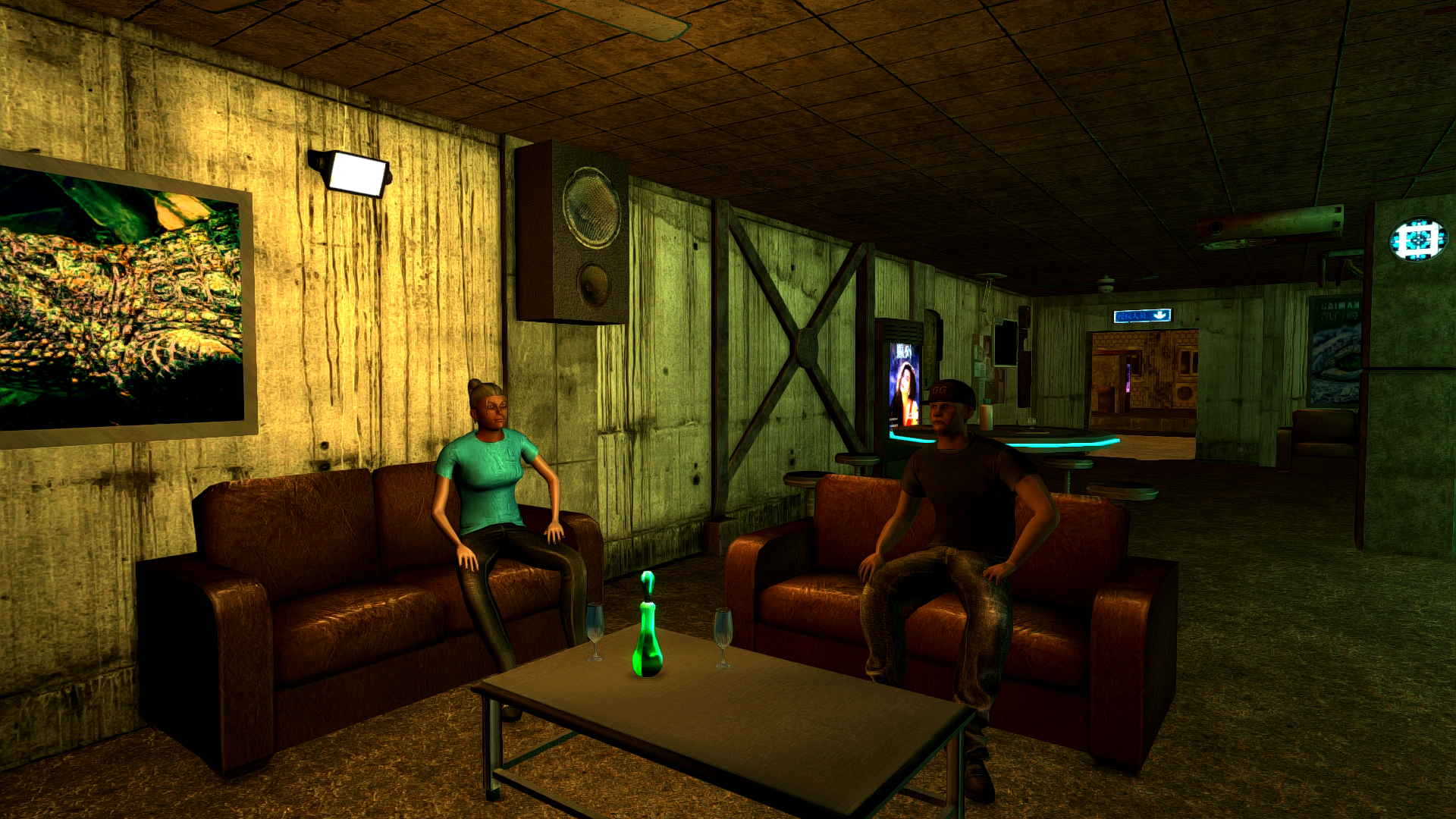 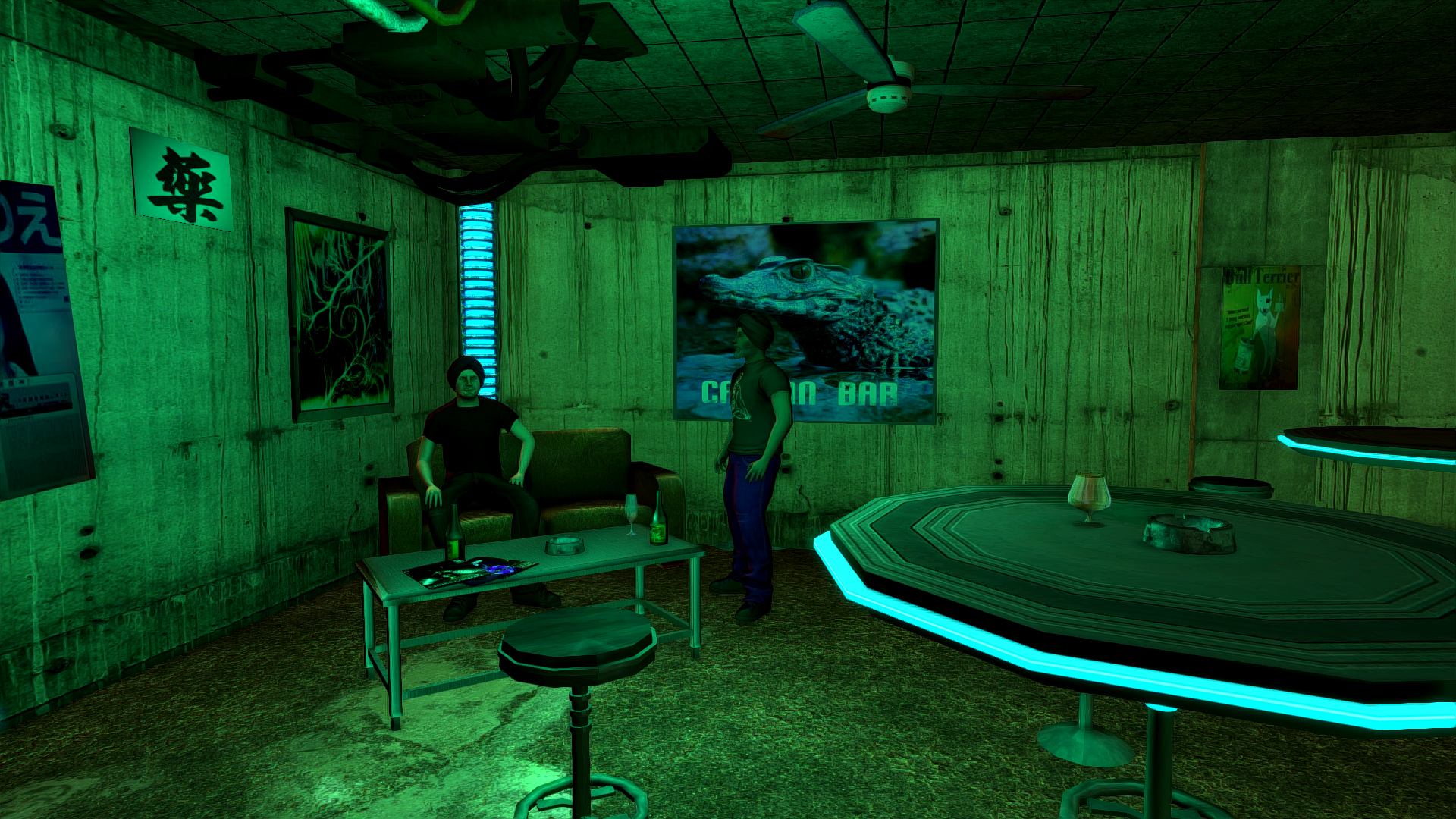 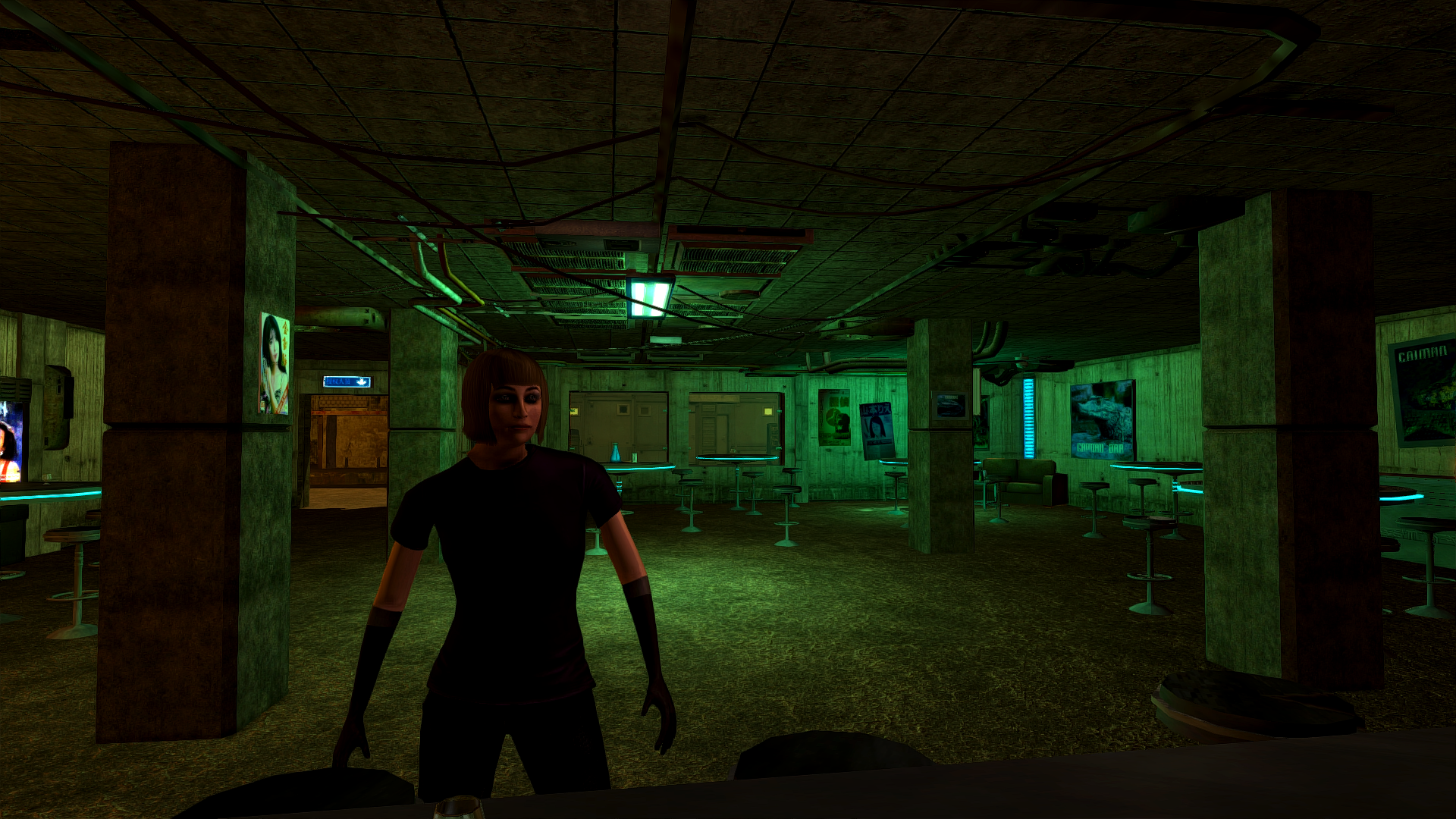 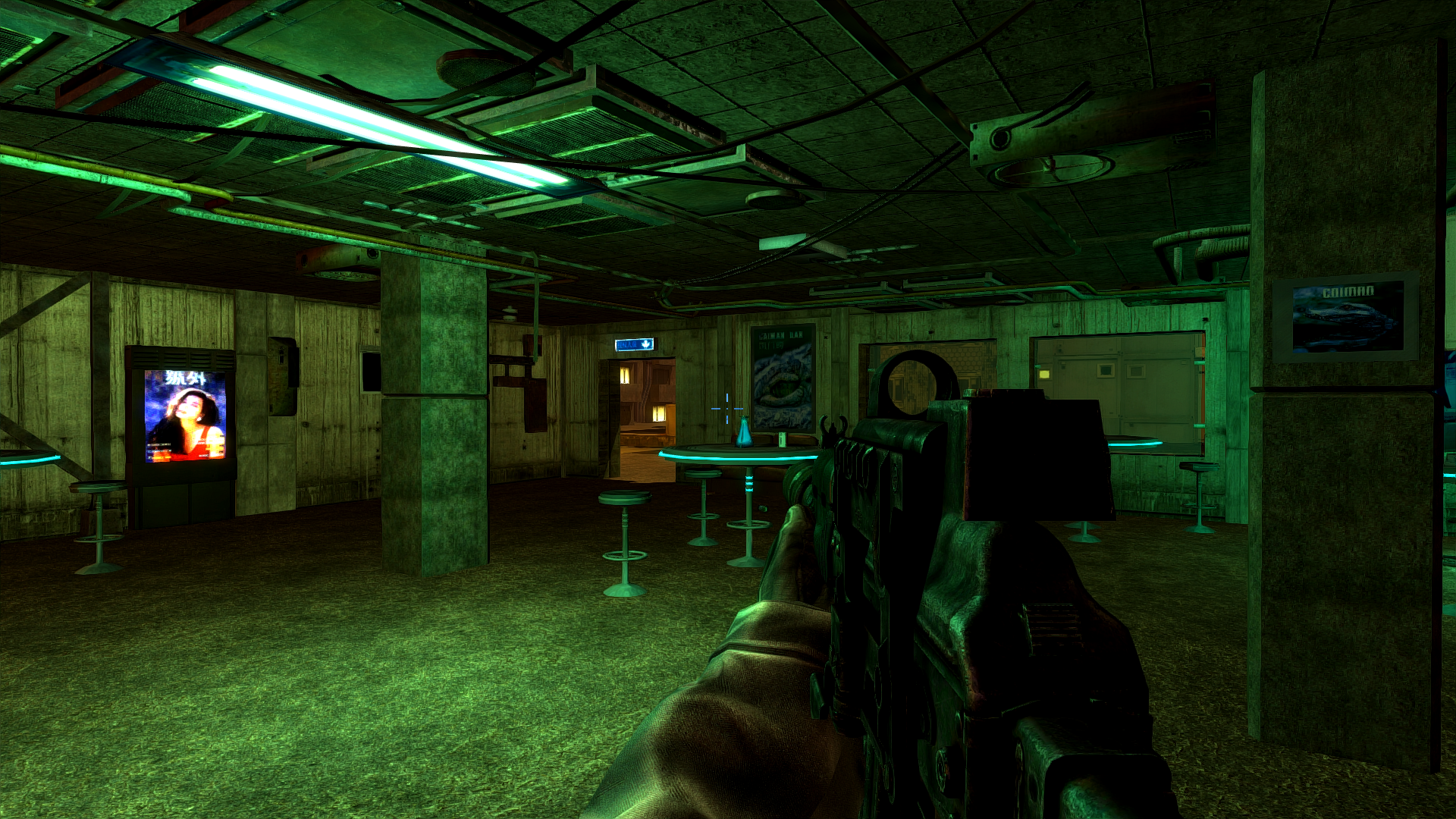 The caiman bar is supposed to be a run down, harbor side dive and I think it comes across

Now on to the other section of the mission, the combat area. This is a long abandoned loading dock that has been occupied by militia forces...err...the militia forces don't have a name yet but they are simple terrorist types that will be the enemies for the first half of the game.

This area is simplified in geometry to allow the occlusion culling to do its thing and provide good FPS while fighting enemies. This will be a trend throughout the game that should not be too noticeable. Areas where the player explores and can talk to npcs are more detailed than areas the player will fight in. Optimization like this needs to be done in a weak engine like game guru. 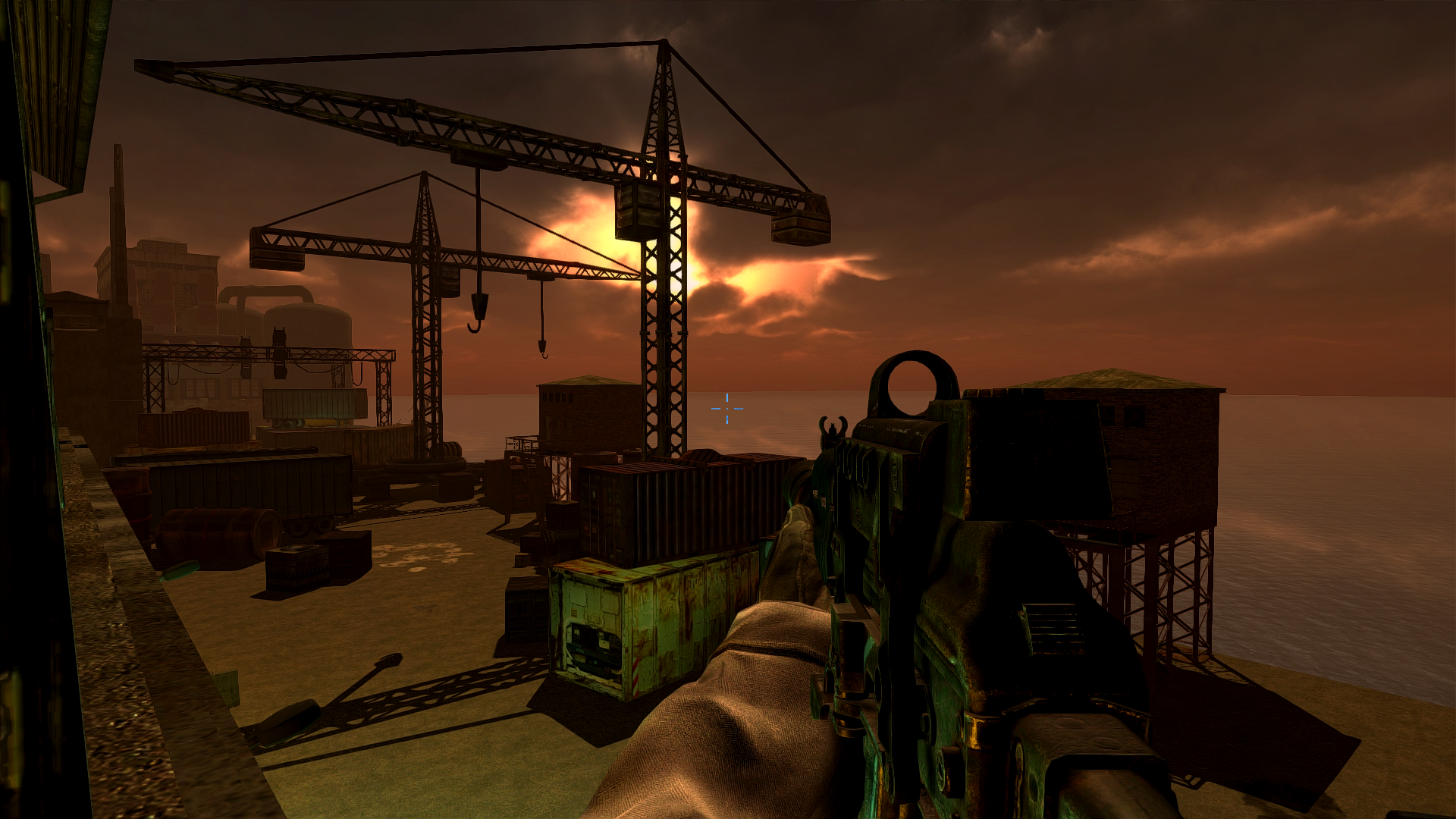 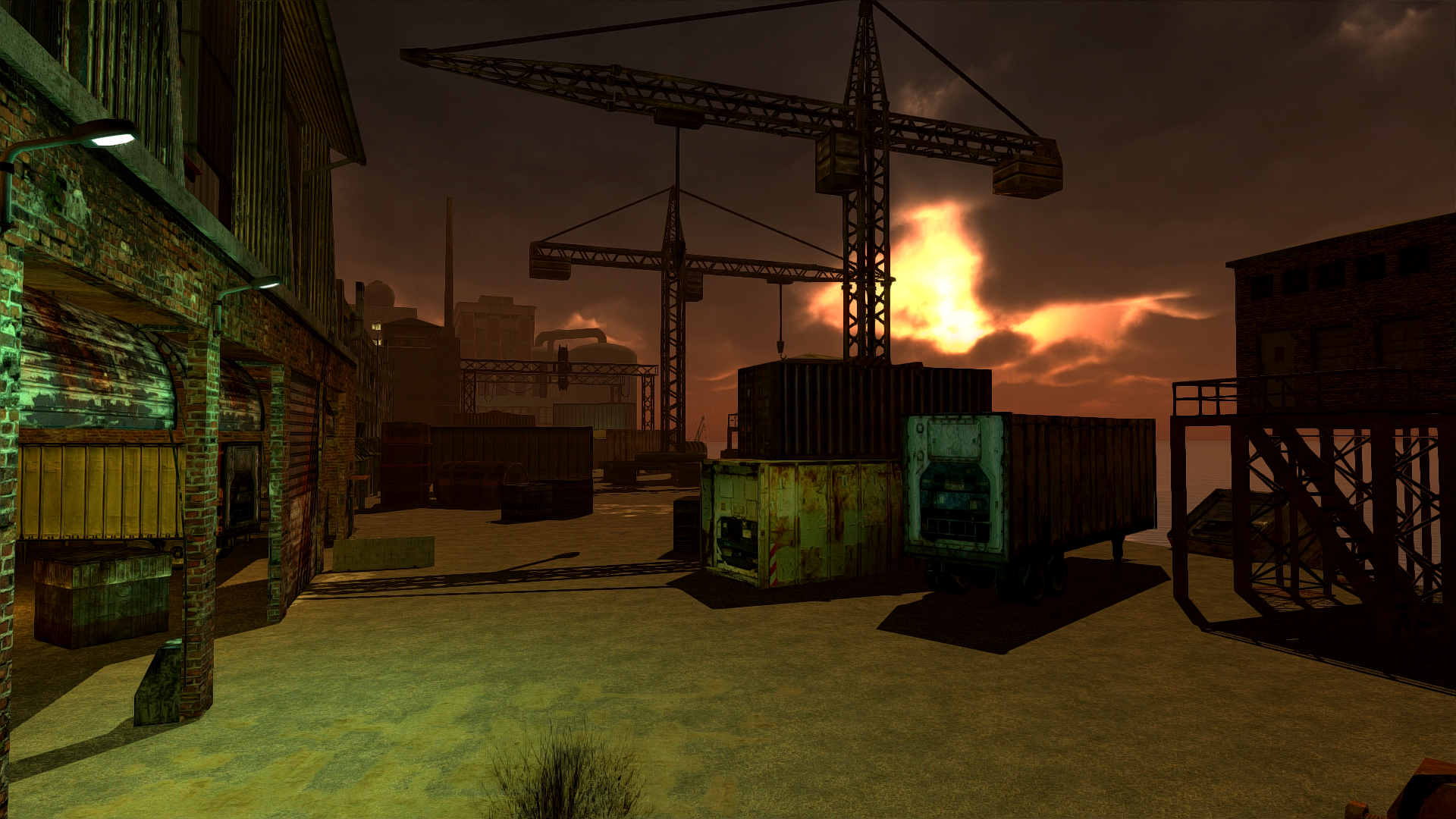 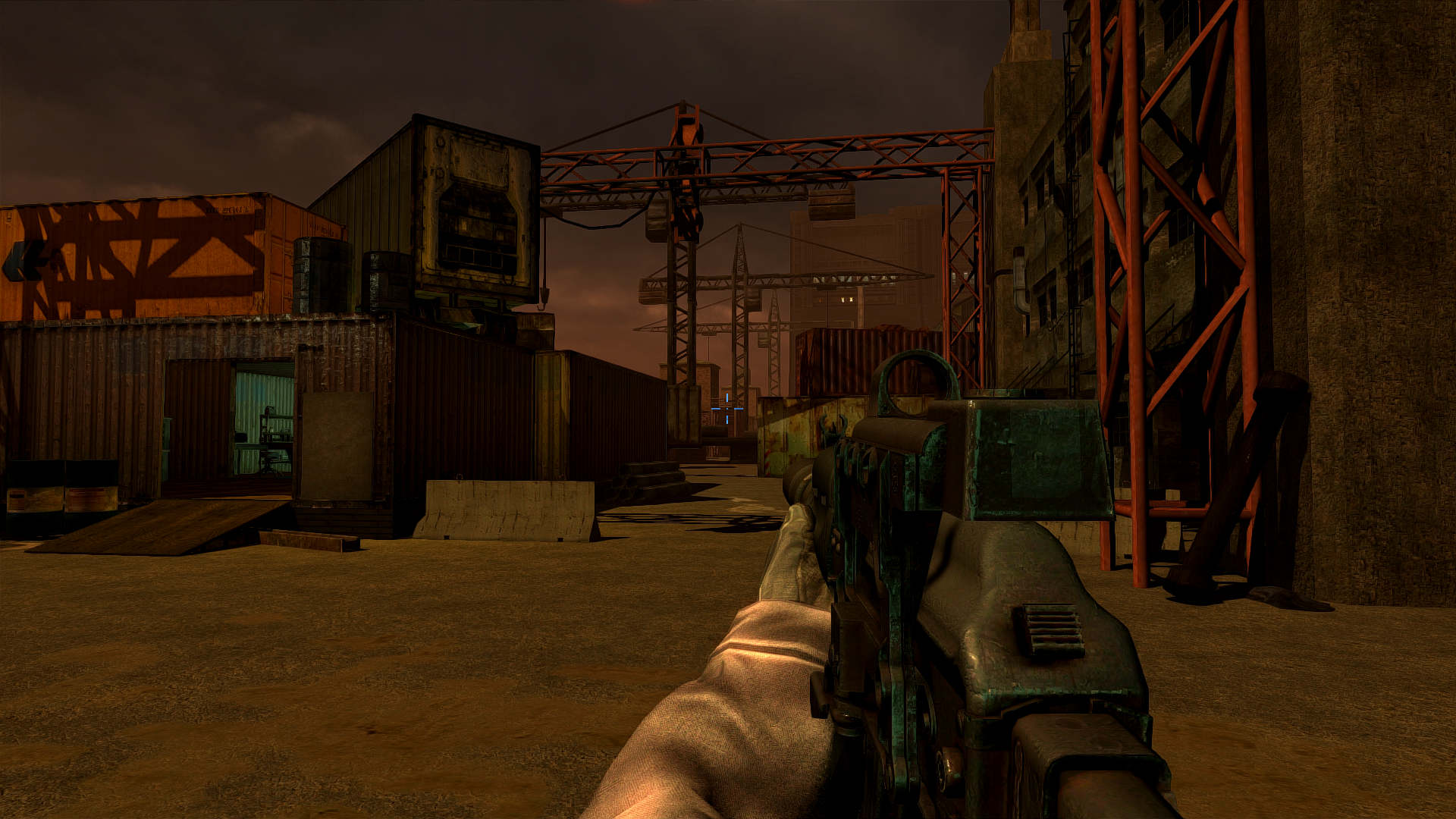 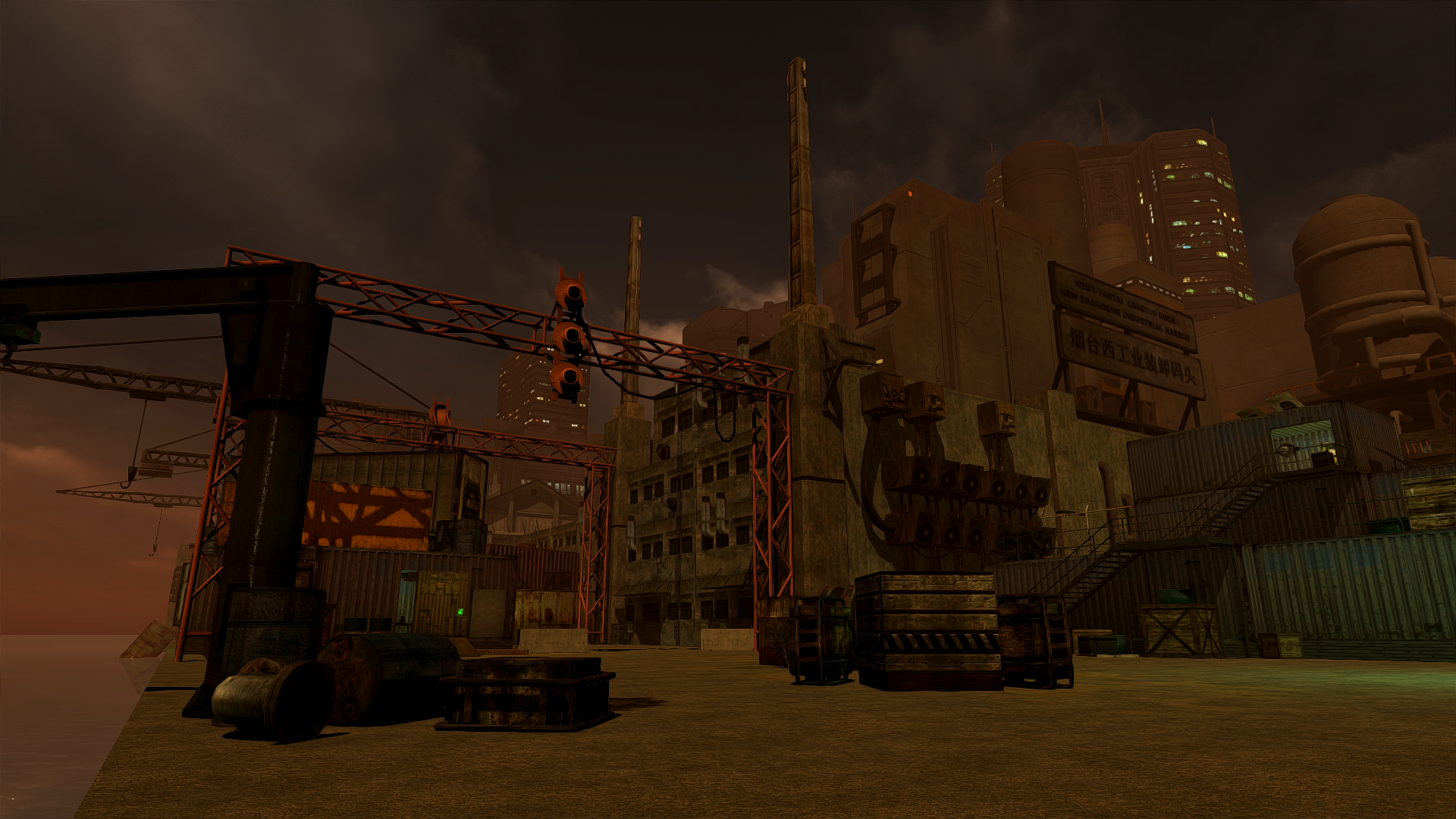 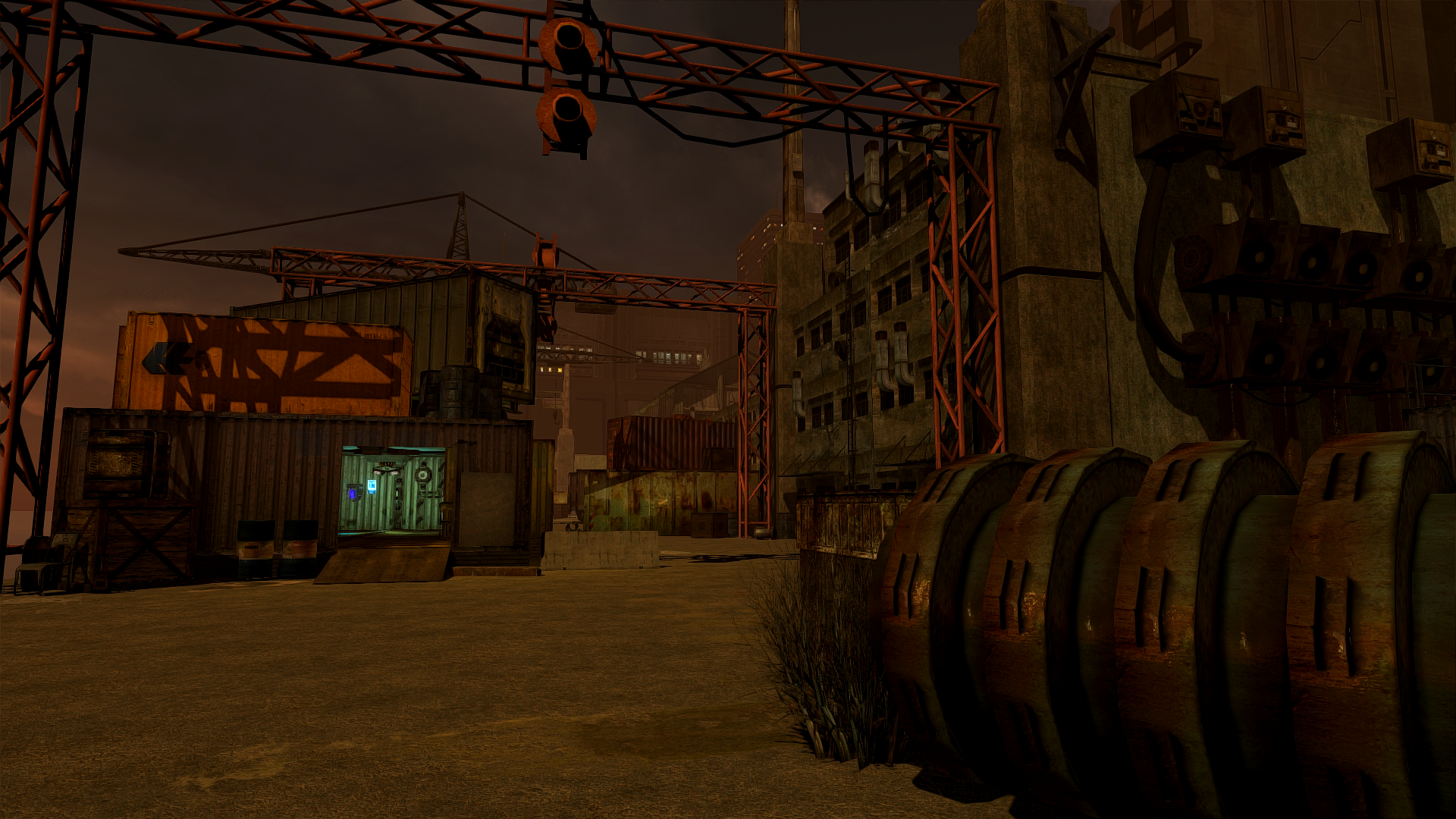 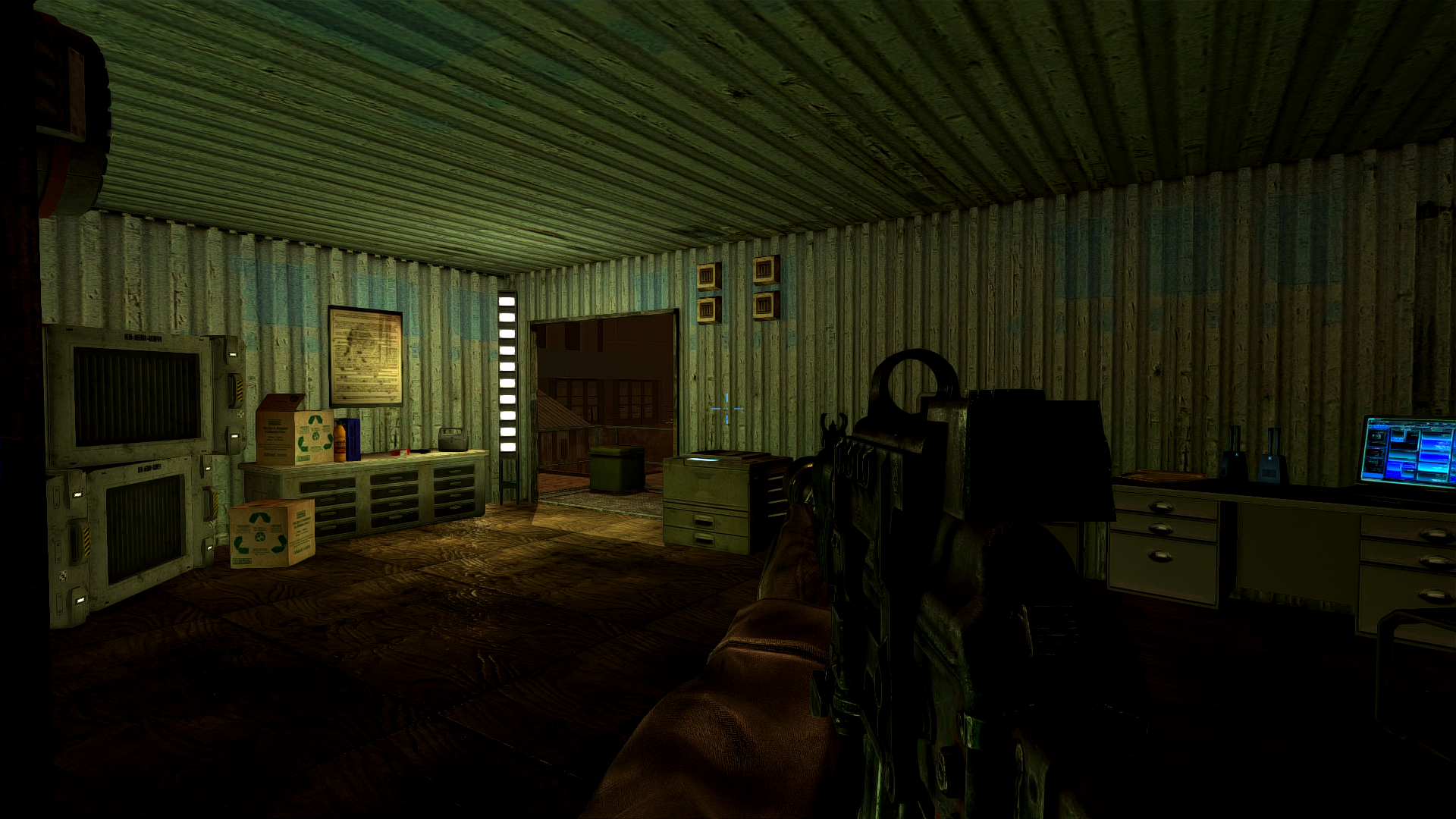 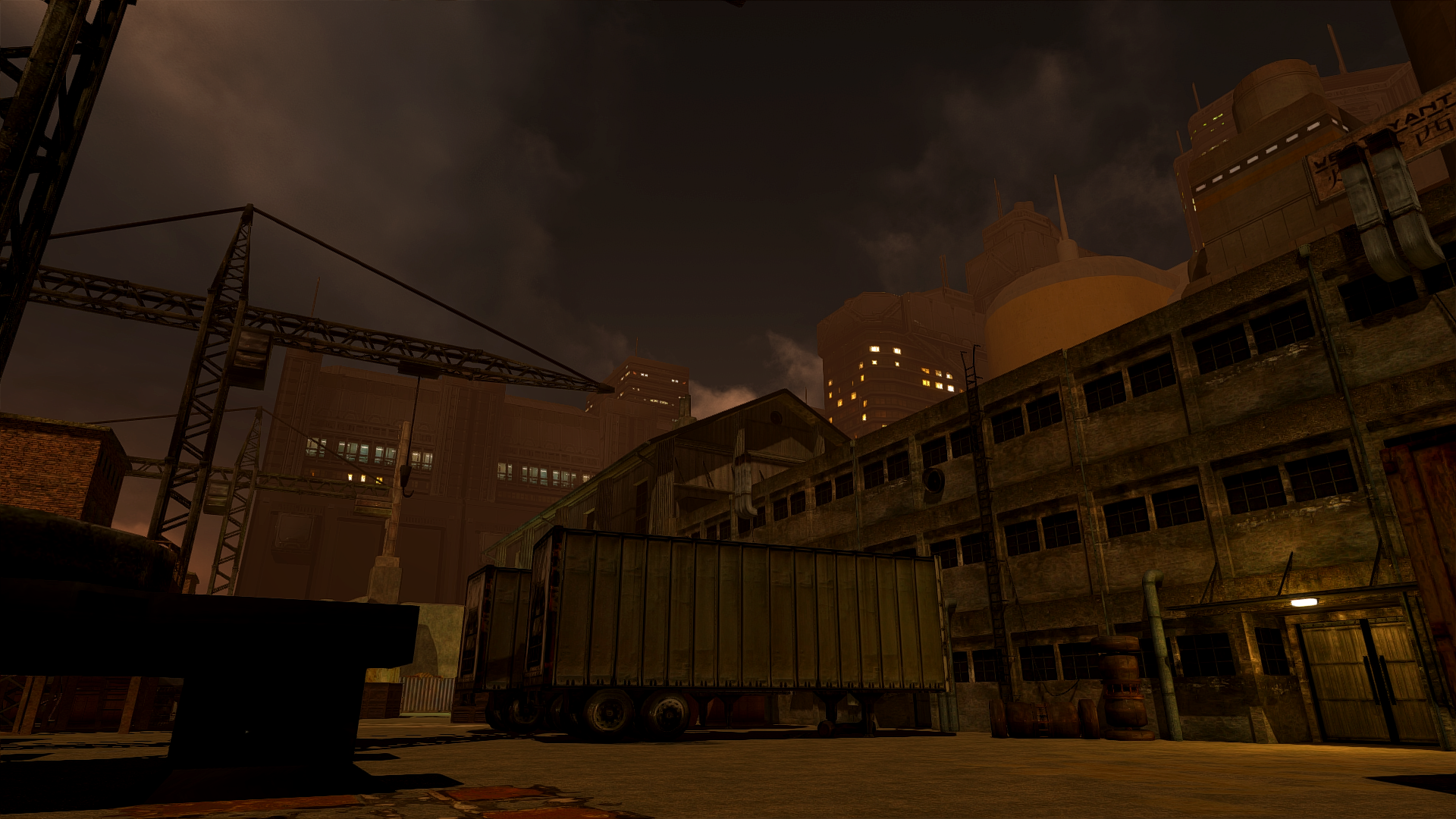 And that was it for now. Long post, I know but if you made it this far, thanks for your interest and thanks for reading!

As always, your opinion is greatly appreciated!

Please don't replace the MK23 SOCOM :( only a few games feature it