I'm happy to tell you that I'm able to finish the mod and release it before december.

I'll release two version (because of size of files):

The loading screens take a lot of place, as you can see...

In Space Hulk Reloaded, an ability "Screenshot mode" was added: it permit you to disable the HUD and make good screenshots and videos.
2 new maps were also added, one infested by the tyranids and the other by chaos, and 3 other maps are planned.
The balance was also improved, and a lot of new ennemies was added. 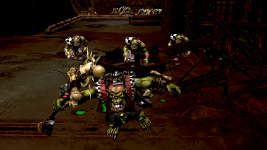 Orks: some people pretend they are stupid... they didn't met one of them.


Concerning Original Space Hulk, the other way of playing, the Terminators are already done.
Through the 12 missions (just one done yet), you will revive the campaign of The Sin of Damnation, a big Space Hulk infested by the genestealers...

You'll control 12 terminators, entirely customized according with the tabletop game, and fight against an other human player who will control the genestealers. 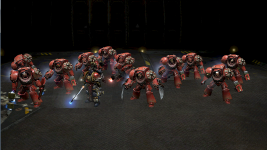 
These two type of games received a variant: the Hardcore mode.
It's simple: in hardcore, you'll not have minimap/radar, so you'll need to be very carefull...

So the mod is on the good way, and I hope you'll enjoy it !

I am disapoint. I thought this was a mod of the board game. Make it turn based I say!

Make a mod turn based is impossible with Dawn of War 2.
So I try to adapt the game to have a stressed gameplay.
There is two types of games:
- space hulk reloaded is a remake, it's a fps-like where you can met tyranids, orks, chaos...
- original space hulk is the copy of Space Hulk v3: the terminators have the same name, same story, same missions... but I can't make it turn based.

Interesting,models were edited and retextured? Cause original failic's units have horrendous low-res textures, sometimes lack detail, and too much of that absolutely unrealistic shining to mask those lousy textures. They made DoW2 in such a way that it's engine "primogenitor", CoH, looks WAY better.