"The RPG-7 is a rugged weapon that will surely change the face of combat forever."

The RPG-7 is a brand new, inexpensive anti-armor grenade launcher used by the Soviet infantry forces. Mass-produced for an anti-tank role to ensure squads have appropriate countermeasures against Allied vehicles, the RPG-7 is a rugged weapon that will surely change the face of combat forever. Part of its ruggedness comes from simplicity, and a notable lack of internal or external guidance systems; users simply point and shoot. While this makes it less than stellar at long distances and difficult to aim against aircraft, lacking even the cursory guidance the LAW features and poor fin stability, most vehicles' armor will quickly succumb to its fast volleys. 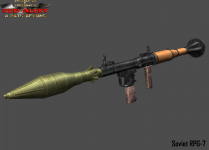 While not intended for use against infantry and without perfectly level flight, the RPG still can harm infantry in close quarters. Due to a lack of stability and absolutely no guidance systems, the rocket projectile tends to form a very lazy arc. This requires a user to aim above their target at longer distances, but against structures, aiming is a trivial matter. An alternate firing mode will disable the timed fuse on the warhead but results in less thrust, making it worse for long range engagement but excellent for mortar-esque attacks or when fired from hills.

Its ballistic behavior performs best against slower vehicles and buildings of all sorts, allowing Soviet infantry to lob attacks into Allied bases from afar outside retaliation range; or, indirectly fire over base walls or from behind cover. Unfortunately, its warhead's effectiveness does not gain any boosts when used to attack the inside of an enemy structure. It does, however, provide an inexpensive way to overcome Allied Pillbox defenses as it can either outrange their heavy machine guns, or arc a projectile over from behind cover. 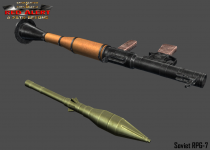 An RPG-7 has been issued in bulk to Soviet infantry forces, and features a long-range timed warhead and a shorter-range untimed warhead. Original model by r34ch, texture by TheBeerinator. 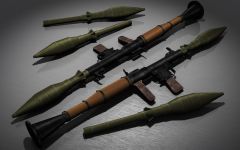 I personally I like it when the Projectile arcs Be it bullets rockets or tank shells, as in real life , in my opinion its much better than Point and shoot , gives out a little challenge .

Once the this baby is released ,you can bet your shorts I'll be spamming away with this weapon.

POWER TO THE MODDERS !

Yeah! I like the RPG-7 too. And now. the soviets will got a good anti-tank weapon (nobody use the grenadiers vs tanks).

also I find Grenadiers ineffective against Tanks -_-
Now we the Soviets! have a replant to an early Light Tank/Jeep Rush ! WE also have an opportunity to Counter the Allied Base Spam !

They're gonna improve the grenadier in matters of firepower and speed, so as to make them more than a match against the lighter allied vehicles. For everything else, there's the RPG.

Grenadiers will be able to hold their own against infantry and are light and nimble, but have crappy accuracy (even against buildings) at the end of their range. The grenade alt-fire throws it really hard, but it does not go where you want :)

RPGs, on the other hand, go really far but you cannot sprint along the way Grenadiers do. An RPG soldier will probably be staying back behind his comrades during an attack, whereas a Grenadier can be chasing people down or hastily moving between cover.