Sonic World Doom, a mod for Doom, will feature as we already know, a hub level. This news will explain how it works. Also, a new boss has appeared... Metal Sonic himself! And a few more news is also included.

Today I will present you a few things.

First, and maybe the most important for the Sonic fans, Metal Sonic will be included in the mod.

You will fight him in Stardust Speedway Zone Act 3 (Bad Future), just like the original game. And even if it's Doom, you will have to race him to win. But of course, Eggman won't let you win this, and you'll be annoyed by him.

Since the mod uses a hub level, you will have a button to reset the level in case you fail the race.

A video of the race :

I've already explained a bit what is the hub level before. Now, I am able to specify a few things.

Also, the Red Star Rings that you can collect. They will unlock some bonus levels in the Hub Level. So, be sure to collect them all! 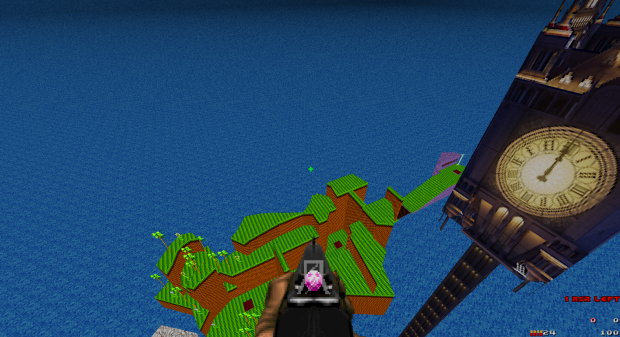 Now it's time to specify how some levels will work. Since you are in the Sonic World, but with the Doom Guy, the levels you will play will include their mechanics, sometimes with a twist. Also, a lot of the Sonic 2D levels will be included so your experience will be varied.

Just like in Sonic 3 & Knuckles, you will need to turn the light on. Otherwise, new monsters or dead monsters will spawn indefinitely.

Some parts of the level will make you extremely tiny, against giant monsters... Same with the layout of course.

Working on the barrel of doom... Maybe ?

You can suggest some if you want.

Reminder : you can play the first beta of the mod here :

That's all for now !