Post news RSS Something old, something new and a Frozen Synapse update...

We bounce back with a bit of a development update and a penetrating look deep into the complex heart of Mode 7 Games...

Important things first: we have recently released an update. Here is the breakdown for those of you that are not yet aware of this...

Lead Designer Ian worked incredibly hard on this a couple of weeks ago, mostly because he got married on Saturday and is now off on honeymoon until August! Many congrats to him and his lovely wife Lizzie.

The response so far has been very good - my favourite comment has been "the game get so much better every time you guys update it". Cheers for the support - we are trying to push things forwards as much as we can.

Bit-Tech Bloggings
I have recently started a blog for Bit-Tech. You can read it here - the latest edition should be out later this week. I was digging around to find some screenshots of our first prototype, and I found this, which amused me: 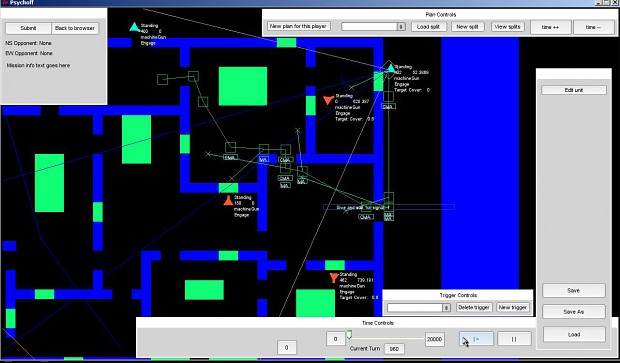 The game really has come a long way!

Podcast
The latest episode of our podcast Visiting the Village is up. Check it out:


Other Stuff
There still isn't a video of us hijacking the World of Love conference! I'm told one is on the way.

We didn't get chosen for the PAX10 - this was extremely disappointing and there's not much more to say beyond that. We weren't given any feedback about it. Good luck to everyone who did make it!

We've submitted the game to both Indiecade and The Indie Games Arcade (which are different things), so hopefully you will be seeing it around the place if you attend various things that are coming up later in the year.

I recently attended Develop in Brighton. It was very interesting as usual: I think the best thing about it was catching up with people I haven't seen for a while. This Mark Rein vs. Cliffski thing happened while I was there - it was an interesting collision of worlds. Cliff was pretty angry about it afterwards!

Among the most interesting speakers were Jagex who make Runescape: those guys really know about taking care of their customers. They put their games and customers first, yet are incredibly successful - we hope to follow their example even though we make totally different kinds of games to them!

There is a lot to do at the moment - I'm hoping to get a new trailer out soon to boost sales of the pre-order, which is going ok but we could definitely use a lift! I also need to work on some new music, and as soon as Ian is back we will be starting a big, hard crunch on the UI to get that sorted out once and for all.

Great update/s. I feel like you're starting to get everything ironed out.
New music, go (;

It is nice to be making progress. The update at the end of August should be a really big deal. Also, music: yes sir!

Good update. Thanks for the heads up on the things thrown in. Congrats to Ian! Being married rocks. Mark Rein does sound like a jerk. I think everything I've ever heard about him was jerkish.

Cheers - it's nice to have some progress to show. This is the best summation of the Mark Rein thing - there's more to it than meets the eye - Rockpapershotgun.com. A fairly interesting clash of indie and mainstream, I think.

Have you fixed the bug known as "everything to do with the random greyed-out civilians that either do nothing or don't exist?"

What's up with the ghosts, then? Are they not working properly for you?