Hello everyone. I'm the project leader of Red Requiem: Liberation from LHYB STUDIO. Here are some informations & progress report. First of all, I want to start off with an apology.

Sorry, everyone. We delayed RED's DEMO for such a long time. As a matter of fact we planned to release a DEMO in Oct 15th, but delayed because of a great deal of problems. I will explain\complain later.

Now I am going to tell you our progress and the difficulties we're actually facing. But please be patient-No matter what happens, we will bring you RED, the entire, full, satisfying RED.

For those who do not know us well, what's RED?

Red Requiem: Liberation - RED - is a standalone mod for HL2: EP2, which means nothing is required to play RED, for example, Half-Life 2, Half-Life 2 Episode Two or Source SDK Base is not required too.

And we adapted Source 2007 instead of the latest Source 2013. Also we don't want to make money AT ALL so RED itself and its DLCs and expansion packs are totally FREE. What we want is to tell a good story.

About the Background story can be found in RED's main moddb page and here: 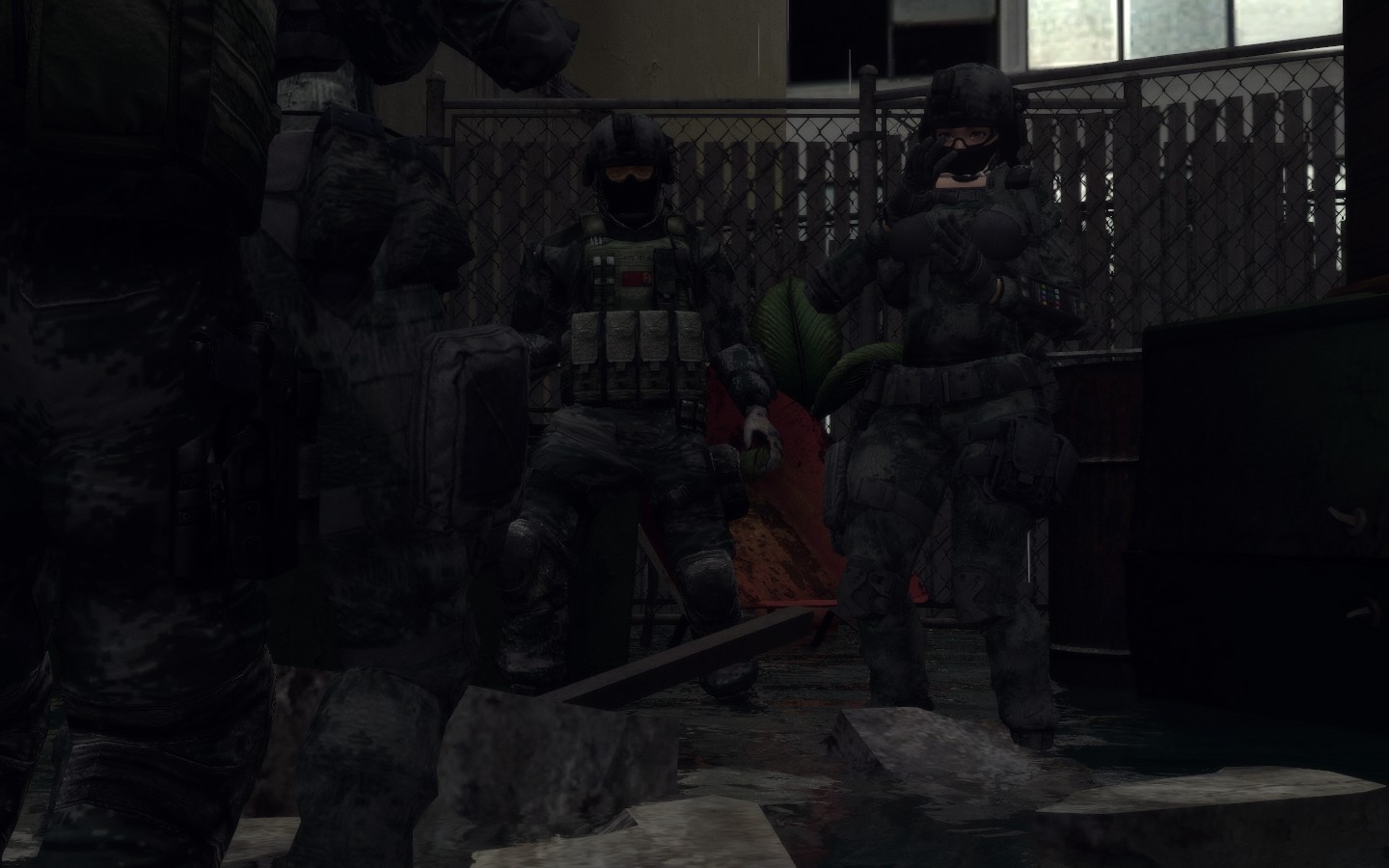 Your decisions DO MATTER. It changes how the story goes. In this cutscene you can decide to kill the female PLA you're holding or shoot Sarah. Your decisions impact the way your friends\enemies think of you and how they interact with you.

You will play as a GIGN elite called Victor, who will prove his value and find his side in the world that is in chaos. RED has multi-line story which means you can make your own decision that change how the story goes. Yes, YOUR DECISIONS MATTER. Also, we plan to make many DLCs to tell the original story in other characters' POV. 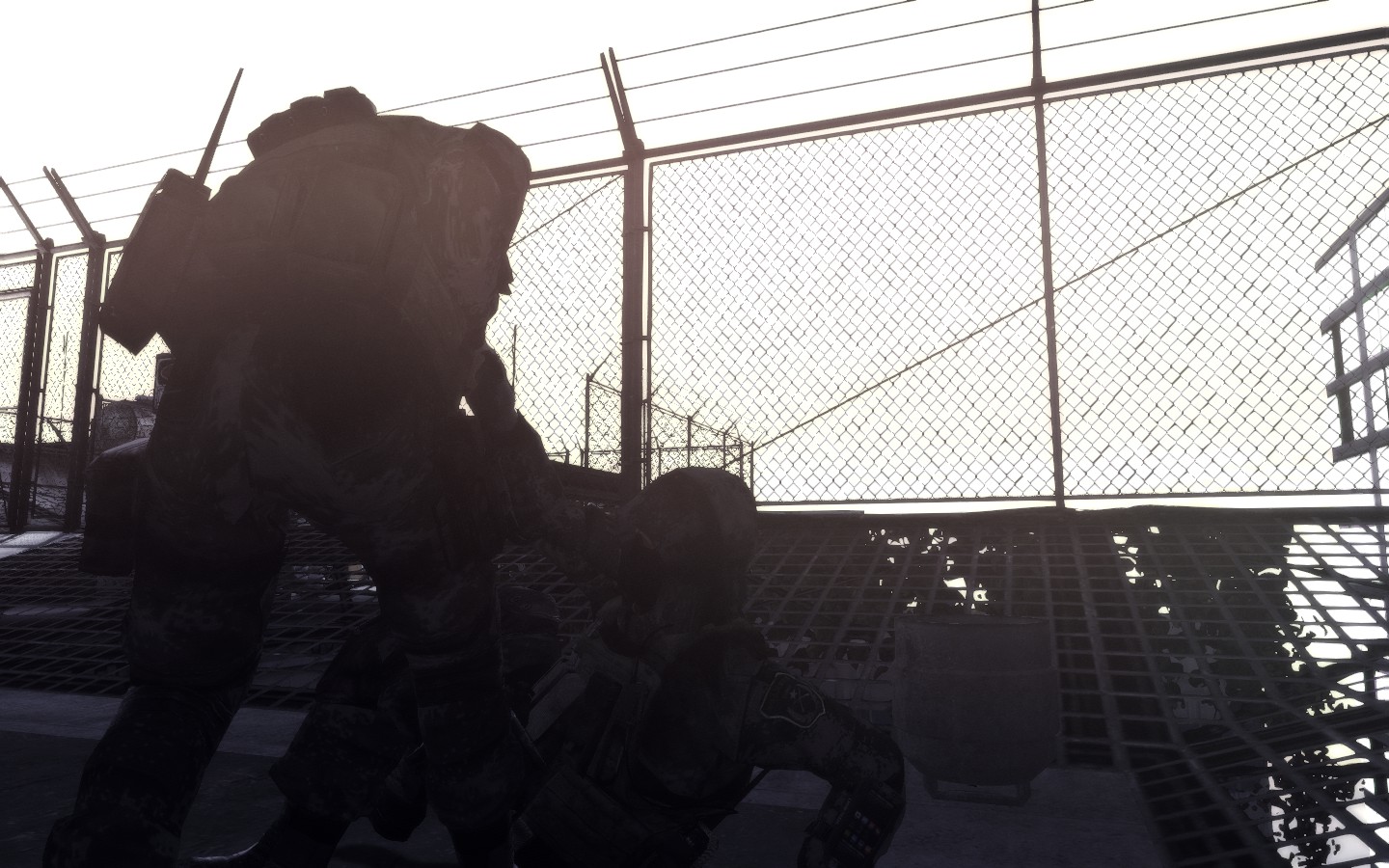 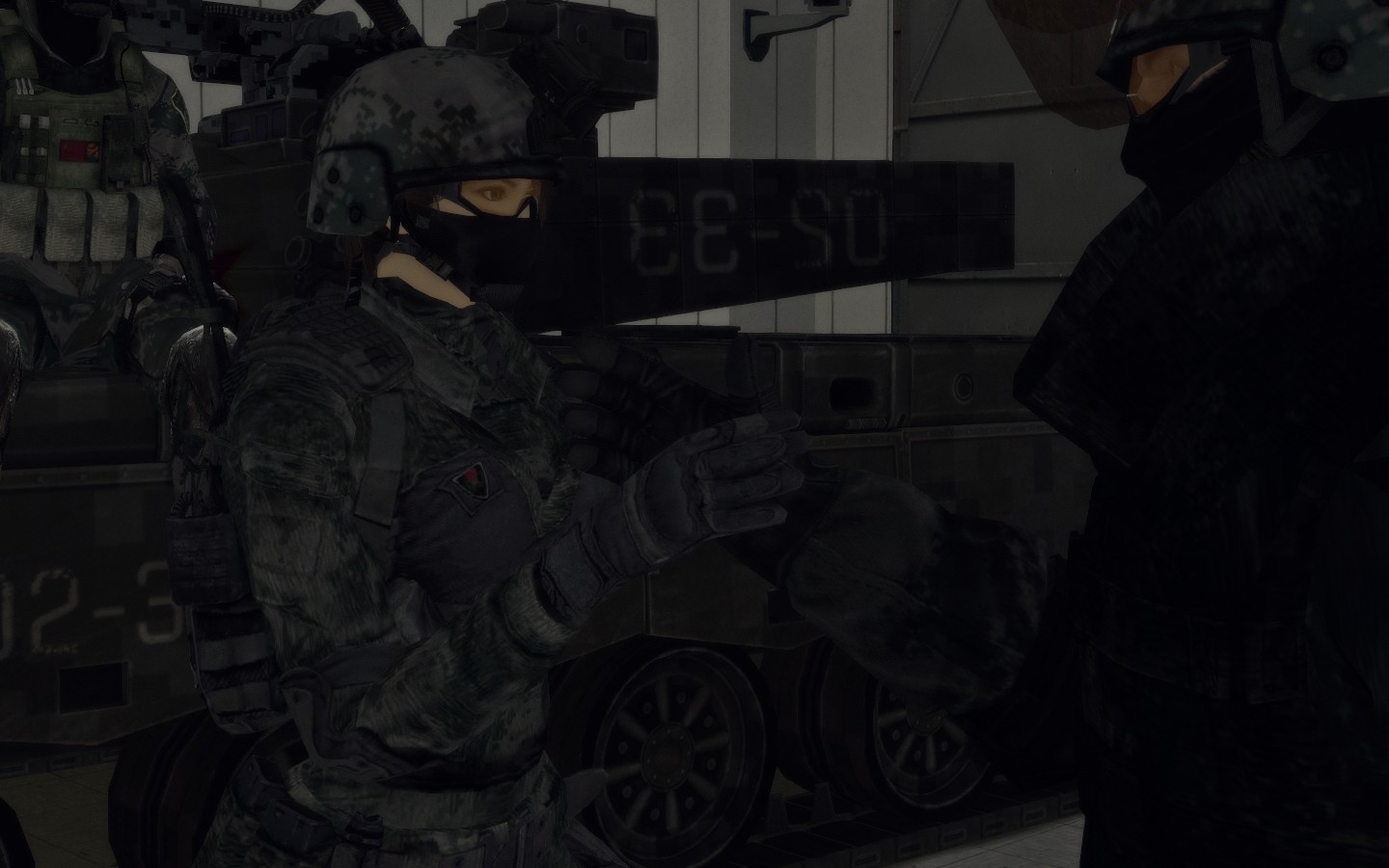 Telling the stories of many individuals is the most vital and challenging. Also, the most exciting thing.

What's more, we prepared some challenge modes, such as Survival and Zombie Survival, and the Zombie Survival even has its own storyline. We're going to create a MP- which is originally for making trailers,then transformed into a fully playable version.However we don't want to release it this early.

(However we're told that Survivals are really overused. We're actually thinking of abandoning them..)

Well, the most annoying thing is that you can see that there's only one more step to success and we're just having a hard time making that step.

To the most important part, well, we're going to talk about the difficulties we're facing. 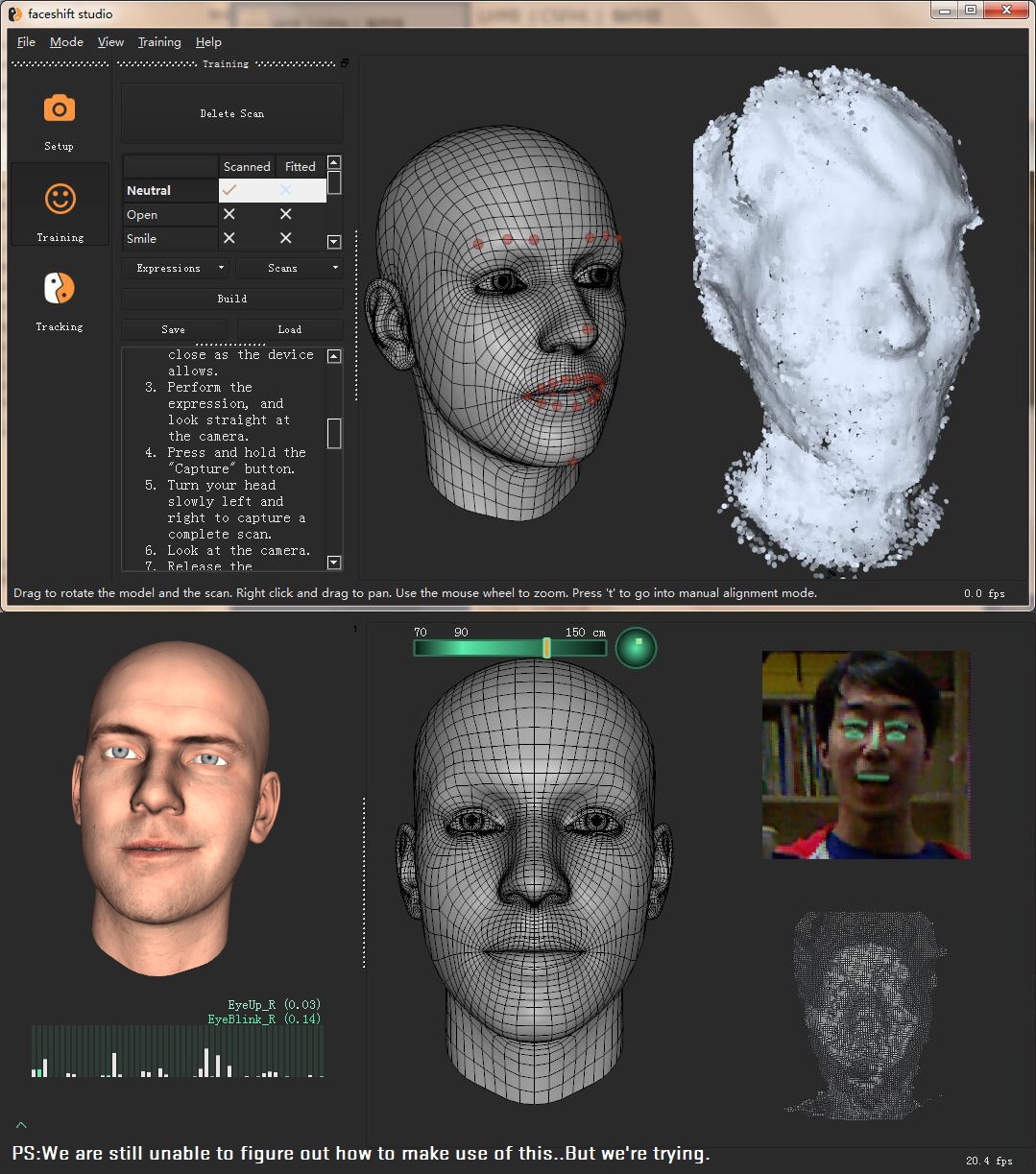 Our attempt to use Facial Expression Capture.However we can't really figure out a proper way to use it.

However these are all because of our weakness. We're unable to tell an impressive story by simply using the default NPC animations and extremely lack of animators,so we decided to do Motion Capture; We don't know how to make NPCs talk in HL2 way, that's why we use Facial Expression Capture instead of the original system- the advanced enough one used in almost every Source Engine games.

And what's worst, we're still in urgent need of Programmars and Mappers. We used to have some talented programmars. However, they had to leave with various reasons. Many good ideas became almost impossible to achieve. For example, the all-new MAIN MENU, and HUD, are still W.I.P without big progress. 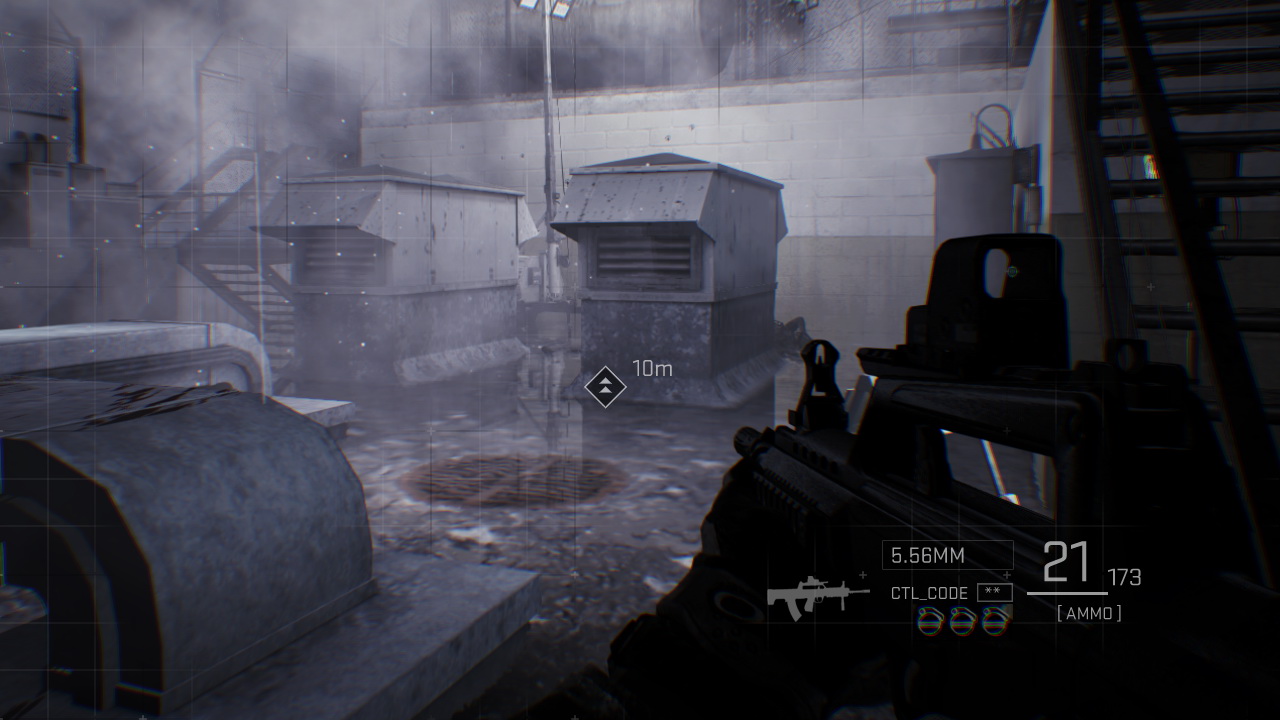 One possible HUD. We almost did it, but it's still far from being finished.

We're just a group of high school students- Now some of us are in university- which means we have no more time finding solutions to fix the difficulties we're facing. One year ago two studios - one from UK, one from China, stole our Screenshots to raise money. We had to clarify - and promise that LHYB STUDIO will never take a single cent from our followers or watchers. That's why we're from all over the world but still try to gather money from inside of our studio instead of raising money from public - to buy Kinects. WE DON'T AND WON'T TAKE A CENT, that's our promise.

We can solve the difficulties by ourselves, though it takes long. However, if you're willing to join us, to help, to fight together, we can bring our followers a perfect enough RED - not just a DEMO - as soon as we can.

If you wanna contribute your creativity or power - don't hesitate. We need you.

Just contact us if you're willing to help. We NEED YOU.

NEW MAIL HAS BEEN UPDATED.

All kinds of people are welcomed here!

We welcome every sorts of email

- However we received an email with very, very aggressive language this week.

That does hurt us deeply. I can understand the struggle of being kept waiting, but please be patient, and be nice.
If we receive more advises and encouragement instead of anger, we will appreciate it. Because that means our self-willing job is worthwhile.

In the end, as for the MOTY 2016 - Well, we failed one year ago, very saddening. This time I dare not to expect too much, not expecting to win. I just want to make RED better and not letting you guys down. But if you're willing to vote for us, it will be appreciated.

Thank you for listening.

Thanks for your continued support!

I don't know why you are apologizing. By reading the post I can tell that what happened is nobody's fault. Things like that happen in the development of video games, I know it because I have also worked on several projects. Even now I'm having problems with some team members. So yeah, I can totally understand you. I wish you good luck, and don't worry about release dates. We'll wait whatever it takes because I'm sure it will be worth it.

In our Country,time is pretty important to most of people,so we truly felt sorry for the delay of releasing.We all found some different or same problems in the development.How to solve the difficulties is much more significant.

Best wishes for you and your guys. :D

Glad to hear this is still on track! Is Silent Cry still going to be a part of the full RED experience?

Question will this be on Steam as a free to play mod of course? or Could you go indie with it? you will have more benefits but it does cost.

Well,actually we had paid 100USD for Greenlight.We just do not want to release due to our slow progress :3

Take your time folk, no need to rush it.
Better safe than sorry.

If only all of the people tracking this mod are as reasonable as you are.

I've been following this project for a awhile, and I don't think I've seen any team more dedicated to their work than this one has been to RED; I have no doubt you guys will release one hell of a project, no matter how long it takes. About the emails, don't let a few bad apples spoil the bunch, there are way more people who care about the project than those ********. You've done great so far, keep it up! Black Mesa took nine years to complete, and if that's how long it takes, so be it, I'll be around to see the release!

This looks so promising, I can't wait. That said, I wouldn't be too worried about delays, that really just means a better product will be released in the end, right?

Problems isn't an unusual thing, problem is like the world's variations. This is a cool mod i've never seen before. keep up your job and make it better and better. i hope it will be release as soon as possible. if i can, i will be the first one who download it when released.