Yes, you are reading that title correctly. Delta 6 is now known as Version 1.0 to represent how far it has come from earlier releases. Details and Screenshots within!

We have lots of news to give in this update!

First, it has been decided that Delta 6 will now be known as Version 1.0 for a number of reasons. Since Delta 6 has such massive changes and has taken so long to develop, calling it Delta 6 increasingly felt like it grossly understated the amount of work that has gone into this new version. Another reason was that many user-created weapons, maps and especially scripts made for Delta 5.56 will not be fully compatible with the new version. We still intend to greatly support our modding community, and it is planned to include modding documentation within the release to help modders make high quality content easier.

Below are several screenshots of new maps along with a few old favorites from Delta 5.56. Even though the need to have Half-Life 2: Deathmatch was removed as a requirement for Version 1.0, we are able to include several community-made DM maps that do not need textures or models from the HL2:DM files. Including DM_Motel from older versions of Tactical and newcomer DM_Gasworks. 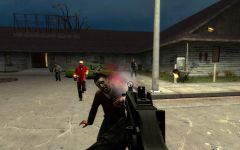 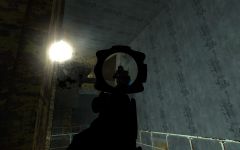 Also below are community-made maps CS_Meridian, CS_Pariah and DE_NVBase_B4. All of which are new maps in Version 1.0 of SMOD: Tactical. Our images section has even more new screenshots to look at. Also featured is the new community-made USP Tactical weapon, which has a sound suppressor for stealth missions. 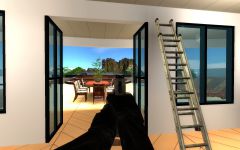 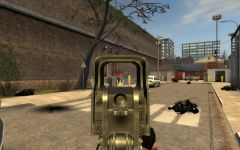 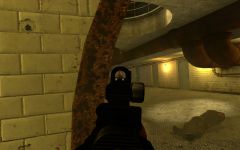 Sorry, no gameplay video for this update.

For those wanting to know exactly what has been changed in the new version, here's some choice lines lifted from the changelog:

WEAPONS
-Crowbar, Suit Pick-Up Hands and Gravity Gun now have proper CSS Hands (thanks to modderfreak).
-Added proper, working World Models for all weapons. Fixed a number of issues with those that were in before.
-Fixed a number of issues with dead frames in animations. Changed animation speeds on weapons to better balance them.
-Raised AI's ability to hear gunshot sounds from SMOD Tactical's weapons.
-Edited Shotgun reload animations to not obstruct the player's view as much.
-Precached 3D Scoped weapons, greatly reducing crashes with them.
-Removed shrapnal from grenades due to unreliable beheavior and crash issues. Increased damage and radius to compensate.

MAPS
-Made new maps selectable through the chapter menu.
-Removed several ill-fitting SMOD 40 events from the HL2 campaign (prison mine puzzle, coast_04 puzzle, no antlion assistance in prison map, plot-stopping explo_justaway in trainstation_05).
-Raised Alyx's health in the prison and city maps.
-9mm, 5.7 and 5.56 ammo now uses the best fitting ammo types already present in the HL2 campaign for better compatibility (models reskinned/replaced where appropriate).
-Gave player batteries in the instant-actions maps so players can use the flashlight/night vision in them.

Of course, those are far from the only changes done. The full changelog will be released with Version 1.0. Which is on-track for release this summer.

Really nice oneman! I hope you remember me, the stupid newbie that in 2 years was "roaming" on your forum saying ******** and asking for trash.
Nice to see that this mod got updated, and I hope to see it released in not so many time!

Lookin' forward to this.

Awesome!!!
(The shrapnel of grenade is a good idea,too bad...)

Great job on the release.

I like the idea of saying delta 6 is version 1.0 it makes it like a fresh new start!

*CONGRATULATIONS!*
You just earned a Ph.D in Badasserie!

Hey, do you think you guys could somehow make a deal with David Foster so you can include the levels from Metastasis in this? I absolutely love that mod, but it gets so boring with the HL2 weapons. Playing them in SMOD Tactical would be absolutely amazing. But if that kind of thing is highly unlikely or impossible, that's okay too.

We have no plans to include any maps from the "MINERVA" series in SMOD: Tactical due to compatibility issues as well as possible gameplay issues. The maps were updated to use the Episode 1 engine, while SMOD still uses Half-Life 2's original engine as a base.

If you download the SMOD 'Episode 1 update' on the Tactical forums you can run the MINERVA maps just fine. I've been attempting to make mapadds for them using a modified Delta 5.56, so it definitely works.

Excuse me,where can I find the SMOD 'Episode 1 update'?

Finally no need for that lame config map. :)

Is there a way to turn OFF the "only one weapon in each slot" thing? (Just asking. I'm not going to do it.) I'd just like to use it when I am just playing around with the cheats with my free time when I finish the tactical game.

Yeah, "weapon_limitcategory 0" is the command you're looking for. "exec neo", "exec hardboiled" and "exec all_tactical" have the same effect too.

Great mod, just a few suggestions that I hope will be helpful.
1. Zoom in a little when you scope/iron sight.
2. Decrease the flash effect when you turn on bullet time.
3. Decrease the brightness of the night vision. Right now, it's useless because everything is just white.

Aye, went and tweaked most of that eons ago. If you're interested, it's thankfully pretty pain-free.

1. A few of them already do this, mostly the rifles. If you wanna add or tweak the zoom on a weapon, you can mess with each one's script ( Smod.wikidot.com ).

Those scripts are in smodtactical556/scripts/ and are named weapon_custom[xx].txt. The zoom's controlled by the "fov" line in the IronSight section. If it doesn't have a line, just add one in that section. For reference, the HL2 crossbow scope's fov mod is -21, if I remember right.

2. I don't think there's a way to tone it down, just get rid of it altogether. That command is "bullettimesim_disable_flash 0".

Will the mod be released this month? May? Or June? Where are you aiming to release this? This is probly the bestest realistic game yet!

maybe june because he said its going to release in summer.
well if hes american

Personal suggestions:
(note: most of these revolve around the HL2 campaign, mostly around the gunships/RPG7 in particular. This does assume though you'll keep the Blackhawk and Harrier models for the Hunterchopper & Gunships respectively.)

- I often run into the problem with gunships: Usually I prefer to equip some other weapons other than the RPG (for example, the AWP), and when I come to a place that requires you to fight a gunship (IE lighthouse point) there is never an RPG in sight. This either forces you to carry an RPG7 around constantly forgoing all other weapons in that slot like the AWP, or use the console to spawn one whenever you fight gunships. Both of these are very hindering and immersion breaking.
My suggestion: Since you can't go on without killing the gunship in most cases, Put an RPG7 wherever there is an unavoidable gunship battle.

- The gunships/helicopters should go down with one or two RPG Hits (three on hard). They're aircraft, not flying battletanks. They should not be able to soak up so much RPG damage. In the normal Half Life 2 campaign this was acceptable since they were Combine Synths that probably had more advanced armor than modern aircraft do. But in SMOD Tactical, they aren't synths they're just modern aircraft, so they should reflect this in more than just skin. Also make them at least damageable by other weapons. Unlike with RPGs this should take quite a long time, but yeah.

-Also the RPG7 rockets should fly much faster. Since this is a mod based around realism, the rockets too should reflect this. Realisticly its impossible for one to "dodge" a rocket (unless your Neo from the matrix or something.) Gamewise this should be very difficult to say the least. Rockets simply do not fly at a measly 38m a second.

- All of this pretty much makes the whole process of killing gunships all too easy right? well.... yes. So to Negatate this out I have another suggstion: get rid of the green rocket resupply (you know what I mean right? the ones which give you infinite supply of rockets) and instead just a regular crate with some rockets in & around it. That way you'll have to conserve your rockets during these fights, and if you run out: tough luck, you'll have to shoot it down with your gun. The exception should of course be the strider battles.

- Also perhaps you should just get rid of the default HL2 RPG and replace it with the RPG7 entirely. You've done so for pretty much all the other weapons, so why not the RPG? Its not like the NPCs would be any worse off, they don't guide the default RPG rockets anyway.

- I noticed the SVD is still in Coast_12, and the banana right at the end of start canal, and I can only assume the stuff launcher at the end of red letter day (I didn't check, was too busy trying to not get killed) and I'm sure others too. Any plans on replacing/removing those?

- Also will there be a way to go back to the COD health system? Cause I've grown rather attached to it. Not that I won't give the bandage system a try.

Other than that, excellent mod

im Lookin' forward to this

god, i am so happy you are working on this again!

Hey. Hello? are you alive ?