Crafting, Farming, state of development, progress on other features, first devlog of many to come.

Good day old and new Keepers! I would love to keep everyone in the loop, so as much as possible, I will be trying to post every Friday a devlog of what was going on during the last part of the week!

Displays act similar to how they acted in SK Original, You place them around your shop so that you can place around your wares for customers to check out and buy! Changes are minor - we are moving away from "States" and have introduced a context Hotbar for the players, the first 3 are action slots which we will talk about at a later date, but the rest are item slots. For placing a Display you will need to get your hands on a display item in any way, be that quest reward, order scroll, npc vendor, loot drop, crafting, etc..etc... Drag that item into one of your hotbar slots and select it, rotate it, place it. Using your hammer you can fix it or remove it altogether! A week ago we showed a video asking you the community which Display management system would work best. And we decided to stick to Type 1 and Type 3 both within the game. The choice will be fully yours as the players, but we will be modifying how Type 1 works and feels tho, so it's easier to control and get used to, as well as adding some quality of life additions to Type 3, for example a Fill button so you can auto fill a display with a selected item with 1 click.

Displays do have durability which is manipulated during any action that the display suffers (Item placed on it, item removed from it, customer bought an item, display was hit by weapons) This will be shown visually via texture change, and once a certain threshold is reached, the Display will start braking down gradually until it becomes a trash pile that you will have to clean up. 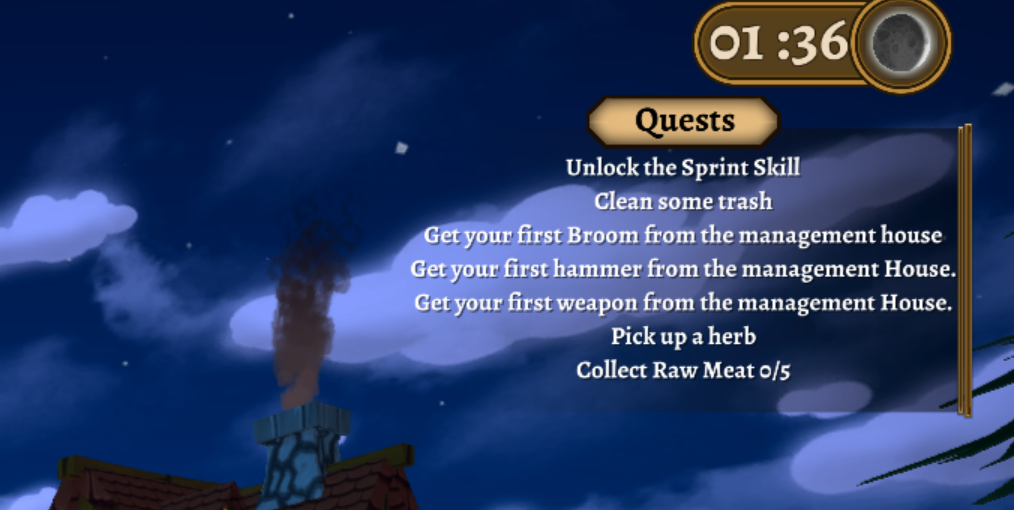 SK Original, had "Quests" they were sell X amount of Y, for a gold or statue reward. SK 2 Quests are a bit more fleshed out. Gained via actions in the game, or from unique NPC's around the world. Quests reward range from Mun's to rare items, unique order scroll additions, world actions and so on. So we have added a sort of Quest UI, to help you track them and what has to be done. At the moment once a quest is complete, you will get a notification straight away without the need to turn it in!

One of the things that will be very different from SK 1 development is that we have concept artists, as such a lot of concepts will pop up for you guys to see what we are thinking about having in game. As an example we are working on a revamped crafting system, and each crafting type will require a unique NPC with his own house. Here are a concept of the Alchemy crafting houses we have. Hope you love them and can offer your own suggestions! 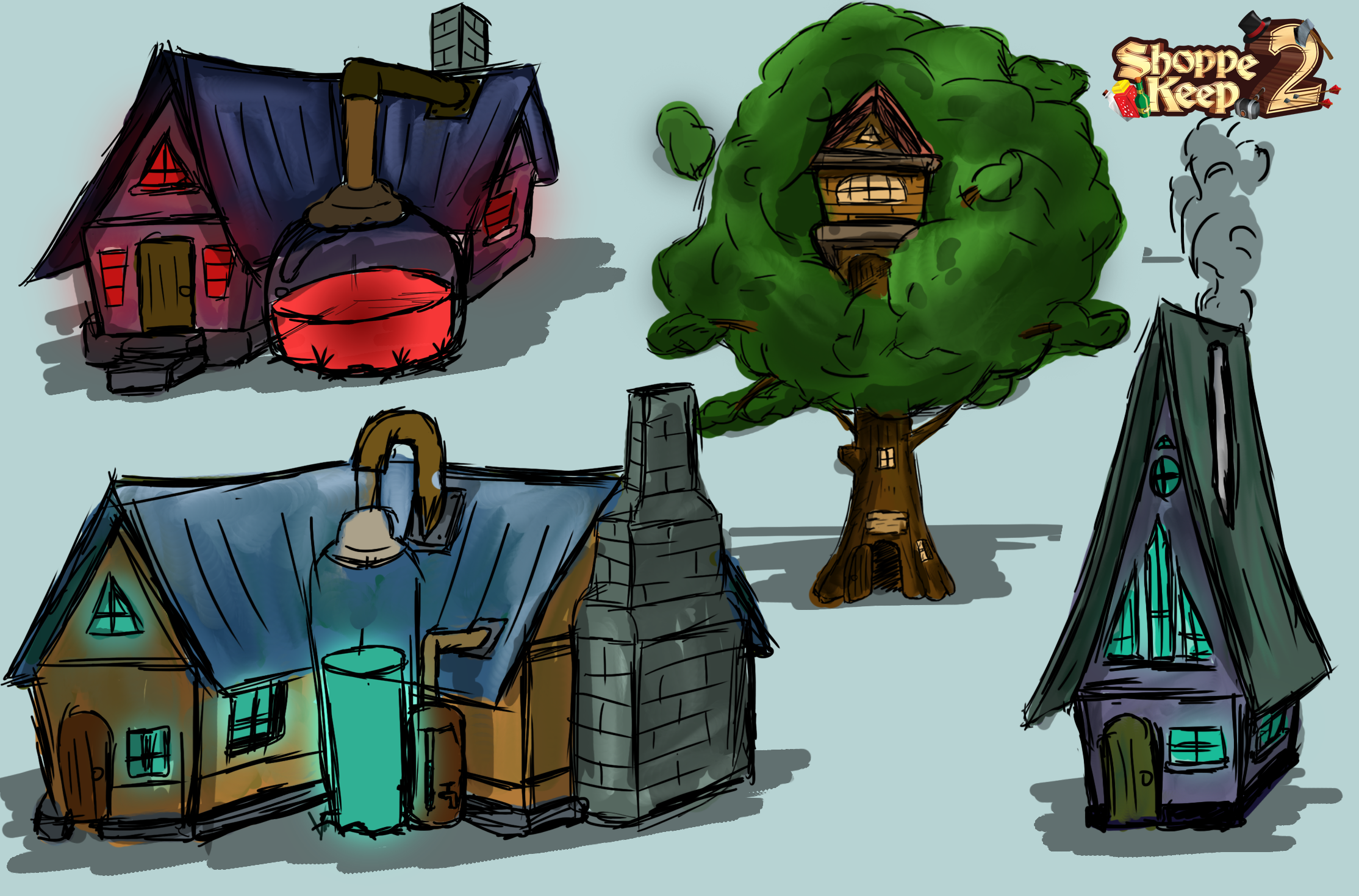 Shoppe Keep 2 is on Steam right now (Not live for the public - duuuh) But I am shown as "Playing SK2" on my profile a lot lately, this is because every thing needs debugging and stress testing. The Steam implementation at the moment is minor, which means that the builds are on their servers, the game recognizes your Steam account, name, avatar, does some matchmaking magic (More on Steam Multiplayer next week as we get more dev accounts on it). Next steps will be sorting out statistics sending and receiving via Steam, the game itself is build so the workshop should not be hard to implement and the community should be able to add their own items into the game! Trading cards and achievements will be done without question! Come visit us on Steam here, and post into the forums!

We will allow each player to have up to 3 world saves, a world save contains information about the date, shop status, display locations, items for sale, status of the town and world quests that have been already complete on said World. Why have 3, is maybe 1 is your and your friends world that you play together in, another is your own personal one that you play alone, etc etc.

SK 1 had a farming feature, be it a small one, but it can be called one. You planted seeds into farm plots and they grew into Weed, Schrooms etc. SK 2 elaborates on this a bit - First change is that you no longer use seeds, you use the plant itself that you want to "duplicate", items that can be planted will tell you so (In the future we will have an icon representing that) 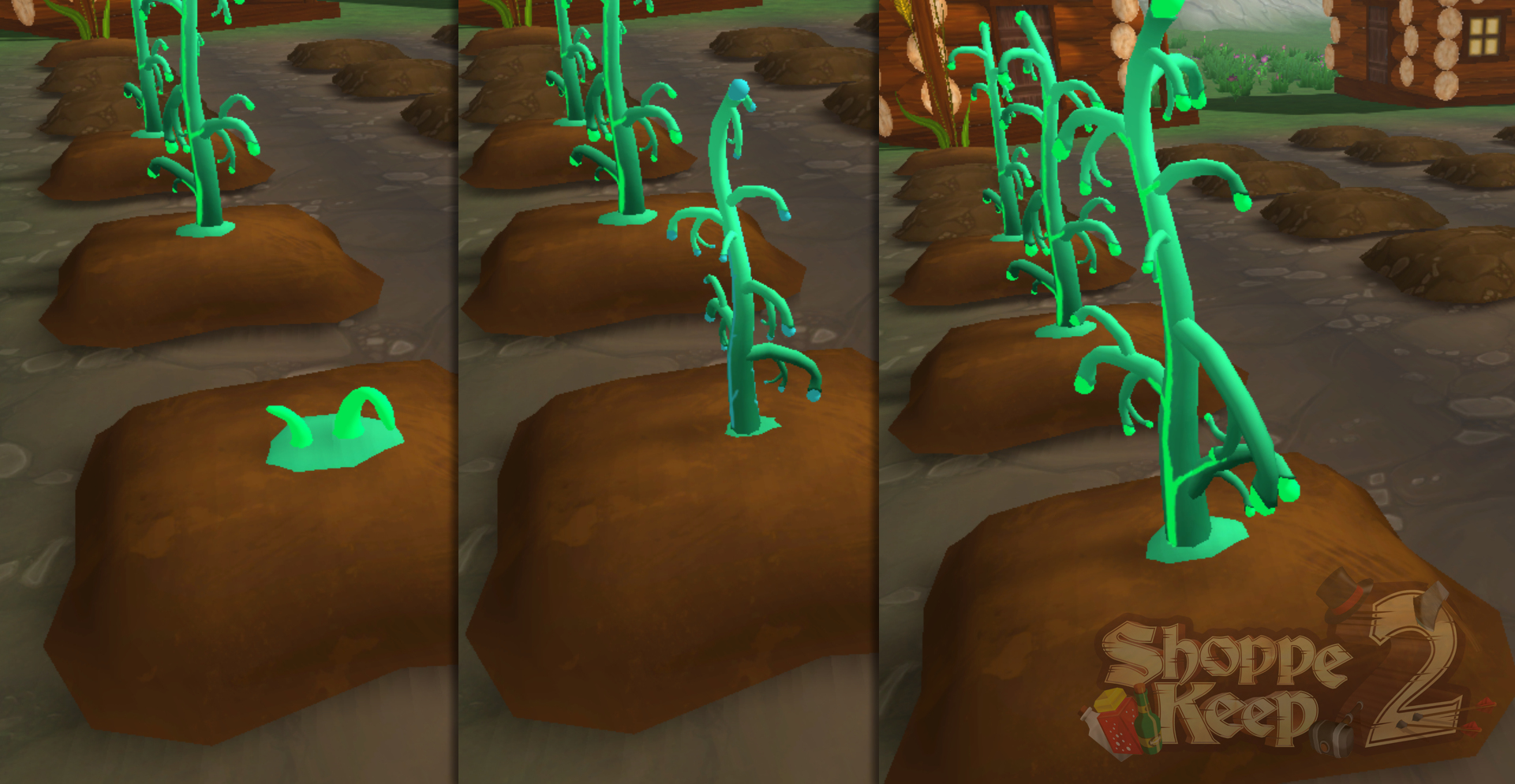 Each plant will have their own time frame when they are fully grown, and will yield a 1-2 return of said plant when harvested. Unlocks, upgrades and skills will raise the yield! So you can easily have a character specialised in farming for your friend team of Keepers. Before you start growing, a small thing needs to be done is having the soil ready, just needs a click, we are still debating if we should require you to have a certain item for that or not.

SK 1 had an Alchemy cauldron which required you to drop in items in a unique exact sequence to get a result, and was a bit tiresome, then we patched it up by making you figure out a recipe once, and that unlocked an auto craft button for that recipe, so we took that idea and went with it. You no longer need to experiment with items, instead you will meet Crafter npc's like this Cook here.

If an NPC you interact with is able to craft something - it will be shown on his UI Panel, pressing that opens the crafting panel.

This window has a list of craft able recipes that you currently own or have unlocked via various means, pressing on it, reveals some information - a resulting item, how long will it take and what are the Mun + item requirements for it. You are able to decided how many you want to be crafted or just press a Fill button and auto craft the maximum amount you can. This will initiate a Task which will fill up over time. Once thats done, just return to the crafter and take your items! We are looking into adding Blacksmithing and Alchemy crafters into the game, and maybe others if we find them necessary and a good addition to the game itself and it's world.

This is it for the time being! We are having a blast developing SK 2, and love the feedback that we are getting from the community and at our short EGX stay this year.

As always - Stay tuned, see you guys next week, and in the discussions!