It's been a while, but we're back and stronger than ever. Check out the Raptor, which we've remodeled, and Tao's bigger, badder, and even more generous Nuke Cannon. All this now, with more soon to come...

The wait is almost over, and to ease the time in between we are taking the wraps off of two new model improvements you can expect to see in the forthcoming release. So without further ado we present to you the new F-22 Raptor which will be replacing the EA model used by the base USA faction, Laser and Superweapon Generals. 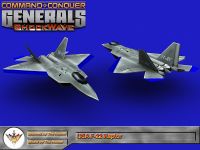 The new Raptor model boasts many refinements that bring it closer to its real life counterpart, such as a larger cockpit area and undulating sections of the body. Statswise we have decreased the build time on the Raptor to address redundancy and make it a more viable option in online games so we expect you will be seeing a lot more of them in the future.

Next up we have the new Nuke Cannon model, exclusive to General Tao. 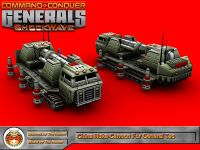 This new model packs a much larger variant of the original cannon and features several nuances in the cabin area and rear sections. Most notable is that the General's version uses two extra supporting weights to hold the vehicle in place before it fires. The additional weights further reduce shake and ensure the Nuke Cannon can deliver its payload with even deadlier accuracy, and an even larger blast.

We think this quote is apt.

So that's it for this update, folks - we hope you liked it. We can assure the wait for 0.96 will be worth it so stay tuned as we have more news and updates for you right around the corner.

AWESOME!
Can't wait to the next release. ;D

Yes. It´s great mod! And new updates look amasing!
So when we get a newest version??
Give us some date(circa) pls. Cant wait.
THX

The F-22 is more appropriate because it is far superior in air-to-air combat, but the primary reason is that it is a vanilla Generals unit and has thus been kept to ensure that ShockWave feels like the expansion modification that it is and not a conversion.

hey...can you tell me what is the meaning expansion and conversion mod???

An expansion builds on the current game, like adding new content for the in game character to play or new maps, or new generals!
Whereas a conversion takes the original principal or engine of the game, and creates an entirely new game! like Medieval II:Third age, that uses the medieval engine, but has none of the original content in!
Though you can tell thi is an expansion cause it's still got the generals and things, but far far more Awesomeofied!! :P
(Correct me if I'm wrong ;) )

You are correct. An expansion expands on the game and brings the original style and content up-to-date. SW would be an expansion. RotR on the other hand, would be a partial expansion. It's still a C&C General's game, but it's got it's own art and gameplay style mixed in.

Something like Cold War Crisis would be a total conversion, the game uses only the SAGE engine, and some minor bits of the content included in the game, while the rest of the game is composed of original content and incorporates it's own art style and gameplay characteristics.

Another example of how SWR is cleaning up EA's mess

release it when its ready to be released

how do we get these updates??
PLZ ANSWER

is there a realese date?

How sad btw.. I check this site nearly daily for new updates:P