This is the September news update from the Iron Europe dev team.

Posted by cheesemcboots on Sep 3rd, 2009

Hello everyone. It is time again for another Iron Europe progress report. We are all still working hard getting the bulk of the content for the mod fleshed out. As always, our research department has provided us with some terrific readings about WW1. First up, we would like to show you a map description for the first battle of Ypres, in Gheluvelt, Belgium. This will be one of the first maps we release and promises for some interesting firefights.

The time is 14:00, 31 October, 1914. The second stage of the Battle of Ypres has already begun. Eight days have passed since the fighting at Langemarck. The Imperial German forces have continued to assault the British lines each day in their attempt to achieve a breakthrough at Ypres.

These have been days of intense combat: the German infantry begin their assaults as early as 5:00a.m; the fighting lasts until about 6:00pm when both sides are exhausted, but on some days evening attacks are ordered, and the fighting does not end until 2:00am. The Germans possess superior numbers of men, which allows some of their troops to go in reserve and rotate, which maintains a level of freshness to them.

The Imperial German Army has now shifted the focus of its assault from the northern Bixschoote-Langemarck-Zonnebeke sector of the Ypres Salient to the eastern central Gheluvelt sector and the Messines Ridge in the southern sector.

This is a powerful force: five Divisions of experienced soldiers and one Division of wildly enthusiastic Bavarian students and other Bavarian Freiwillige volunteers. Army Group Fabeck commenced its assault on the Gheluvelt-Messines sector of the Ypres Salient two days ago on October 29; the Kaiser himself has visited the frontlines to encourage you to victory.

An Order of the Day was issued on 30 October, 1914. The breakthrough will be of decisive importance. We must and therefore will conquer, settle forever with the centuries-long struggle, end the war, and strike the decisive blow against our most detested enemy.

The blow has been struck. Finally, this morning, between 11:30am and noon, after thousands of heavy German casualties sustained since the Battle of Ypres commenced on October 19th, the British line has broken in front of the village of Gheluvelt, located about four miles east of Ypres on the Menin Road.

The English have abandoned their trenches and are in retreat towards Ypres. Several companies of the 245 Reserve Regiment and the 16th Bavarian (List) Reserve Regiment have taken the church in the eastern section of the village and the grounds of Gheluvelt Chateau.

You now have captured the majority of the village, except the Chateau itself and the other buildings on its estate. If you can capture the Chateau and the other estate buildings and hold these positions, Gheluvelt will be completely in German control, and with Ypres being only four miles away, reinforcements can be moved up and the final advance on Ypres will begin.

But the young men are in a celebratory mood now that the British have been defeated. The Chateau Grounds have taken on a festive atmosphere; everyone is laughing and joking, shaking hands, and slapping each other on the back. Some of the volunteers are drinking from wine bottles captured from the Chateau.

You hear your artillery to the east fire a fierce barrage of shells; everyone ignores it. "They're just firing at the retreating British," one Saxon student soldier snickers, "run away, run away, run away!" and a roar of laughter breaks out among the gang.

An officer casually states that you should capture the Chateau, and wait for the arrival of reinforcements, when all of a sudden you hear insults and curses from the hedgerows on the northern edge of the Chateau.

Our 3d and 2d artists have been hard at work to recreate the soldiers and weaponry of WW1. Seen below is the British Expeditionary Force Officer, 2nd Lieutenant, 1914-1915 provided by Benzie: 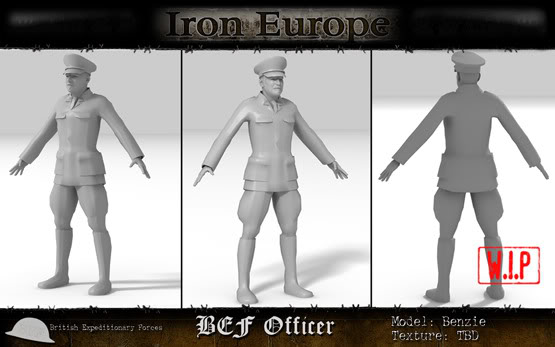 The officers unit description has also been provided to you by our research department for your reading enjoyment.

An Army officer must lead men into frightening and dangerous situations and sometimes make men do things that they never thought they could do. If you show consideration for your men, demonstrate leadership qualities, and set an example of courage, you will command your men's confidence, affection, devotion, and respect.

You must also behave in a fitting, gentlemanly manner when out of action. However, if you are deliberately unpleasant or oppressive towards your men, or show too much concern for your own safety, or are too eager to take risks and jeopardize your men's lives, or if you act in a cowardly manner in the face of combat, you will forfeit their respect.

Officers do not have to possess perfect character. If you are a strict disciplinarian, other qualities such as courage or leadership can compensate for this or other unpleasant character qualities; youth is also not an obstacle, if you behave in an officer-like manner.

War is like a field sport such as polo or fox-hunting, football or cricket. In playing the game of war, you fulfill yourself and become everything what you have been raised to be.
Copyright 2008 Gamburd USA

Next up we have the Imperial German army machine gunner. This one was provided to us by N!ghtmare. Again, the unit description is provided. 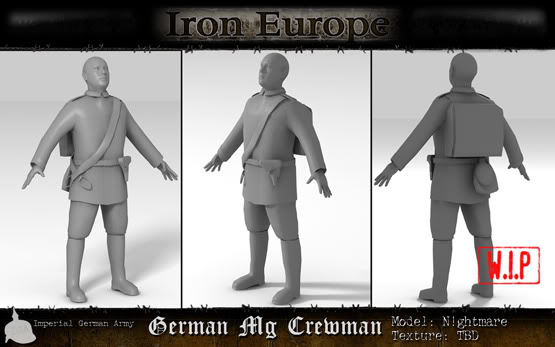 Each of the six Machine Gun Teams consisted of six men: a corporal commander; a first gunner, an assistant gunner and third gunner whose job was to carry the ammunition; and fourth and fifth gunners to carry or drag the gun.
Copyright 2008 Gamburd USA

To follow on from a previous media post, we are showing yet another wip of the early war, Saxon german musketier. This one is from N!ghtmare and textured brilliantly by Ekoms. 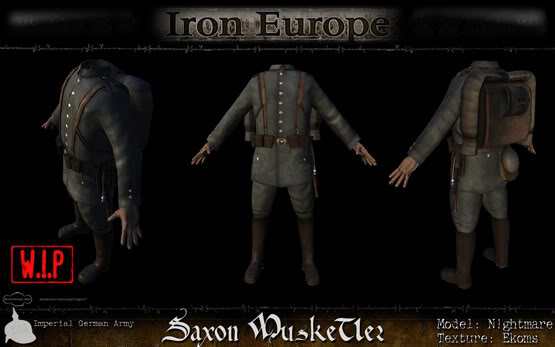 About 20% of the men in these four new Reserve Corps consisted of young German university and high school students and others, i.e. the Freiwillige, who had enthusiastically volunteered for military service during the first days and weeks after war had been declared.

The remainder of the troops from the Reserve Corps are comprised of a mixture of other personnel recruited from experienced Reservists and Landwehr (2nd Line Reserve), and partly from inexperienced Supplementary Reserve ("Ersatz" Reserve).

Yet, all of these men have not seen any significant combat, and thus are green, inexperienced troops. The experienced Reservists, Landwehr, and Supplementary Reserve have only trained for two weeks during the last year prior to the outbreak of war.

Since the outbreak of war in August, the university, high school students, and other volunteers, along with all the other regular Reservists, have only received eight weeks of military training; however, the student soldiers are wildly eager and driven by an intense fanatical patriotism and zeal to crush the enemy, and a willingness, if need be, to sacrifice their lives for the Kaiserreich.

The 245th Reserve-Infanterie Regiment is from the Kingdom of Saxony.
Copyright 2008 Gamburd USA

And now for some of the items that will be available to use. First up, we have the always popular SMLE Mk III brought to you by Ekoms. 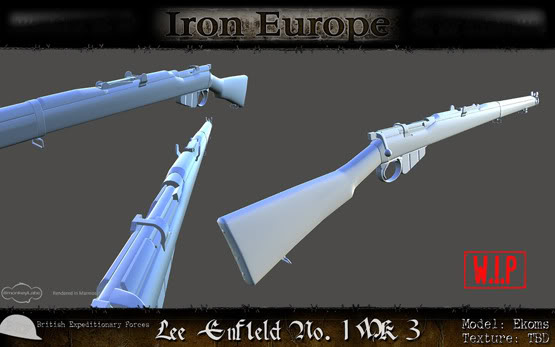 And, to help you see us coming in the future, we present the to you the British, early war Binoculars. 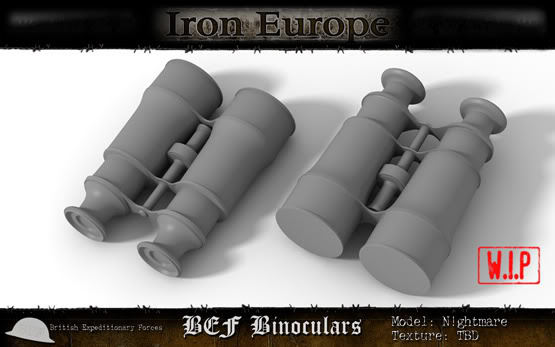 That is all the progress we have for you at the moment but we hope you drop by our website and say hello. We always love to hear what people think about the mod and are always too keen to reply to any questions you may have. Thanks for reading!

good lucking stuff guys, might have to purchase unreal, just for this ;-)

The mod is actually for RO:HoS, but since that wasnt a choice (and still isnt, I believe) in the game menu, we had to use UT3 because it uses UE3.

thanks hendrix, looking forward to 1985 as well.

wow this mod is looking so awesome! i'll see forward to it gana track it too

Sometime after 2010, since thats when RO:HoS is scheduled to come out.

Hope see some of this in the game.
Aboutww2militaria.com

Glad to see an update from you guys.