In September we've got a little media to show you, and some good news about our progress towards a public release.

Greetings from the WWI: Source team! We have some good news and some bad news for you this month. Let's get the bad news out of the way first - no gameplay video this month! The team has collectively had some time and hardware difficulties that have postponed it. As for the good news, we have some more information on our upcoming public release, as well as a little bit of media. Check out this reskin that deceiver has made for our Commonwealth player model! 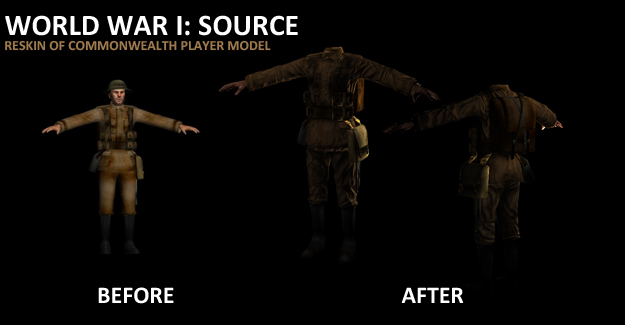 Lately progress has still been slow, since we have a small team with real-life responsibilities, but things are coming along and we are getting to the point where a public release is relatively imminent. Some of the work being done is like the reskin you see above - content updates, map optimization, etc. The rest is mostly concerned with tweaking balance and fixing our remaining outstanding bugs and issues.

We are considering releasing a public alpha (rather than our previous plans for a more polished beta) in the near future, although it would be unfair of me to try to put a timeframe on it. Your opinion on this matter interests us - would you prefer to play an alpha with solid, well-developed gameplay sooner, or would you rather wait a few extra months for a more polished (content-wise) beta release? Respond here or on our forum to let us know what you think.

That's all for this month, soldiers! See you next time, and start polishing your bayonets, 'cause it won't be too long now before you need them!

Cant wait to play this shizzle

I'm so glad this is still in the works. Can't wait to do a bit of hun bashing!

man this is gunna be good

looks much better, but get rid of the jackboots and add puttees.

Ahahaha oh wow the original texture was so very bad. Congrats on the vast improvement.

I would like the alpha if! It looks as good as Rnl Alpha 4. If not, Then wait. :D

Very nice job. I like how you showed the before and after shots of prvious models (screens, ect.). Quite frankly if something is imporved, show it. It demonstrates how the devs are learning as they go along, improving their mapping and overall feel. I would love to see an artical on this mod about early beginings and how you had to change pace to come up with new ideas to form what you now have today. Again, it looks great...keep it up!

Alpha sounds good, BUT everyone has to remember that it is an alpha and not to bitch or moan, or I'll beat you up IRL.

That way when it is a alpha people can provide constructive criticism and help shape the mod into a beautiful thing.

I think it's a nice change but the skin is rather dark. I think possibly make it slightly lighter. Great work on the normal mapping.

The before image looked like the allied soldier from RnL, good thing you changed it. :P

Excellent work. Very much an improvement.

heh, it's really about time someone's making a WW1 mod :) I am anxious to see how it plays.

amazing work; been long since I saw something that good.

Anything you guys decided I'll be downloading anyway.

It's kinda hard to see, but what i can is absolutely beautiful. looking forward!!!

Hum, my comment got eaten up...oh well. The new model looks fantastic and is definitely a step up from the original. Great work, and hopefully there will be a new German model sometime soon as well :3

Personally, I would like to play alpha, but I would not moan if you decided to postpone until beta. Incredible mod.