The biggest news for this update would have to be: DEMO TIME! Yes – that’s right! The Run Die Repeat demo went live last week! 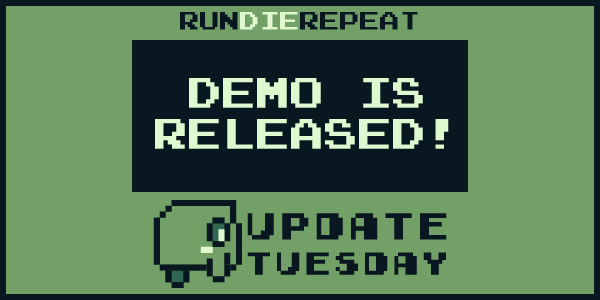 Hello everyone and welcome to another Tuesday Update for Run Die Repeat!

The biggest news for this update would have to be:

Yes – that’s right! The Run Die Repeat demo went live last week! I would absolutely love it if you were to download it and take it for a spin, so go ahead and scroll down to the files section and check it out!

There’s even a feedback form in the game itself if you’d like to send some feedback =D So – with that said – here’s the Tuesday Update with some video goodness:

I decided sometime last week that I would be well served to work on some Game Jams to try to up my skill set somewhat, so I recently joined into the “Can you survive this jam” Game Jam over at Itch.io – Itch.io and I’ll be releasing the game I’m making for it, called “Astronaut in a Wheelchair” for free (at least initially) once it’s complete.

Astronaut in a Wheelchair is a “survival” game about an astronaut… in a wheelchair. Done up in my apparently favorite style of “early generation console”, it’s a 2D sidescroller where you have to use your missile launcher to move yourself back and forth and avoid the horde. Be on the look out for more on that! I really feel like participating in these jams will help me to produce a better quality product for Run Die Repeat in the end.

As always, thanks for reading, and be sure to leave any comments or suggestions!

not bad, not bad at all ! really love the classic art style :D

Hey thank you! I appreciate your feedback - thanks for playing!