Greetings, Comrades! If you recall, I sent a transmission saying I would be out for a month, but some problems in my personal life have been sorted, and now I am back on partial-duty. I have received a sample track from our composer for the purpose of this mission, we decided to give it a try, the track itself is confidential, and I cannot show you, but it is of very high quality! That's all I have to say right now, this is Cobra!, signing out. END TRANSMISSION!

I know I said I'd be taking a hiatus, but a lot of exams and assessments have been finished, not all of them, but a lot, so now I have a little more free time to do things...

I know, I know, I should be spending my time studying for the rest of the exams, but I put in a couple of hours a day doing that, after that, nothing to do, so back to working on Rossies 3D!

I haven't done much in comparison to other months, due to exams. I've mostly been working on the first level of my game, I kept modelling houses and things to try and capture that "Glasgow" feel, so I've spent a lot of time on them. I think I've finally got it, a second opinion from has said it feels like Glasgow, but friends tend to tell you what you like to hear, not saying I don't trust them, but I'm not totally satisfied about something until I hear it from someone I don't know.

Here's a screenshot of the level so far: 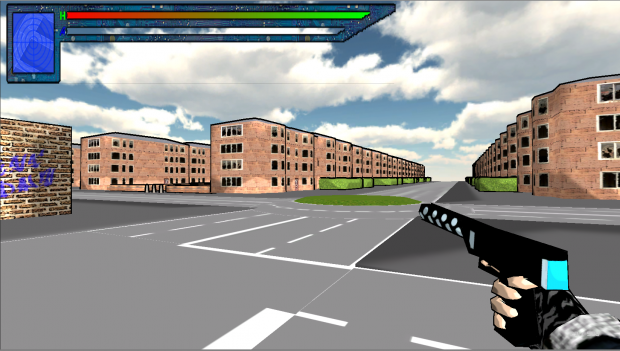 Speaking of friends, that same friend composed a song for the game, this guy plays in a band, they play a few gigs now and again, so he has experience in the music industry.
He sent me the music he made, and it's amazing! It sounds exactly what I wanted for the game! I never even told him what I had in mind for the game's music, It seems we had similar visions! It sounds very professional as well!

I would show youse the track, but it hasn't been uploaded anywhere, he sent me the song via. email. I don't feel comfy with uploading things that aren't entirely mine, so sorry, no previews! You'll just have to wait until the game (or rather, demo) comes out...

He said he would also do some more tracks for the game. If things go well, Rossies 3D will have a beast of an OST! I hope to release a CD/Download soundtrack, but it's up to him.

It's awesome to have him on board for the project anyway!

One last thing I remember doing for the game, is adding 2D objects, that constantly look at you, similar to some old 6th gen games did for small detail objects, such as lights, fans, chimneys, or even sometimes trees!

That's all that that's really happened since the last blog, I've spent so much time on designing and making the first level that I'm sick of look at blender, and textures of bricks... and windows... and doors... See youse in the next development blog.