We have some cool equipment to show off! But also a lot of information about our progress.

The last couple of weeks have been really exciting for us! We finally have our public alpha on itch.io, we finalized all the paperwork with Valve so that we can get started on the steam features we want to add like joining a friend's game, and we are ready to talk about our release plan.

We had been a bit disheartened with the amount of people brought in by Greenlight itself. We were expecting somewhat of the same results on itch.io (An indie game community like kongregate and newgrounds), but the results have been far more positive! We have had more people download our alpha in the first couple of days then the number of people who voted for us on Greenlight; to top this off we have even been featured on the homepage which has given us even more exposure for the game and many new testers to help us out.

Some of you have been asking if there is a way to support us early on and itch.io would be the best way to do it currently. When you go to download the alpha you can also add a donation to us... so if you want to treat us to a cup of coffee we would be eternally grateful.

Greenlight has been finished but we still had a lot of paperwork that Valve needed from us; Now that we have been accepted as a partner and all the business paperwork has been approved we can finally start working on steam integration.

So what does steam integration mean for you? We are now able to use the Steam API which allows us to now add in things like screenshots, the overlay, achievements, and most importantly friends being able to join your game without an IP will be in the works.

We also will be working on getting our steam store page up which will allow us to post news updates; as well as enable the community forums for people to publically ask questions, share feedback, and share any artwork they might have.

We are working hard towards our next alpha build for everyone and would like to thank everyone who took part and continues to take part in our alphas! The movement and combat alpha was a big hit and we were able gain some really great feedback so you may see some patches to the current alpha with those changes.

Moving forward we will bring our focus to working different biome generation and making sure the world feels alive and interesting which will be our major milestone in starting early access on steam along with a lot of smaller things like teleporting players into dungeons, server lists, spawning monsters, ect...

When we start early access one of the important things we want you the players to know is how much we value you! That being said we will be looking into ways of rewarding those who support us early on so if you have any ideas about potential rewards for the community please feel free to comment and share and we will look into them. 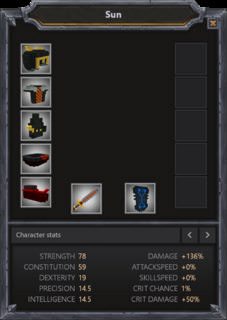 Example of character window (no character preview yet)

In Tal'Doria players will have access to 12 different slots that will act as the players' armor and gear. You have Head, Chest, Hands, Weapons, and Offhand slots which will have drops that will only be wearable by a given class, your Amulets, Belts, Rings, and Feet which will have loot that any class can wear, and then finally your Cloak, and Pet slots which we will go into more detail now:

The cloak is a sign of status and is only worn by some of the most powerful Tal'Dorians in the game, if you have one of these it means that you most likely worked hard for it and are not someone to mess with.

Pets can be leveled

The Pet slot allows you to bring along a single pet to accompany on your journey... But they are not easy to come by and give permanent bonuses when you have invested time into training them. 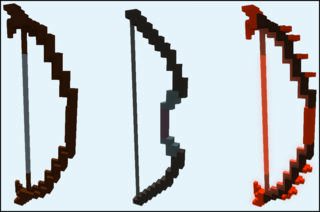 Most of the equipment that is found or crafted in Tal'Doria will not only have different stats but will also offer you visually different looks to your gear, the two exceptions being Rings and Amulet which will not show up on your character, otherwise the rest of the 10 slots will show up on your character while you play so as your apprentice becomes a true knight his gear will reflect it.

Another cool thing is that each class will have an offhand item that relates to their class; the knight has a shield, the archer has a quiver, and the mage has a tome. Each class uses their offhand in a different way but we are looking forward to sharing about that with you in another DDD, in the mean time here is some images for some of the classes offhand objects

As always don't forget to join us online! You can reach out to us personally on discord just follow this link: Discord.gg and don't forget to share with your friends about the game, every tweet, post, picture, and comment helps us greatly.