Post news RSS [Primetus - Dev Diary] Rising From Our Ashes: PhyNXT is Back!

It's been a long time since our last article, but we've been back at work on Primetus for about two months now and boy have we got some development progress to share! From slimes to quests, Primetus, as it was envisioned, is starting to come together.

There's been little news squeaking out of this PhyNXT page for some time now and unless you follow us on Twitter, you probably wouldn't know that we've been back to work on Primetus.

Well, dusting off the project page here, and ignoring the internal team drama behind the scenes, let me go ahead and catch you up on where Primetus is currently at in development.

From the outset of our Indev 0.0.1 build, we wanted to achieve the following:

So, when we came back to development, I had tried to pick up right where we left off with everything, but quickly found that to be an insurmountable task between half-finished and non-functioning code and a mountain of lore that was left in purgatory -- everything was a mess. The lore was easy enough to sort out, that was stripped to the basics while preserving core details (which I'll leave for a follow-up article next week), the code base, on the other hand, had to be completely thrown out.

With a new scene to start with, I found some premade assets to work with and got to it -- as an aside, a little about me as the lead developer here, my background is actually in physics, so while programming isn't a foreign concept to me, anything art related is -- to pay my respects to these asset gods, I'd just like to mention the AxeyWorks asset packs on the Unity asset store are great and the modelling tutorials by Sebastian Lague on YouTube are great! 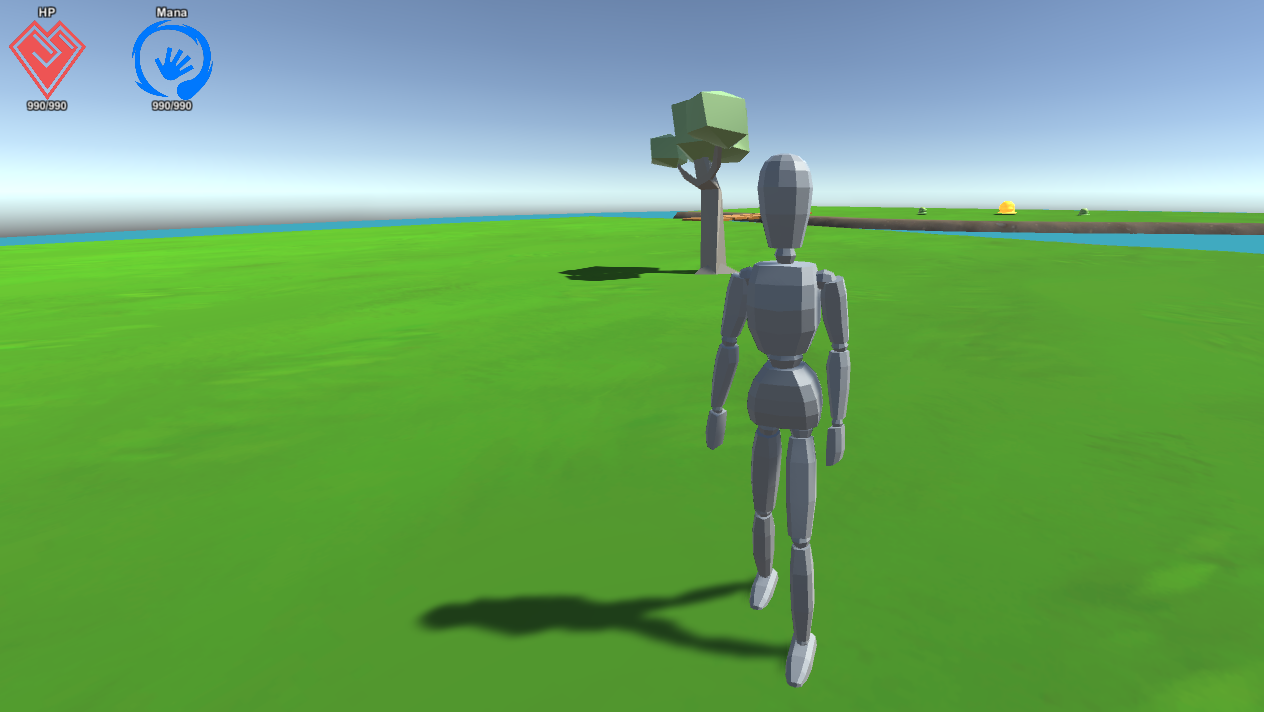 Step one was to get an inventory system working. That was easy enough with Unity's UI tools and a couple of lists to hold items, the item database was improved from the last time the project was touched by switching from XML to JSON, not a big change, but, in my opinion, JSON is much more readable. With the inventory implemented, albeit with a few bugs here and there and lack of quality of life functionality, the equipment system was next and was just fully implemented last week.

The big problem with the equipment system the way I decided to implement it was for equipment with multiple attachment points (say gloves or pants, which have to attach to each hand or each part of the legs to be able to animate properly), the couldn't just be added as a single object, instead, they have to be "unpacked" from a prefab and attached to the appropriate points on the character when they're equipped. The unpacking part wasn't too hard, what was difficult was keeping everything modular. Modularity has been my mantra as I've gotten back to development, the idea being that if the code base were delegated to someone else to take care of, they could add onto it or remove a piece here and there to fix something, rather than have to start from scratch again.

Small details like the item details and health/mana displays were added while working on the equipment and inventory systems, I won't go into too much detail on them, but I will mention, another useful resource for the artistically uninclined (like yours truly) is Game-Icons.net. You'll also notice the gloves, boots, and helmet aren't exactly stellar -- that's programmer art, but it's getting better!

With the inventory and equipment systems, the next step was making a combat and stats system, which really became a matter of figuring out how we can keep things scalable going forward, not too complicated, but interesting. The combat calculations will probably change going forward, but for now, the important part is that Dave (our affectionate name for our current player model) can go around beating up slimes to his heart's content. 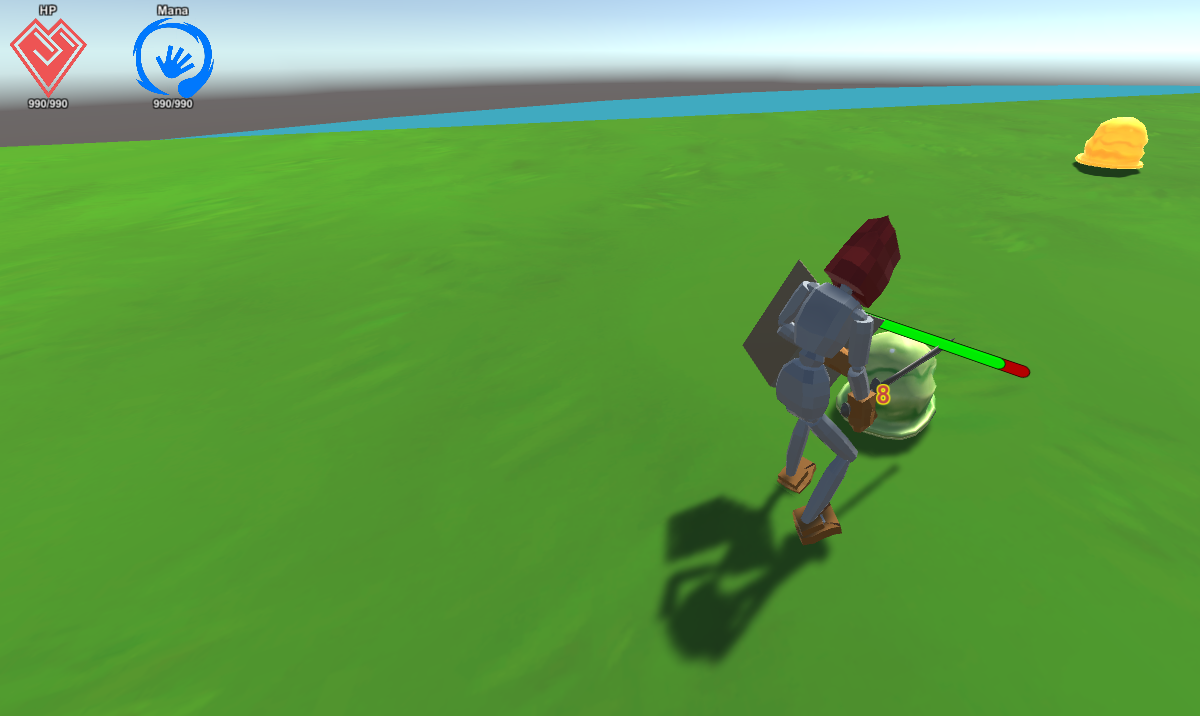 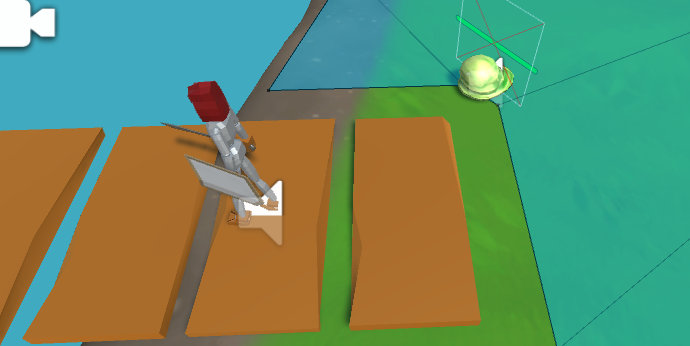 A couple of conditional if statements later to make sure that the enemy has a path and is able to even reach the player before attacking cleaned that up, and I also added a minor behavior improvement where the enemy goes back from whence it came if the player gets too far away. The only thing left to add to the basic enemy AI is random patrols, but that's not a top priority item right now.

With all of that implemented on the programming side of things, our environmental artist (Megan) and animator (Ali) shouldn't be left out of the development mentions. Thanks to Ali's quick work, I was able to implement combat animations and get the combat system working in little more than two days. In addition to that, Megan's awesome modelling skills helped to be able to implement resource gathering for a variety of resources that will offer a huge pool of items for the crafting system as I get to work on that. Our team's level designer, Hiro, and concept artist, Jacob, have also helped pick up the artistic slack in helping to flesh out a style that fits the narrative we're striving to put together.

We've still got a long way to go, but at this point, we can start to put things together to show off to the community, and that has the PhyNXT team more excited and more committed than ever!

I'll follow up with an article dedicated to lore and storytelling next week to give a better introduction to the actual game beyond some technical mumbo jumbo.