Version 4.6 offers much new content and improvements, focusing mainly on the new mission system for Lü Bu and updating of various UI elements.

The new version 4.6 Update adds quite a bit of new content to the mod, but the main component is the new mission system for Lü Bu's faction. In a series of 12 missions, the player can lead Lü Bu from his initial war for Yan province with Cao Cao all the way to uniting the war-torn nation of China. As with the other existing mission systems for the main factions, the player can also gain the services of exceptional characters, such as Xu Chu and Gan Ning, as a reward for completing each mission. Lü Bu's starting position is tough however, once his position is stabilized, he can become an unstoppable force that will overrun the seditious and rebellious warlords plaguing the country. Below you can see the first mission for Lü Bu, which sets the stage for his rise to ultimate power. 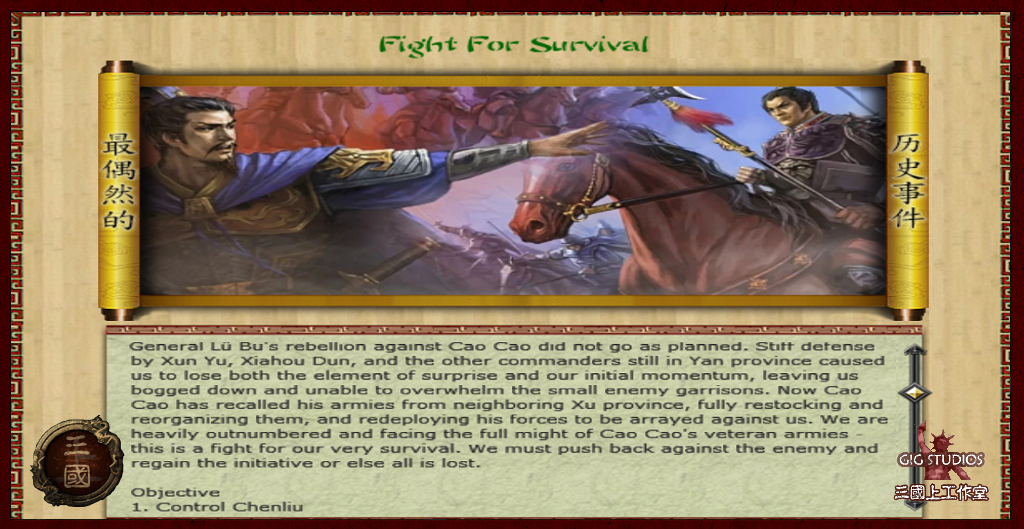 In addition to Lü Bu's new missions, another newscript was created for Liu Bei. This newscript allows for Liu Bei to invade and conquer Shu, but with specific prerequisites. The AI must control both the Liu Clan and Ba-Shu factions, the player cannot control Lü Bu's faction, the Ba-Shu faction must control the city of Chengdu, and the Liu Clan must be eliminated prior to the year 200. If all of those prerequisites are met, then several events will fire which start with rumors of Liu Bei's impending invasion and end with Liu Bei taking the Shu region. I figure it would be much more interesting for the player to face Liu Bei than Liu Zhang, as well as adding some bits of historical realism to the mod. Below you can see two of the events for this newscript. 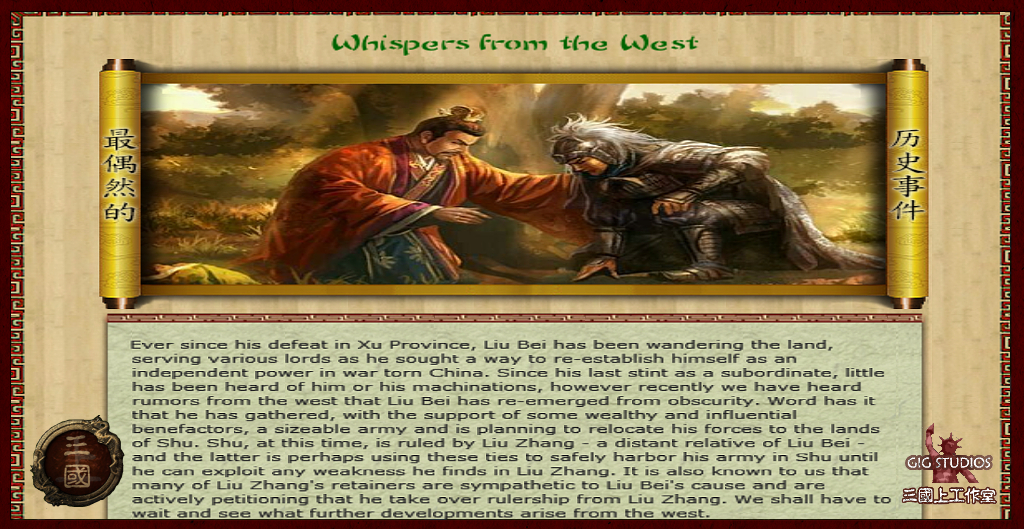 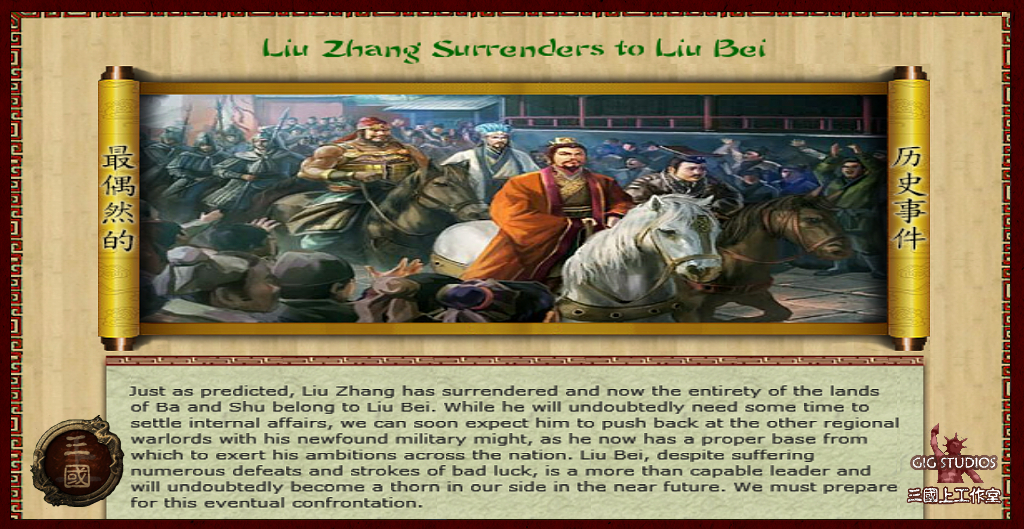 Another major aspect of this update was the improvement of several UI elements. One, which had not been updated since the mod was in Beta, was the unit-type banners you see on the battlefield. Previously all of the banners, regardless of unit type, looked pretty much the same. At a glance, it was impossible to tell what type of unit the banner belonged to, and so I wished to remedy that. Now there are distinct banners for all unit types (sword, spear, cavalry and missile), as well as generals and faction leaders. The banners will have the color scheme the owning faction and simple icon for the unit type, as well as different shapes, making it much easier to distinguish between unit types by using only the banners. Below you can see the new banners for spearmen (Sun Clan) and cavalry (Liu Clan). 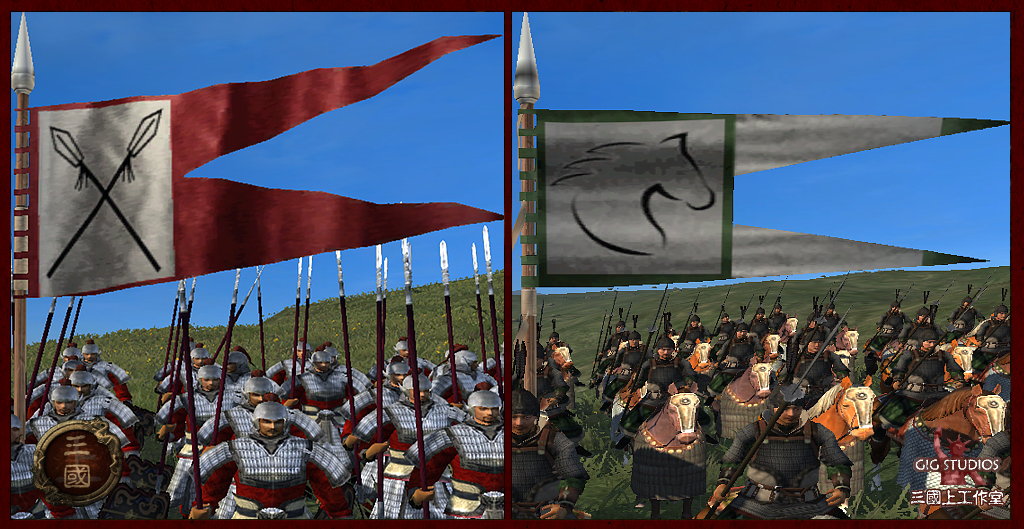 One other thing I would like to mention, was to re-addition of a unique unit for the Yuan Clan: Yanyun Cavalry. So these guys were in the mod previously, as a shared unit between the Hebei region factions, but at some point they were made into a Yuan Clan exclusive unit. Unfortunately, and I only discovered this a few days ago, but they were somehow not included at the start of the campaign and therefore could never be used during the campaign. I fixed that and they are now fully usable by the Yuan Clan at the start of the campaign. Below you can see a pic of the Yanyun Cavalry beginning a downhill charge. 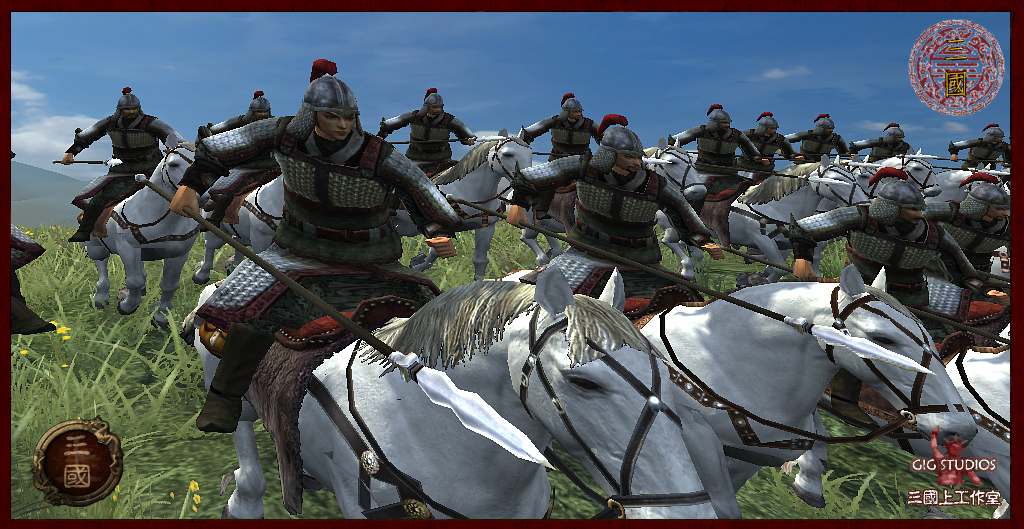 In addition to all of the things mentioned thus far, there was also an overhaul of both the Wudoumi Sect and Heishan icons - the former now has Taoist and Celestial Master symbols, while the latter says "Black Mountain" instead of the surname 'Zhang'. Captain portraits and cards were also overhauled, which now feature a face with the relevant faction banner in the background. The Wudoumi Sect has a new unique unit - the heavily armored shield and spear Zhanghan Guard - and a new low-tier pawn unit called Wudoumi Fanatics. The Yue faction also had their unique Wuyue Raiders replaced by the halberd-wielding 'Goujian's Chosen', while Gongsun Zan was given a new battle model and the unique Camp Raiders unit had their battle model overhauled. Finally there was more UI work with several cities given new images for their "Historic City" building, AI recruitment personalities were overhauled, and several characters had their traits tweaked and/or received new portraits.

The Version 4.6 (Fengxian) Update can be downloaded here and has instructions on how to properly install the patch (point installer at Medieval II Total War folder).

IMPORTANT NOTE: You must have the Rise of Three Kingdoms 4.5 Full Release installed prior to installing the RoTK v4.6 Update. Also, as usual, the patch is NOT save-game compatible (will break your save-games).

Thanks for the update and for keeping on with this mod! I still go back to M2TW from time to time

Bruh, and just when I downloaded 4.5, 4.6 comes out. Anyway great work