Version 4.3 offers much new content and improvements, focusing mainly on the improvement and expansion of the Nanman roster and overhaul of the Sun Clan.

It is time for another update release for Rise of Three Kingdoms, this time to version 4.3. As with the last version release, this one has quite a few quality of life changes but, more importantly, it will focus on drastic overhauls to both the Nanman unit roster and Sun clan starting position and character acquisition. Starting with the former, the Nanman have been a part of the mod since it's days of beta, however since then they had had minimal attention given to either their roster or unit models and textures. After the previous v4.2 Korea Update, I figured it was time to finally make some much needed changes to the Nanman, starting with eliminating the "cookie-cutter" soldiers in their units. A great example of this is the tier-1 Nanman Warriors (seen below), in which I created five more face variations, three more headband color variations, and three more belt/waist-coat variations. The cookie-cutter soldiers are gone, replaced with a much more diverse and colorful band of warriors. 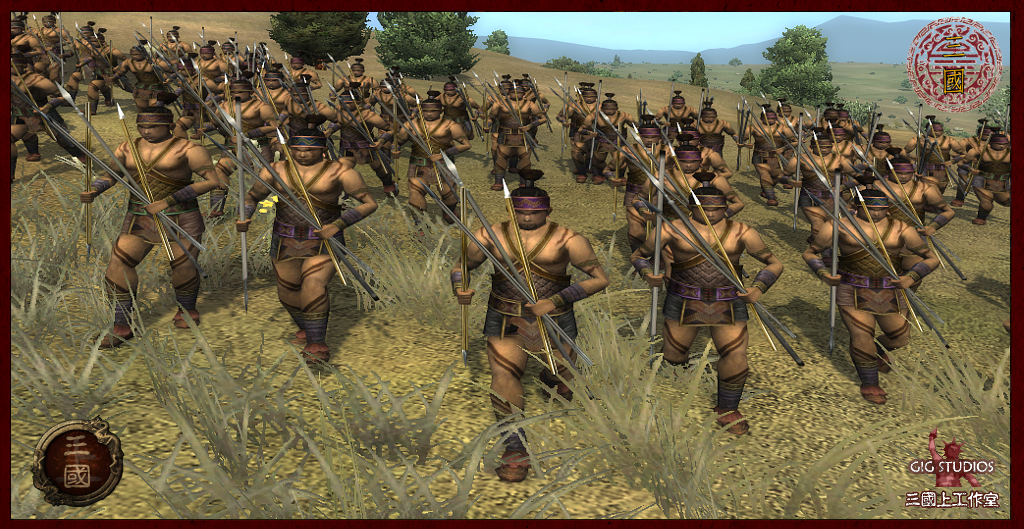 Another example is the tier-3 rattan units but, instead of just creating new face and color variations as above, I also added two more helmet variations and completely re-textured both their armor and clothing. What we have now is a much better quality product than before, specifically the rattan armor that these troops don for battle. 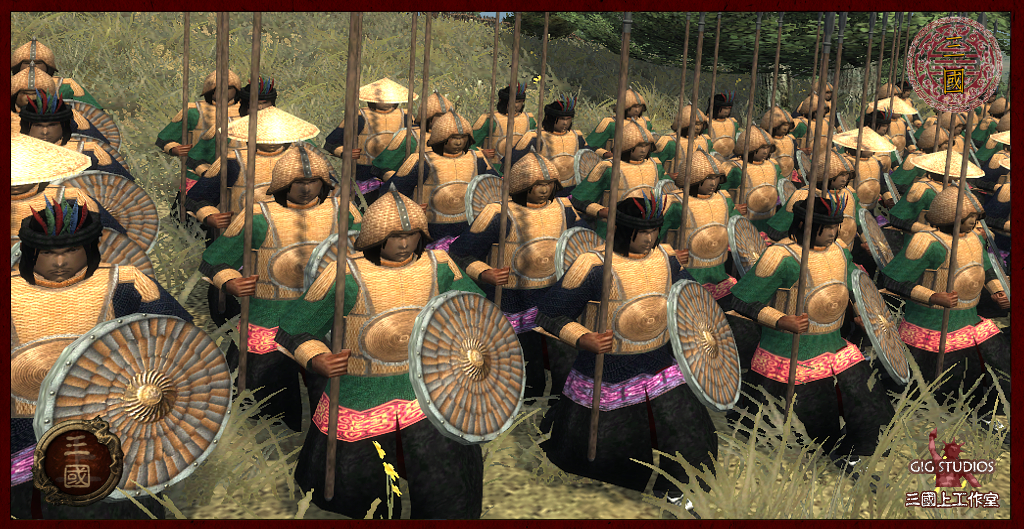 Up until now the Nanman did not have a true "armored"-tier of units and, particularly in the late game, they did not have any units that could even come close to matching what Han factions could muster and throw at them. Such was pretty unfair and unbalanced. That has changed with the introduction of the Tengjia Guard units. Essentially these are on the same level as the Han "armored"-tier of units and come in two variations: sword or spear. They are tough, reliable units and bring to the Nanman a 4th-tier set of units that allows them to compete with all other factions in the late game. 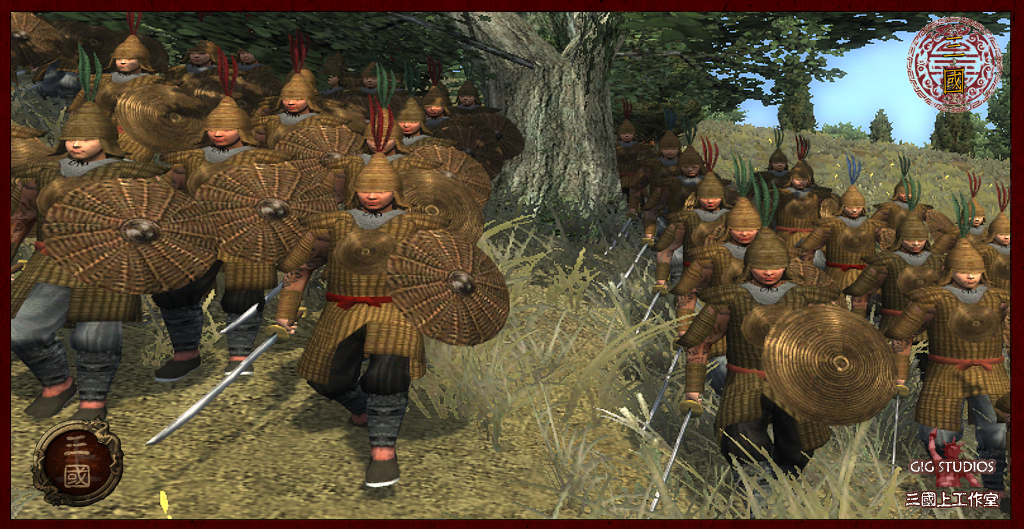 Along with the creation of soldier variations and re-textures, there was also a much needed change to the Nanman unit roster. As you can see in the second picture above, the Nanman now have spear and shield units, which is particularly useful in countering the cavalry of the Han armies they will eventually be forced to fight. Spear and shield units are available from tier-2 to tier-4 and have the same recruitment restrictions as all other Nanman units. And finally for the Nanman, I made some major modifications to Meng Huo's battle model and his bodyguard unit. I re-textured and re-modeled about 75% of Meng Huo, added Lady Zhurong to his bodyguard unit, and created a modified Tengjia unit (sword and shield with javelins) to protect their King on the battlefield. 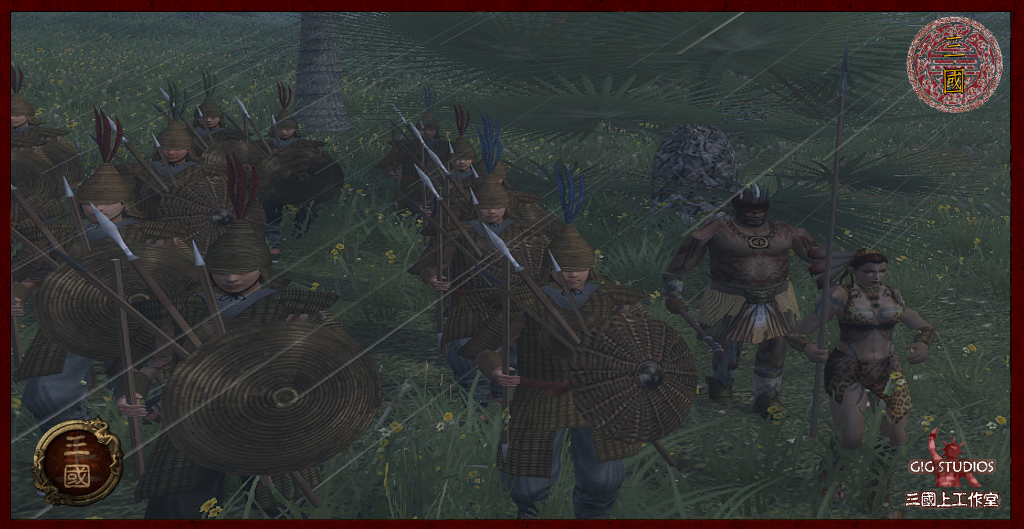 While the changes to the Nanman were by far the most time consuming and labor-intensive, I also made some very necessary changes to the Sun clan in terms of both their starting situation and how they acquire new characters. For starters, the Sun Clan has been reduced to two regions, with one of those regions (Danyang) being given to the Yangzhou faction and the other becoming rebel. Below you can see how the new faction selection screen looks with those changes. 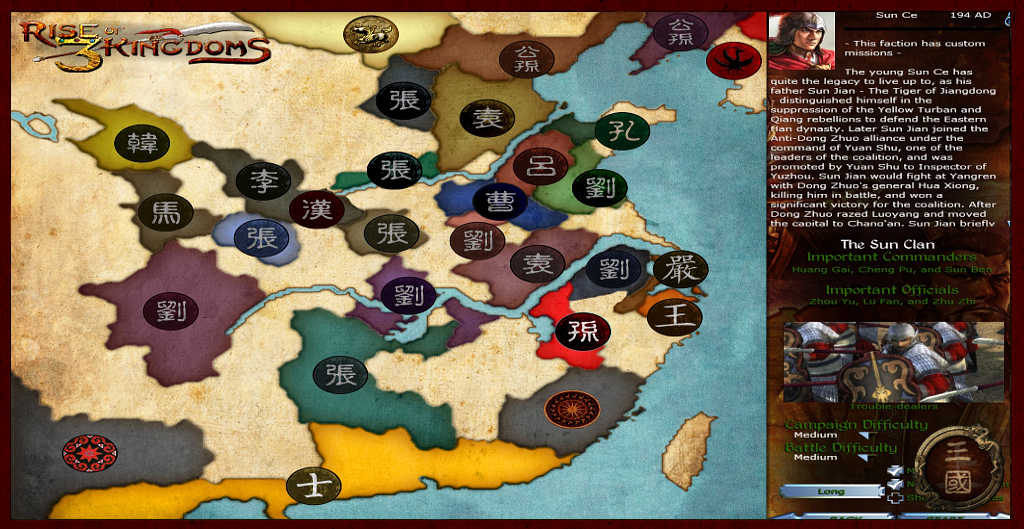 In addition to that, the number of starting characters for the Sun clan have been greatly reduced. Now it consists of characters who historically served Sun Ce at the onset of his invasion of Yang Province (mostly family members and former retainers of his father, Sun Jian). But those characters that were removed can be be obtained through two methods: conquering specific regions and completing missions. While that is similar to how it was before, the characters that join, what causes them to join, and where they spawn has received an overhaul. In the image below, you can see the starting campaign situation for the Sun clan. 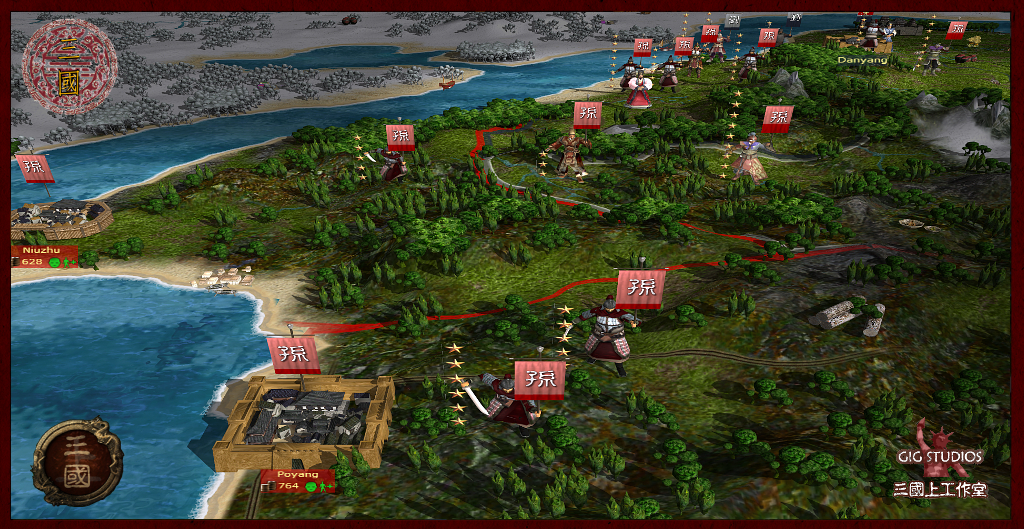 Finally, and this was a pet project of mine, the great hero Qu Yi has been given some love with his own unique battle model. For those of you who don't know of Qu Yi, he was arguably one of the best field commanders during the Three Kingdoms era and was responsible for Yuan Shao's total victory over Gongsun Zan (who had one of the strongest armies in all of China). He is often overlooked, mostly because in the novel he is a nobody and is unceremoniously killed off by Zhao Yun, but in the official histories he was an absolute beast that was executed for making his liege Yuan Shao look bad. Even Cao Cao, upon defeating Yuan Shao and acquiring many of his officials, lamented that if he could have had Qu Yi join him he could have easily conquered China. Maybe not, maybe so, but in any regard, this guy deserved something nice. 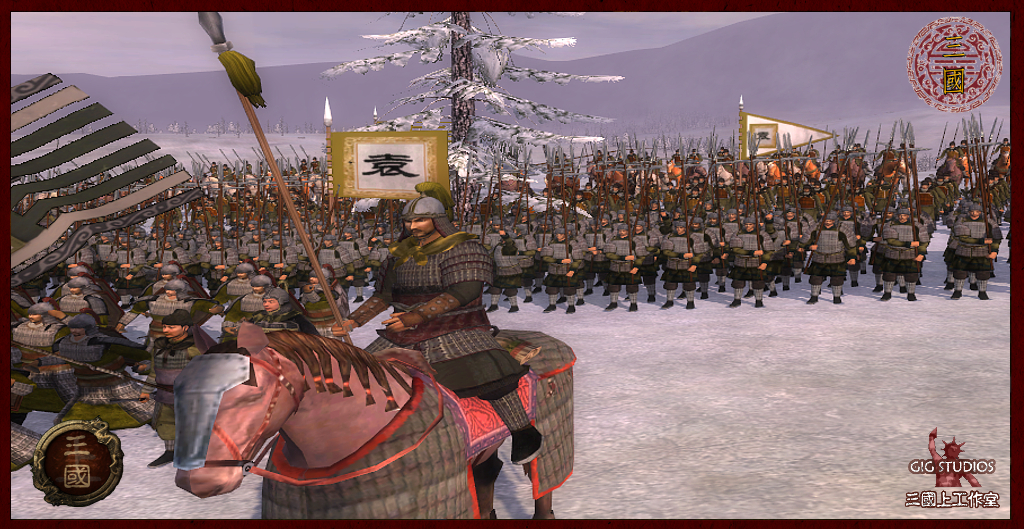 The v4.3 Update also does a bunch of modifying to unit stats, specifically unit upkeep, recruitment cost, mass, and stamina, while specific changes were made to a few attack and defense values of units. As mentioned at the beginning of this article, some of the quality of life improvements are fixing the incorrect road levels that can be built, giving 4 recruitment slots to Huge Cities, the update of dozens of portraits, and including the fixed unit cards for ships (that were "missing" because I previously put them in the wrong folder).

The version 4.3 (Nanman Sun) Update can be downloaded here and has instructions on how to properly install the patch (point installer at Medieval II Total War folder) - note: the patch is NOT save-game compatible.