Hello European citizens under Russian occupation. All is well. Do not attempt a pointless struggle, we are simply here to restore your democracy and spread freedom. Repeat after me, all is well.

Anchorman Eric Brice took a deep breath after he sat down, feeling uncharacteristically nervous for a man who was more than used to presenting important news to an audience of millions during prime time. "We'll be on-air in 30 seconds!", announced the new Russian floor manager with a threatening tone. "And remember: Do not try any tricks. We are watching you, svoloch!" A few months ago, the ECAN Media Centre in Berlin was forcibly taken off the net by a Russian Spetsnaz team that barged in during a live broadcast. Warning shots cracked through the room, accidentally killing several members of the news team while Eric dived under his table. Now, the popular anchorman was forced to collaborate and recite the propaganda of the Russian Federation. His remaining colleagues were held at gunpoint and all he could do was to add subtle, sarcastic inflections as he read off the teleprompter, hoping that the Russians' grasp of the English language would not be firm enough for them to notice. The cameras were aimed at him like the rifle muzzles of a firing squad and the floor manager started counting down: "Aaand we're live. Davay!"

Good morning, ladies and gentlemen. This is Eric Brice for...Federation Front News, from our new studio in Berlin. From now on, I will present you the pure, unfiltered truth about the war of European aggression. 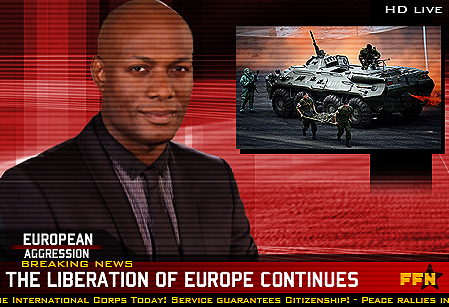 Germany. The fighting forces of the Russian Federation continue their relentless advance through the heart of Europe, meeting only little resistance along their way. The majority of the European Continental Army is sensible enough to surrender in front of our kind, well-disciplined soldiers whilst only a handful of fanatical nationalists dare to put up a senseless fight. The 106th Guards Airborne Division under the command of General Orlov has established a stable beachhead in the western city of Koblenz, securing vital bridges that will take our forces across the Rhine and onwards into France. In the far north, the venerable 20th Guards Army led by General Zhukov is now within reach of the Dutch border. Together, the two veteran commanders are trapping a sizeable portion of the German Army in the polluted Rhineland. It is reported that the glorious General Aleksandr will soon mount a decisive attack to crush their futile resistance once and for all.

Czechia. Nikolai Suvorov has paid a surprise visit to Russian troops in the liberated capital city of Prague. During an interview tour, the President inspected the city's largest hospital which is used to treat the injuries of Russians and Europeans alike and even volunteered to donate an entire litre of his own blood to save precious lives. During the procedure, he once again stressed that the people of Europe are not the enemies of the Russian Federation. Two decades ago, a cadre of military warmongers and demagogues has exploited the chaos of the GLA insurrection to turn the European Union, a trusted long-standing partner of the Russian people, into a fractured mosaic reminiscent of a failed state marred by backwards provincialism and disunity. The entire nation of Russia will not rest until the old order has been restored and the united states of Europe can once again assume their rightful place under our benevolent Federation, he explained.

Russia. Official sources report that border guards in the Far-East district have intercepted a Chinese infiltration force. At roughly 2AM local time, a group of fifteen foreign agents was caught in the act of sabotaging a border fence in Primorsky. The reckless intruders immediately opened fire on the border guards and died in the ensuing skirmish. Concealed weapons, computer equipment and outrageous propaganda material that was, without a doubt, intended to spread ethnic aggression among the local communities were fou*static* 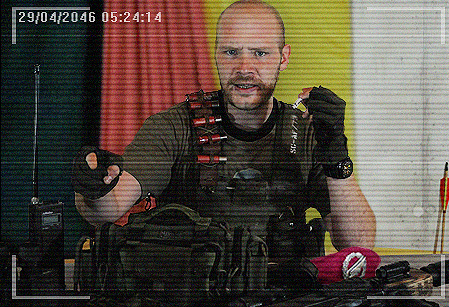 This is Hauptmann Jaeger of the Berlin resistance. Don't listen to the lies of the mass media. The Bundeswehr is holding Ivan at the Weser river and receives ample reinforcements from our neighbours as well as several ECA battle groups. Austria and Italy have fortified the alpine redoubt and the combined navies of Sweden, Norway and Denmark have locked down the Baltic Sea. The numbers of our resistance are growing day by day: For every city the Russian's obliterate, for every innocent shot dead by some green conscript or Shock Trooper scumbag, and for every inch of our homeland they defile, our numbers rise. We will outsmart and overtake them. Spread fear among their ranks, give them no quarter and not a single moment's peace. We have our eyes everywhere, we do not forgive and we do not forget. And: We are coming for you, Aleksan*static* 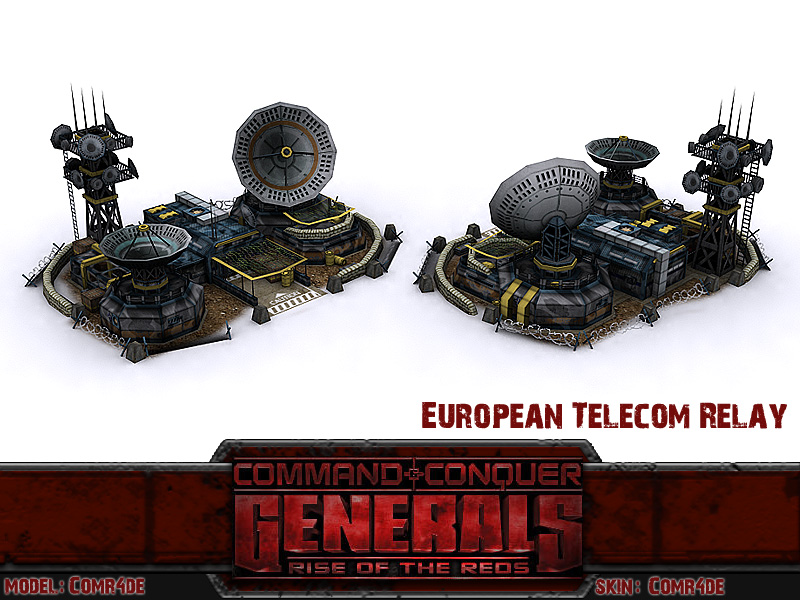 Established in 2032, the European Communications Agency Network (ECAN) was formed as one of the first cooperative institutions of the new European community and assumed operations two years prior to the formal creation of the Continental Alliance itself. Initially, ECAN was conceived as a joint initiative of several semi-nationalised telecommunications companies, news agencies and public broadcasting services and offers a wide range of entertainment, documentary and news programmes on television, radio and the internet. As a reaction to the rampant, dehumanising sensationalism of the past, the new European media corporations are obliged to follow a strict set of ethical guidelines backed by national laws against deceptive advertising, dubious 'reality' formats and smear campaigns. In a world where many news services are heavily affected by corporate interests or propagandistic posturing, ECAN News, with its popular anchorman Eric Brice, is regarded as one of the more impartial and level-headed programmes. However, if there is one thing that ECAN could potentially be accused of, it would be its rather amicable relation with the European military task force: Ever since the invasion of North Africa in 2037, the Continental Army works in close cooperation with ECAN's war correspondents who operate from within the Telecom Relay in order to provide the European public with a close insight into the operations while the military may benefit from an additional source of income generated by the ratings. Beyond that, the Telecom Relay also offers access to Europe's extensive satellite network, allowing ECA forces to take a clear look at their entire area of operations for short periods of time. 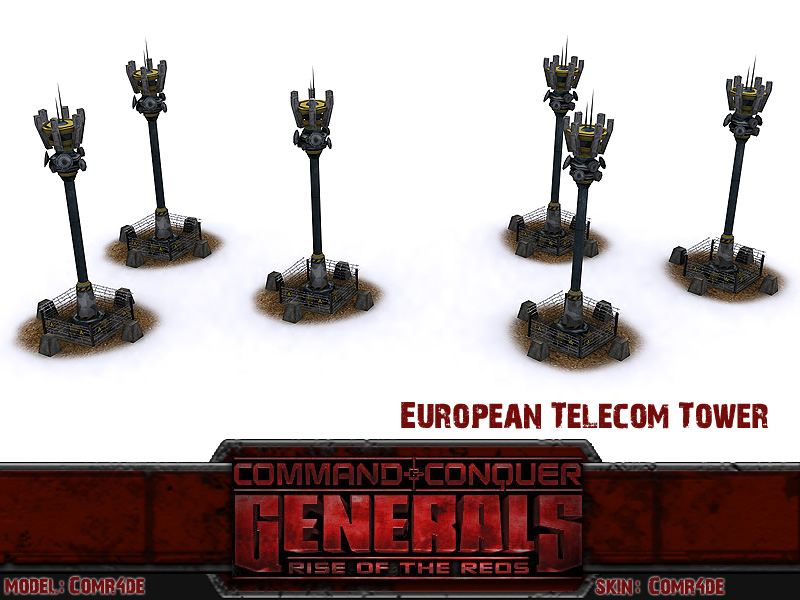 When the Russian advance into France began to stall and the frontline degenerated into a vicious back-and-forth between the two warring factions in the bitter winter of 2047, many European soldiers reported a new phenomenon: Whenever they recaptured a front sector - even if it was only for a few hours or days until the next counter-attack dislodged them - they noticed that the Russians had done their utmost to dismantle any bit of valuable technology they got a hold of before their positions fell. From the pressure-sensitive plates that had been installed on many motor ways in order to generate electricity to the intricate network of fibre-glass cables that formed the backbone of all continental telecommunications, many of these items later reappeared in Russian cities. Ironically dubbed the 'snatched earth' doctrine, this tactic nevertheless had the same effect as a classic 'scorched earth' operation, for even though the assets were not destroyed per-se, they still became unusable for the Europeans. In order to restore the vital telecommunications capacities in liberated areas, ECA technicians began to install these Telecom Towers which process additional data traffic, thus generating extra funds in conjunction with the Telecom Relay. It is advised that additional Towers can only be constructed as long as the Relay is intact.

Just a simple question, when you get around to revealing the ECA navy, will there be something to do with the Baltic lockdown? Also, that Hauptmann Jaegar looks badass! Will he wear the beret in-gme so we won't mistake him for Col. Burton?

Can't wait for the ECA to kick the Russians out of Germany! Go ECA!

oh come on fellas, how was this spam? Up that last comment if you're a Russian faction player!

The whole storyline is interesting. I wonder how it ends.
Hopefully (I remember your promise, dear developers) it will not fall into simple "Russia gone bad, one Russian guy there is absolute evil, Russia will get all the beating afterwards" like 99% stories of game industry if Russia is involved. (Here in Russia we have a term for such games - "branchy cranberry" - all red, sour and tart).

You guys should write a book for real. Your method of covering timeline from different angles is really cool.

I can reveal that Russia is going to suffer some heavy consequences for starting this war, but it's NOT going to boil down to the total destruction of the Russian nation if that's your concern. They're in for a bad beating in the same way that the ECA is taking a bad beating at the moment, but the conflict will actually be resolved in a way that allows both factions to survive and have a future.

Makes sense. Eye for an eye.

Why don't they finally settle down a peace treaty, I always see in any anime, games and story is always about on how to actually conquer Russia, where the bitter realistic peace negotiation, mutual truce agreement is completely out of the question by western media.........

Well, there's still a LOT of content for us to reveal, so this conflict does have to continue a while longer. After all, it would be a bit jarring to read render descriptions for awesome new unit when the actual war in which they were supposed to be used is basically ending already.

I wouldn't be surprised if the GLA manipulated the ECA and Russia into fighting each other to begin with.

The GLA has wronged both the ECA and Russia (by attacking central Europe in ZH and driving the Russians out of Africa respectively) but they will not be the ones pulling the strings behind yet another global conflict again. Their operational capabilities have been cut down and their territory is now contained in Central Africa. Basically, we didn't want them to be the driving dramatic force of the story -again- after Gens and ZH so we gave them a lot of limelight in that African sub-plot prior to the Russo-European War, but as far as WW3 is concerned, the GLA has nothing to do with it. It'd be a bit disappointing to conclude this climactic war between two global superpowers with the realisation that it was all a sham by those unwashed, cartoonishly evil tunnel dwellers that -somehow- manage to manipulate everyone without them noticing even after being driven to near-extinction like three times already.

Interesting. So Russians are the United Citizen Federation and the European Resistance are Anonymous. I'm not sure if I want to see how this plays out or run before the proper war crimes start.
:p

PS: It seems either China is picking its side or Suvorov is doing it for them.
Makes me wonder who shoots first.

Damn where do you get the pictures? They fit in perfectly!!!

Hmm, as a Czech I would say that today we would be better under russians than european union. Just my personal opinion though...

That's pretty much the story in most eastern Europe.

I honestly can't comment on domestic politics of the Czech Republic, but keep in mind that this story is set several decades in the future and the ECA is -entirely- different from the EU, as detailed in 'Risen from Ruins'.

ECA will have 1 infantry hero in 2.0 or will they have 3 for each general's nationality?

You're confusing us with that other Europe mod that was around ages ago. All Generals get the same hero.

yeah I got that