"It was a red dawn in the November of 2045 when our Manticore tank first arrived at our camp near Swiebodzin, a mere 70 kilometres away from the fatherland. Me and my crew, Berger, Goldmann and Rossi, were watching as the cargo train came to a halt. On it was the largest tank we had ever seen. It seemed even more massive than Ivan's Sentinel. The Manticore was so heavy that the chassis and the turret were actually transported on two seperate freight cars and assembled on-site by a crane. I still remember Berger being very jealous. He used to be our loader back when we were still riding a Leopard but the Manticore's shells were too massive for a man to handle and the entire vehicle was computer-assisted: Navigation, secondary weapons, countermeasures, the auto-loader. Berger really wanted to be on that tank with us but we had to part ways that day. I don't know what happened to him after the Russians took the fight to us. But yeah, I got into the cupola first and booted up the computer or 'EVA' as it called itself; Electronic Voice Assistant. We quickly agreed that we didn't like the voice. It sounded all bitchy and patronising in some passive-aggressive kinda way, so we just called her 'the Ex'. Then Goldmann and Rossi climbed in, commenting on those nifty leather seats and taking in that new tank smell. The folks at KMW really did their homework on this beauty. They even got a few car engineers on the team to design the interior; with a tank like this, it wasn't just about utilitarianism, it was about convenience. You could literally live inside that thing."

"Anyway, we then rolled out to our first assignment: A Russian convoy was making a supply tour through some of the towns and we had to put a stop to that. The Ex suggested an ambush position between a bunch of trees. I didn't see anything suicidally wrong with it, so I ordered Rossi to get us in there. The optics of the Manticore were excellent: I could sit there for hours watching the Russkies go about their business in the nearby village, eating, chatting, doing their thing with no idea that we were waiting right around the corner. Then the convoy was done dropping its supplies and moved on to the next town, its front and rear guarded by a single T-80 respectively. This was our chance. I told Goldmann to engage the tanks first, so that their wreckages would block the other vehicles from escaping. He punched in the targets, then hit the big red button. All we felt was a muffled thud and a gentle shake while the Kodiak in front of the convoy got blown in half. Number two followed within a few seconds. After that, we went to town on those Russians: Trucks, BMPs, men - The Manticore ripped them all to shreds. All I ever got was a bunch of target recommendations popping up on my display and the Ex asking for a confirmation. One button-press later, they all went up in a hail of gunfire and rockets. It was glorious."

"Suddenly, a group of Golem tanks approached us from the flank. We tankers used to hate these things even more than we hated the Sentinels. They were faster, obscenely well armoured and infamous for their flanking attacks. They opened up on us and their shells smashed right into our unprotected side. I still remember Rossi going nuts while he turned our front armour towards them...And then I realised: Rossi -was- turning our front armour towards them; we were -still- alive! We'd just taken three 130mm shells to the guts and the Manticore just shrugged them off like it was nothing! The Ex just blabbered some technobabble crap about how she was 'engaging the nano dispensers' while Goldmann brought all weapons to bear. I like to imagine that these guys were pissing their hazmat-suits in that moment. He took out two of them in a few moments before the third one called it a day and ran home. When we returned to our camp, our comrades cheered at us; it was like a Roman triumph. Even Brigadegeneral Atalay came to congratulate us personally. When I got out to inspect the tank, I saw a few football-sized dents in our side armour where the Golems had hit us but they had been filled out by some hardened grey foam. We didn't really care how exactly that worked, but it sure got the job done. Needless to say, we spent the entire afternoon painting all sorts of kill-marks on our new tank. Not bad for a half day's work." 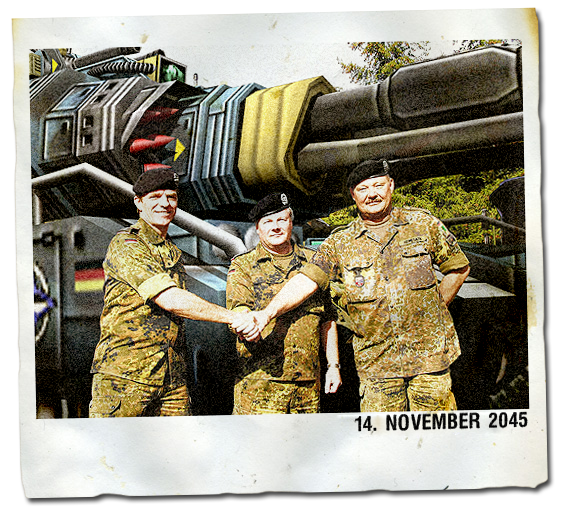 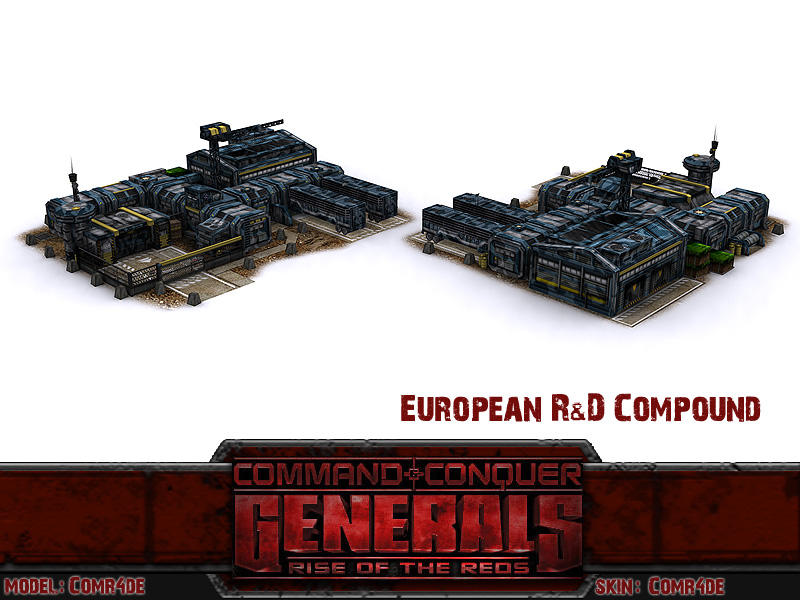 The European Research & Development Compound is a large, complex structure that houses the staff and equipment of various top secret military projects that have only recently been cleared for field testing. The threat of the Russian invasion has forced the ECA to tighten their schedules and send these rare prototypes into combat. Only little is currently known about their exact nature besides sketchy rumours, ranging from a super-heavy 'Manticore' tank over an armoured exo-skeleton dubbed the 'Venom' to what appears to a militarised version of an ESA orbital payload delivery mechanism codenamed 'Pandora'. Due to the complexity of the projects and the scarcity of the necessary materials, ECA commanders can only choose to develop and deploy one of these prototypes. In addition to a very powerful experimental weapon, each project also grants additional benefits. At the same time, the R&D Compound provides the ECA with a number of additional technologies that are somewhat more mundane than the secret prototypes, but nevertheless vital for the advanced stages of a battle. 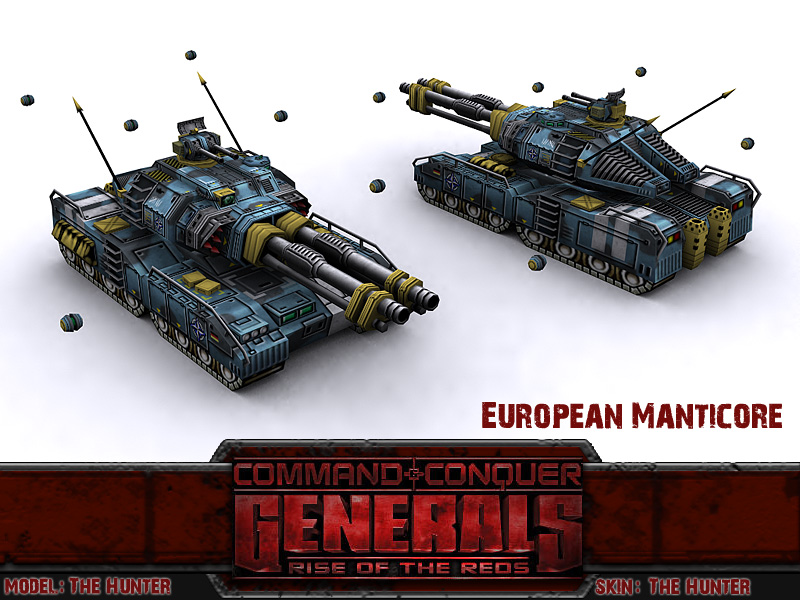 The 100 ton experimental Manticore tank is the most technologically advanced tank in the world. It sports dual 155mm cannons to fend off lesser tanks, a dual 30mm auto-cannon turret to dispatch any infantry and aircraft that venture into its sights and a set of rocket launchers to seal the deal. Deployed relatively early in the war, these rare tanks are usually seen leading entire ECA armor divisions into the fray against their Russian counterparts. The Manticore is infamous for being the only tank that is able to best the Sentinel in a one-on-one duel. This is not due to standard merits such as the plating of its armor or the parameters of its guns but rather because of nanite technology that can repair any damage done to the tank nigh instantly. Several small, orb-shaped bots actively hover around the Manticore and dispense a regenerative, self-hardening nano-foam that quickly solidifies inside any holes in the hull, thus filling out missing chunks of the tank's structure. There are even reported cases of the tank being fully repaired before its enemies could fire their second volley.

The orbs do not only repair their parent vehicle but also any friendly vehicles within range. This makes the Manticore fearsome not only by itself but also in a tandem with friendly units. Once a General has chosen to deploy the Manticore, two new, mutually exclusive upgrades will become available to his other tanks: Nano Shock Absorbers, devices that look like hexagonal panels that increase the armor of ECA vehicles, and Hydrogen Fuel Cells, new 'safe and green' engines that enhance the vehicle's speed. ECA Generals are only authorized to field one Manticore at a time, so utmost care with this beast is necessary. The Manticore is a new ray of hope to the European Continental Army that had seen so many defeats during the Russian onslaught. It's time to turn the tide, General!

A tiny bit of a little problem...what do we do if we are facing this colossus?

I would recommend having more Sentinels than the Manticore's in the field when playing as RF.

For other sides I would recommend using the superpowers, massed combined arms assaults. Retreating as a last resort.

And if that doesn't work? :D

You fall on your knees, and pray.

You stick your head between your legs, and kiss your *** goodbye ;)

u mean the Rus should start spamming Sentinels when the Manticore shows up ?

I think it's more a case of spamming ordinance at it

That why the ECM tank exists silly! Pack two up with a pair of overload and the Manticore is helpless.

It looks kinda goofy due to the low poly nature of the models and the overall style which are both dictated by the game. Needless to say, if this were a different project, we wouldn't be bound by these limitations and composite shops like this would look a bit more natural, but it's the gist that matters in this case.

The entire story portion of this update is pretty much written as a direct tribute to the Tiger Ace campaign.

lol, and i though i was the only one realizing that XD

maybe?
that's like asking if a kronosaurus can eat sharks.

maybe that is russians response to this

the only problem i have is that you could have at least made an HD model to use in the photograph, i understand it would be a waste of time though.

I'm sure it won't be that overpowered :P I mean, the Sentinel is supposed to be the biggest, badass tank in the game, no?

hehe....mantis wont be an issue for me...just combined arms alone will defeat this monster..or even better use my long range units and the Mantis will be as helpless as a baby...unless of course this thing is long range as well?

Will the ECA voices are English or German oder so?