Now that work on Shockwave is beginning to wind down, we're proud to announce that we're resuming work on Rise of the Reds! Expect an update soon. 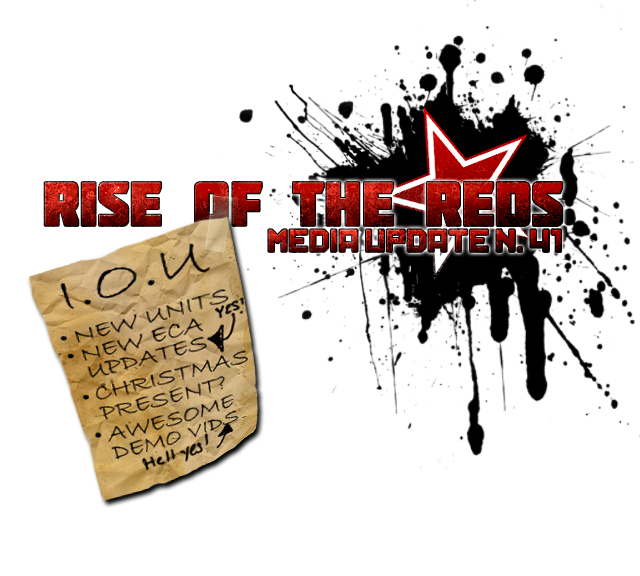 Rise of the Reds #41: Timely Fashion.

Hello ROTR Fans!
It's been well over a year that we have not been able to post an update here; be it via work outside of the mod itself or other projects. In this case our sister mod, Shockwave has just released its final version and we urge you to check it out. Updates will still come in time for Shockwave even now that it has been released; it only means that we will be working on Rise of the Reds once more. We'd also like to thank you for everyones votes for ModDB's mod of the year awards as Top 100! Thank you all

Now for some actual news.

We're happy to say that we're now working on Rise of the Reds once again, and to compliment this we will be re-releasing Rise of the Reds Version 1.5 with better compatibility with Windows Vista/Windows 7 for all those folks still having trouble. Coming out this Christmas. It's a little something but it's something nonetheless.

ECA Development is well underway, we will be revealing this factions infantry and structures in the next update. More teasing because we love it. The wait is almost done gents.

And naturally, you'll see more updates on our end here for Rise of the Reds. We're on our last stretch for ROTR 2.0 - complete with generals and sports over 100 units and upgrades!

Thats all we have for now, so keep tabs on our mod since we'll have as nice update sooner than you think.

See you all next time

What a nice way to end my final-exams filled day. :)

will there be general challenge :D

They are using the Generals Challenge screen to do the Campaigns.

why the heck was my comment down-rated ? O_o... oh well either way looking forward to media updates

Hmm I wonder what those mystery units/buildings are...

this is gonna be awesome!!!

Yeheheeeah! Looking forward to the next update. Keep it up! :)

I can tell this is going to be worth the wait!
Just remember to keep posting regular updates on the mod so we don't get too restless.

Sure is a nice way to tease us, guys, looking forward to seeing the Reds (and the others obviously as well) Rise!

Finally! Comrades, it has been far too long!

Remember gents, we still have to finish SW first.

But yeah, another update on the way.

You mean, like update?
1.0 is the final release of SW right?
Well looking forward to releases anyway, whether it be SW or ROTR!

There working on Shockwave 1.1 now.

No news on the GLA?

This is great news! I'm glad you guys are resuming work on RotR. Currently enjoying Shockwave at the moment. ^^

They never posted a Christmas, not even a new year update for ROTR.

will you ever add AIs for non online?

Yes. You could play the mod offline vs AIs. I like this mod's AIs- particularly in hard mode. It's pretty decent and challenging enough to prepare you for real opponents. ^^

Well, glad to hear that! Btw, since China has recently unveiled its 5th generation stealth fighter, why don't you add this to game? And eliminate Chinese MiGs and may be give EU their Eurofighter Typhoons? Let the Europeans save/have few expensive Eurofighters at their disposal. What do you all think about this idea? Isn't it great? Because as I remember idea of EU having Eurofighters were eliminated from early stage of thegame because of their triangle shape was identical to Chinese MiG 1.44.

Can't wait for the windows 7 compatibility installation! I'll be playin it! Woots

Alright, guys. How long shall we wait?

I think we'll have to wait until Shockwave ver 1.1 was released.

ok now that sw1.1 is out we gunna get a information update or evan a software update?

I'm not sure where to post this but somebody must read this. If you've been watching the while Osama nonsense on the news, I'm sure some of you have heard about the stealth Blackhawk. Need I say more? This unit should only be availible to the Spec Ops general and possibly the Air Force general with modifications.

didnt that crash tho

seriously when are they intend to release it

Yay! Thought it was dead.

This mod my friends...How do I break this, will probably have an update by the time we discover how to travel at the speed of light.