The updates continue as the releases comes closer.

Once again welcome to our next segment of the Race for 1.5. As the release comes nearer we continue to show you the latest updated models and new units we will release along with the newest version of Rise of the Reds. :)

Let's go on to show you some of the latest updates to the Chinese arsenal. 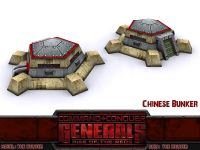 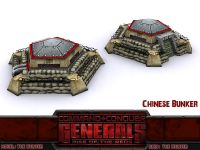 This new line of the standard Chinese bunker that resembles more a turtle than a defensive installation is expected to phase out the older model completely by 2037 while the predecessor will stop being built by 2035. Some Chinese commanders have become very fond of its appearance. It's construction is far more efficient and a mere amount of Red Guard can help in it's construction. 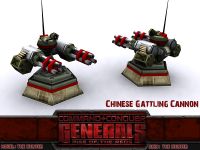 The new generation of China’s lead spewing automated defense turret has been improved with cutting edge electronics becoming one of the most accurate weapon systems ever devised. Infantry, aircraft, vehicles and tanks, they all eventually fall before the never ending barrages. Speculation has come about that these new systems are far superior than the previous models, able to spot hidden infantry faster, some say however that this is merely a false fact since it's brand new and is not actually proven.

Once more, this has been our third segment in our series of updates just before the release, see you tomorrow for the next update.

nice models of the gatling gun and the bunker

Dude, i love the way you have the old styled models, they look awesome!

i want to go to there