Post news RSS Rise of the Reds: Among Jackals Part 2

Brief update with the mod and a continuation of Vladamir's Tank crew story.

Hello once again SWR fans! We're back with another media update for you to feast your eyes on. We also have to announce that due to technical difficulties part 2 of our video feed had to be redone but it's not really a problem since we should have it ready by this week or the next. So don't worry. Now onto the renders: 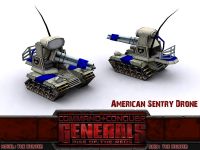 The Sentry Drone comes from a long line of failed prototypes. Billions of dollars were pumped into the development of the perfect scout. The first prototypes produced used to be as expensive as a tank and used to break down often. The second line were cheaper, however they had to be remote controlled by somebody within a hundred miles. The third and final version was cheaper, was capable of accomplishing its mission even without supervision and could operate for over a week without maintenance. Decades have passed, the model we see today is the newest used by US ground operations with electronics and armor more up to date with today’s available technology. 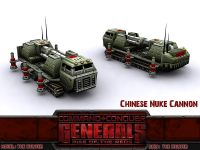 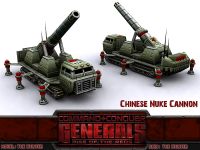 The Nuke Cannon of the new generation is a terrifying opponent. It is now armed with a new ordinance and is capable of a much superior firing range and its destructiveness has increased many times over however it is no longer possesses neutron weaponry since the Budapest Convention of 2027. A bright white light, a shockwave and you are history.
-----

That's all we have for you tonight. We hope you enjoyed the update. As always you can check out our forum or website for exclusive updates on our project as well as converse with the community there. This is the SWR Team signing off!

Damn, crap, blast. I was on the "updates" screen, and I tried to click "Clear" before it loaded this link. But it switched quickly, and it just so happens, the "Report" button is in the same location. So I've accidentally reported your mod, sorry.
(This mod is really really good)

Apart from that, I really like the new Sentry Drone, and I hope the Nuke cannon won't be too OP, I already dislike the Vanilla Nuke Cannon for their range :/

Yea typo we noticed right after we posted it. Sorry for that =P

Yeah and the fact that NO month has 32 days! lol s'okay good for a laugh

nice to know its deadlier, but sad it loses its neutron shell, always loved stealing enemy dozers & tanks using it.

"general, tanks approaching!"
"no worries, they bear OUR symbol."
"then why are they firing?" *BIG EXPLOSION AS FEUL DEPO goes up"