Greetings followers, fans and fellow gamers. Us developers and beta testers have been working tirelessly on getting ROTR into a better shape than before are are close to reaching a point where we want to present it to you all. Leading up to that we will be presenting you with (more) regular updates every week starting from today.

Us developers and beta testers have been working tirelessly on getting ROTR into a better shape than before are are close to reaching a point where we want to present it to you all.

Leading up to that we will be presenting you with (more) regular updates every week starting from today.

With that being said enjoy our latest renders! 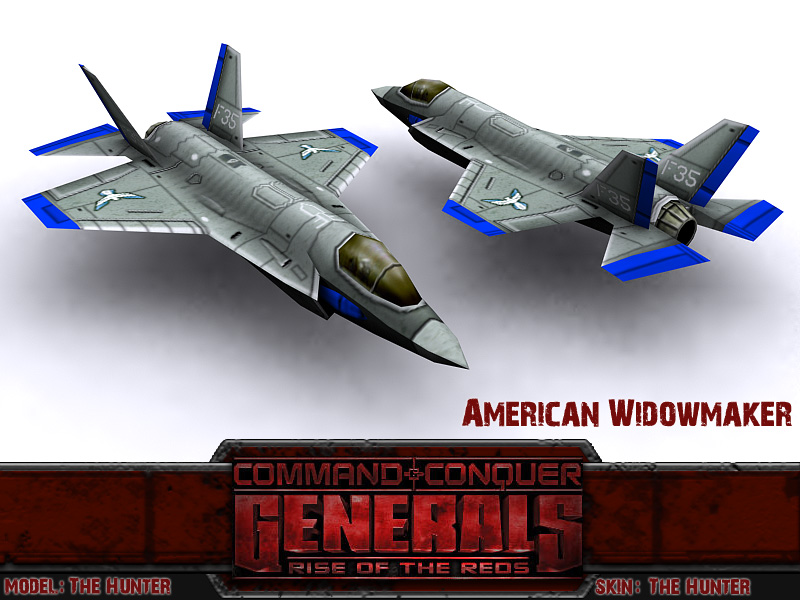 The F-35 is the most widely produced fighter jet of the 21st century, with over 2,000 produced and in use with multiple armed forces worldwide. The A variant serves as the USAF's primary strike fighter, the B variant the US Marine Corps' rapidly deployed stealth fighter from Wasp & America class amphibious assault ships, and the C the US Navy's primary stealth tactical fighter, based from the Nimitz & Ford class supercarriers. US military aviators gave the Lightning II the sarcastic nickname "Widowmaker" due to early (and thankfully false) concerns about the aircraft's survivability in contested airspace and troubled development cycle. Despite a fine service record since then, superseding the F-16 Falcon, AV-8 Harrier, and F/A-18 Hornet, the name stuck. Armed with AIM-120 AMRAAMs and AGM-305 joint air to ground missiles, the Widowmaker can capably engage and destroy any possible target. 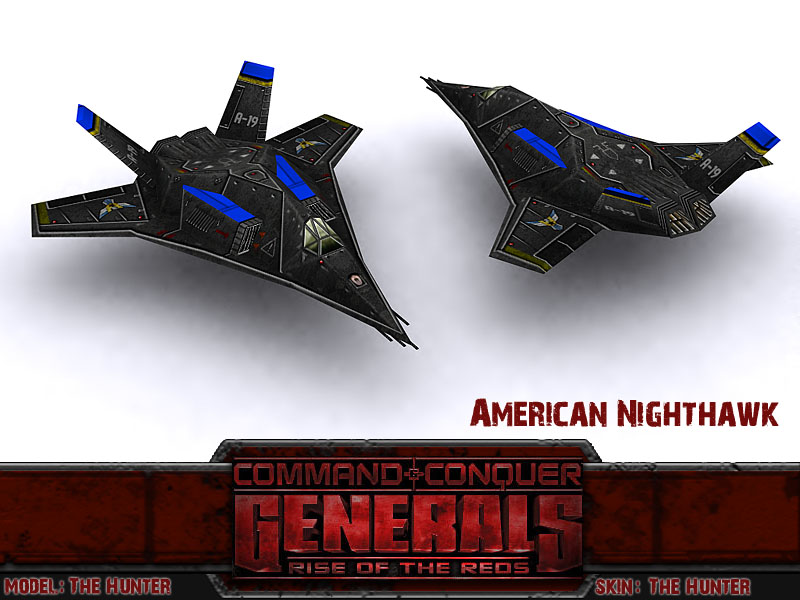 During the period of rearmament of the US Armed Forces in response to a growing global presence of near-peer military adversaries and the threat posed by ever more sophisticated low-frequency radars and tracking systems, the US military requested a design for a new optionally manned strike bomber. The demands were that the new aircraft would be at least as stealthy as Northrop Grumman's B-21 Raider and less expensive than the F/B-40 Aurora, and would be capable for aircraft carrier deployment. Lockheed Martin and Boeing submitted two final designs, a less expensive but slower variant for the US Air Force and a higher speed penetration bomber for the US Navy. The first model was named the A-19 Nighthawk II. Its blended wing body design and advanced jamming devices make it extremely difficult to detect with nearly any radar or infrared system, and the Nighthawk II in both variants is capable of carrying up to the heaviest forms of JDAMs, missiles, and laser-guided munitions. To save costs, both variants of the Nighthawk II use off-the-shelf avionics from the F-35, and the A-19 variant uses high-bypass versions of the F/A-18E's F414 engine. 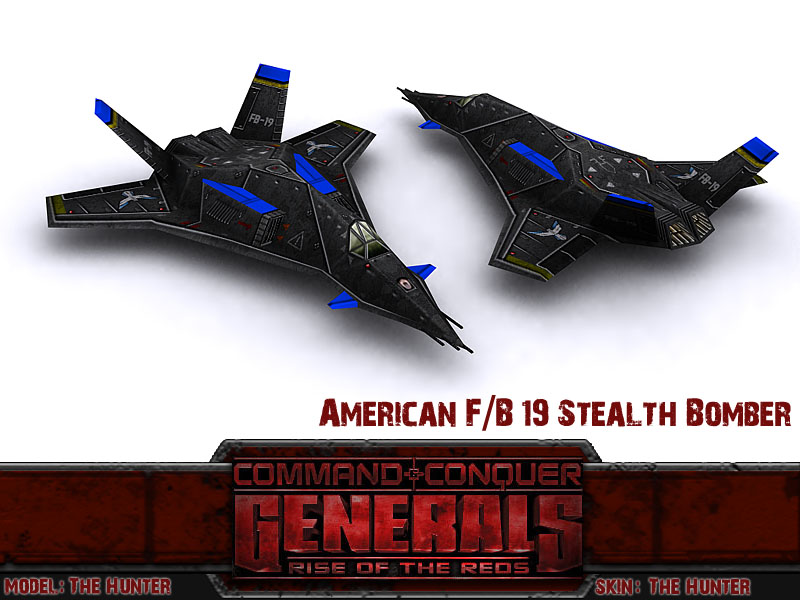 The F/B-19 Nighthawk II is the version used by the US Navy. It is carrier capable and is geared towards high altitude, high speed penetration bombing. To that end, its fuselage is designed for high speed operations and it uses the afterburner-capable versions of the F414 engine. It retains the jamming suite and large weapons bay of the A-19 variant. Given the US Navy's greater usage of drone aircraft, such as Northrop Grumman's MQ-25 Stingray, the F/B-19 is often employed in the AI controlled format for maximum range and flight endurance.

As usual, perfect work guys! I really like the effort here, and good luck to you all. This is just so perfect!

He will be back, don't worry

great to hear that he will be back

no no no no, F-35 is made exactly to replace F-22 and CnC Generals is all about being the best the most realistic strategy ever.
Unless they want to make like 5 fighters then ok.

The f-35 is made to SUPPLEMENT the f-22, not replace it. Check your sources.

@jet02
Among all Secretary of Defense Robert Gates said, paraphrasing him,
the high cost of the aircraft (Lockheed Martin F-22 Raptor), a lack of clear air-to-air missions due to delays in Russian and Chinese fighter programs, a ban on exports, and development of the more versatile F-35 led to the end of F-22 production,
but alright, you may be right.

ALSO can you answer me is Sokol that stealth aircraft Russia and India are working on? Sukhoi/HAL FGFA?

ALSO don't you think Harrier should really be replaced with Eurofighter Typhoon? So much needed i believe.
If they want they can make Panavia Tornado generals powers unlocked strike

The sokol is the in-universe design of the sukhoi t-50 pak-fa.

I've personally asked that question before...unfortunately the answer is "no". The lore states that all forward airbases in europe were annihilated along with most European air assets early during the war, hence the lack of c-tol aircraft in the ECA arsenal. Btw the eurofighter does exist in rotr. As a gp strike plane.

You literally said why, because the F22 is better, so the general focused on planes gets the better plane.

The F-22 is mainly designed as an air superiority fighter, but multirole capable, and less than 200 aircraft have been produced, all of which belong to the US Air Force. The F-35 was designed first and foremost as a multirole aircraft, to replace the F-16, A-10 and Harriers in US service, as well as being exported to a number of other countries. For the US alone, there are plans to procure over 1.700 F-35s, for the Air Force, the Navy and the Marine Corps. As such, the new plan for ROTR actually makes perfect sense: Give the more numerous, multi-branch F-35 to Thorn (Army) and Bradley (Marines) whilst the Air Force General gets the rarer but superior F-22.

even if so, but if in real life the USA Air Force have chosen F-35 and all other branches of the armed forces then so be it, this mod should always just follow the real life and hence add F-35.

BUT you are right as of that F-22 should NOT be excluded from this mod, because of its fifth-generation aircraft fighter!

Can they dodge the Grumble? Can anything?

F-35 has the EXACT same stats as the Raptor you know. Only the model changes.

In clarification: The Widowmaker (F-35) has the same stats as the *CURRENT* Raptor. The *NEW* Raptor which will be given to Griffon will have some bonuses compared to the generic Widowmaker.

Nothing dodges the Grumble. NOTHING

Well the russian fighter can I think. Don't quote me on that though.

Great addition. La me happy to see the mod is still alive. (even though dissapointed by not seeing the download butten)

Ya beautiful bastards you :)

Great mod. Downloaded this last night and had a blast with it, maybe stayed up too long. Oops. Thank you so much for this awesome mod for such an awesome game!

However, I have a question. Anytime I try to launch vanilla ZH, RoTR launches instead. Do I have to uninstall RoTR to play vanilla ZH? What seems to be the problem here? If you could help me that would be awesome!!!

you guys`re just right on time! we`re bout to make America great again..
like my man DT shortens it MAGA i would just like to add the N for Notoriously ..so that would be: "MANGA" ^^

somebody mentioned that the old model of the nighthawk or the 1.0 version looks better,and i tend to agree
but i do like the blue..and dont forget that in RL the us is all up in modernizing its stuff..and i dont think they care to much about the looks of it..
also,if the b-21 in the end looks as a smaller duplicate of the B-2 insead of distinguishable different..than so be it..
speaking of.. would you guys elaborate on if or if not this new baby (wich design may or may not be finalized) makes it`s premiere ingame?

i might not have shown enough enthusiasm..
and eventhough it might be to early for praise since we would like some something new on the ground( we`re greedy..)
i would like to express the emotional ringer i am in..
you ready? aight pay attention
*cough*

serve it up,serve it up, eventhough ya guys stuff still need to be tested
it`s working up an appetite like an awesome amazing breakfast
ooh ooh ooh, oh it looks so delicious *-*
i might never leave the kitchen
GUYS,don`t keep us waiting..we`ll know everything`s gotta be situated.. but we`re ready for it to be initiated...

Well public beta is out, so you probably got what you wished for.

it is! isn`t it (the new nighthawk)
if it would be presented as a new airplane everybody would be in awe
since it replaces the old one, i think it just comes down to what people prefer.
my opinion.. and im a airplane lover.. is that the B-2 B21 X47B and the F-117(nighthawk), looks different than any man made plane.. almost alien. you know,the form and everything
and the new one looks only slightly different..but it looks more like "normal" planes look..thats all

but look at the details! all the white lines and stuff.. NICE gimmick
looks way better than the pale black of the conventional nighthawk
is this recognizable ingame?

Did you solve the problem of freezing with units of more than 4 players on map?

The raptor us probably gonna get a significant stat buff, don't worry.

I guess it will be VTOL .

idk if they are talking about some CnC Generals mod story but F-35 isn't built in more numbers than 200, not 2000.

CHINA AIR FORCE:
we need Chengdu J-20, not PROJECT plane from 2000 1.44 MiG. it was enough of it. China progressed and so should the mod.

They're gonna put that in.

any idea about the release date ? guys you are amazing