This is the alpha 1.1 release of Ricochet: Source. It has fixed many bugs of a1 and now includes all the map models skinned.

After 6 weeks of hard work, I am proud to announce the release of Ricochet: Source a1.1. It was a learning experience for most of us, and the team is satisfied with the result.

We picked the mod off the ground and it has gathered a lot of attention. We even managed to get Lozh back around to chip in, which is great. The current build was put out to fix many bugs in the first release, offer new maps, and have fully skinned models.

If any of you played the original release, you would know of the numerous bugs. For starters, pushing any key besides W, A, S, D, Mouse1, and Mouse2 would crash the game. While fixing it, I decided to leave this bug bound to a key of choice, name Rage Quit, but I decided to remove that. Many exploits in gameplay were fixed by using trigger_push brushes, and expanding the jump triggers so that players could no longer hang out on deflectors or pyramids. The fullbright issue has also been fixed. Many bugs are still out there, and those will be fixed in future releases.

The original release offered very few maps. I mean, playing the same map is only fun for a while. We decided to release with 5 maps. The maps are rc_deathmatch, rc_deathmatch 2, rc_deathmatch3, rc_deathmatch4, and rc_flip_deathmatch. These maps are of various sizes, and can accommodate up to 16 players. 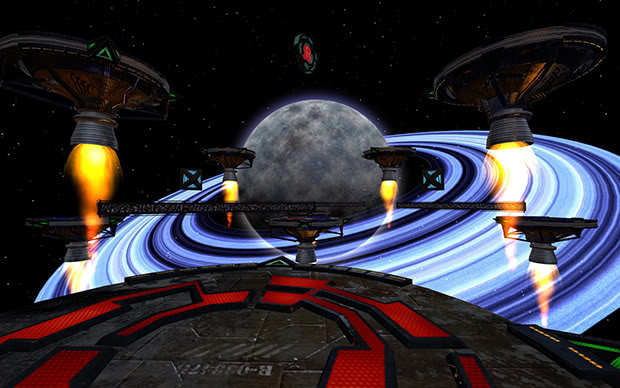 I also decided to include the .vmfs for the 5 maps released so if any mappers want to begin mapping, they can understand how the entities work. Inside the mapsrc folder is a text document that should help you set up our gameconfig inside the sourcesdk bin.

Lastly, the map models have been completed. You might have noticed that the originals had some funny rainbow colors. Well that's because the skin was just the UV map. I have completed all the skins for these models with quality in mind. The pyramids, power up, and deflectors all have some nice features. For starters, the normal maps were all baked from high poly models, adding insane detail to them. Ambient Occlusion maps were added to the diffuse maps, and a specular reflection was added to all of them. It creates a very nice effect, and you can see the normals at work. The deflector model is also new.

So, a lot has been done, and the mod is now in a decent playing state. Obviously, a lot is still at work. Some map models are going to be redone (bricks, teleporters) to be included in future maps introducing new gamemodes. The code will be re-worked to fully overide most of the HL2DM stuff in the GUI, and also finish support for the new gamemodes. Oh, and the Slowdown and Freeze powerups will also be added. Player models will be built from scratch, and animated from scratch using markerless motion capture. New disc models will be created, and even view models so you can see the disc being thrown in first person. New skyboxes will be made to add some variety to the maps. I would say by the spring we will have our last alpha release when all content is finished, and move onto beta.


I would like to thank everyone who worked on the mod from the start, and the new team who has made this possible. I would also like to thank the community for supporting us this whole time. Please download the newest version, delete the older version before installing this one, and spread the word around. Servers should be up soon. Have fun out in the abyss!

oh my god, I love this mod. I used to play it with friends at LAN parties and we couldn't stop laughing.

It's always a fun game to mess around in ,get all your buds to download it. There is a server running currently.

I don't get any with all filters off

Odd, here is the IP for the server that is currently running. You must of just check when it was being updated.

Keep up the good work, hopefully will make a steam release eventually :D

Now you got me interested, iam going to have to see this for myself.

You know...this mod looks like great fun... really suck that no one is ever playing it when I go on...sorta makes it useless...and it's such a fun looking game cuz I loved the original. -sigh-

Im in game right now if anyone wants to join me...

Just played it with someone for a while its pretty fun... couldn't change maps though and the powerups were confusing also it sucks how you keep it after you die... otherwise I loved it it looked great and played like the original... just needs more players and maybe powerup explanations.

If you type "map mapname" in console you can change the map assuming you are hosting the server. Also, if you are playing on cherry's server, just type rtv, and hit escape to vote for a map.

Also, if you want people to play, grab your friends and have them join in. It's a fun way to kill an hour and have a good time.

Dammit! That's the only command I forgot to try... (rtv, that is) haha. I will have to give it a go next time I'm in there. Thanks a bunch.

I was in a game and there was about 6 or 7 of us. Had a great time and just try typing rtv if you want to change the map

Hey, I can't seem to join servers. A message comes up telling me my account "doesn't own this game."

My mistake I didn't have HL2:DM installed. Fixed now.

Weird, my comment got deleted, even though I was praising it...

Regardless, the original was awesome and hope this turns out awesome as well.

I x3 it!
I palyed it on a LAN with ma friend and pwnd him!
But it was an older version and nobody played it :_(
hope now there some players

Finally someone made a Ricothcet SOurce, just cant believe it.
Well of course you got my download! Ranking good.