Here's version 1.1, the second release of The Great War 1918 - a WW1 modification for Company of Heroes.

Flanders Fields (4p)
A map by MonolithicBacon and don_Durandal
This is not really a new map as it has featured in several of our old screenshots and people have often asked to play on it. MonolithicBacon has taken matters into his own hands and made it possible. 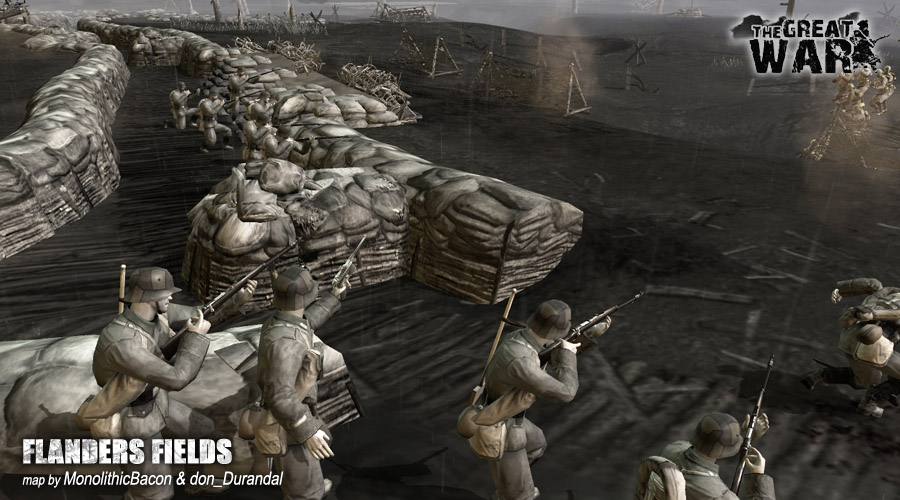 This 4-players map features a muddy no man’s land pockmarked by artillery craters and littered with the debris of years of stalemate. Players start in an extensive trench system complete with combat and communication trenches.
The concept is inspired by an old 2p map by Vietcalm, aptly called “The Great War”. 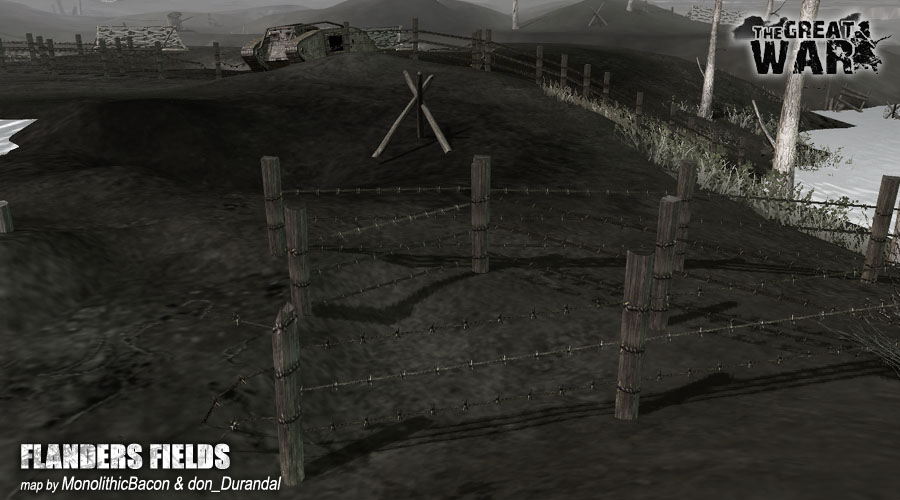 Péronne (4p)
A map by MonolithicBacon
The town of Péronne was recaptured in August 1918 when the Australian Imperial Force stormed the German defence line on the Somme during the Battle of Mont St Quentin. This action was described as the greatest military achievement of the war by British general Henry Rawlinson. 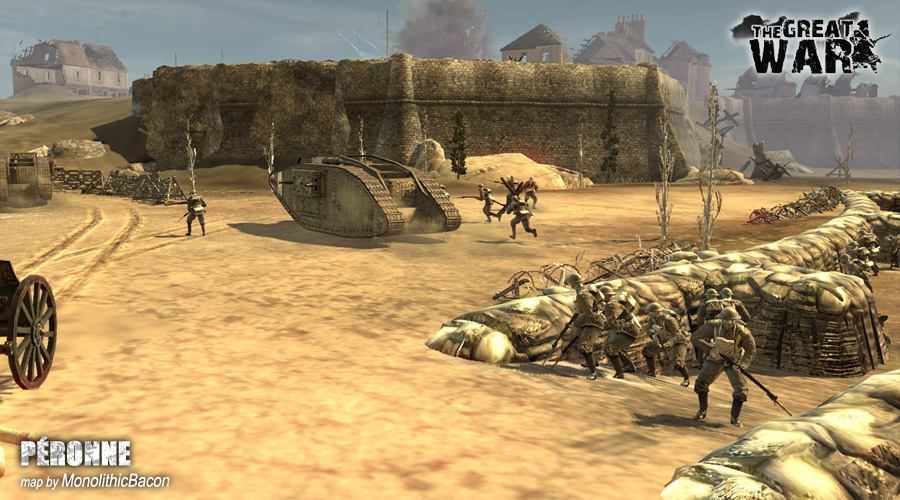 This map is taking a unique approach by introducing the mod’s first urban map, and only half of one at that. The South end of the map introduces sweeping hills of dry, cracked limestone and mud, while the northern end is the ruined town itself. Don't let the buildings fool you, however: trench warfare, even in the streets, is still the aim of the game. 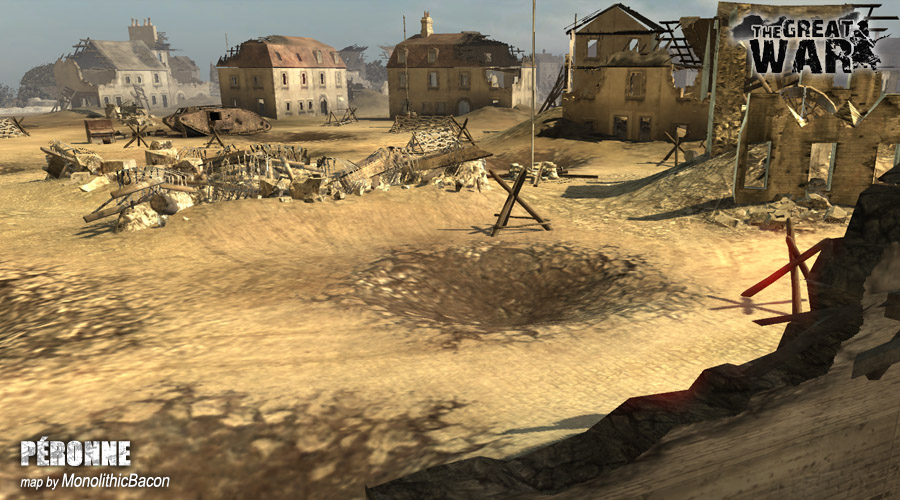 Hawthorn Ridge Redoubt (4p)
A map by MonolithicBacon
This is a map based around the initial crater caused by the Hawthorn Ridge Mine (Over 100tonnes of explosives), opening the floodgates for the Battle of the Somme. Muddy, wet and steeped with natural obstacles, this takes the "original" idea of a trench map and turns it on its side. As the rush for the ridge let to an attack on German lines, all of the trenches present on this map can be more of a hindrance than a help, and players will have to choose where to defend wisely. 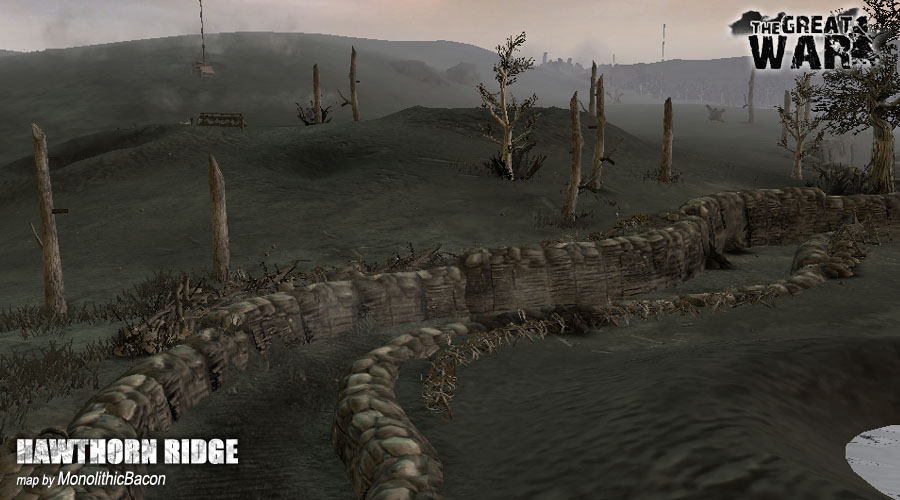 Fahrpanzer
Model and texture by Krätzer, animation by don_Durandal
The Gruson “Fahrbare Panzerlafette” is an armoured turret armed by a 360° revolving 5.3cm quick-fire gun. It was originally designed to be used in fortress emplacements, with rails to drive it into shelter when not in use. With the Western Front set in Belgium and northern France, away from German pre-war fortifications, the Fahrpanzer saw a new use in the trenches.
The Fahrpanzer can be built as a defensive emplacement by German players who chose the “Defence in depth” commander tree. It replaces the former “Drachen observation balloon” research and ability. 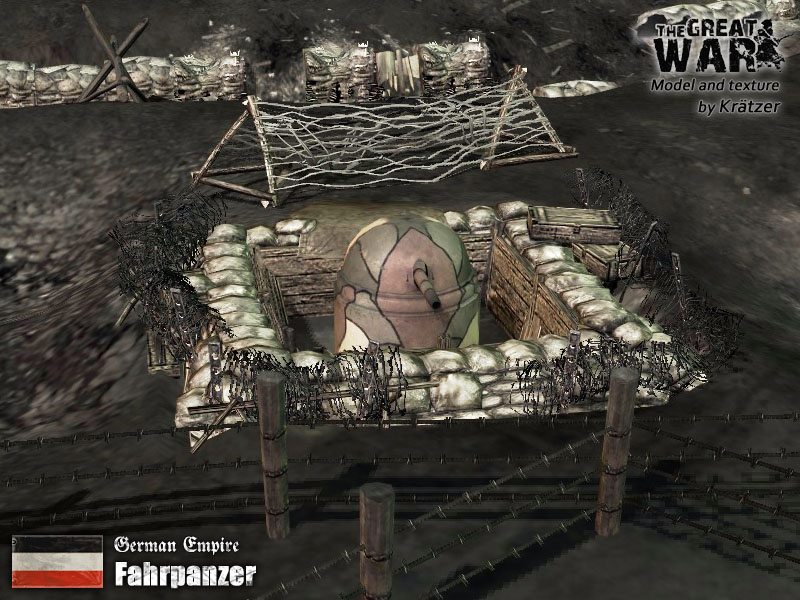 Piper
Bagpipe model by Relic, animation by don_Durandal
WW1 was the last war where bagpipes were used in combat in any significant number. The courage of pipers in leading their unit over the top saw them suffer heavy losses and never again did the British Army allow pipers in combat (although a couple of strong-headed commanders disregarded this order since then, but this story is for others to tell).
The piper is a unique unit recruitable at the company command post. It is available to all reward choice since we decided that uniform choice should never impact gameplay.
Note that the bagpipe’s playing can be buggy at times. The lack of sound tools and the specific circumstances of having a melody played by a unit (instead of random looping sounds) means that the soundtrack is not entirely reliable at this point; this is however the only way this could have worked. Had we kept the music as a single track (instead of small parts) it would have kept playing even if the piper died as the game engine is unable to interrupt sounds once they start playing. 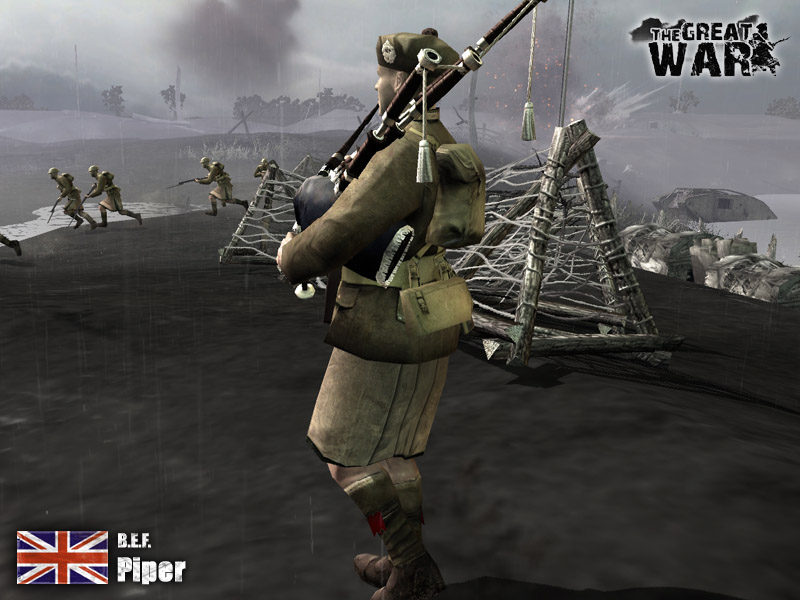 Sappenpanzer
Model and texture by don_Durandal
The Sappenpanzer was an early attempt at giving soldiers body protection against shrapnel and fragments. It was tested in 1916 but proved too heavy and cumbersome to be used by anyone but soldiers in static positions, like sentries and machine gunners. Only the steel helmet survived the trial (although without the bulletproof forehead armour plate) replacing the outdated leather and brass Pickelhaube with its conspicuous spike in all frontline units in the course of 1916.
The Sappenpanzer is an upgrade for Landser groups. It increases their survivability against shrapnel and fragmentation weapons, such as grenades. It comes at the cost of lower mobility though. 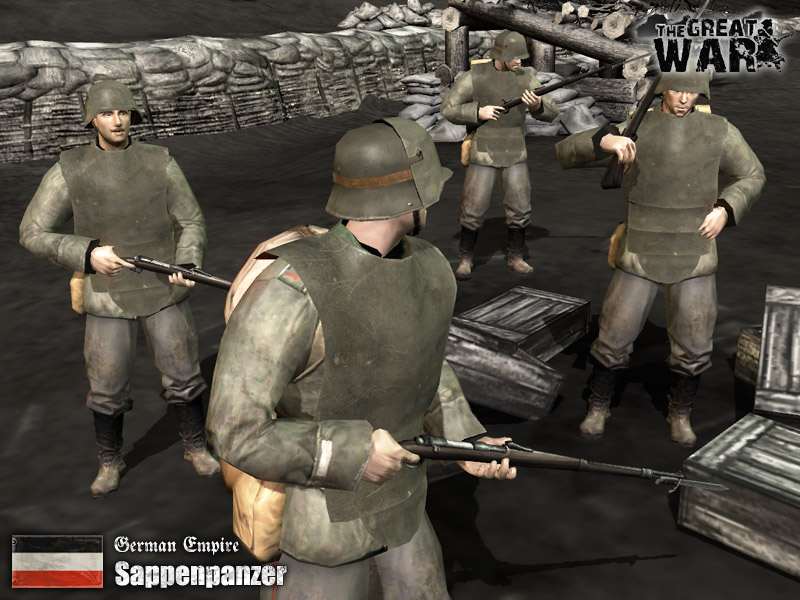 …and of course
Balance Changes!

- Janne252, who made our trench-spawning code, has come up with a new code for poison gas weapons. Units wearing gas masks will now be unable to use some of their abilities, making green cross / whitestar and yellow cross a bigger hindrance.
- Descriptions have been updated to better reflect the functionality of all upgrades and abilities.
- reduced the upkeep cost of all tanks and artillery.
- Rifle Grenades have had their damage lowered.
- Field guns can shoot above trenches.
- increased the rotation speed of all Field Guns.
- increased the health of all field guns.
- lowered the accuracy of male tank guns vs. field guns.
- increased the accuracy of all field guns.
- lowered the reload duration penalty of field guns when firing at long range.
- raised the cap on snipers to 3.
- increased the radius and proc rate of Blue Cross / KSK.
- Landser groups, stormtroopers, 08/15 teams, MG Sharpshooters and infantry sections can use "hold position" when in cover.
- the observation ability of Platoon Leaders and Command sections now lasts 30 seconds. The uncloaking effect of enemy units still only last 5 seconds.
- fixed the range of re-crewed howitzers.

- The assault pioniers' concealing smoke ability no longer grants invisibility.
- added a visible cone of fire to the Minenwerfer.
- raised the movement speed of the Minenwerfer.
- The Minenwerfer properly requires tier 2.
- increased the A7V's mobility.
- The A7V can use "stop tank".
- increased the accuracy of the A7V's side machineguns.
- Trench requirements have been lowered to tier 1.
- The 08/15 LMG team's "Vision Slits Aim" (button enemy vhc) no longer requires veterancy.
- The "Hindenburg Line" doctrine will allow strongpoints with the "aid station" upgrade to heal surrounding infantry.
- decreased the cost of the strongpoint's upgrades to 40 munitions.
- lowered the cost of the "2nd line rush" commander ability to 35 munitions.
- lowered the cost of the "Drumfire" commander ability to 200 ammunition.
- Pioniers can now repair vehicle by default, although at half the rate of those with the "Maintenance Crew" upgrade.
- Pioniers with the maintenance crew upgrade take x1.5 damage when repairing instead of x3.
- The pioniers’ "demolitions" and "maintenance crew" upgrades are now exclusive. They no longer have a cost, but require researches found in the tier 1 building.
- Specialised pioniers and assault pioniers can throw light anti-tank mines.
- Increased the suppression caused by the MG08 in the starting bunker and upgraded strongpoints.
- increased the accuracy of the Mauser AT rifle vs. tanks.
- Concentrated charges (bundled grenades) will "stick" when used on tanks. They can now only be used on buildings and tanks.
- replaced the stormtroopers' "throw egg grenade" ability with assault.
- Landsers start with soldier armour.
- Landsers can be upgraded with Sappenpanzer (shrapnel armour).
- The “Drachen observation balloon” commander upgrade and ability has been replaced with the Fahrpanzer emplacement.
- The rally point marker can now be selected in the UI.
- The rally point marker will now last until manually removed. An ability has been added to dismiss the rally point.
- The Field Liaison Post no longer requires the Company Depot.
- increased the health degeneration caused by Yellow Cross gas.
- The Platoon Leader's abilities have a shared timer of 30s now.
- the Platoon Leader's Forced March ability can no longer stack with the movement bonus from the Officer's All-Out-Assault ability.

- A piper unit has been added to the Company Command post.
- AT grenades now require an ammo dump upgrade. The bomber upgrade is no longer required.
- crawling will be deactivated when trench raiders retreat.
- lowered the cost of the Strafing Run to 50 ammunition.
- lowered the experience bonus of the "Feedback" upgrade in the Assault Infantry commander tree.
- The command section's observation ability is now properly visible.
- The command section's observed barrage ability now requires a "trench maps" upgrade at the ammo dump.
- Howitzers' creeping barrage ability requires the "trench maps" upgrade.
- increased the suppression caused by the Vickers MG in the starting pillbox, MG emplacements and MG teams.
- The Whippet starts with a frontal MG only. The side MGs need to be upgraded.
- The cost of Trench Raiders has been lowered to 220 manpower.
- Platoon outposts will now be indicated on the tactical map.
- The "RE Field Company" commander upgrade now also decreases the reinforcement cost of RE field sections. New sections will start with 6 men.
- The "RE Field Company" commander upgrade no longer unlocks mills bombs for RE Field Sections.

also does the bagpiper actually affect gameplay or is it purely cosmetic/for humour? either way it's a great addition.

He actually does give bonuses to nearby Infantry. ;)

Awesome... I already love the 1.0 version, but with this update im sure this will bring more joy to the game.... Thanks a lot :D

It doesn't work for me on 2.700, hangs up on firefight menu.
Is 1.1 Full or incremental that might mean something.

It's a full standalone version.

What do you mean by "hang up"? And di you mean in the skirmsih lobby?
Also what CoH games do you have (vCoH, OF, ToV)? Do you have any other mods installed?

Finally, make sure everything is installed correctly: Tgw1918.dailyforum.net

Well yeah fully steamed up Relaunch, had TGW 1.0 on the normal 2.602 working without problems. now whenever I try skirmish against AI it hangs up for some time and then tells me that something failed to set up a game, so I don't even get the chance to select something or hang up on loading a mission.
vCoH, OF and ToV are all properly installed.
Mods on the Relaunch are BKMod, BotB, EAW, MC and Cheatmod all in its last outings

I get all the necessary files in the Relaunch Category without problems anything I expect from TGW is there.

Seems like it's a general error, dunno why but on any game or mod it just says it cannot establish the skirmish game.

Just let steam make an integrity check and it found 4 files that require replacing, maybe something spoiled the skirmish files. Very unfortunate not to know whats the reason.

Okay now that it replaced the 4 files it seems to work again, removed EAW just because I installed it last and gotta make sure the speech files aren't a problem, having english speak english and german speak german should be no problem tho.

Thats what we wanted to see! Great update!

So do i have to uninstall the other version before installing this one?

No. It will overwrite all relevant files.

Well to be sure you could delete the old files manually, provided you know which ones. But that shouldn't be necessary.

When will this update be able to download from moddb?

PiPer! Its been a while since total war than a guy arm with a musical instrument emerge on the Battlefield.

I have now read all the changes. They sound very good. Great to see!

Also I like how you decided to add the sappen panzer. I know historical accuracy is important.

If it is used too much for offensive, maybe add a penalty to them when fighting in neutral and enemy territory.

Still hoping for infantry only to come out. Besides that, awesome update!