Now that you've seen the two Chinese Recycler variants, we also want to show you the modifications that stolen Chinese tech can apply to other GLA units.

Now that you've seen the two Chinese Recycler variants, we also want to show you the modifications that stolen Chinese tech can apply to other GLA units:

Salvaging a crate from a Chinese Tier 1 vehicle allows you to add a napalm component to the following units: 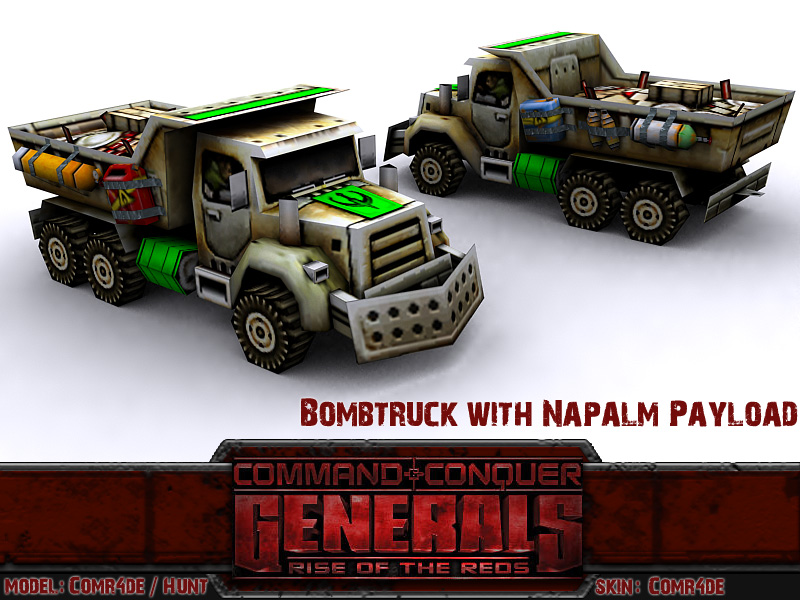 First, we have the Bomb Truck which receives a pretty big napalm payload capable of creating a firestorm upon detonation.

Note that it does -not- override its previous payload and can be combined with either a biological or high-explosive bomb. 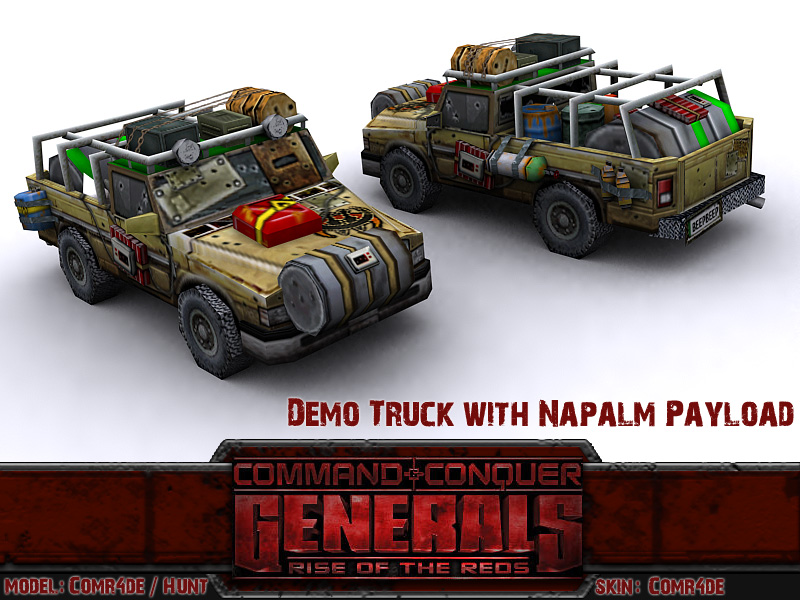 Second is the Demo Truck which does not create a firestorm on impact but still a sizable incendiary blast when it goes off. 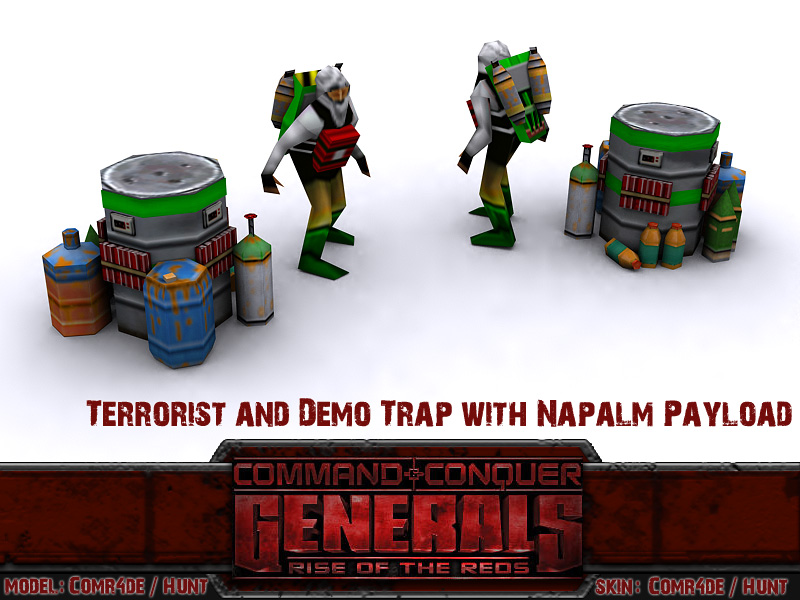 Last but certainly not least in this category, the Terrorist and the Demo Trap.
The Demo Traps will also create a firestorm on detonation like the Bomb Truck whereas Terrorists, like the Demo Truck, simply get a nice additional napalm fire explosion added to their standard effect.

Salvaging a crate from a Chinese Tier 2 vehicle allows you to install jury rigged nuclear engines on the following vehicles: 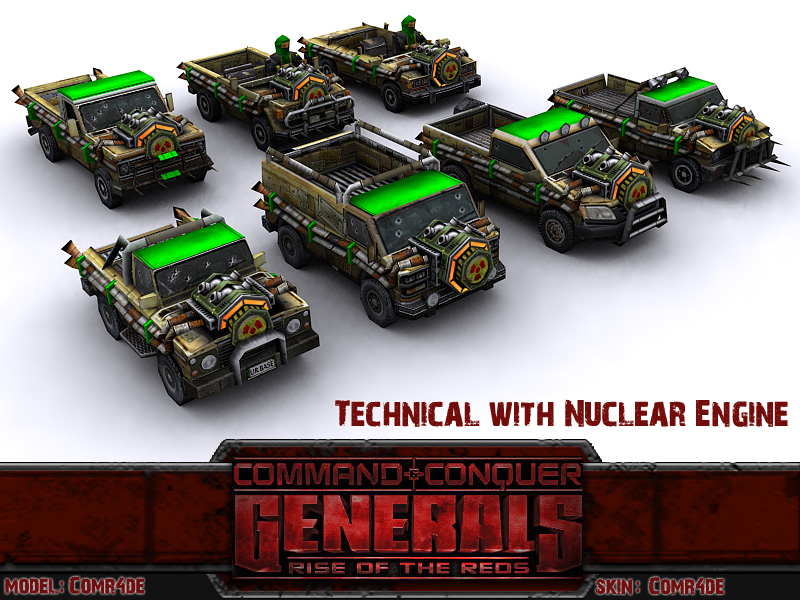 First, the Technical, which gains a massive speed increase from their new nuclear engines which will however also make them create a minor explosion and radiation field on destruction.
For some added comedic value we also made them do fancy wheelies whenever they accelerate with their new engines. 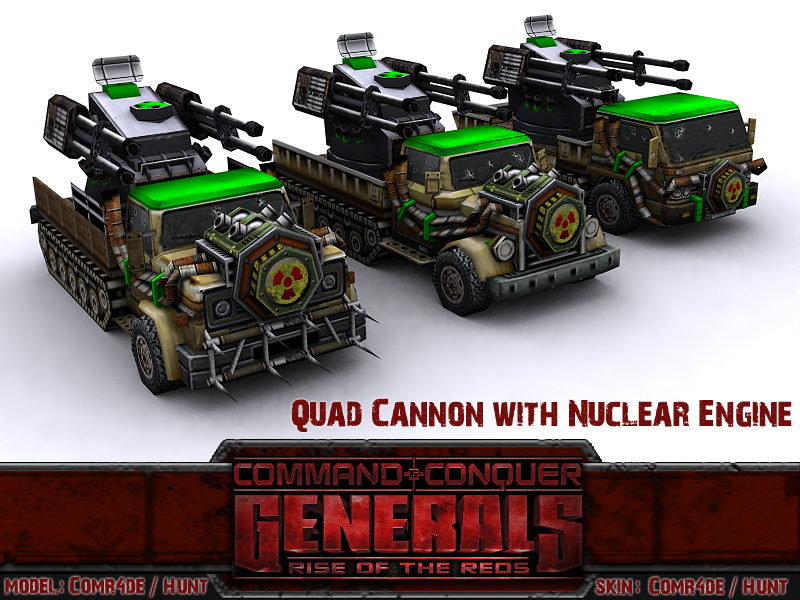 Second is the Quad Cannon which can also get nuclear engines to boost its speed but just as the Technicals, it will create a minor explosion and radiation field when destroyed. 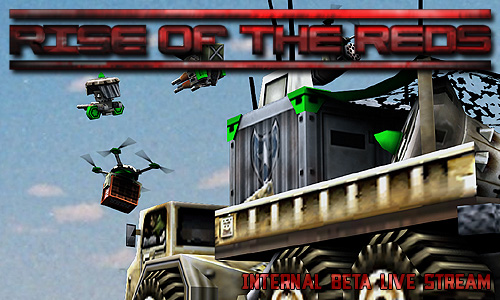 I'm not sure I like the new salvaging stuff. I liked it when it upgraded weapons and all that, but this is... weird. Maybe a bit overkill?

I don't know, I haven't played it yet!

The old salvage stuff is still there don't worry.
this simply adds an extra layer on the cake so to say :)

Though now I have to be fearful of suicide-everything. x3

The basic idea is that you can now get an extra/alternate use out of the salvage: You can do a little micro to recover crates from T1/T2 vehicles with the Recycler to get these special upgrades OR you can still simply have your regular vehicles drive over said crates as before to receive an instant upgrade to their default weapon. It is very useful, but designed to be optional - nothing is taken away from the old system.

a bit confused to how the demo-traps get the upgrades thought its a building?

would be nice if someone explained it to me.

It's a target skill like Boris' building laser marker.

HOW HAVE YOU GUYS NOT BROKEN THE SAGE ENGINE YET

Jesus.. I can't imagine what 2.0 is gonna look like lol

this is the true Zero Hour sequel

keep up the fantastic work you guys

Will the upgrades affect the entire unit type(s) or only some individual units (buildings, in the case of the demo trap) in a certain area at the time of upgrading?

Haven't seen the streams for the past few months :( ISP problems and all that, and nobody has any idea when or if it'll get better -_-

These upgrades are individual, which is to say, recovering the Chinese salvage does -not- outfit all of these units with the respective upgrades automatically. It -allows- you to add these upgrades to individual units, likely for a price. This is because multiple upgrades will affect the same units, so you still have a choice between them.

Alright, thanks for clearing that up! :)

ISP problems are everywhere, and you have to work around them no matter what..

will the mod be completed before 2015 ends?

Little tidbit I just have to ask: Upgrading units with these still lets you pick up regular crates, right?
Because it almost sounds like a whole lot of extra models, even if they're pretty same-y.

You still receive an instant, free-of-charge weapon upgrade if you drive your Technicals, Scorpions, Marauders, etc. over any scrap crate, regardless of the Recycler-related upgrades you've already applied to said unit. That means that most GLA vehicles can benefit from a.) global upgrades like Junk Repair b.) classic salvage upgrades c.) veterancy and d.) Recycler salvage upgrades.

We feel that this actually makes them more representative of their intended guerilla theme, i.e. you start out with basic units that you either use for hit-and-run tactics or as meatshields but if you keep them alive long enough to benefit from all these improvements, you can build up a nucleus of highly powerful units that you could use for a decisive attack in the later stage of the game; a sort of transformation in how you use a unit as it becomes better over time.

Well, in that case: SQVEEEEEE!™ This might even be kinda fun to play as!

Wait for it to actually get released,then scream like a little girl when it does....

Comedic value, you say? Count me in!