So there is some new things a foot, and after we are done with this little bit of editing, we will be sure to get a release out, with the current coding as is, for everyone to play with and tell us what you think.

So this is a 'little' update. I have received a load of maps created by Patrick-xl, and will be incorporating them into the mod for the next release. But that is not the only new thing that we have. Along with working on some new models, like a Titan Yard among other things for the Goa'uld, we have recently received permission to use the Infinite Spaces mod planets in SGI, and I will be incorporating them for the next release. 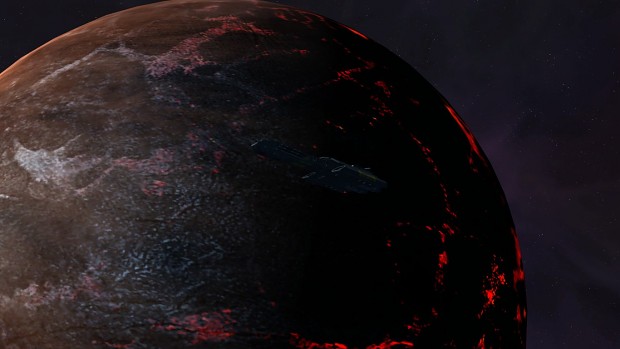 Speaking of the next release, as soon as the coding is done for these new planets, as well as a few more models are imported, I will be proceeding with scaling the model files down by 60%, so that the scale is more realistic, and a Daedalus isn't the size of Mexico. What does this mean for you our faithful followers? Well it means that the next release you will be playing will not only be scaled correctly, have amazing looking planets, but will also include the Goa'uld, and the Asgard.

Currently nothing has been done with the research trees for both these races, but we will be incorporating at least the Goa'uld Titans for the release. I also hope to have another capital ship for the Goa'uld done by then as well.

That is all for now, have a good time.

I LOVE THE ASGARD

:0 I did not expect the extra races, GOOD WORK! Will the Aurora-Class be textured nicely?

does it mean that you wont release all the titans in the next release?

You should also nerf the asgard beam, because i played multiplayer with my friend, i had like 10 wraith hives with 25k hp+, and he just spam daedalus ships with asgard beam. No chance he had like 60 daedalus with asgard beam (2000 damage) pls nerf that dmg :(, but VERY GOOD MOD!!

maybe not nerf the weapon; as in the series it is that good. but instead limit the daedalus class ships so a person can't spam tham like that. maybe limit to like 12-15 at a time

Maybe if it has like 5 min cool down, it would be better if the ships just destroy 1 ship per battle :) i just played agains pirates with friend who has like 500 hours+ in this game and for troll i sent pirates on him, and evil asgards just removed his fleet for sure :D lolololol DAT ASGARD BEEMS

The Asgard beam weapons are to be honest, amazingly over powered,however, so are other abilities. Take drone frenzy for example, one Aurora can take out a 6 ships in one strike. Perhaps you should add conditions, like making plasma beam weapons effective against hull and not as much against shields. We saw that it takes several shots to down an Ori ship and Asuran Auroras stood up to several blasts when they had their shields up. The beam weapons didn't do **** to the super hive. In conclusion, don't decrease damage, but improve the resistances of certain other ships, it could even add more effective counters and research options to minimize damage from certain weapon types.

superhive either needs a nerf or be made into a titan.:)

I am Lord Sokar and I approve this message.

This is going to be amazing

I just wanted to say the work that went into this is astounding. Everyone who worked on this and it's associated parts should be proud.