After about a month of work from the first release, the second massive update to the Original Trilogy mod is released.

First off some screenshots to showcase some new ships, battles, and features: 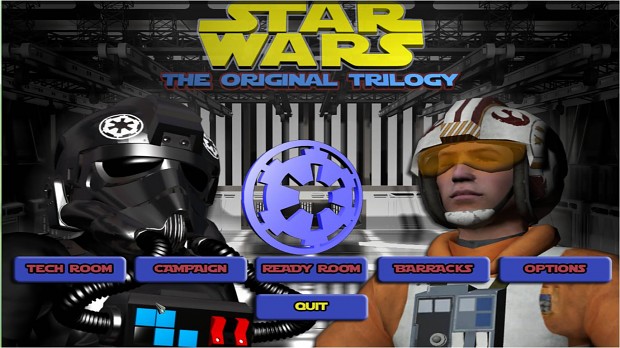 Image of the new and much improved mainhall. 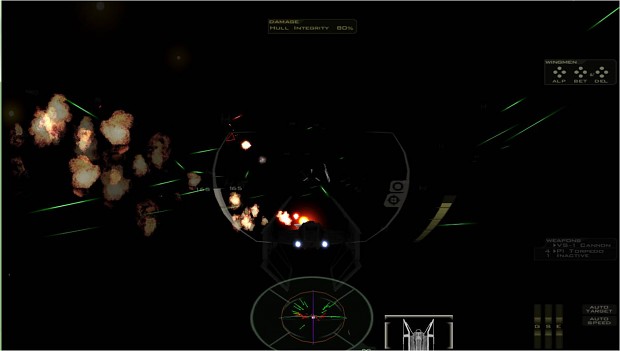 Here is the TIE Avenger in game, blasting some rebel scum. 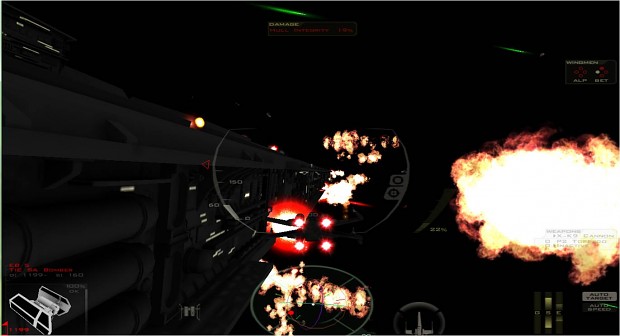 An X-Wing strafing run against an Imperial Star Destroyer.

This large update concentrates on totally revamping and correcting the turret systems for the large ships, supplying a large visual upgrade for the laser effects, adding lots of new ships and models, providing some much needed balance issues, lots of bug and others fixes, adding new ships, community created missions, and of course a massive slew of corrections and additions.

- Included 7 new, mostly community created, missions, though none are completely finished except the one from Hobbie.
- Fixed some models' dock points so Hobbie custom's mission could work properly.
- Upgraded visual laser and thrusters effects, credits to DaBrain.
- Added new models for all secondary weapons thanks to Galemp.
- Added seismic charge secondary weapon.
- Revamped and flushed out the entire turret system of all large ships. Added many more lines and flags to the turret tables and AI tables to alter names, behaviour, and firing style.
-Modified and corrected large ship gun placements and balanced the number of gun types each large ship had.
- Toned down maximum ranges for weapons and adjusted for larger ship turrets, i.e. now the largest turrets have the longest ranges.
- Added low polygon Millennium Falcon, Assault Gunboat, TIE Avenger, and Super Star Destroyer Executor and high poly Escape Pod, multiple satellites, and Outer Rim Hyperspace Buoy.
- Added new and higher quality Mainhall, thanks to cofeesoft.
- Added AG-2G Quad Laser Cannon for Millennium Falcon.
- Added AI profile for the Assault Gunboat and TIE Avenger.
- Fixed dual firing torpedo bug. Before it would only fire one, not both.
- Added flyable Corvette with configurable Cap-ship Command Script.
- Added X-Wing textures with gold, green and grey flight colors.
- Added the Container Type A based on the Bulk Freighter.
- Added optional cockpits with a addon .tbm file. These are taken from Steve-O fighters (Uriel, Wraith, etc...).
- Added Death Star 2 as a usable background.
- Fixed muzzle flash colors and thruster colors and adjusted thruster sizes. Also added thrusters to the Z-95 Headhunter and Imperial Shuttle.
- Included a custom star-field courtesy of MetalDestoyer.
- Fixed a bug causing the Mon Calamari Cruisers to not work.
- Changed the minimum distance for weapons so the AI would stop running into the player.
- Fixed the incorrect value for the Y-Wing autoaim field; it was 0, now it is 5.
- Removed explosions from Ion Cannon impacts.
- Tweaked Proton Torpedo values to be more damaging but have a shorter range.
- Fixed bug where AI will not use the right primaries and secondaries.
- Fixed sound bug where getting hit did not make any sound.
- Adjusted bounce value so it is not as extreme.
- Slowed X-wing and TIE Interceptor fire rate, tweaked the Y-wing laser settings, and slightly slowed energy drain on most weapons.
- Adjusted shield and hull strengths and speeds to give a slightly wider separation between Z95, X-wing, and Y-wing.
- Added auto convergence to TIE Bomber and Fighter to correct for player firing difficulties.
- Incorporate Auxiliary A-wing guns.
- Added very minute thruster points for the TIE Fighter, Interceptor, and Avenger and adjusted thruster locations and sizes on other ships.
- Adjusted damage spews on larger ships.
- Adjusted POS of ships.-Fixed incorrect icons on some ships.
- Made some sounds like shield transfer and fly bys slightly louder.
- Added a long shield manage delay to larger ships, thus more strategy can me used in destroying one.
- Changed large ship weapons firing rates.
- Make general Empire and Rebel AI to account for ship changes at the start of missions.
- Updated credits.
- Fixed spellings in many places.
- Incorporated both Imperial and Alliance symbols into the spinning animation in the Mainhall.
- Removed unused files.

Future Work:
Now that the mod is overall well balanced and stable the energy, time and priority now shifts to making missions, so stay tuned for updates regrading missions and new content! Also, if anyone wants to join the team or contribute something we are always open to new content additions.

Hmmm, did it say ERANGE? If you click OK it will still run the game. But I think I isolated what was causing it and will fix it soon.

This application has requested the Runtime to terminate it in an unusual way.
Please contact application's support team for more information."

That's what it says. Any ideas?

And this isn't the only mod this has happened on. It's happened to several other ones. I just don't get it.

Hmmm, you may need to install some other C++ redistributables, check this forum for what you need to get FSO to properly work: Hard-light.net.

Sorry but, I already have all this stuff. Any other ideas?

Unfortunately I am not very knowledgeable about error messages, but I would suggests posting the error in the forum of the link I gave you or in the modding section of the forum.

Ok I'll do that, thank you!

No problem, hope it pans out!