You can't see the expression of stunned joy on our faces, but you can read the thank you note to PC Gamer and Obsidian Entertainment for recognizing our Work in Progress Here. 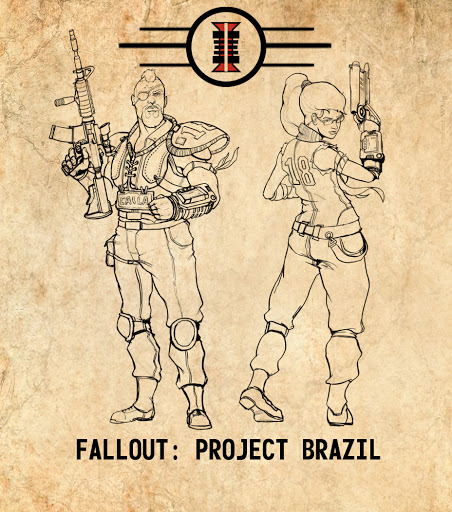 So, if you follow @Radian-Helix Media, the Media company that Thaiauxn (Brandan Lee) runs, you know that we recently got picked up for a job doing an animated 2D & 3D intro sequence for a pretty serious motion picture out in Hollywood, CA. If you follow @Fallout: Project Brazil, you know that we were featured in an article by PC Gamer & were given the thumbs up from Obsidian Entertainment's Facebook & Twitter. Not a bad way to start 2013. 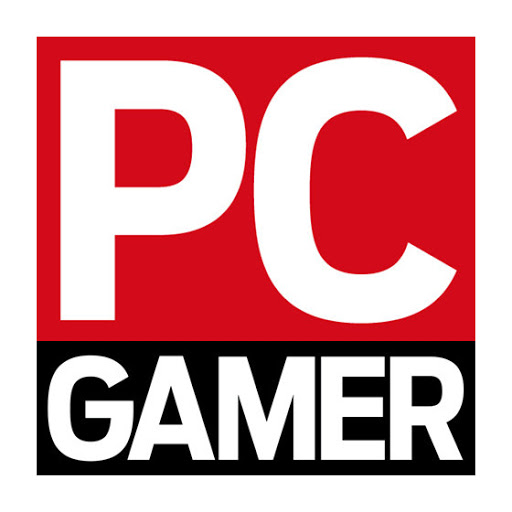 Getting an article on any gaming website is a pretty serious deal for a Modification. Getting it on one of the industry's biggest before you release, is another. Omri Petitte wrote this pretty much out of the blue, and posted it on January 11th. That afternoon, Thomas, Josh, and I, went from working on this 2D animation, to checking our email to send a revision on a castle design (the 6th draft,) and realized it was spontaneously flooded with messages and youtube updates from the previous few hours. We deleted those 30 messages and moved on.

We didn't actually break from the day until almost 2 AM, when our friend Scott sent Radian-Helix members on facebook a note saying, "hey, check this out!"

By then our email was pitch black. 300 messages in one day. I wasn't sure if we won the lottery or if something tragibad happened. You know, as the internet tends to do to us from time to time.

Then we realized that the internet had something far more uplifting in store for us. Something awesome.

Right after we got that bit of news and said, "Dude bro, that's awesome," Obsidian reposted the article on their twitter and Facebook.

If you want to know what it feels like to have a heart attack, see your 3 year long pet-project posted besides Project Eternity, one of PC Gaming's most amazing new developments in recent years - a project that along with Star Citizen and Wasteland 2 is raising a fist in the air for PC Gamers and crowd funded investment, holding the light against the dark tide of fleeing investors and DRM riddled console gaming and mobile phone apps.

The 2nd highest grossing kickstarter project of all time, and your project you made with a guy on the internet in your spare time, on the same news feed from a AAA company you point to when you say, "I wanna be them when I grow up..." *dies*

Every new startup has those moments where you stare at a blank bank account and the years of struggle setting up a new business ahead of you, where you look at your best mates in their dad's living room and admit, "I don't know how the hell this is going to work out, but damned if we don't fight til we make it." Then you get recognition from one of your idols, some of the very people that inspired you to pursue this career - guys that when you played pretend with your friends growing up, you played in their universe and it shaped your goals and aspirations as an artist.

That helps you reaffirm that no matter what bullshit life throws at you, you're going to make it work. You have obligations to your fans now. You've got priorities set. You have standards to meet. You have to get up in the morning, practice what it is you do until you get it right the first time, and go to bed late getting it done. That's just how it is moving forward. nothing has changed, but now you have a fight song playing and the perk "Heroic Will" + 2 to END.

So, to anyone from PC Gaming that reads this, thank you, guys, seriously. We're going to do our best to live up to it.

We got a ton of messages from a few talented GECK modders, and hopefully their volunteer hours will help us get that much extra polish. It's just great to feel like RickerHK & I aren't alone in this anymore. XD

To Obsidian, again, thank you. It means the world to us. We'll make sure it counts.

Another great article from one of our favourite names for a website.

Another popular site for gaming news posting one of our images and a short article.

You can google search Fallout: Project Brazil to find more articles, and help sread the gospel of Terry Gilliam's 1985 film being the reason why it's called Project Brazil. That, and the giant military complex that's part of the plot. (spoilers.)

In unrelated bits, some of the comments in our video feed have been a little harsh (and yes, I read them all and take them seriously,) so we're probably going to go ahead and revisit the material in the Intro Video after we get back from this LA trip. It was already on the list, but we're going to steal some more of Josh's time (who not only won a pretty serious award for young illustrators, but is also along for this wild ride) to animate our own vault-tec commercial.

I'll remodel the TV set now that I have a brand new PC that can run a simple area at >15fps 1080p, and we'll also call Roger Owen in to do a little ADR on his intro. We think it sounds great, but the "Bane" comments (psh, no, think Kentucky Darth Malak, :p) needs to be fixed. It was just bad audio.

After that, it's straight back to work on the mod's First Installment in Vault 18.

If you are wondering about a release date...

Look at this document: 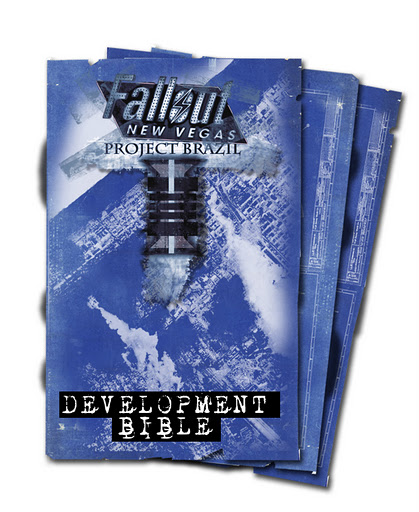 If this document is Green, we will release the following week.
If it is NOT green, through and through, it ain't ready to fly, captain.

We have another month before we return from LA. We'll be richer, more confident, and ready to see it through to the end. Til then, just hang on. ;)

Congratulations. I was a little surprised as well when I noticed it on PC Gamer :P

Mee too! And when it was re-posted by Obsidian, twice! You can't imagine the smile on our faces. We're going to shoot ourselves in the foot by taking so much time off to finish Brazil's first installment next month, but it's gotta be done. Like I said above, it's that important.

"as the internet tends to do to us from time to time." I don't get it.... I'm utterly confused by the stuff posted on that link.

Once upon a time, a bunch of internet conspiracy theorists launched an attack on Radian-Helix team members totally out of the blue. They found us through ModDb & Project Brazil, and went batshit crazy when they found out about our Magic Green Screen. You'll have to read up on it. It was very stressful at the time, very expensive, now it's just funny. Adds to the lore of RHX.

This seems awesome. Do you really expect to release the full mod by March?

Just the First Installment. But should be March.

Wow somebody from Zeni, Bethesda, or whoever is in charge should pick you guys up for an official DLC package contract, with an integration of some of their people to help you guys with development. This would make an awesome console port if gets to be extremely popular. Hopefully this mod goes viral will be fun to play I've been following this in the dark since it inception and oh boy do I wish the best for these guys.

I'm so happy I could cry.