I had been running a bunch of AI only tests the past few days. Rebellions basically never happened, so I increased the base attraction to rebels, and they still wouldn't happen.

I finally found the issue. In vanilla, faction support in AI controlled empires just stops increasing sometimes. There was a faction that had been stuck like this for the last 5 years.

As a workaround, I made a hidden event for rebel factions in AI empires that increases their support if the faction is large enough. Not that most people would even notice that it was broken, I just like pointing it out when I fix things.

Anyways, as for why you're really actually here! 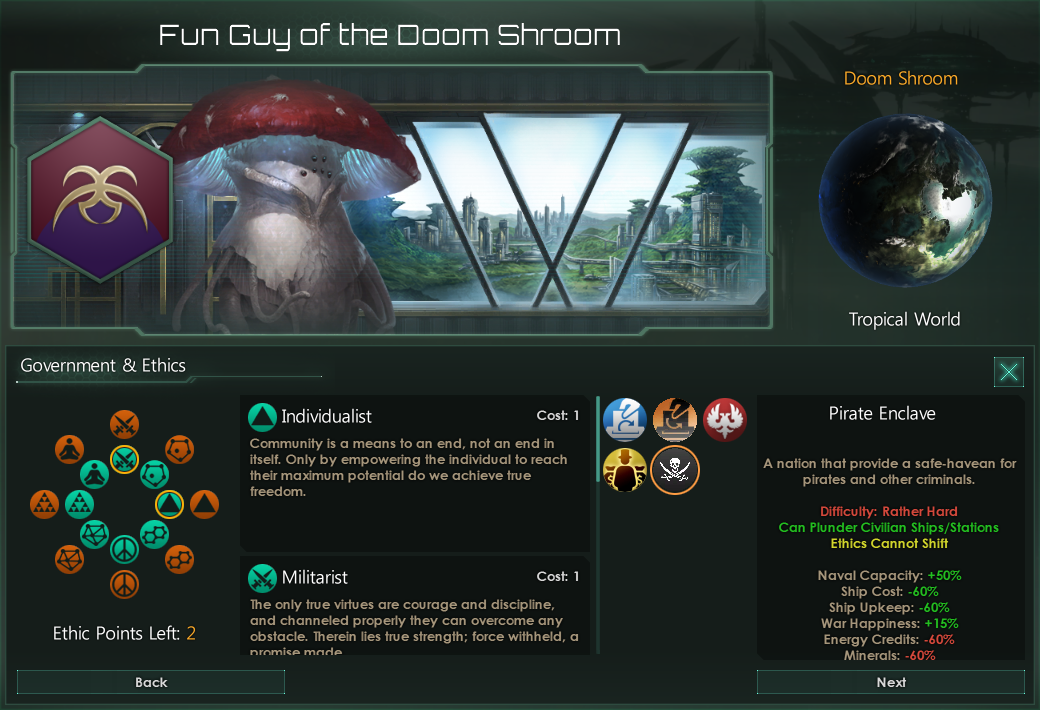 Pirates are a bit of a mess. A mess of compromise between the wild experiment that they are, and what the AI can realistically handle. For example, when I started testing them, your ONLY source of income was by raiding. But the AI refused to maintain the ships it needs for raiding without actual steady income, which makes sense for normal empires, but doesn't work so well for pirates. The best fix I could find was to make pirates sustainable without warfare, which wasn't quite the point...

So with the bad news out of the way, here's some of the cool stuff they can do :D 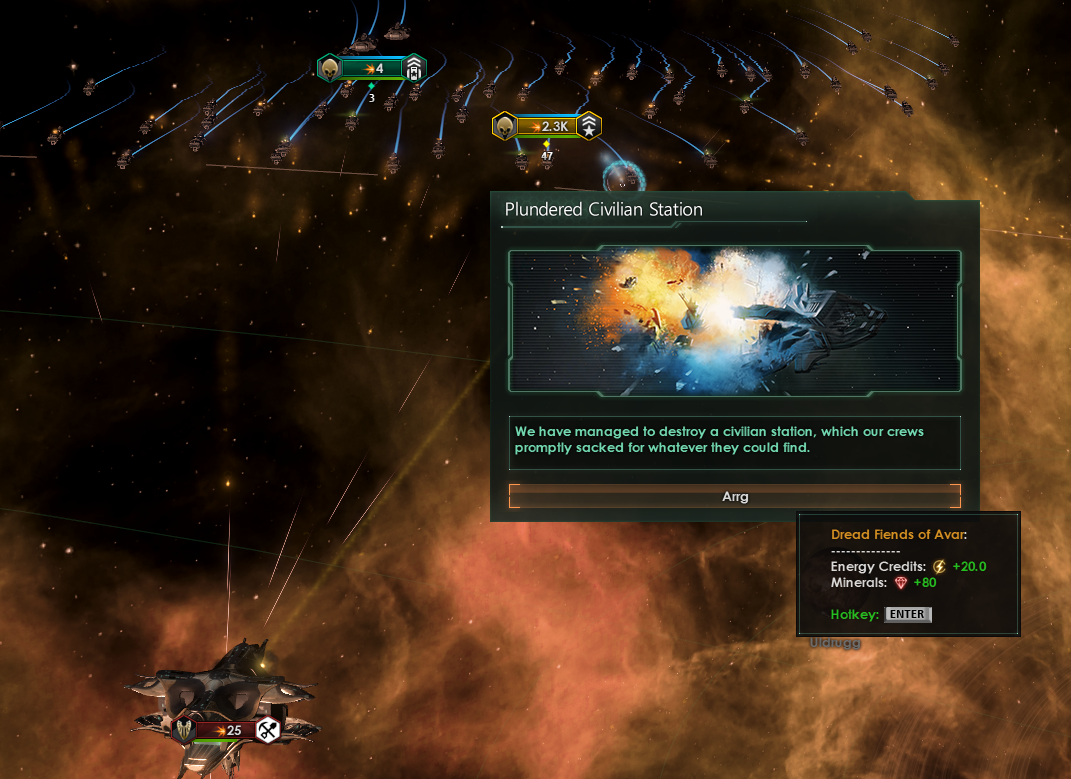 Whenever pirates destroy civilians, they get to loot some resources from them. This is their primary source of income. Even if the maintenance cost for ships is reduced for the AI's sake, you still need a solid stream of minerals to build/upgrade/repair your ships.

To stop pop-up spam, you only get notified about plundering civilians if it's been a while since you've done so: 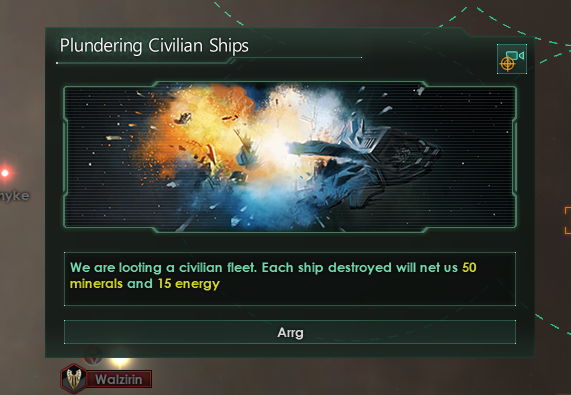 The owner of the civilians gets a similar event notifying them of the cost, which is slightly higher. It's worth noting that losing civilians still costs resources, the only difference with pirates being that they get to keep some of them. This makes destroying civilians to harm the enemies economy a viable war strategy.

Civilians destroyed by non-empires (space monsters and the like) don't cost you anything, so if a trading route happens to go through say, a mining droid system, the owner won't lose resources due to AI stupidity.

So while raiding is the main source of pirate income, they have another option for some extra cash. 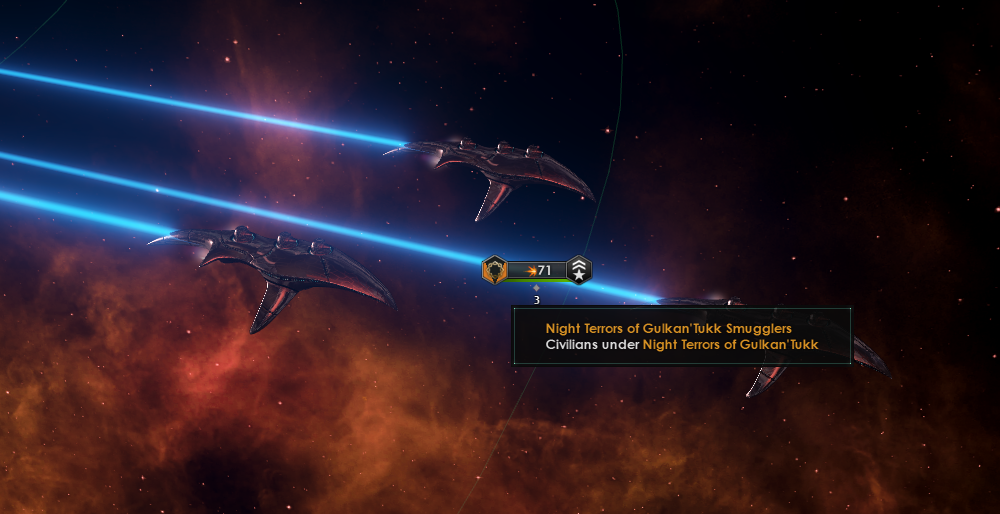 There is a special policy that pirates can enable that let's smugglers spawn from their planets. Smugglers are a special type of civilian with the following behavior:

Rebel factions have a new support effect that increases the factions support, each smuggler mission in an the empires territory increases the chance of it triggering. This lets small rebel factions stage more protests, help more slaves escape and just cause more problems in general. The only way to stop the smugglers is to declare war on the pirates who they are coming from.

Each smuggler run will earn a few resources for the "host" pirates. It also makes the victim empire hate the pirates more, but it's not the end of the world when you consider that: 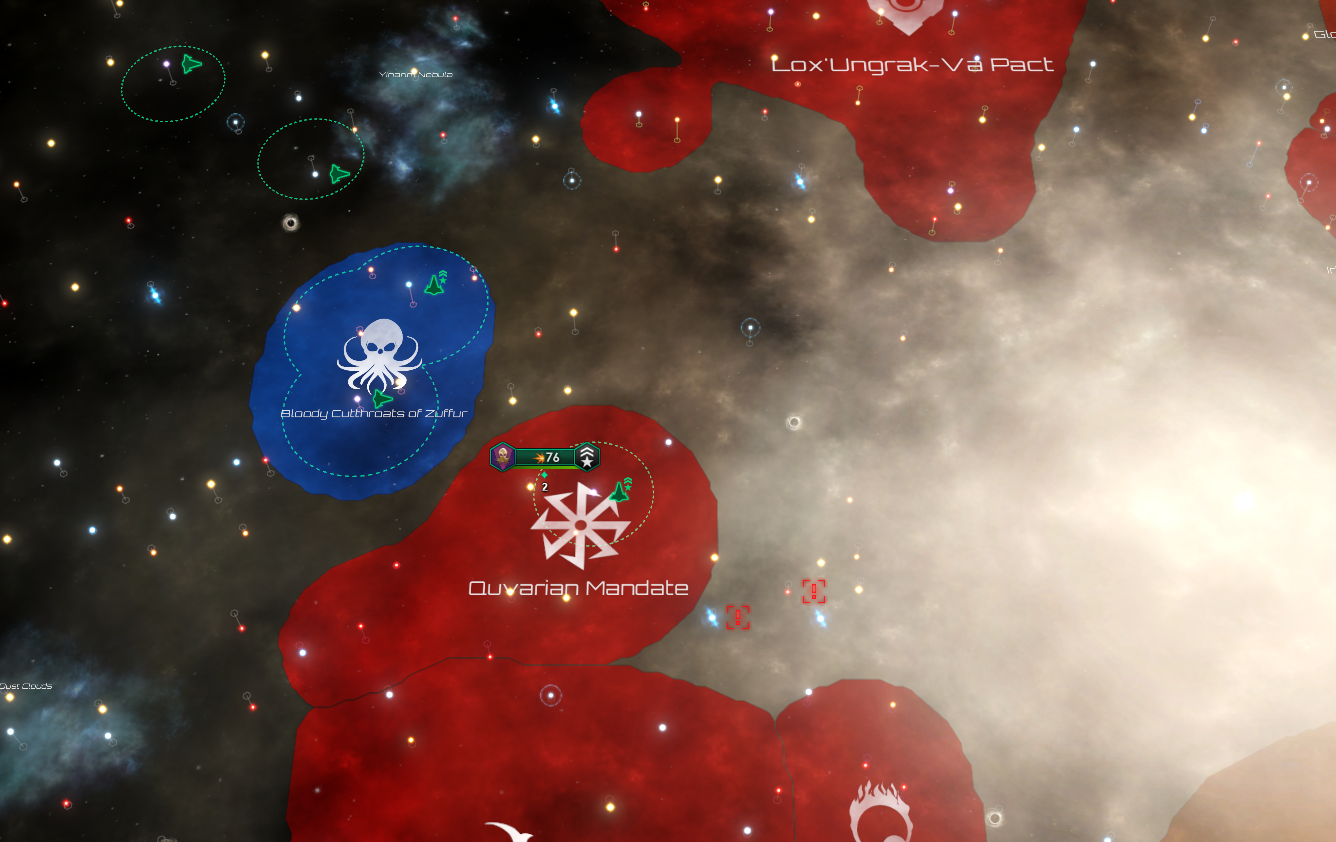 So that's the jyst of how pirates work. Even if they can't really be what I wanted to make them, they offer a more hit-and-run, guerrilla style of play which can be a unique challenge. Plus, having one spawn next to you at the wrong time can be rather... fun, in a Dwarf Fortress-y way!

While I'm at it, there's another sorta-big addition that I want to talk about

If an empire is spiritualist and has "Free Religion" enabled, foreign spiritualist pops who are let in (asylum/migration treaties) may become heretics. Heretics are pops who are still spiritualist, but have beliefs contradicting those of your empire.

Heretics do not have the reduced ethics divergence that spiritualist normally get. Heresy can spread quickly if free religion is enabled, but heretics and non-spiritualists will have rather severe happiness penalties if you outlaw it.

The heretics will then also form a faction. Whenever the support of the "heretic faction" increases then the following event triggers: 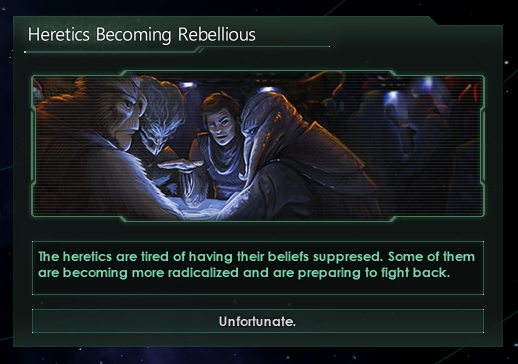 There is so much more I want to cover, but seeing as I'm releasing the mod in a couple days anyways, I'll just let ya'll see for yourselves!

And honestly, I'm just ready to finish this whole thing up and get my free time back :P

Have you thought about giving pirates "mobile bases"? It would feel quite a pirate thing to have :P

I based pirates off the "lawless planet" sci-fi cliche, rather than the "wandering bandits" sci fi cliche. I'm certainly not going to redesign pirates from the ground up at this point, but I'll keep the idea in mind for the future if I can think of a practical way to do it ;)

The smuggler mechanic is an interesting one, I wonder if it's possible to add the ability to increase "policing" somehow without having to declare was on the pirates. Another mod called Imperial Routine allows sectors to have fleets, so I wonder if it could be possible to have an "interior" security fleet managed by the ai that just patrols your space and targets pirates, smugglers and other non-friendly mobs.