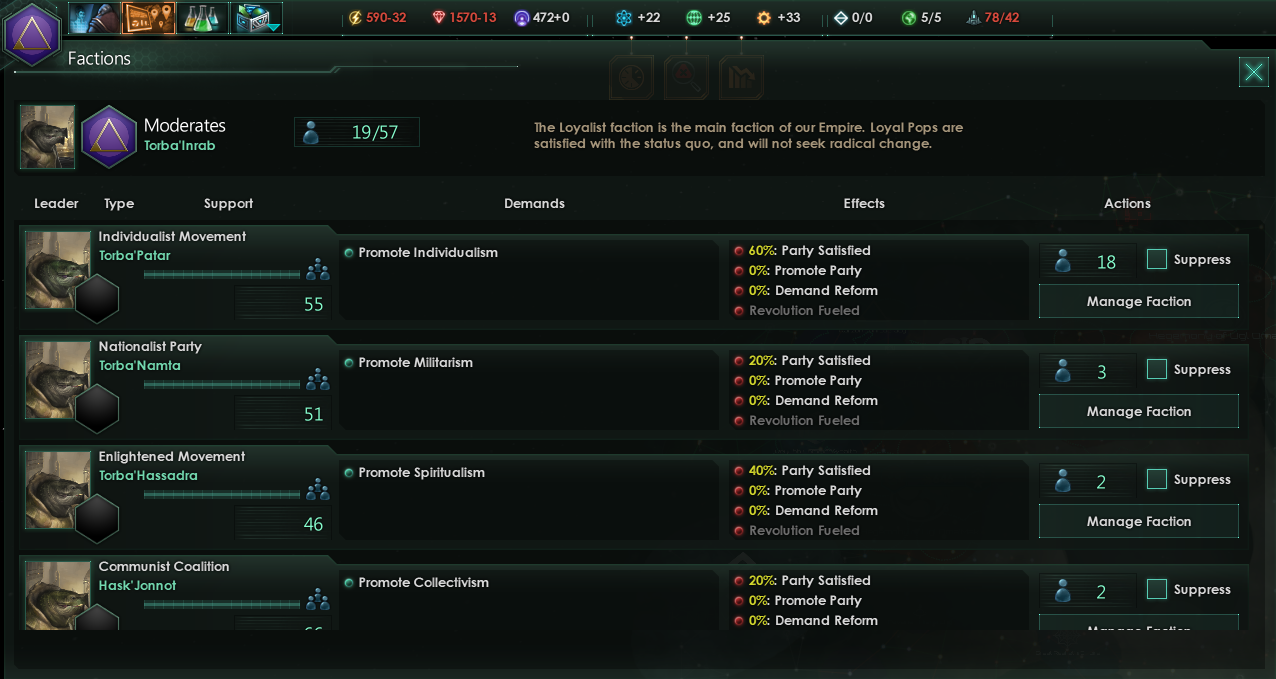 Political parties are a new type of faction that will attempt to shift your country ethics. Pops will join parties that align with said parties ethic (individualists will join the individualist party). Pops will be more inclined to join parties that relate to your current situation (the pacifist and militarist parties have a higher attraction during wartime). The party effects are as follows:

As long as your country ethics align with the party ethic then the party support will drop ("Party Satisfied").

If the party support starts rising then "Promote Party" will trigger. This gives each pop a small chance to convert another pop in your empire to adopt the party ethic.

If support keeps growing from there then the party will "Demand Reform". This means that they manage to get a major reform passed through parliament to change your empires ethics. You can either choose to sign it into law, causing your country ethics to shift but also outraging pops without the party ethic. Or you can refuse it, causing you to lose democratic tradition (see below)

If you refuse a demanded reform then the party will start to become rebellious. They can now trigger the "Fuel Revolution" effect causing a random member pop to gain the "Rebellious" modifier (-15% happiness and more likely to join rebel factions) 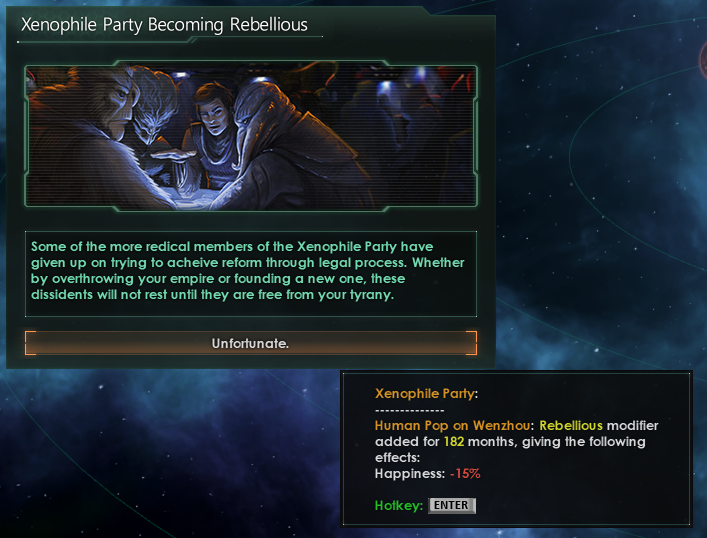 So that's the basics of political parties, now on to Democratic Tradition!

Based on the republican tradition from EUIV, Democratic Tradition represents whether your empire embraces or rejects democractic ideals.

This mechanic has two goals

Pops will gain a happiness bonus so long as Democratic Tradition is kept high, if it gets to "wavering" or lower then pops suffer a happiness penalty instead.

If it gets all the way down to forgotten then you may become a "Corrupted Democracy", a different government type without political parties and where elections are held much more rarely. Corrupted Democracies are much more prone to revolution than regular ones are though!

That about wraps it up for now! I should have corporations working soon, so hopefully I can get an update on them out in the next few days. And if everything works out then I might just have a playable version of the mod available by the end of the month :D

Could you change Nationalist to Xenophobic and Communist to Collectivist? Those two are human ideological terms and don't really fit Stellaris.

The names are randomly selected from a few possibilities (that include the ethic names), but I renamed the ones that are more exclusively 'human' ideologies to make them more ambiguous (communist is now communal, for example)