A shipload of piratey goodness has arrived in port once more! Read on to see what treasure there is to be uncovered in the latest release of New Horizons!

Build 14 Beta 3.4 is now available from our Downloads Section. If you are upgrading from a previous Beta 3 version, you only need the "Part 1: Installation Wizard". If you are doing a brand new install, use the "Part 2: Contents Archive" as well.

The first thing you will notice with the new update is that there are yet more storylines to choose from. Both Brave Black Flag and Nelson's First Command bring something new to the table. The first is an excellent start to a free-booting pirate career, while the latter is set up with enhanced free play for Royal Navy players in mind. 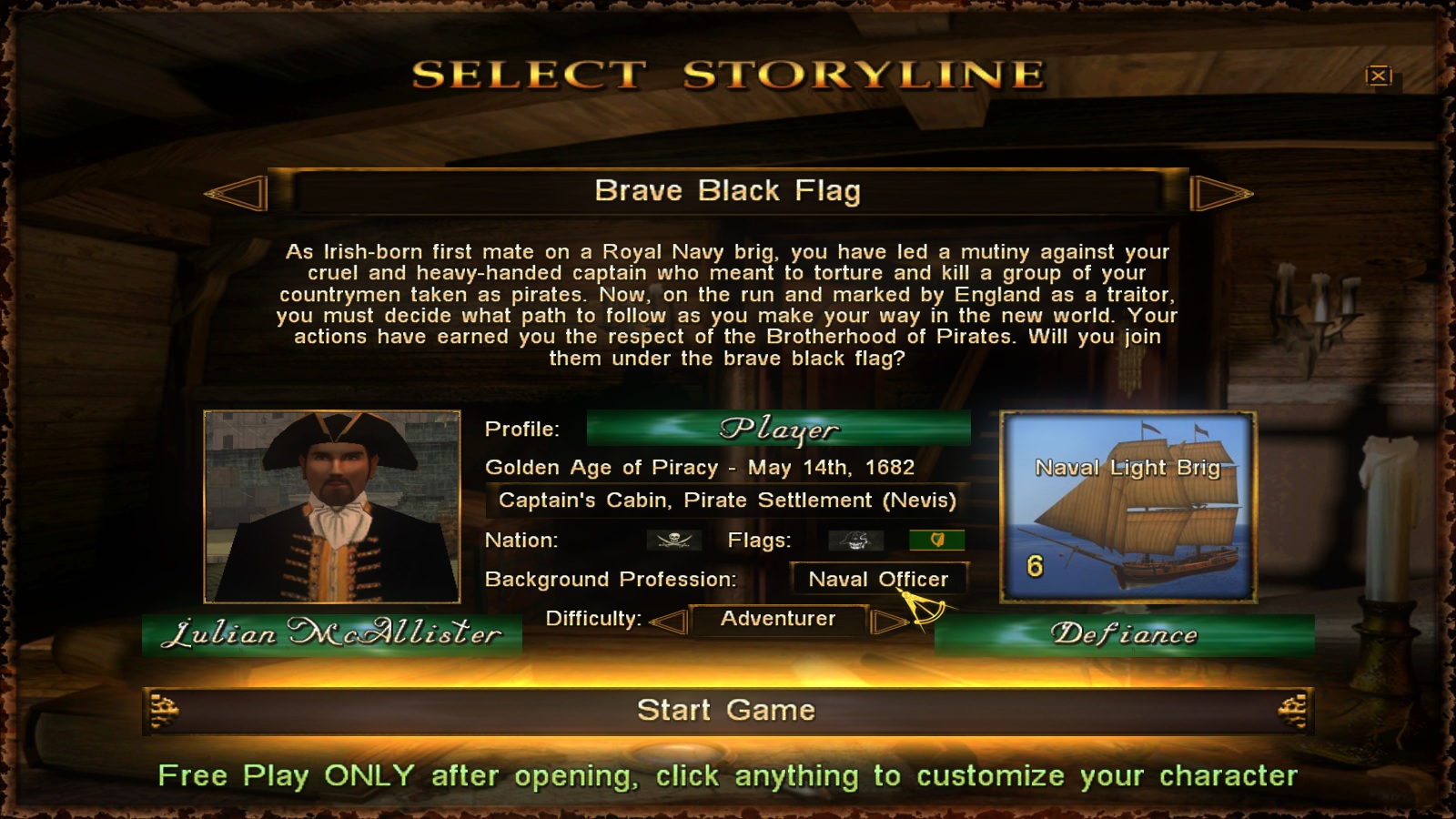 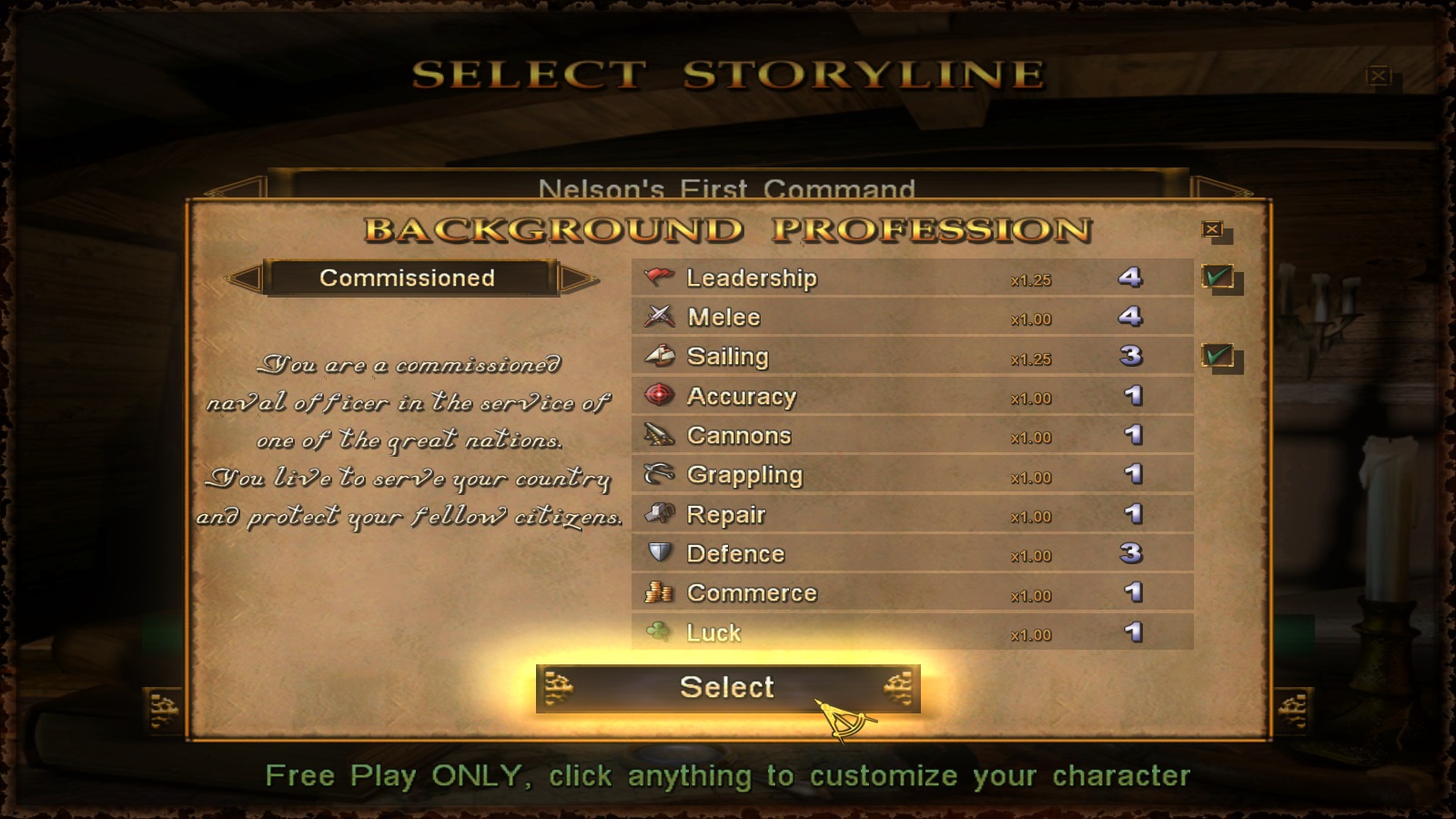 However, you are not stuck to any fixed starting scenarios. As per this release, there are a lot more character professions to choose from at game start. Each one comes with its own advantages and disadvantages, special starting items and more. And we have every intention of expanding on this concept for our next update too!

Tired of the game's towns all looking very similar to each other? Well, that is a thing of the past now! A lot of towns have been replaced, including Tortuga and a lot of the ones on the Spanish isles. 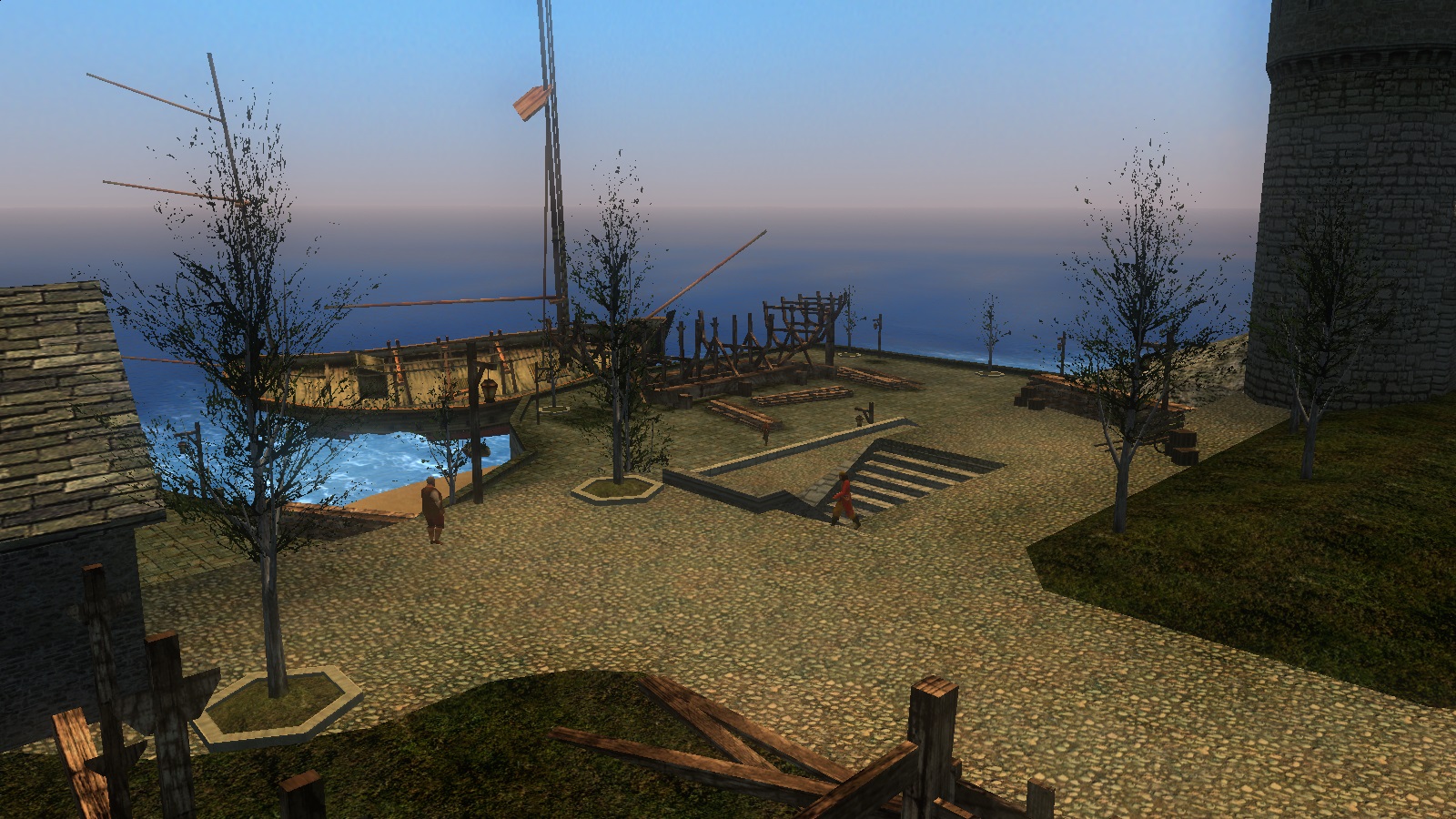 And Aruba has received a very interesting-looking port as well! 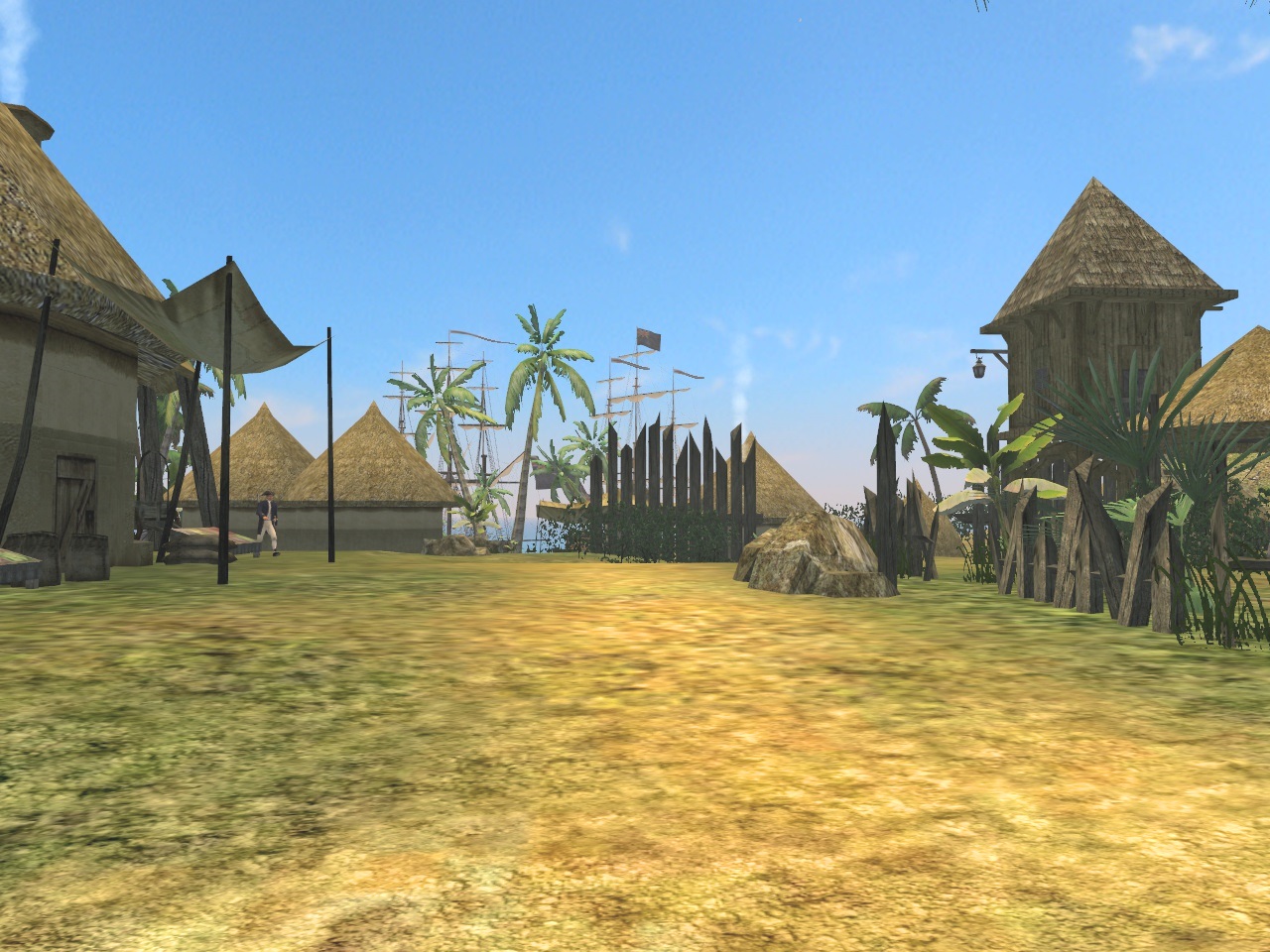 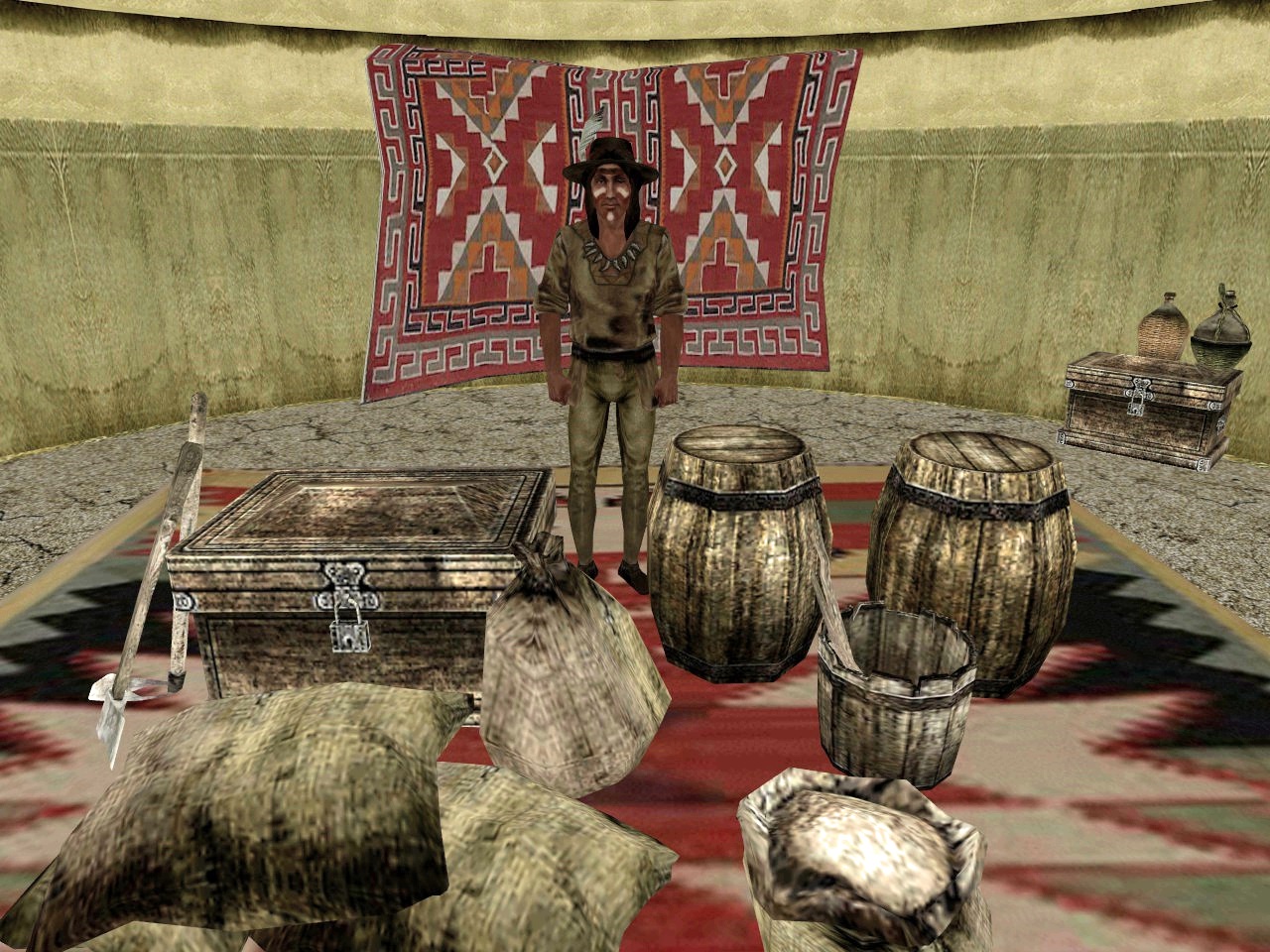 But even existing locations have had new stuff added. If you need more information, surely the local monks would be quite happy to point you in the right direction. It may be dangerous to look into the secrets surrounding the church. But ultimately very rewarding as well since there is something very special to be found!

The Fate of Cartagena

We have showed you parts of the story before and teased you with exiting things to come. Therefore we are now proud to announce the completion of the Cartagena Quest in the Bartolomeu storyline! An ambitious project indeed, this story combines many elements and is almost a whole pirate film in and of itself.

For this story, we ended up adding the entire coastline of the Spanish Main into the game. Specifically this was to add the famous city of Cartagena in its rightful spot. With the very specific intention of blowing it up with the biggest and most exciting explosion in the game!

But before you get to that, there are infiltrations to take care of. Puzzles and prison-breaking. Secret tunnels and a governor's daughter. And what pirate film or game is complete without a sword-fight on a yardarm?

A lot of time and effort has been spent to make the regular game more involving. As such, the smuggling system has been tweaked to be much more interesting. While you can keep going about your business as you always did, you can make things much easier for yourself by planning your operations in advance!

The coast guard has placed scheduled patrols at all the islands, which means that you can avoid those patrols as well. Provided you figure out when they are! There are several ways to that. After all, what else are drunk soldiers in taverns good for? But you could also search a coast guard corpse after being caught and fighting your way out. 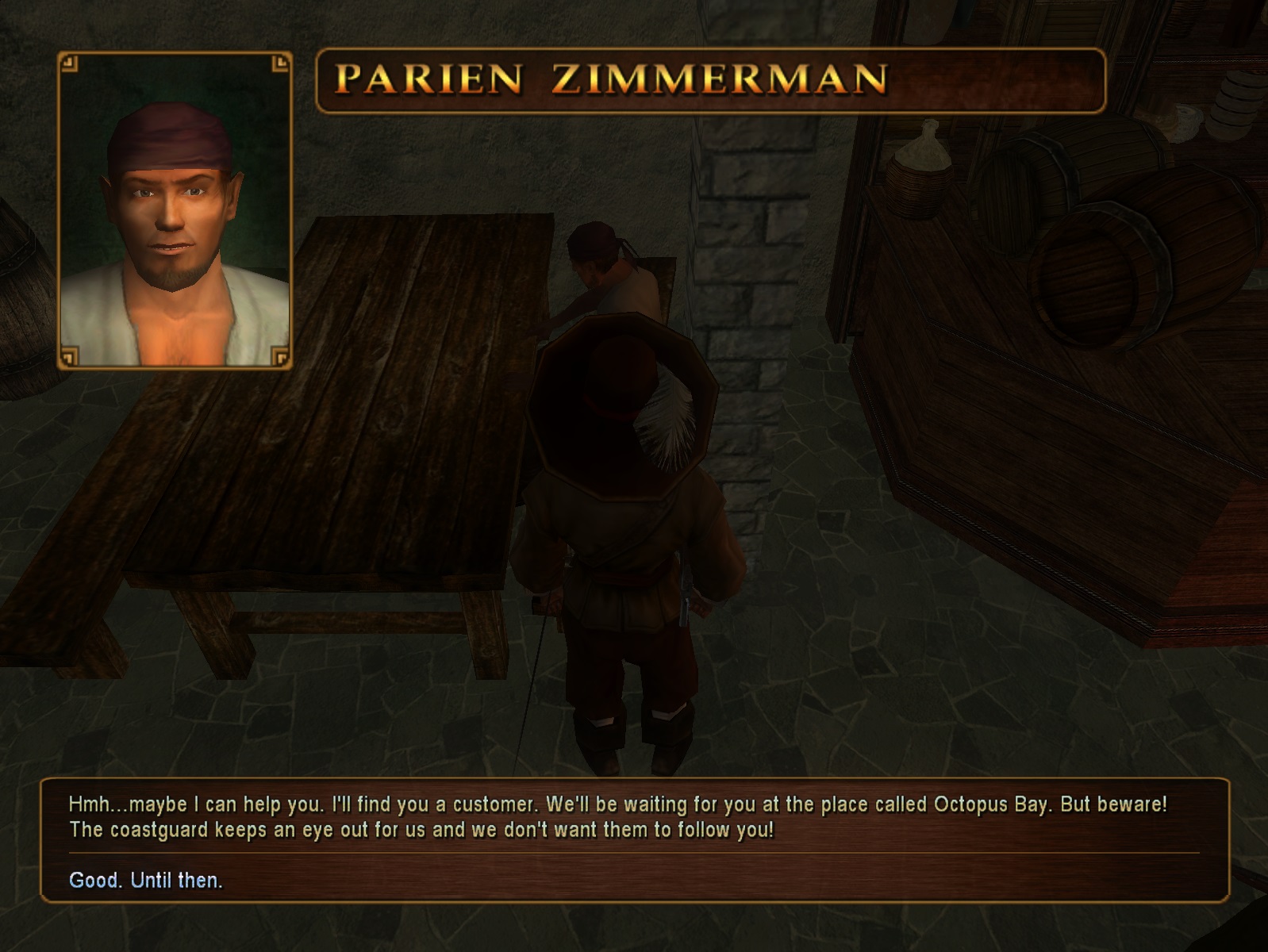 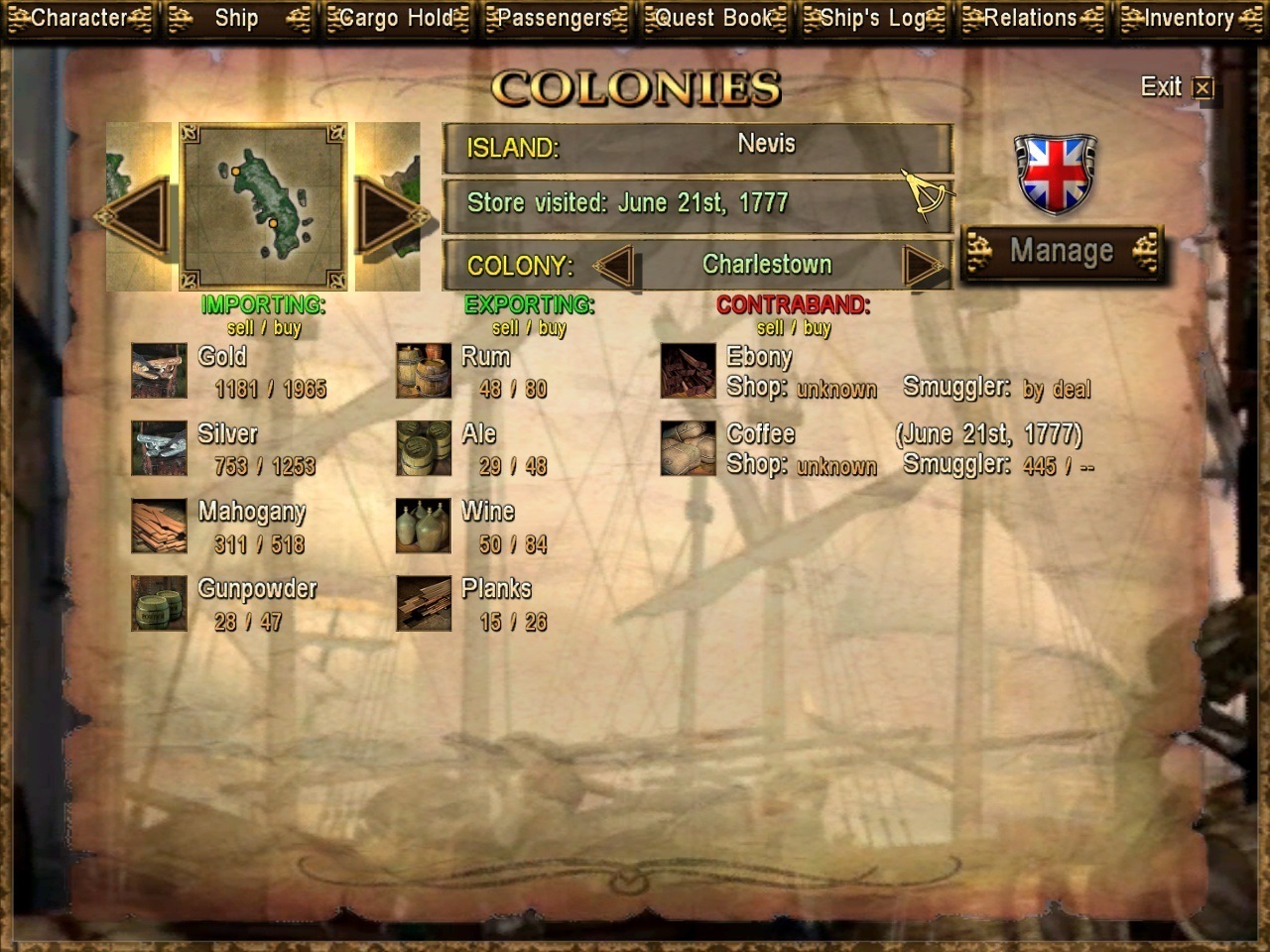 You can wait for the right time for your secret dealings by talking to your ship's crew on deck. And after the transaction, you will notice that the Colonies interface has helpfully updated to show you the regular and smuggling prices for the relevant goods.

But be careful! If you abuse your newly-found knowledge too much, the coast guard will take notice and adapt the patrol schedule. They may even restrict trade to the island further by declaring more goods to be contraband. Though of course... there is profit in that too!

Work has also been done on the Locked Skills introduced with the previous release. The Fetch Quests that unlock some skills have been improved and also expanded to include the Shipyards and Blacksmiths. And there are some new abilities as well. One for gamblers, two related to the new smuggling updates and the last to let you have a whole lot more fun with your pistols! 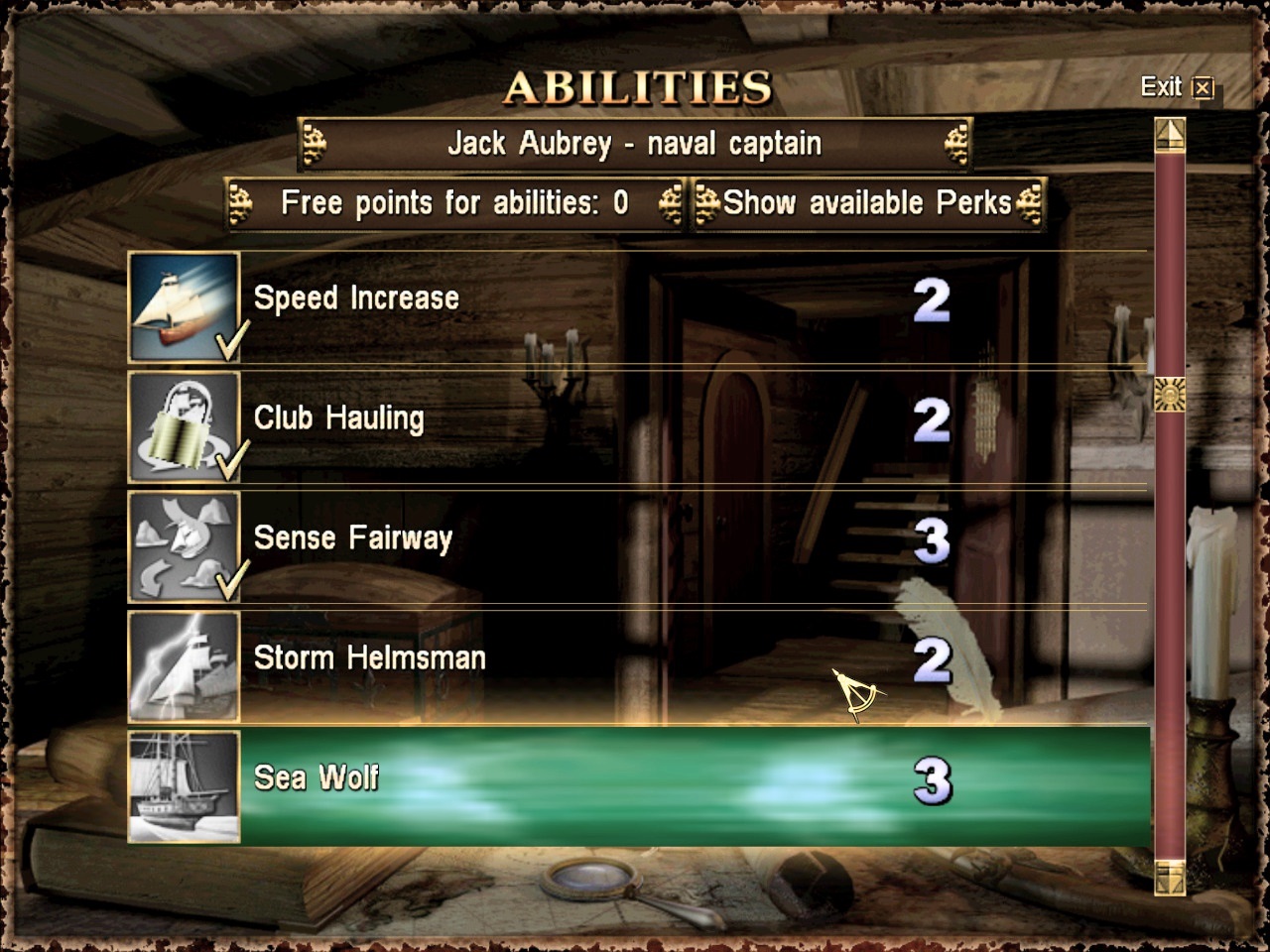 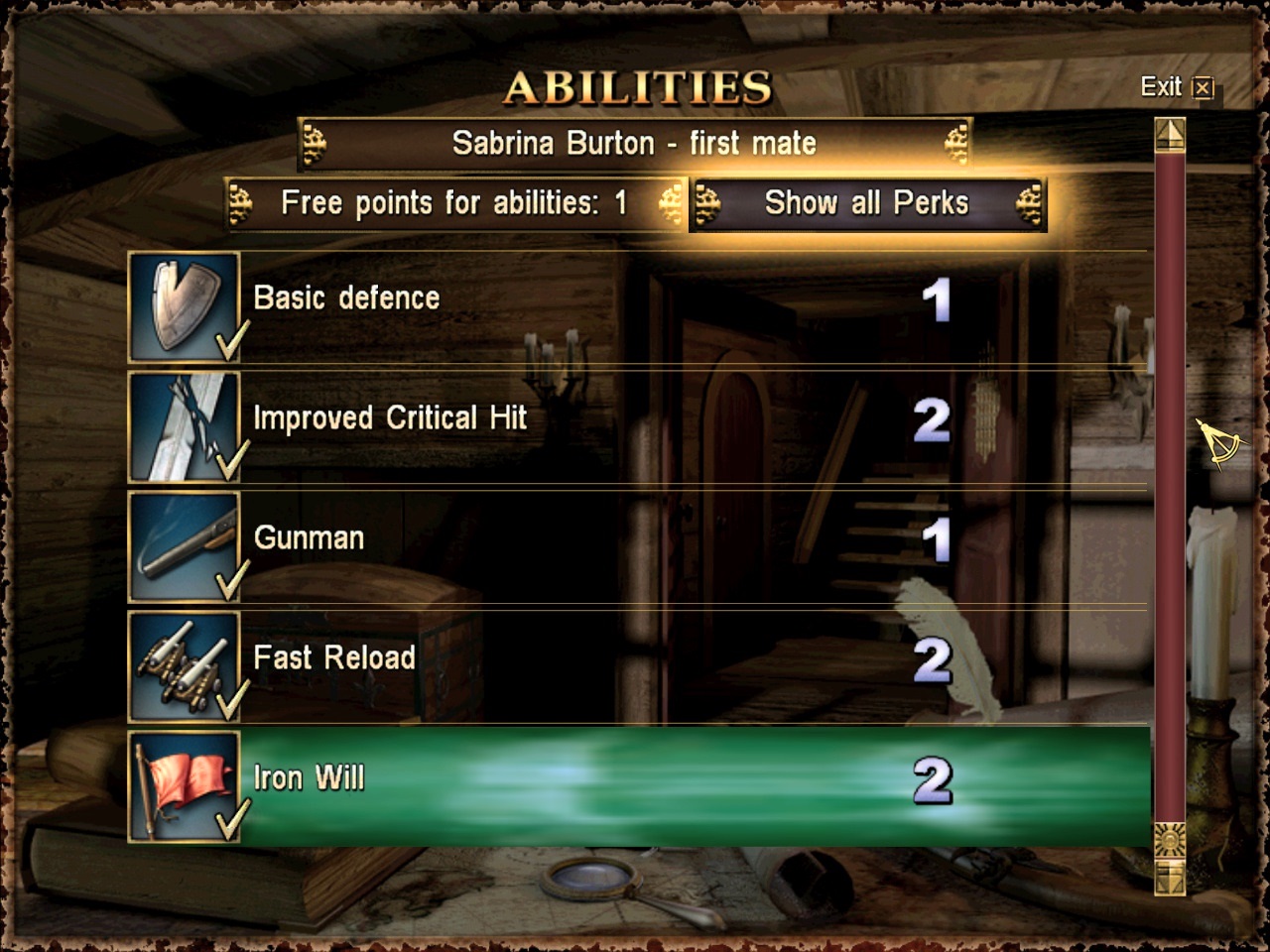 Additionally, it has now been made clear which ones of your officers contribute which abilities as only those ones are now shown for them. And if an officer has a perk that the player doesn't have, an extra tick mark will appear to clarify on this too. An additional filter button to show only those perks you currently have and can get based on your free points makes this quite a convenient change.

Therefore two new updated pinnace models are added to the game as well, looking much better than their predecessors.


Aren't storms tremendously annoying? It is like the god of the sea is out to sink your ship with you on it! But what if YOU could be the one to control those storms? Let them end at your will and bring them down on your enemies instead! Everybody's favourite cursed captain, Hendrick Vanderdecken, has received some new stock that he is willing to sell to you. But as usual.... only if the price is right! 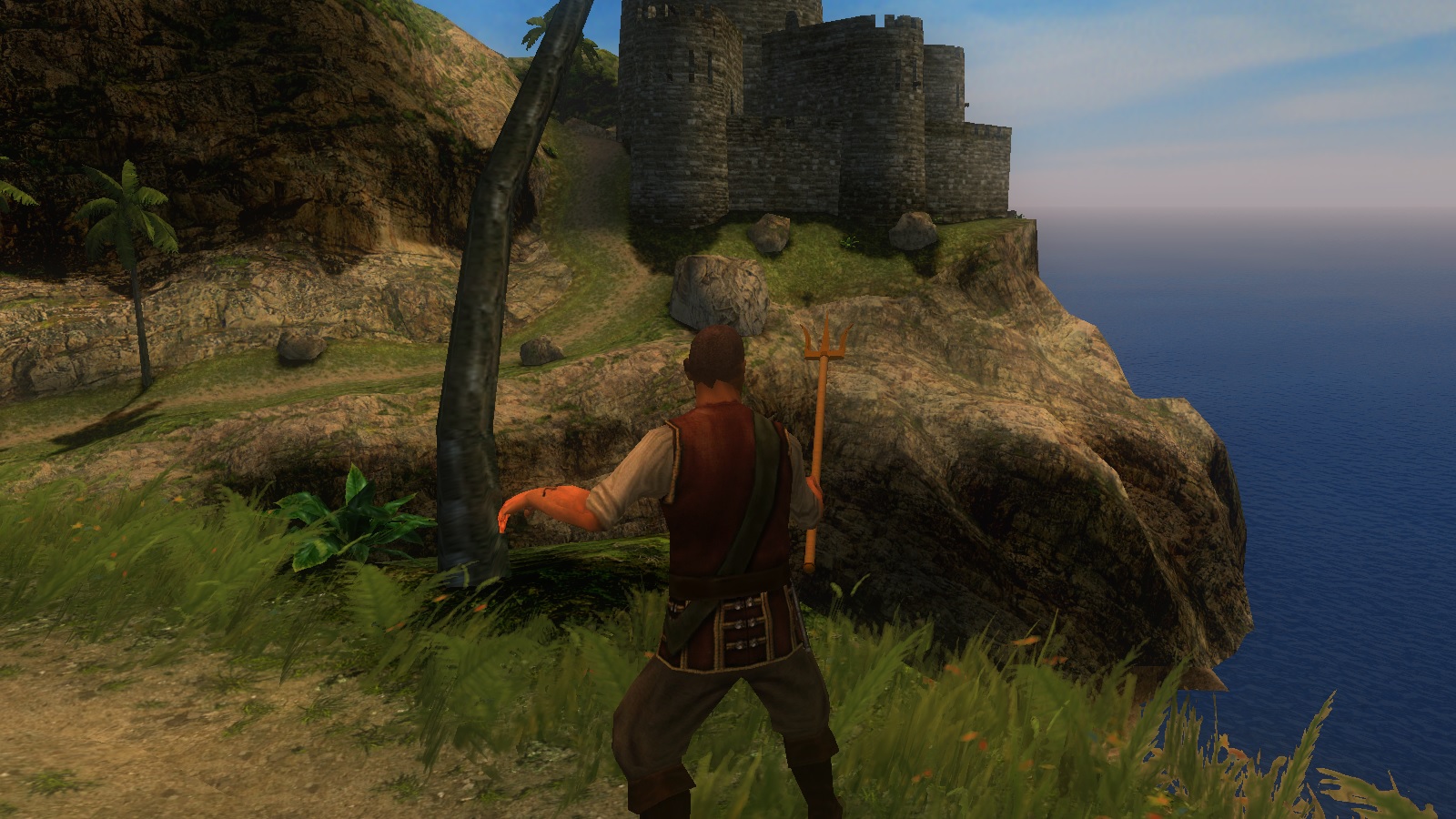 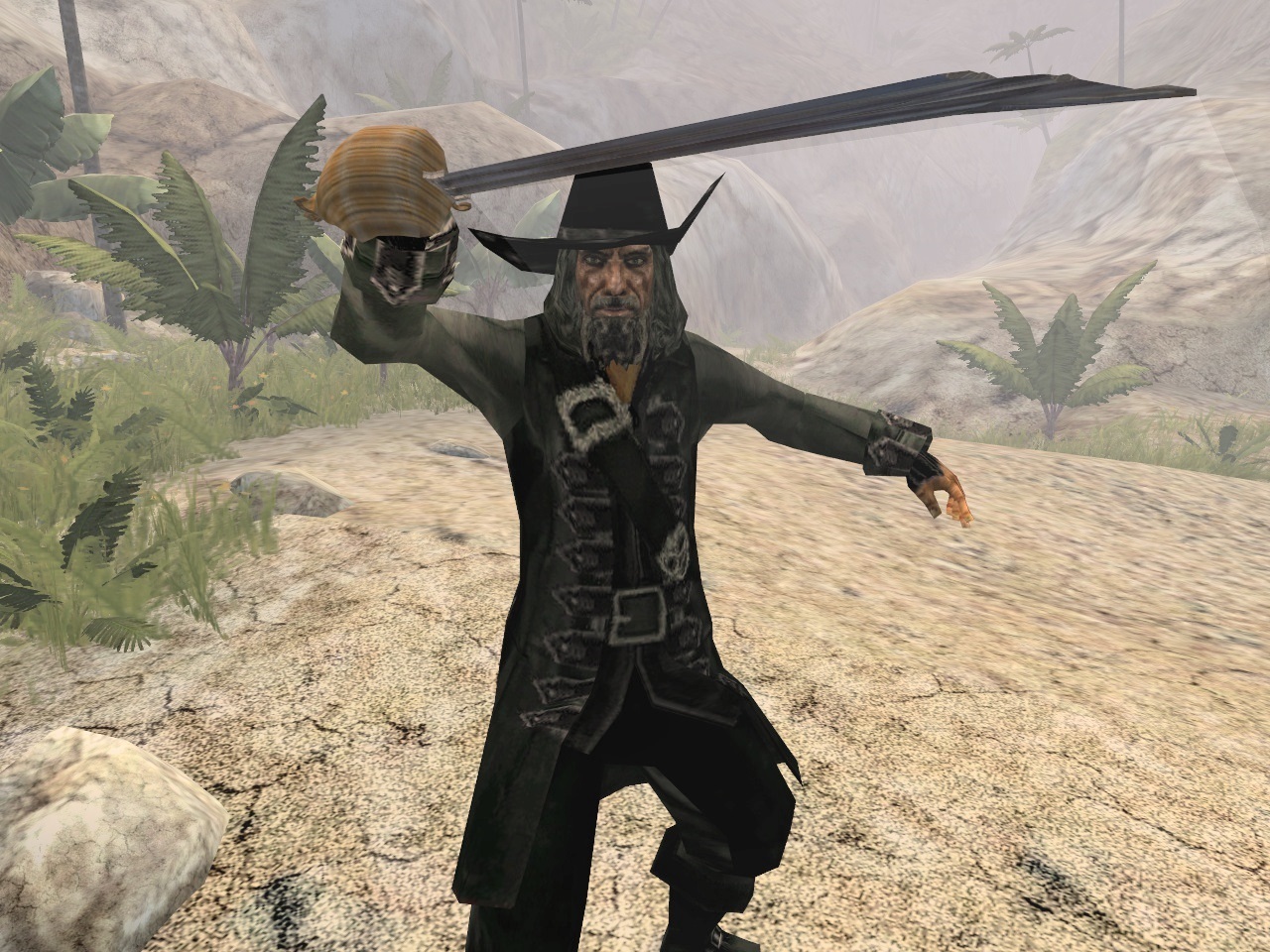 Another famous pirate can be found very close to Vanderdecken's usual hide-out. But Blackbeard is a tough opponent indeed and very hard to kill! In fact, there is only one very special way to do it. But fans of the Pirates of the Caribbean films should be able to figure it out. And looting his sword gives you an interesting advantage in sea battles!

Message in a Bottle

While an inappropriate saying in a Caribbean setting, of course the above is still merely the tip of the iceberg. A lot of work has been done to fix whatever issues with the game that we could to make this the most playable and fun release that we could possibly manage.

And behind the scenes, a lot of other work has been done on our other project, the non-commercial age of sail seafaring game Hearts of Oak: Conquest of the Seas! So be sure to check out the latest development trailer:

Now set sail for the horizon and discover what new treasures lay beyond!

Hurray! Just as I was thinking of going back to this wondrous mod.

I was wondering. If the game isn't super stable, would it be possible to add an autosave feature that saves the game every 2 minutes or something? Also, loving the game! I can't wait for the Hearts of Oak to catch up to this level!

Every reload might be possible. Not going to help performance, though.

Brilliant! I support this modification and I luv it. Glad to see there is still progression since the original game came out.

I keep getting a black screen when I try to launch a new profile on practically every character.

Wow, this mod is still being updated. I was sure it's been forgotten but i was wrong! Gotta grap this again at some point and try out, i still damn love the mod.

Indeed we're still working on it. And how! See here for out latest WIP: Piratesahoy.net

good at all, it is my pleasure to be here with all of you, I've played this game for a long time and now again with updates that make it more and even better, I congratulate the whole team for what they are doing, meet the dream of everyone who once wanted to be a sailor, I'm really grateful clearly :) good job

This team keeps leaving me in awe of their dedication.

I've installed the Mod, however some character textures are not loading (Including the main one). It is not everyone though, any way to fix this?

WOW HI Everyone! So now that PA! is openly discussing the newest version of GOF ERAS2 (2.6.0) from Buccaneer's Reef Buccaneersreef.com on their website - I thought I would give a shout out for everyone visiting over here to come on over and give our new version a try. Most stable version ever in DX9 with 64 bit coming soon. Also more content than ever with over 600 distinctively different skinned ships on over 200 different models, almost 600 items, several hundred weapons and weapon combinations as well as 136 different playable historical characters (most being actual real existing pirates or prominent captains of the time possessing distinctive ships named with their original names), new locations and more! YARRRR!!!! MK