Becoming emperor is not easy, you need to reach the top of the roman society, make powerful friends.
Dont make powerful enemies, get your army ready, plan everything and strike at that perfect moment.

2 As emperor
You can declare war.

You can freely assign governors

You are emperor until you are deposed by force.
If a praetor has gotten the province of Sardinia and you as emperor assign him Syria, than he will go to Syria because it is higher priority.

A triumph will get you honor (20), and 20 more renown. To be a consul you must have a triumph.

4 barbarians
Barbarians; Groups of 300 badly geared barbarian soldiers. 2 or 3 groups may team together and try to besiege something. Governors are there to defend against these and will not leave their province to respond to martial summons, other vassals with no province will follow you. Governors will accompany but only with a summons directly to them.

5 contracting and reinforcement
A legion consists of 350 units of which 200 are legionairs, 50 archery, 50 cavalry, 50 auxiliary
So no need to actually contract troops, your troops will be filled automatically because Rome sends troops to you, with delay ofcourse and chance of them getting attacked

6 governors
A governor will have approximately 350 troops if he controls one legion so with the biggest provinces he can have 1400 troops :D

8 ranks
all ranks sorted at position:

1 emperor (total ruler)
2 governor, become an governor of like Africa, and have control of its legions etc, only people having chance in the four emperor year (1-4 legi troops)
3 two consuls, their function is a sort of symbolic, the function is more orientated as the way to become a big governor, ofcourse the game will have an actual senate, so there's a lot you can do here, as you battle in the four emperor year you can even try to add democracy again. (Sort of roman democracy) (no troops but personal gaurd of 16)
4 praetors -- important this is more like a leader of a smaller group (80 troops)
5 quaestors -- civilian function, but you can contribute to the senate (no troops)
6 tribunes -- army function you fight under an legate to get experience and get small missions 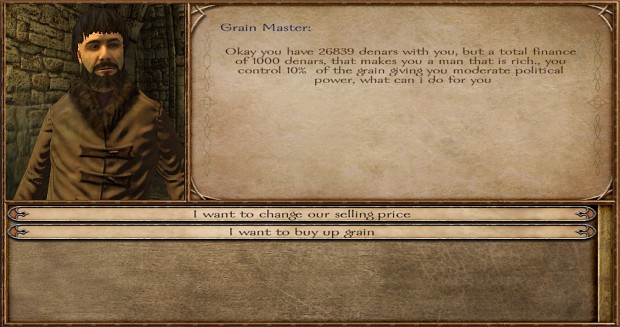 This is Great... one of the best political systems in any warband mod i have ever seen.
but i would like to ask

1. what do you mean by governor?, are they vassals, or do they have vassals under them (who are also your vassals but they respond to the governors orders if you don't order them.) and can they start their own "sub" campaigns and are joined by the vassals (who are Legates probably?) of their province (each legate/vassal could lead a legion if their is more than one?), are governors still vassals to the emperor? or is their territory considered independent (kind of like in bellum imperii where roman gaul, roman Spain, roman Africa... etc are separate and linked only by name and culture i.e they are not actually a part of your Faction and their A.I can declare war on another roman faction )?

2. what class would you need to pick in the beginning to get any of these ranks?
what are the other classes, can you be a normal legionnaire or a farmer or merchant or slave/gladiator?

3. What is the senate? (i mean what is it in the game), what kind of interactions do you do with them (quests, political **** like denouncing lords... etc etc maybe? ), what influence do they have over the progress of the game?

P.S just voted this mod "mod of the year", it deserves it

Thank you for voting my friend :D.

1 each legion has an general a 'legate' a governor is the boss of an province, he can decide stuff in the province, and is the boss of the province. His power will depend on his province.
Example:
Governor of Illyricum, the governor controls no legions, one town and one fort. He will control approximatly 350 troops, bad trained civilian troops counted. And of course he cant take all this soldiers with him on campaign.

Governor of Africa, the governor of three legions, three towns, one fort. He will control approximatly 1800 troops. So the place where an governor is send tells much about his political and military power. And defines whether he is as powerful as a vassel or much more/less powerfull.

They are loyal to the emperor and chosen by the emperor. - they cant declare war on another roman faction. There can be local revolts here tho, these wont happen in italy herself.

2 the classer are: slave, gladiator, roman recruit, roman experienced recruit, roman centurio, roman tribune (equites)
the only rank in which you REALLY can become emperor is tribune, otherwise you will never be accepted.

3 You will be a senate member when you become quaestor, you will sit in a ring with other men and will vote for plans, will be able to propose things and are important in deciding stuff. The senate is a way to get people to like you, to make friends, starts plots and is quite important in the game.

This is frikkin' awesome
The political side of this mod is what's getting me all nice and wet ;), one of the best i have seen in a mod so far since viking conquest (i hope).
Keep up the good work man

1- This is where his scripting skills come in.If he will use the basic module system, yes, the provinces would probable be autonomous different factions,but with some new dialogues where you as an emperor can command the ruler of that province.

Edit : haha ,he replied when i was writing aswell

Or he can completely rework vassalage steps, where rulers are vassals within a bigger faction ,in this case the Roman Empire.I would let him do his job first and then we can see what's going on.His ideas are good and we better wait for a first impression of the mod and then come up with suggestions.

I get better ideas thanks to suggestions so please dont stop giving them.
Thx for all the positive reactions, you guys are awesome.

One more thing i would like to point out.
Being emperor, means you control a very large realm, and may anticipate war from many factions, from all borders, i would also like to know if you can order governors to launch their own attacks/campaigns using what military power they may possess (depending on the legions in their province) into lands bordering their provinces, at the emperors order. The emperor could accompany him and when he does, he actually leads.
what i'm trying to say is that calling for a campaign and drawing all of your military power to follow only you is just stupid lol

You can do something similar in mods which have diplomacy but at a smaller level.You can send out a message to one of the lords to besiege, raid, defend etc.The real challenge would be that the governor could take a few other praetors to accompany him in that specific area, that would be spectacular.

Exactly my point, that would be awesome

Governors being able to lead their own campaigns would be a good idea. And Tribunes being assigned a province where they help the governor is also good, although I do not think they should have any legions. For the campaigns, instead of ordering them what to take, maybe you should just give them permission to attack a faction and they will do what they want, conquer it or raid a village, because in Roman times the emperor is too far to be able to give any usable orders, an in the game the emperor will probably be at least a 'days' travel from the conflict. One thing that might improve this mini-campaign stuff would be to give orders to another governor to follow the one leading an attack. For example if the Governor of Pannonia is going on campaign you could tell the governor of Illyricum to join him with his troops and legates. If you are telling the governor of Cappadocia, who has two legions or something, to follow the governor of Syria then the gov of Cappadocia will also bring his legions.

Also, will it actually impossible for a slave or Legionaire to become emperor, or will it be like in normal warband where that only makes it harder?

Yes yes yes
if you could do all that i think this mod would one of a kind, already the political system, combat, sieges and then this.... boy oh boy
And yes it would be impossible, the Romans really only approved of patrician ranking people/families to lead them.
The only way non rich families could ever rule is if they get lucky money wise for at least a few generations, then they participate in wars as legates and gain recognition, only then would a family be even considered worthy enough to rule.
starting off as a pleb, or worse a slave is i think a big nope if you want this mod to be realistic and historical

When pleb or slave you simply cant become emperor but im plannning child continuation after the first release so aho knows what a few generations may do?

That just went into the list i'm making that proves that this will be the best mount and blade mod, holy **** man!

Not that it bother for this mod (which is great! but as far as I´ve seen it covers the more stable period of the Roman Empire^^), but just for historical correctness:

While it is true that till 235 AD only members of the senatorial aristocracy (and so very rich Romans) became emperor, 235 AD with Maximinus Thrax the era of the "Soldatenkaiser" (the german term, don´t ask me what the englich terminus is) began. During this period lowborn peasants which made a military career became emperor, because of the support of their troops, often against resentiments of the senate.

Can I unite tribes like the germanic tribes and be their King or so or would that be not possible? And custom troops would be interesting for your own Kingdom if you wanna go that path.

How do you install it? , i dont know it gives me an error