Today we have a couple of renders of some equipment that you might find useful when the tanks come rolling in. The Faustpatrone, the RPG-43 anti-tank grenade and the RDG-1 smoke grenade.

Today we have a couple of renders of some equipment that you might find useful when the tanks come rolling in. The Faustpatrone, the RPG-43 anti-tank grenade and the RDG-1 smoke grenade. 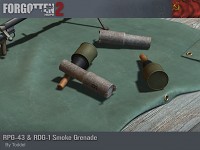 The anti-tank weapons available to the Red Army at the beginning of the war were adequate against the panzers of the time. However, by 1943 they had largely been made obsolete by newer German tank designs with thicker armour. The RPG-43 anti-tank grenade was designed to replace the older RPG-40, substituting some of the explosives for a more effective HEAT warhead. To ensure the perpendicular hit necessary for the warhead to work, the grenade had a long fabric streamer that would stabilise it in flight. This was folded up under the metal cone, which was forced off by a spring when the grenade was thrown.

The RDG-1 was a very simple smoke grenade, manufactured from cardboard and wood and activated by hand with a friction igniter. It was designed to float and could be used on water. Both these Soviet grenades were made by Toddel. 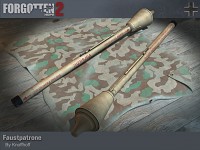 The Faustpatrone was the first recoilless anti-tank weapon developed in Germany. Development started in mid 1942 by the company HASAG, with the first batch delivered in August 1943. The first faustpatrones did not have any aiming sights, though these were soon added to the design. It had a range of about 30 metres, and the projectile would take a full second to travel that distance. When it arrived, it was capable of penetrating 140mm of armour. The later panzerfausts were developed to provide a more powerful and thus heavier warhead, but the faustpatrone still remained in production until the end of the war. Ours was made by Knoffhoff.

This looks amazing can't wait to use them :D