Through intelligent AI & differences between player classes we evened up the battle between teams, provided enhanced tactical options whilst providing an intense gaming environment. Its how we are able to make a playable FPS where in general games of this era are mainly strategic.

I've had a few PM's asking to clarify a few things with the AI so I thought I'd do that with today's news ...

The Zulu and British players and their corresponding AI have different capabilities based on their character class.

These differences enable players to tactically gain advantage in one area but lose out in others thus providing tactical options and a general evening out of player and AI classes across the game.

It means we can create an intense game in a First Person environment where previously games based in a similar era have tended to stay only strategic in nature.

Command
Each player has been assigned their own intelligent AI which can be commanded singularly, in small groups or all at once. The number of AI assigned varies between game character class and which side a player is on (British or Zulu).

The Martini Henry rifle takes around 5 seconds to reload and be in position to fire again.

Spears can be thrown at a faster rate then the rifle.

All AI weapons have a realism formula applied to ensure accuracy is not 100%. Gravity effects all weapons.

Movement
All AI can be ordered to move to specific rally points. The player sets a rally point via a flag marker. Alternatively the AI can follow the player (if the player moves to a new location so does the AI).

Sniper Class
With the sniper class the warriors are armed with the Martini Henry rifle however there are significantly less AI reserves available to the player compared to the warrior.

Warrior Class
The warrior class AI are armed with throwing spears. They attack by throwing a spear or move in close to stab an opponent.

Injury
If a Zulu AI is injured their speed is not impacted like a soldiers, they can continue to move unrestricted.

Firing
All Zulu AI find and attack their own targets once a player movement order has completed.

Tiredness
All Zulu AI do not become tired, they will fight at 100% efficiency.

Formation
The AI can be ordered to form up in lines and face the direction of the marker flag (used to set rally points).
The following shows the British player and his AI formed up in a line.

Command to Fire
The AI can be ordered to fire independently (when they spot a target) or fire on player command. The player can order all AI to fire at once, only front rank (crouched soldiers) or only rear rank (standing soldiers). By alternating firing between the front and rear ranks, 1 rank can fire whilst the other reloads.

Tiredness
If the soldiers have been in battle for some time they become tired and less effective. To restore their abilities the player must find water for the soldiers.

Injury
If a soldier's health is reduced to 50% or less their speed of movement is halved (walk pace only) until they either see a doctor or the player finds water for them.

Tiredness and Injury
The Zulu players are not restricted in their movements if they are injured or after constant movement.

Weapons
A player can play either a warrior class (armed with throwing spears) or the Sniper class where they are armed with a Martini Henry rifle.

Cross Hair and Weapon Sway
The throwable spear has a cross hair enabled and there is no weapon sway.
A Zulu player about to throw a spear with cross hair to help in aiming. 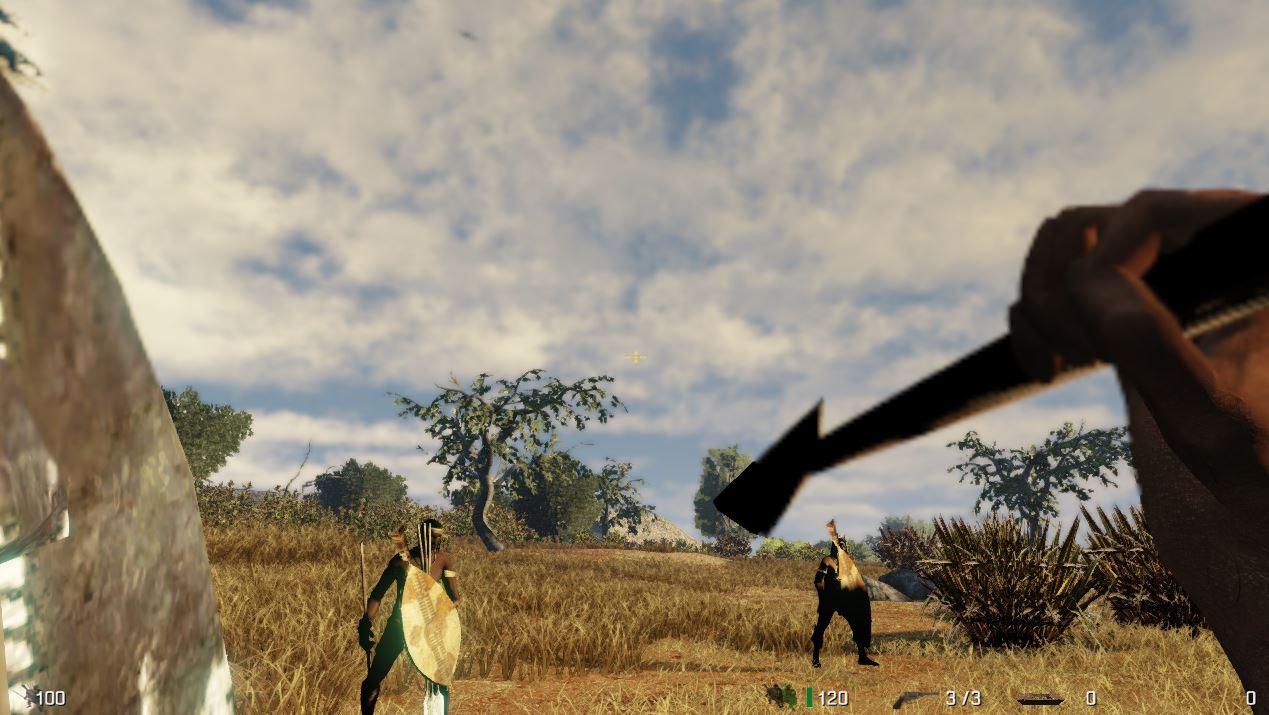 Impi Attacks
The Zulu players have an option at various times to order an attack with 30 additional warriors. These warriors are not under player control but will attack the target given then retreat after a set period of time. These attacks can be used tactically such as enable the player to attack on multiple fronts.

Tiredness
After constant movement the player will slow down and will be restricted to a walking pace. They need to have a short rest or find water to recover.

Injury
If the player's health reaches 50% or lower their movement becomes restricted. They need to find water or a doctor to recover.

Officer Class
If a player chooses the officer class he is armed with a Martini Henry rifle and Beaumont Adams revolver (cannot be reloaded).

NCO Class
The NCO class is only armed with a Martini Henry rifle but he has 20% more stamina and health
then an officer.

gonna be honest, between the hideous graphics and really quite lame models, this kinda looks really crappy... like Day One Garry's Incident level of crapness, i hope those PS2 textures and N64 models are just placeholders...

This is looking great guys, awesome idea too. You could really benefit from some ambient light to lighten up those dark shadows on your player models.

Best of luck with the project!